7 June 1861: “But if I was a whole crowd of fellows I could scarcely do all the things that they talk of setting me at.”

Posted on 7 Jun ’11 by Biff Hollingsworth

Item description: Letter, 7 June 1861, from Edward Porter Alexander to his wife Bettie. The letter describes Alexander’s activities at the beginning of the war including details on his responsibilities as an engineer and as organizer of the Confederate signal service. 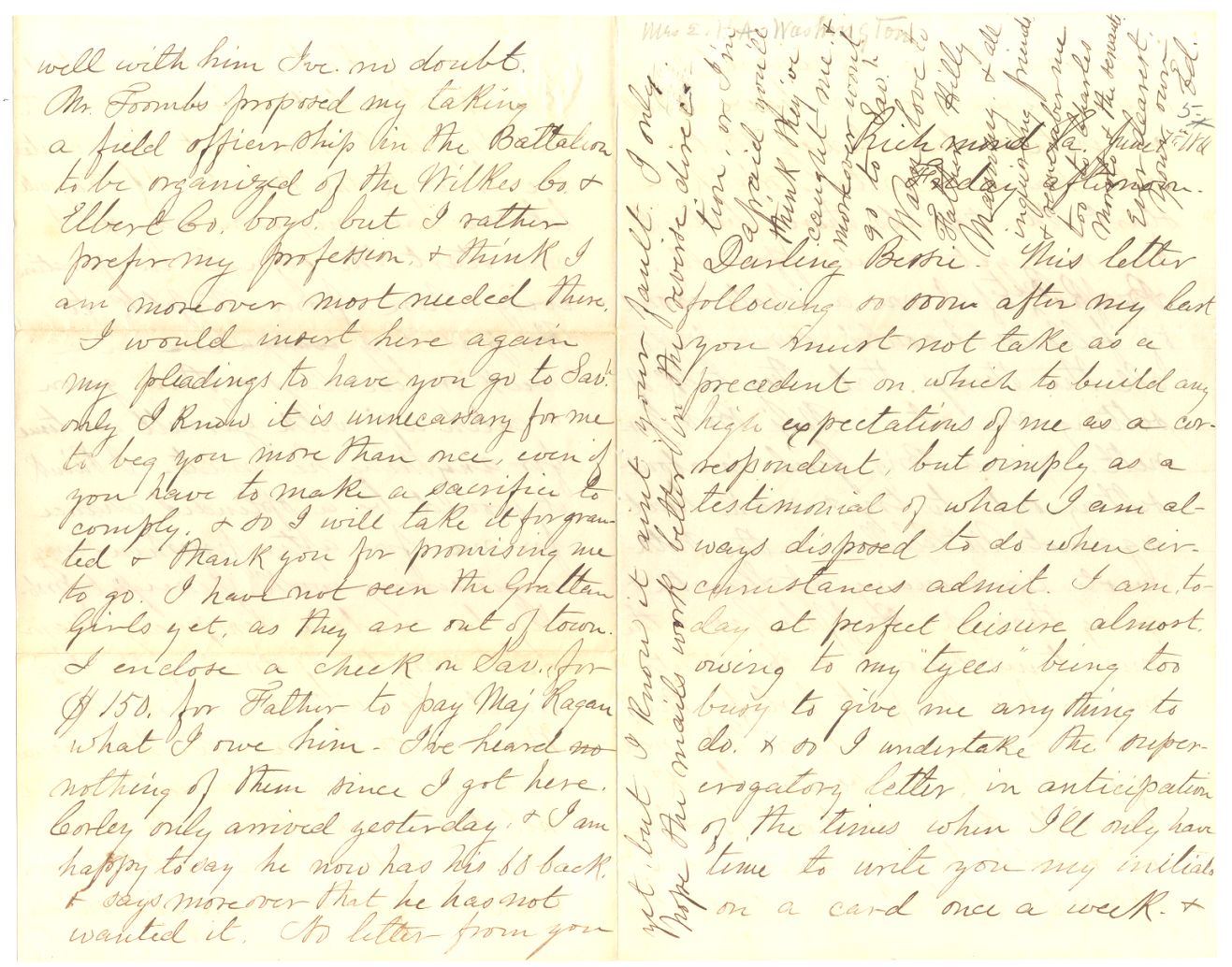 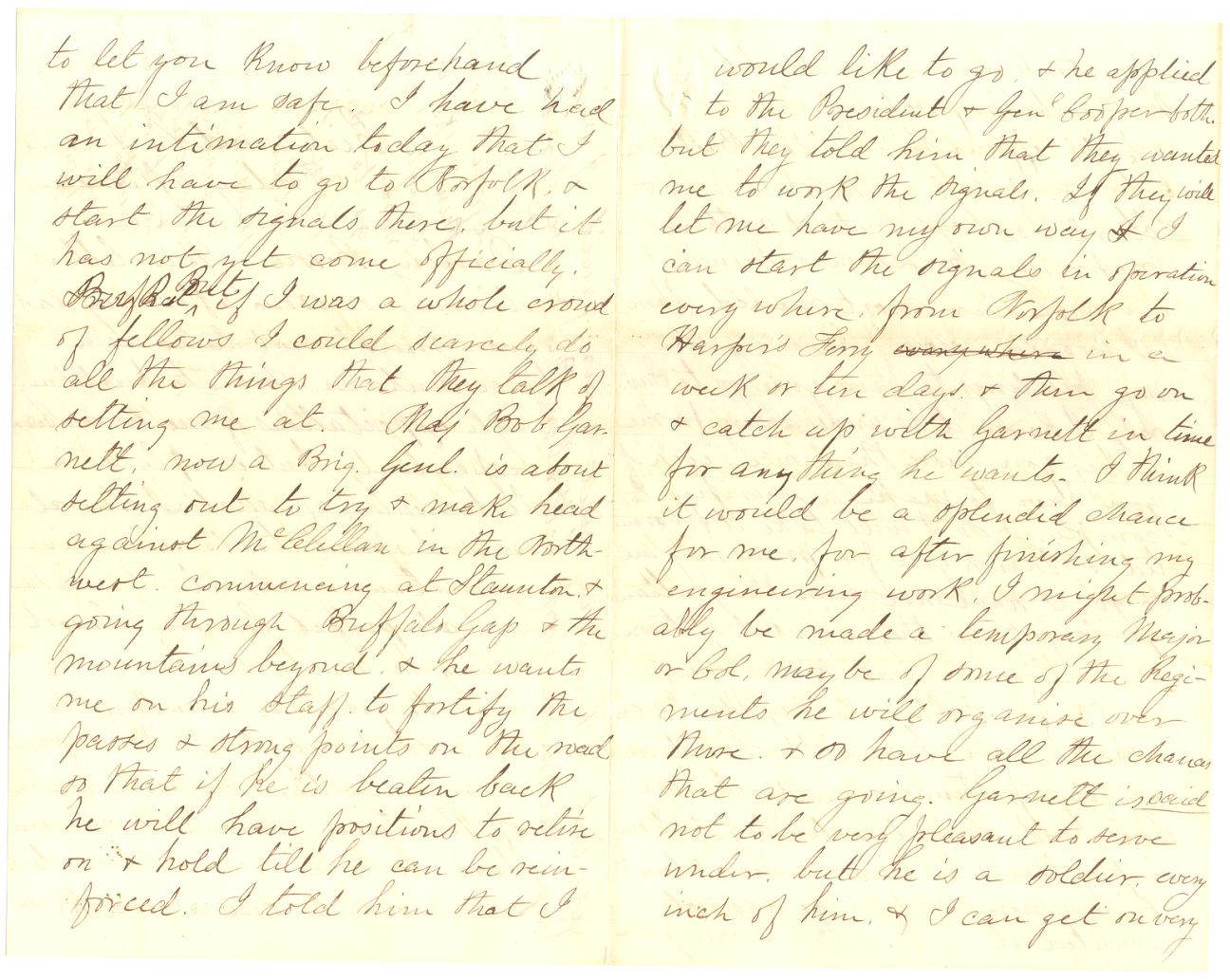 This letter following so soon after my last you must not take as a precedent on which to build any high expectations of me as a correspondent, but simply as a testimonial of what I am always disposed to do when circumstances admit. I am today at perfect leisure almost owing to my “[?]” being too busy to give me anything to do & so I undertake the supererogatory letter in anticipation of the times when I’ll only have time to write you my initials on a card once a week. & to let you know beforehand that I am safe. I have had an intimation today that I will have to go to Norfolk & start the signals there, but it has not yet come officially. But if I was a whole crowd of fellows I could scarcely do all the things that they talk of setting me at. Maj. Bob Garnett, now a Brig. Genl. is about setting out to try & make head against McClellan in the Northwest, commencing at Staunton & going through Buffalo Gap & the mountains beyond & he wants me on his staff to fortify the passes and strong points on the road so that if he is beaten back he will have positions to retire on & hold till he can be reinforced. I told him that I would like to go & he applied to the President & Gen. Cooper both, but they told him that they wanted me to work the signals. If they will let me have my own way I can start the signals in operation everywhere from Norfolk to Harper’s Ferry in a week or ten days & then go on & catch up with Garnett in time for anything he wants. I think it would be a splendid chance for me for after finishing my engineering work, I might probably be made a temporary Major or Col. maybe of some of the Regiments he will organize over there, & so have all the chances that are going. Garnett is said not to be very pleasant to serve under, but he is a soldier every inch of him & I can get on very well with him I’ve no doubt. Mr. Toombs proposed my taking a field officership in the Battalion to be organized of the Wilkes Co. and Elbert Co. boys but I rather prefer my profession & think I am moreover most needed there.

I would insert here again my pleadings to have you go to Savh. only I know it is unnecessary for me to beg you more than once even if you have to make a sacrifice to comply. & so I will take it for granted & thank you for promising me to go. I have not seen the Gratton(?) girls yet, as they are out of town. I enclose a check on Sav. for $150 for Father to pay Maj. Ragan what I owe him. I’ve heard nothing of them since I got here. Corley only arrived yesterday & I am happy to say he now has his 60 back & says moreover that he has not wanted it. No letter from you yet, but I know it ain’t your fault. I only hope the mails work better in the reverse direction, or I’m afraid you’ll think they’ve caught me & moreover won’t go to Savh.

Warm love to Father, Hilly, Manning & all inquiring friends & remember me too to Charles M[?] & the servants.

Ever dearest, your own,

[From a biography of Edward Porter Alexander from “The Civil War Trust.”]

Edward Porter Alexander was one of only three Confederate officers to rise to the rank of general in the artillery branch.  Respected by some of the Confederacy’s most important commanders, Alexander would participate in nearly every major campaign in the eastern theatre, contributing substantially to the army’s greatest successes and sharing in its bitterest defeats…[more… (links to external website]