12 July 1861: “Baggage must be reduced whenever a regiment receives marching orders and but one trip of the baggage waggons will be allowed from camp to the railroad.”

Posted on 12 Jul ’11 by Biff Hollingsworth 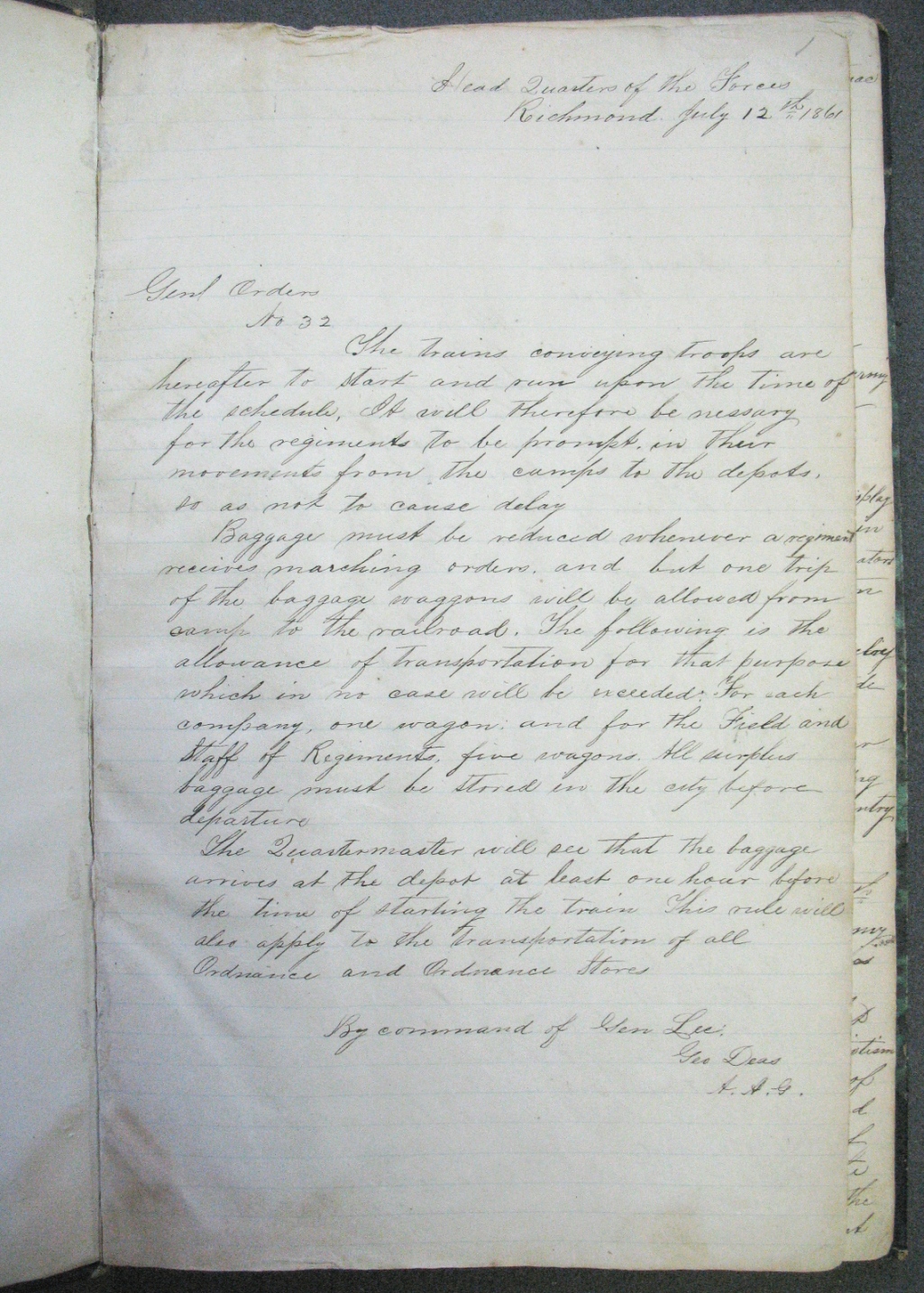 Head Quarters of the Forces

The trains conveying troops are hereafter to start and run upon the time of the schedule. It will therefore be nessary for the regiments to be prompt in their movements from the camps to the depots, so as not to cause delay.

Baggage must be reduced whenever a regiment receives marching orders and but one trip of the baggage waggons will be allowed from camp to the railroad. The following is the allowance of transportation for that purpose which in no case will be exceeded. For each company, one wagon, and for the Field and Staff of Regiments, five wagons. All surplus baggage must be stored in the city before departure.

The quartermaster will see that the baggage arrives at the depot at least one hour before the time of starting the train. This rule will also apply to the transportation of all ordinance and ordinance store.

By command of Gen. Lee.

The 21st North Carolina Infantry Regiment of the Army of the Confederate States of America was organized in Danville, Va., on 18 June 1861 as the 11th Regiment North Carolina Volunteers. The designation was changed to the 21st North Carolina Infantry Regiment in November 1861. William W. Kirkland of Orange County, N.C., was elected colonel on 3 July 1861. The Regiment was part of the Army of Northern Virginia. The collection consists of an order book with entries, 12 July 1861-6 April 1864. Orders were issued by Robert E. Lee, P. G. T. Beauregard, J. E. Johnston, I. G. Trimble, G. B. Crittenden, J. A. Early, R. S. Ewell, G. W. Smith, Stonewall Jackson, the secretary of war, and others. Orders concern troop movements, camp life, discharges, furloughs, and supplies, among other things. Included are Lee’s outline of the Confederate victory at Manassas, Va., and Beauregard’s order concerning General Butler’s treatment of women in New Orleans, La. There are also records of articles passed by the Confederate government and announcements of days of fasting and prayer issued by Jefferson Davis.