16 July 1861: “If that be true, I should be glad to hear some reasons assigned by gentlemen showing the power of the Congress of the United States, by joint resolution, to cure a breach of the Constitution or to indemnify the President against violations of the Constitution and the laws.”

Posted on 16 Jul ’11 by Biff Hollingsworth

Item description: Speech made by John C. Breckinridge, of Kentucky, in the United States Senate on 16 July 1861, later published in this volume.

Breckinridge served as Vice President under James Buchanan and, later, as United States senator from Kentucky, from March 4, 1861 until December 4, 1861 (the date on which he was expelled by resolution from the Senate for supporting the South). After leaving the Senate, Breckinridge joined the Confederate Army, where he attained the rank of major general and led the 1st Kentucky Brigade in several key battles in the western theater.

[Note: Due to the fragility of the original volume, which is preserved in the Rare Book Collection, we are unable to make scans from the original item. Instead, we provide a scan of the title page from an identical volume from the holdings of the Library of Congress.  Also, the volume has been digitized and made available online through the Internet Archive. Please click here to view the digitized version, where you may also read the full text of the volume.] 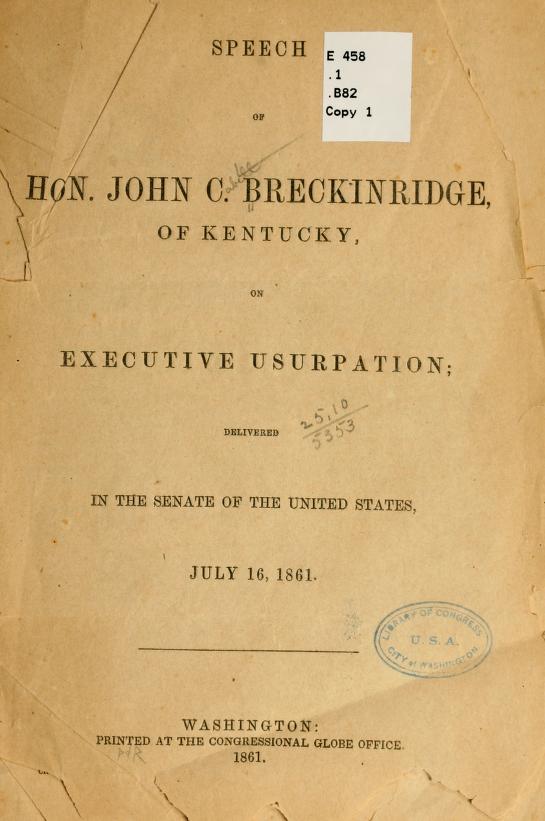 (Image from Library of Congress.)

The Senate having under consideration Joint Resolution

No. 1, to approve and confirm certain acts of the President

of the United States for suppressing insurrection and rebel-

Mr. President : The grounds of opposition to

the joint resolution now before the body have

been very fully stated by the Senator from Mis-

Powell.] I have heard no defense of this joint

resolution offered by the majority party in the

Chamber. Under ordinary circumstances I should

the subject as one of immense importance, I am

unwilling to see the resolution pass without a

brief expression of the reasons of my opposition

of the President done since the 4th of March last,

” All of the extraordinary acts, proclamations, and order.-,

herein before mentioned, be, and the same are hereby, ap-

proved and declared to be in all respects legal and valid,

to the same intent, and with the same effect, as if they had

been issued and done under the previous express authority

and direction of the Congress of the United States.”

The joint resolution would seem, upon the face

of it, to admit that the acts of the President were

not performed in obedience to the Constitution

and the laws. If that be true, I should be glad to

ing the power of the Congress of the United States,

by joint resolution, to cure a breach Of the Con-

stitution or to indemnify the President against

violations of the Constitution and the laws.

[Continue reading, via the Internet Archive.]