Posted on 22 Jul ’11 by Biff Hollingsworth

Item description: This letter, dated 22 July 1861, was written by Charles Hutson to his mother and father following the battle of Manassas. Hutson, recuperating from the wound he received, gives a vivid description of the first major battle of the Civil War. 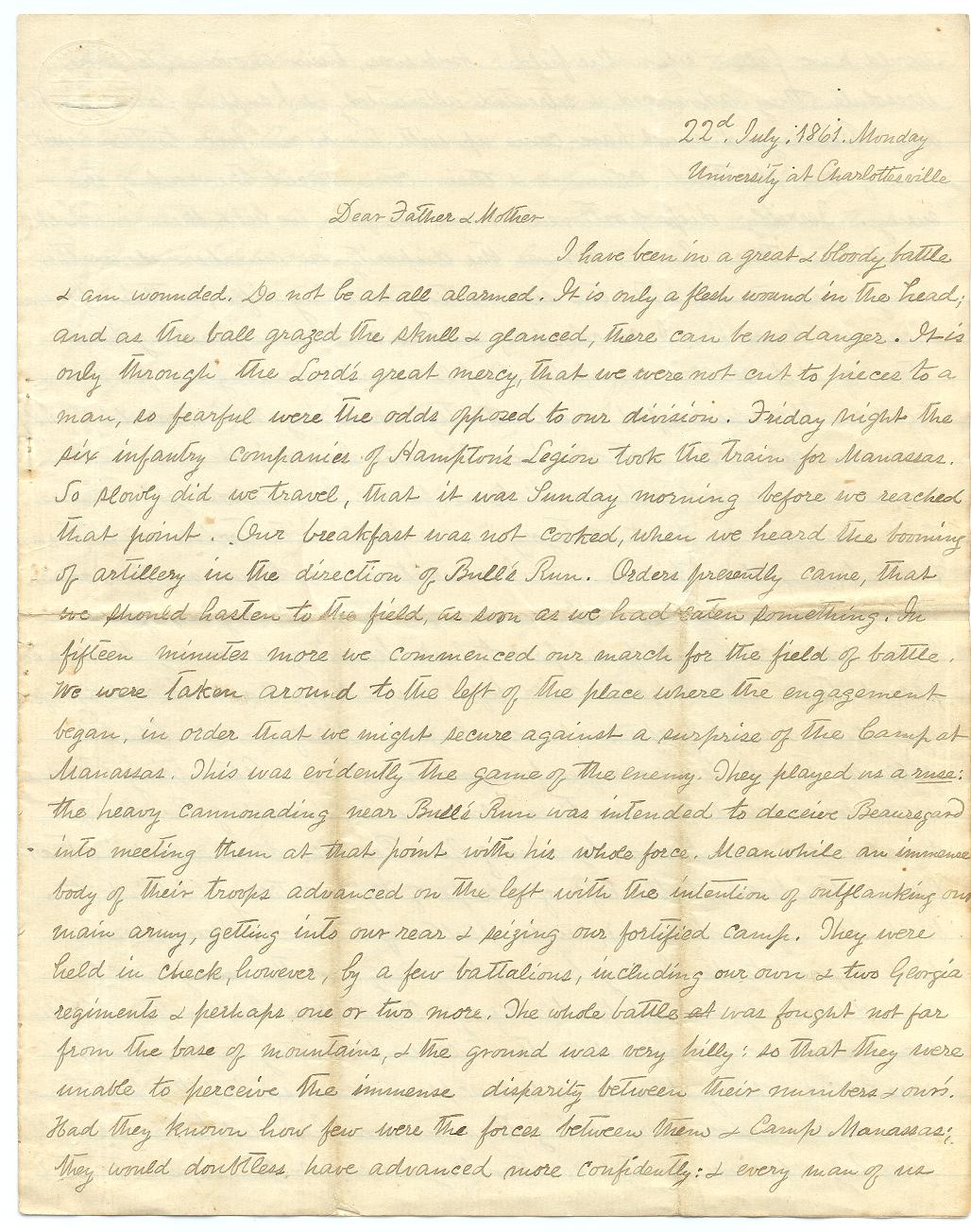 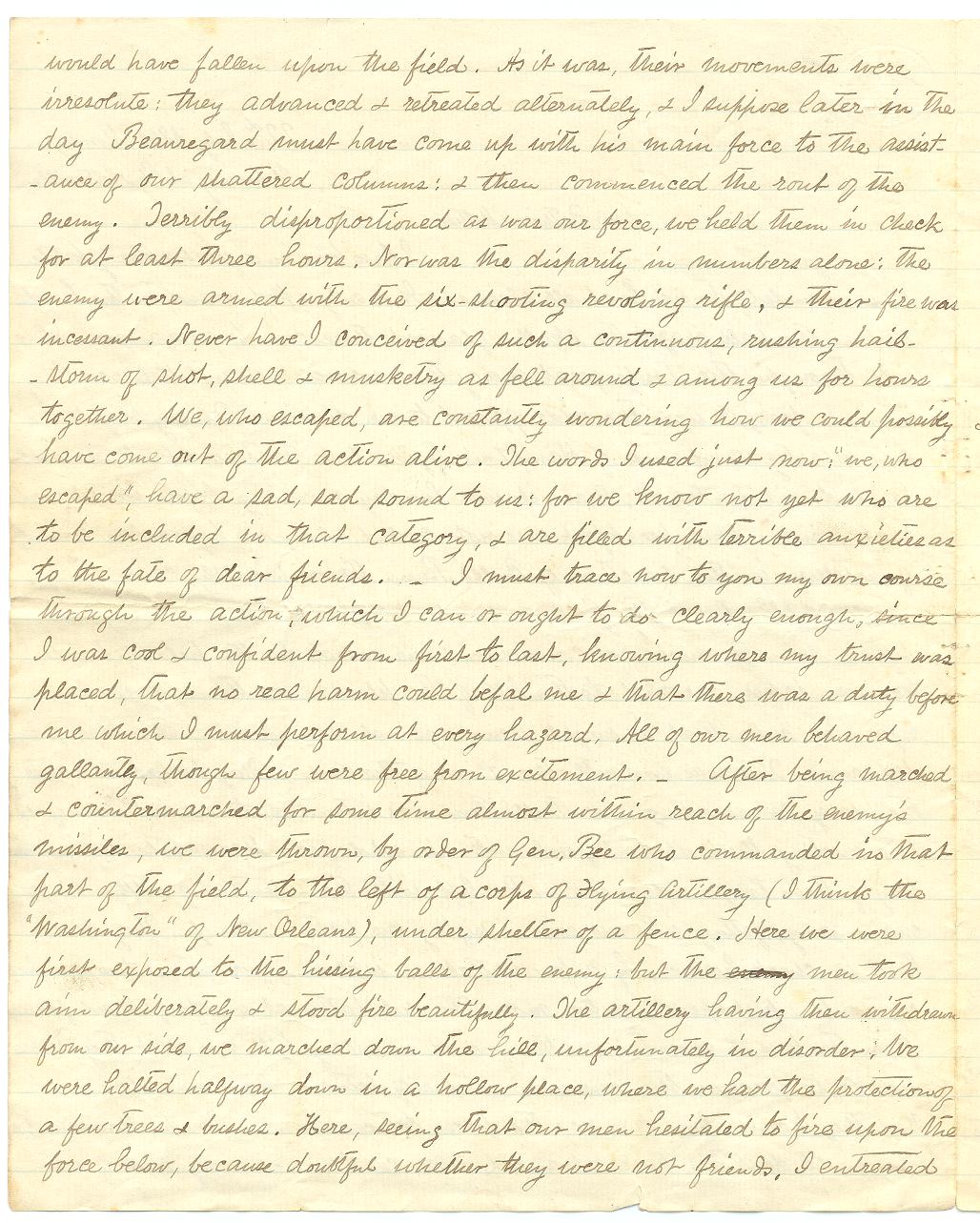 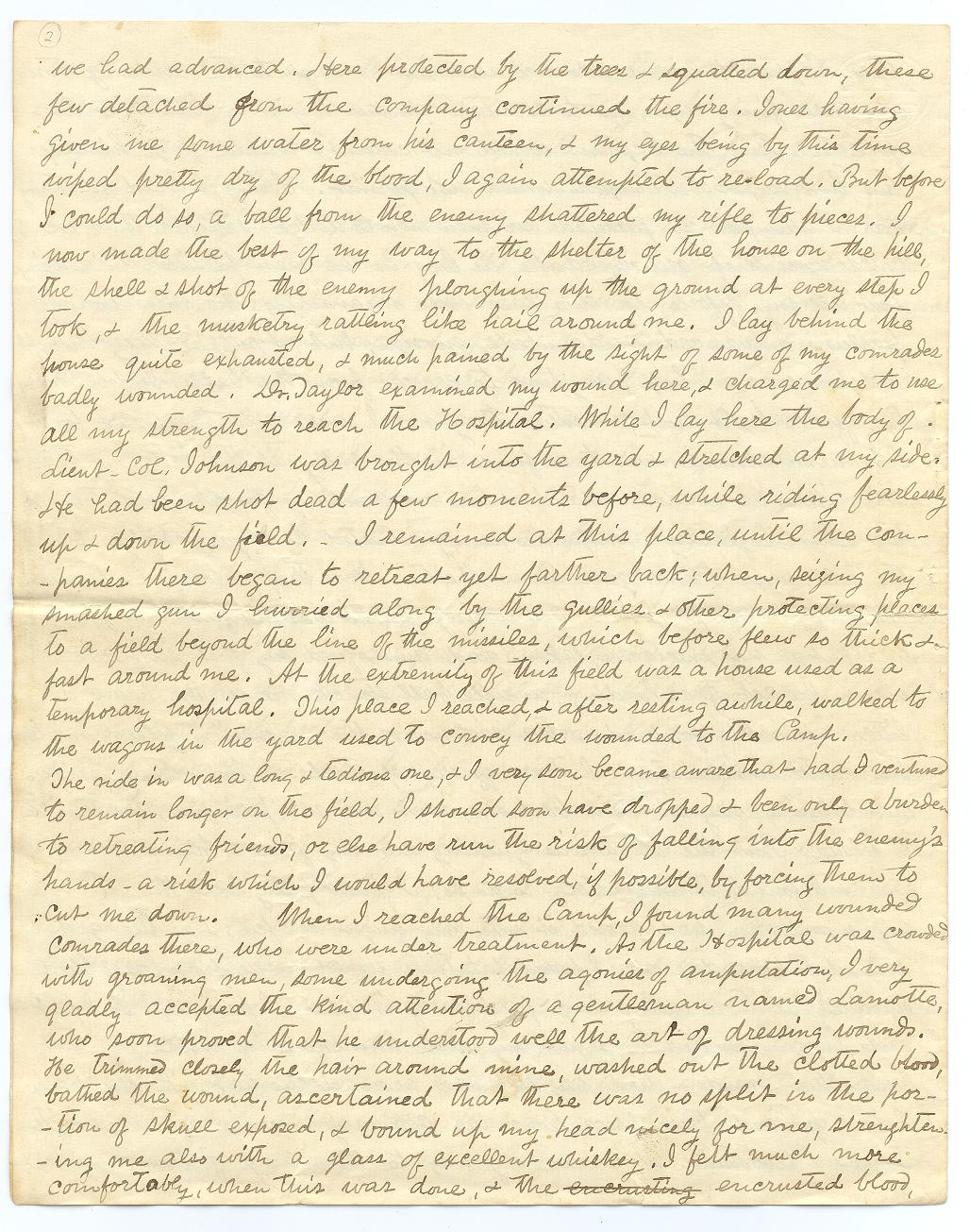 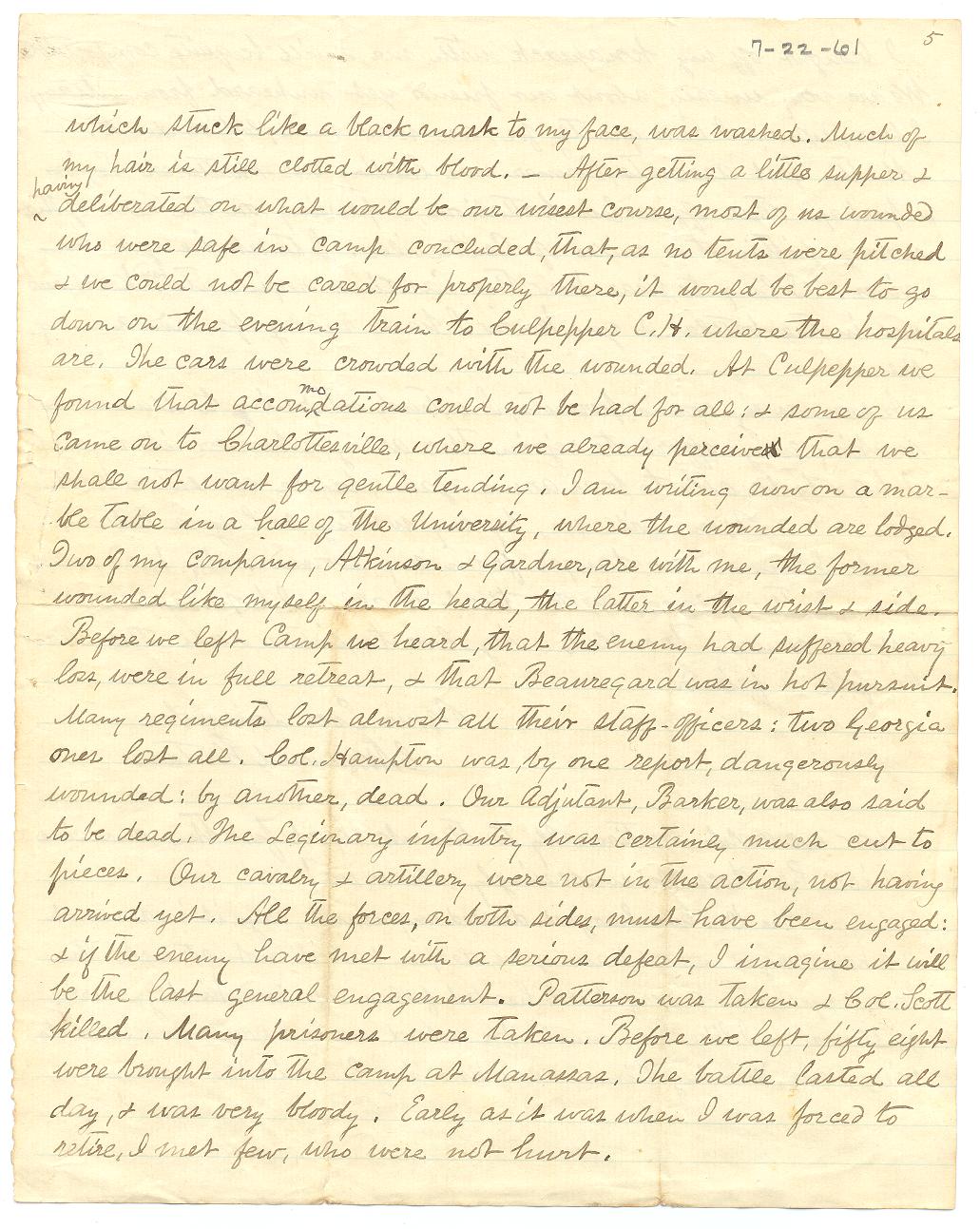 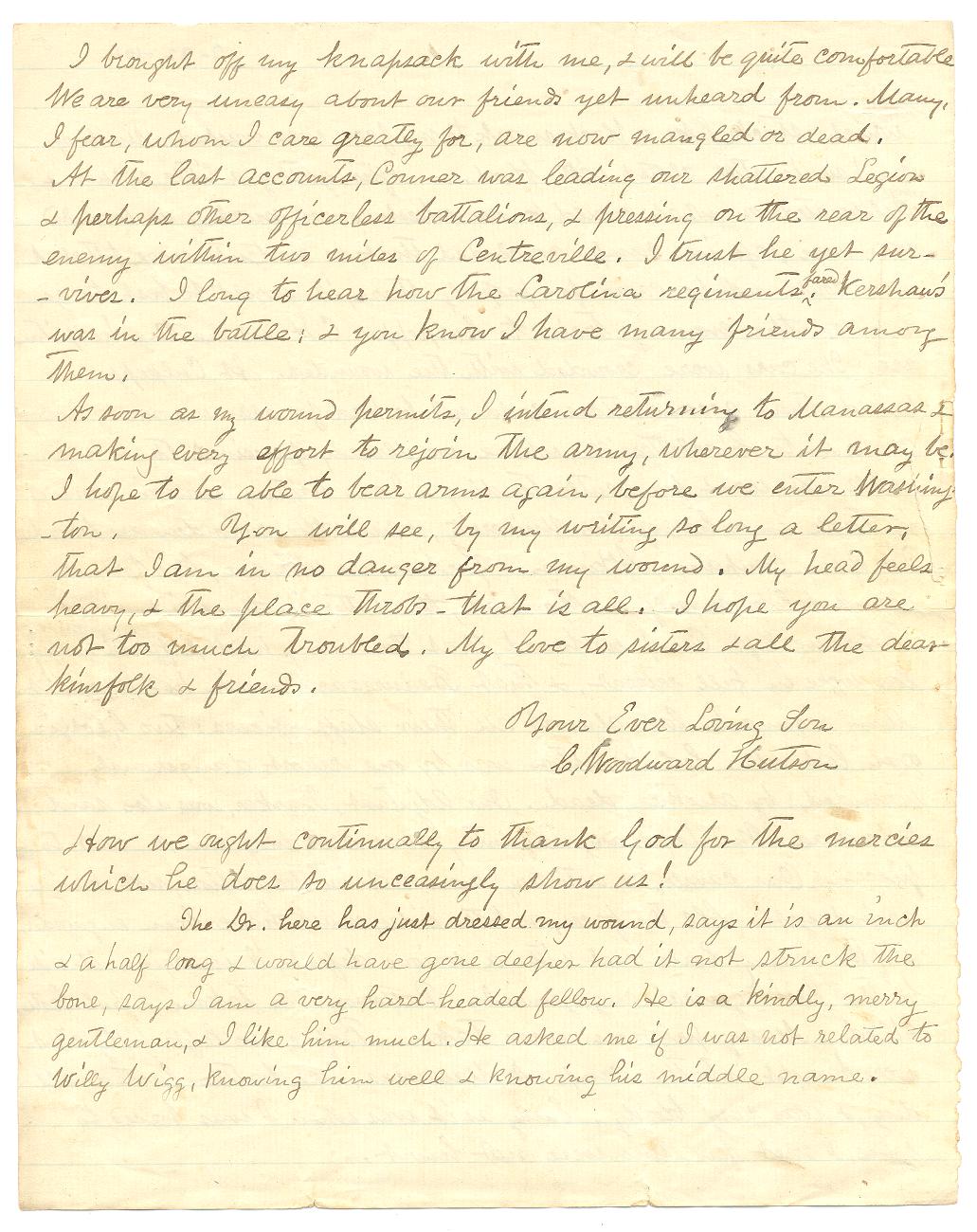 I brought off my knapsack with me, & will be quite comfortable. We are very uneasy about our friends yet unheard from. Many, I fear, whom I care greatly for, are now mangled or dead. At the last accounts, Conner was leading our shattered Legion & perhaps other officerless battalions, & pressing on the rear of the
enemy within two miles of Centreville. I trust he yet survives. I long to hear how the Carolina regiments fare. Kershaw’s was in the battle; & you know I have many friends among them.
As soon as my wound permits, I intend returning to Manassas & making every effort to rejoin the army, wherever it may be. I hope to be able to bear arms again, before we enter Washington. You will see, by my writing so long a letter that I am in no danger from my wound. My head feels heavy, & the place throbs, that is all. I hope you are not too much troubled. My love to sisters & all the dear kinsfolk & friends.

How we ought continually to thank God for the mercies which he does so inceasingly show us! The Dr. here has just dressed my wound, says it is an inch & a half long & would have gone deeper had it not struck the bone, says I am a very hard-headed fellow. He is a kindly, merry gentleman, & I like him much. He asked me if I was not related to Willy Wigg, knowing him well & knowing his middle name.