23 July 1861: “The bushes seemed to be alive with the rebels (judging from their firing for we never saw one of them at any time we were there) their first volley was the most murderous to us.”

Posted on 23 Jul ’11 by Biff Hollingsworth

Item description: Letter, 23 July 1861, from William Ray Wells, private in the 12th New York Infantry Regiment (“Onondaga Regiment”). In this letter wells describes his involvement in fighting near Centreville, Va., as part of the larger Battle of Bull Run. Wells also describes how he became separated from his regiment during the march back to Washington, D.C.

Also note that this letter was written inside the United States Capitol. During this early period of the war, many federal troops were stationed inside the capitol building, which was unfinished at the time. For more information about the use of the capitol as a barracks, please see Guy Gugliotta’s recent essay on the New York Times blog, Disunion. 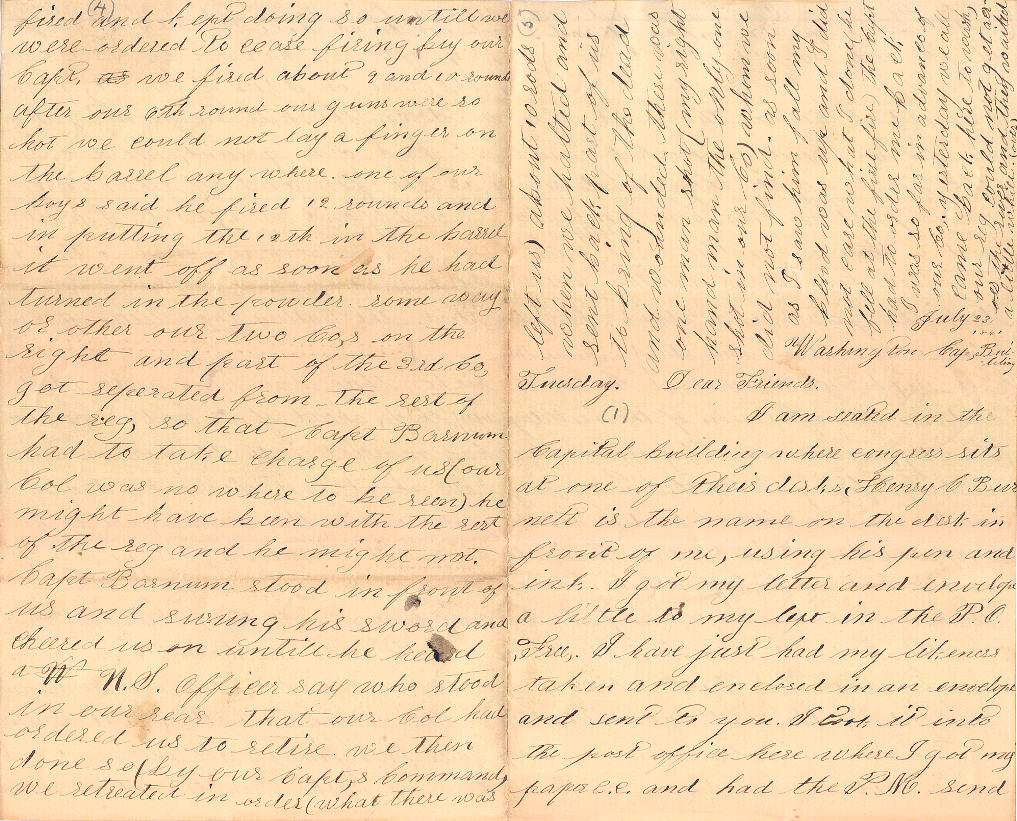 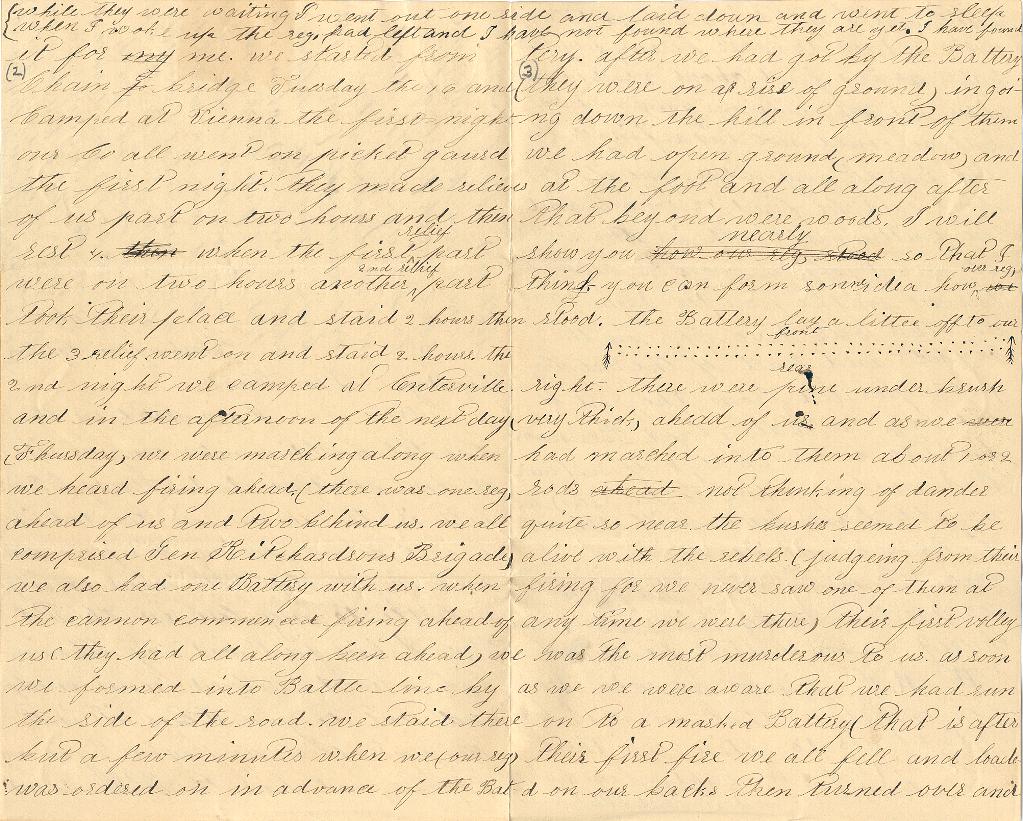 I am seated in the Capital building where congress sits at one of their desks (Henry C. Burnett is the name on the desk in front of me, using his pen and ink. I got my letter and envelope a little to my left in the P.O., Free. I have just had my likeness taken and enclosed in an envelope and sent to you. I took it into the post office here where I got my paper, &c. and had the P.M. send it for me. We started from Chain Bridge Tuesday the 16 and camped at Vienna the first night. One Co. all went on picket guard the first night. They made relieves of us part on two hours and then rest 4. When the first part were on two hours another 2nd relief part took their place and staid 2 hours then the 3 relief went on and staid 2 hours. The 2nd night we camped at Centreville and in the afternoon of the next day (Thursday) we were marching along when we heard firing ahead (there was one reg. ahead of us and two behind us. we all comprised Gen. Ritchardsons Brigade. We also had one Battery with us. When the cannon commenced firing ahead of us, they had all along been ahead, we we formed into Battle line by the side of the road. We staid there but a few minutes when we (our reg.) was ordered on in advance of the Battery. After we had got by the Battery (they were on a rise of ground) in going down the hill in front of them we had open ground (meadow) and at the foot and all along after that beyond were roads. I will show you nearly so that I think you can form some idea how our reg. stood. The battery lay a little off to our right. [see drawing] There were pine under brush (very thick) ahead of us and as we had marched into them about 1 or 2 [rods?] ahead not thinking of [danger?] quite so near. The bushes seemed to be alive with the rebels (judging from their firing for we never saw one of them at any time we were there) their first volley was the most murderous to us. As soon as we were aware that we had run on to a mashed Battery (that is after their first fire we all fell and loaded on our backs. Then turned over and fired and kept doing so untill we were ordered to cease firing by our Capt. We fired about 9 and 10 rounds after our 6th round our guns were so hot we could not lay a finger on the barrel any where. One of our boys said he fired 12 rounds and in putting the 12th in the barrel it went off as soon as he had turned in the powder. Some way or other our two Co.s on the right and part of the 3rd. Co. got separated from the rest of the reg. so that Capt. Barnum had to take charge of us (our Col. was no where to be seen) he might have been with the rest of the reg. and he might not. Capt. Barnum stood in front of us and swung his sword and cheered us on untill he heard a N.S. Officer say who stood in our rear that our Col. had ordered us to retire. We then done so (by our Capt.s command) we retreated in order (what there was left us) about 10 rods when we halted and sent back part of us to bring of the dead and wounded. There was one man shot (my right hand man the only one shot in our Co.) whom we did not find. As soon as I saw him fall my blood was up and I did not care what I done (he fell at the first fire) the Capt. had to order me back. I was so far in advance of our Co. yesterday we all came back here to Wash. Our reg. could not get across the river and they waited a little while. While they were waiting I went out one side and laid down and went to sleep. When I woke up the reg. had left and I have not found where they are yet. I have found once in a while some of our reg. who have got strayed away from the reg. and that is all. When I woke up I enquired of some one standing around there if he knew where our reg. had gone and he said they had gone over the river into Washington. I then came to the gaurd one that was gaurding the bridge and asked him and he also said they had. I then came across (it was raining all this time) and put up in a hotell just in this end of the bridge. There is a Co. quartered there. I slept on the bare floor with nothing for a pillow and was very glad to get even a shelter for my head. Today I have heard that our reg. were at Arlington Heights. That is on the other side and up the river 7 miles. I think of taking a start (John Wells is with me) and go there as soon as I finish this letter. It is now 5 o’clock and I shall have to close if I go there to night. It cleared of this morning quite pleasant, but I must close.

I read a letter from Mary while on the battle field. I have not heard from any of the rest of you since the 5th your letter was dated. I have plenty writing papers on hand. Do not send any more.

2 Responses to 23 July 1861: “The bushes seemed to be alive with the rebels (judging from their firing for we never saw one of them at any time we were there) their first volley was the most murderous to us.”