31 July 1861: “Students who were with us at the opening of the present year are now to be found in arms under the banners of every State in the Confederacy…”

Posted on 31 Jul ’11 by Biff Hollingsworth

Item description: Circular letter, 31 July 1861, from UNC President David Swain to students discouraging them from enlisting in the Confederate Army.  Since 1795, he writes, nothing had occurred to cause the university to close, and he did not anticipate such an event “at the present time.” 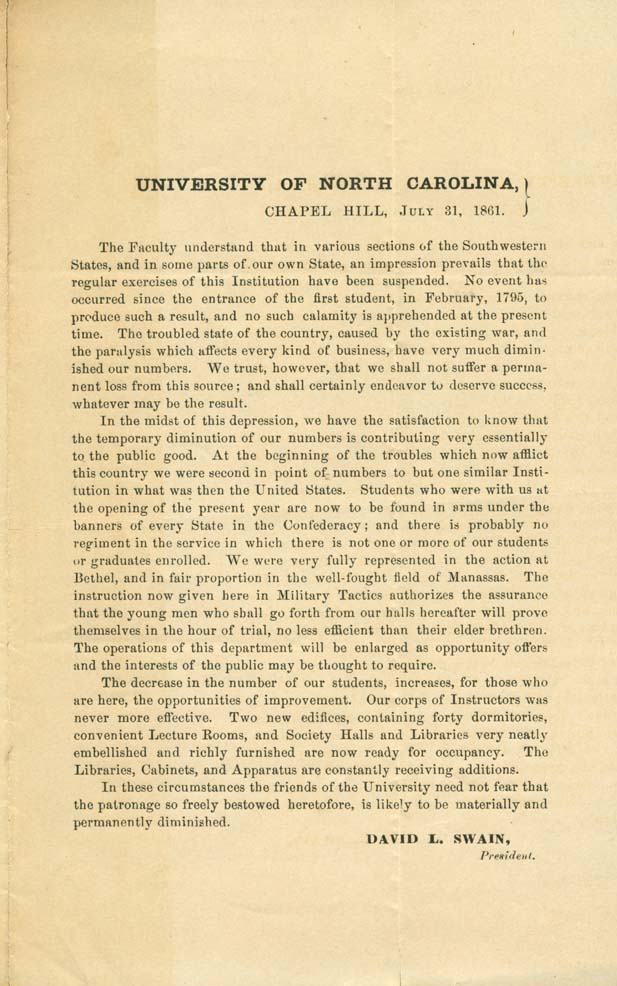 More about UNC President David Swain: David Lowry Swain (1801-1868) was the youngest son of Caroline Lane and George Swain, a farmer. He was born in Buncombe County, NC, and educated at Newton Academy in Asheville, NC. He was admitted to the junior class at the University in 1821 but remained only one week. Reluctant to spend his parents’ scarce resources, he went to Raleigh to read law under Chief Justice John Louis Taylor, then returned to Asheville in 1823 to begin his law practice. He married Eleanor White in 1826; they became the parents of three sons, two of whom died in infancy, and two daughters. Buncombe County voters sent Swain to the NC House of Commons four times between 1824 and 1829, when the legislature appointed him judge of the superior court. In 1832 Swain became governor, a role that allowed him to represent western North Carolina interests; promote internal improvements such as roads, railroads, and schools; and reform the state’s constitution by bringing together in 1835 a coalition of the state’s Whigs and Democrats. Despite his political success, the predominantly Democratic General Assembly of 1835, the last to elect North Carolina’s governor, denied Swain a fourth one-year term. He became president of the University in 1835, a position he held until his death in 1868 (Dictionary of North Carolina Biography 5:483-86). Students referred to Swain as “the Governor” or as “Old Bunk.”