7 August 1861: “the Yankees came down and crossed on our side then we knew that our men were giving way and we fell sad but our Col came by us and said Beauregard is with them boys that one sentance gave us confidance again and we knew if he was with them all would be right…”

Item description: James Keen Munnerlyn, Jr., was born in Georgetown, S.C., in 1840. He served, 1860-1862, in the Palmetto Guard, 2nd South Carolina Regiment, and sometime between 15 July 1862 and 8 September 1862, he was transferred to the Georgia Hussars, Jeff Davis Legion, Stuart’s Cavalry, Army of Northern Virginia. Munnerlyn died in 1922.

In 7 August 1861, Munnerlyn recounts to his sister his experience at the Battle of Bull Run. He includes details about the fighting, dealing with sickness in the camp, and African Americans performing chores in the camp for the soldiers. 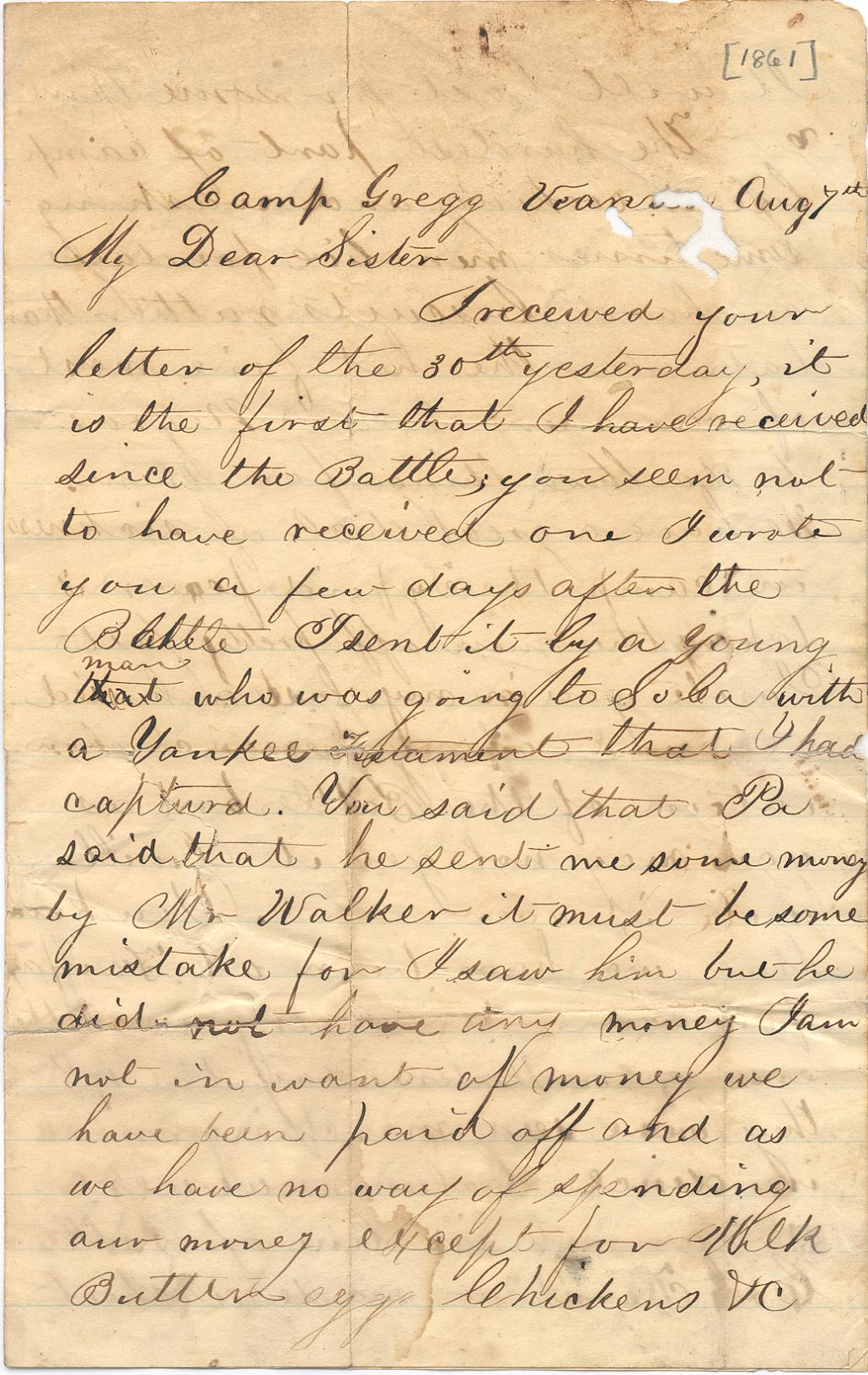 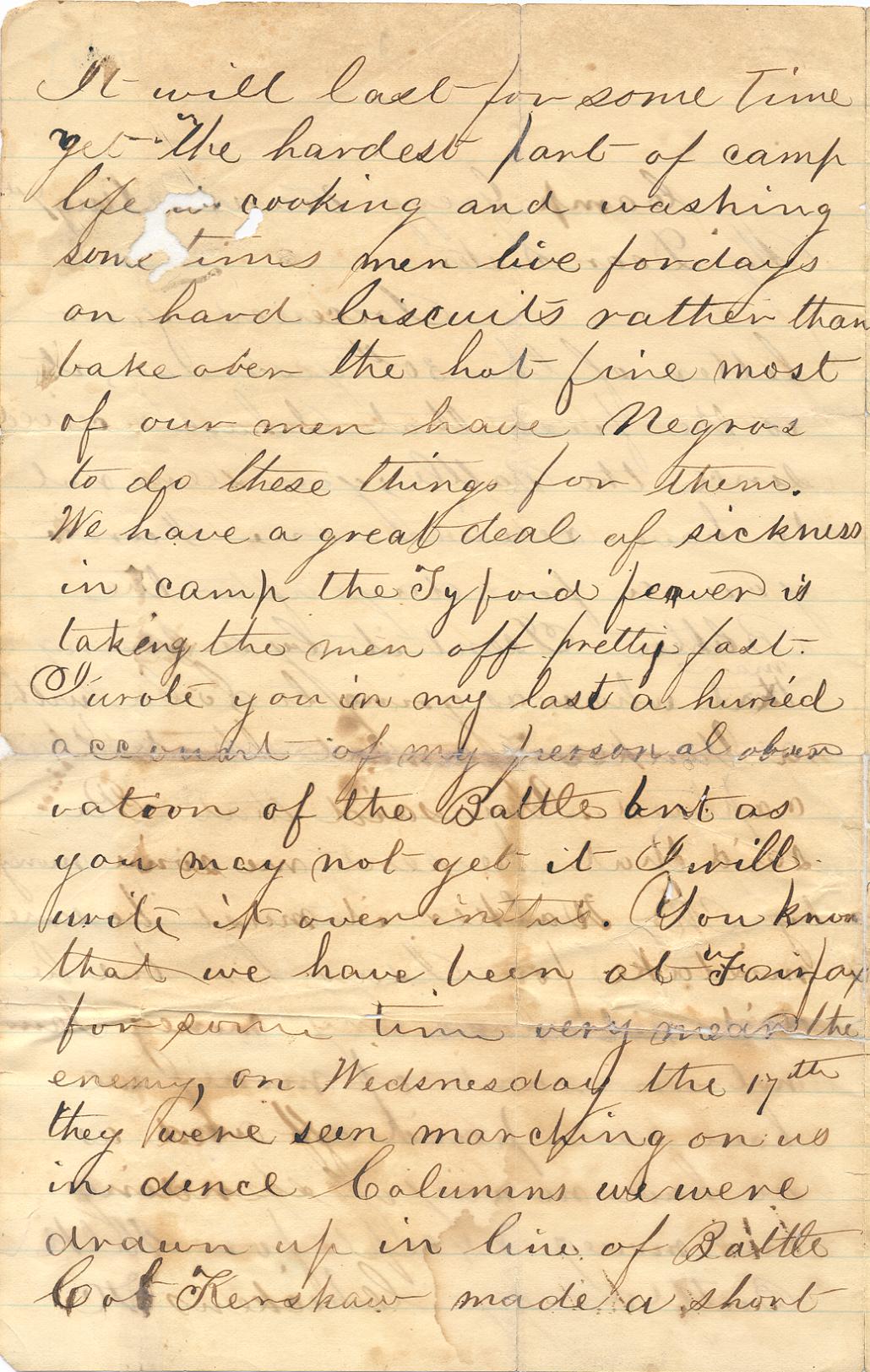 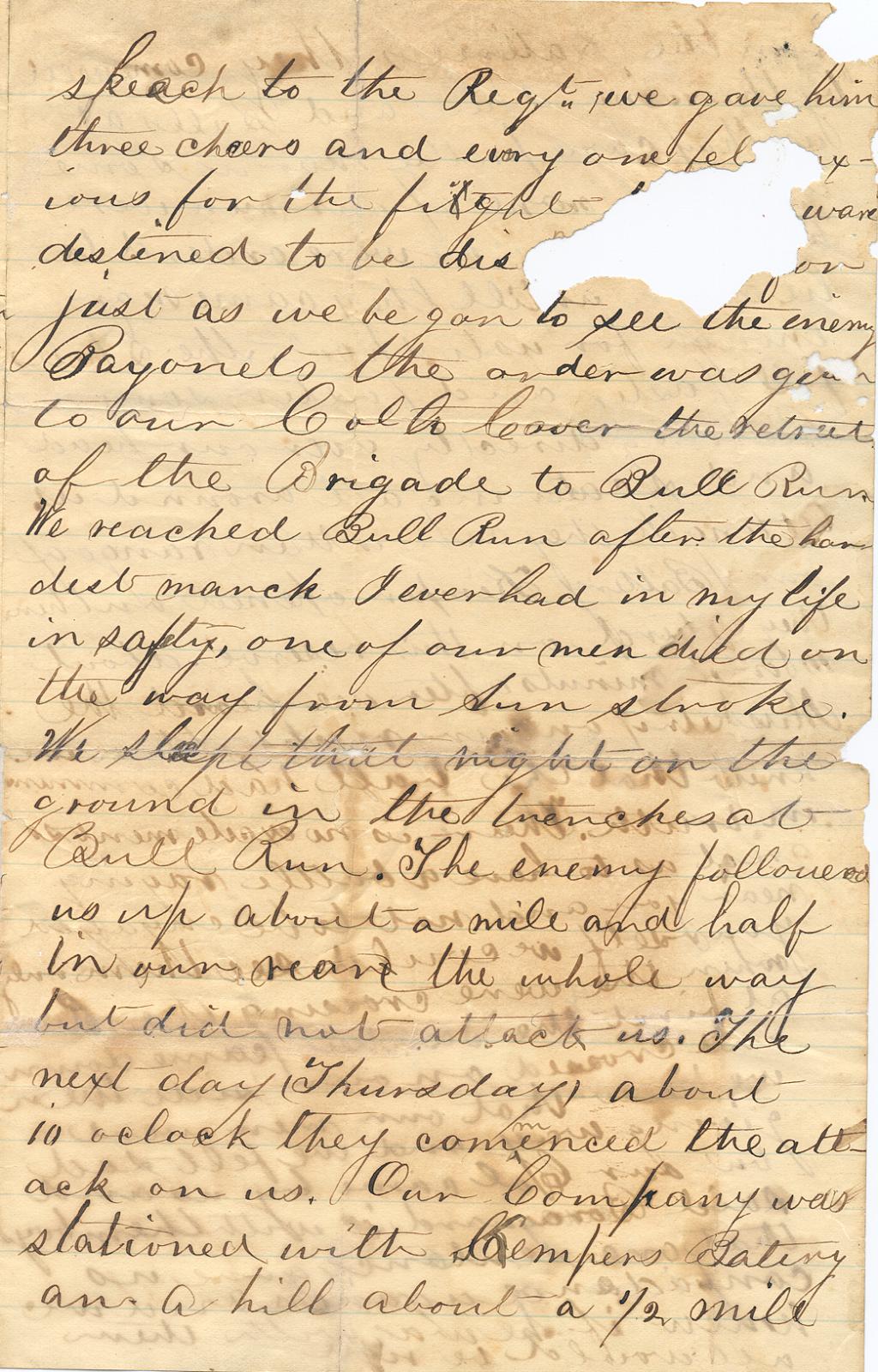 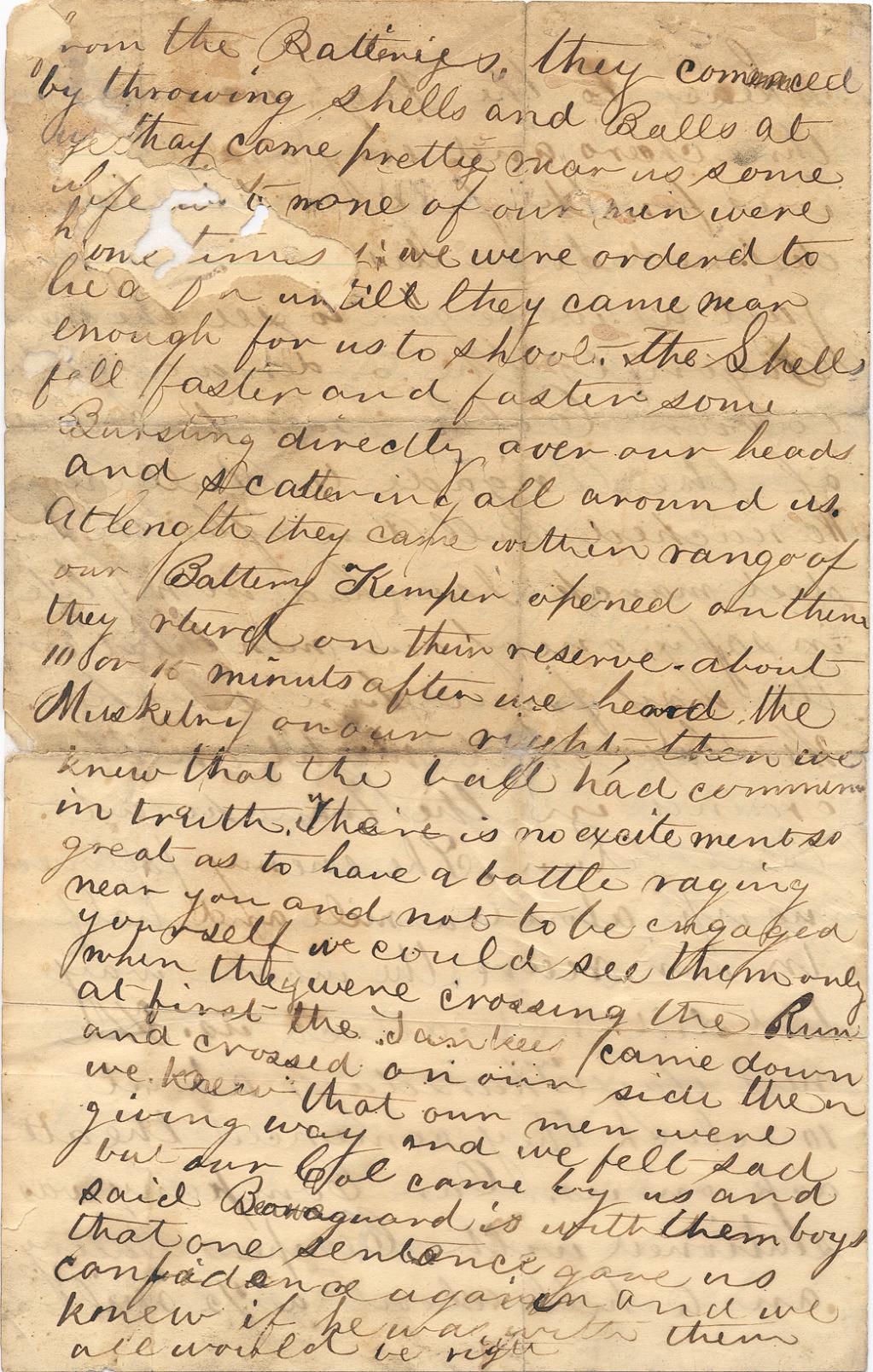 I received your letter of the 30th yesterday, it is the first that I have received since the Battle, you seem not to have received one I wrote you a few days after the Battle I sent it by a young man who was going to So Ca [South Carolina] with a Yankee Testament that I had captured. You said that Pa said that he sent me some money by Mr Walker it must be some mistake for I saw him but he did not have any money I am not in want of money we have been paid off and as we have no way of spending our money except for Milk Butter eggs Chickens [illegible] It will last for some time yet – the hardest part – of camp life [illegible] cooking and washing sometimes men live for days on hard biscuits rather than bake over the hot fire most of our men have Negros to do these things for them. We have a great deal of sickness in camp the Tyfoid fever is taking the men off pretty fast. I wrote you in my last a hurried account of my personal observation of the Battle but as you man not get it I will write it over in this. You know that we have been at Fairfax for some time very mean the enemy, on Wednesday the 17th they were seen marching on us in dence Columns we were drawn up in line of Battle Col. Kenshaw made a short speech to the Regt, we gave him three cheers and every one felt anxious for the fight [missing piece of letter]… are destined to be [missing piece of letter] just as we be gon to see the enemy bayonets the order was given to our Col to Cover the retreat of the Brigade to Bull Run. We reached Bull Run after the hardest march I ever had in my life in safety, one of our men died on the way from Sun stroke. We slept that night on the ground in the trenches at Bull Run. The enemy followed us up about a mile and half in our rear the whole way but did not attack us. The next day (Thursday) about 10 oclock they commenced the attack on us. Our Company was stationed with Kemper Batery an a hill about 1/2 mile from the Batterys, they commenced by throwing shells and Balls at us that came pretty near us some [missing piece of letter] none of our ment were [missing piece of letter] we were ordered to be [missing piece of letter] until they came near enough for us to shoot. The Shells fell faster and faster some Bursting directly over our heads and scattering all around us. At length they came within range of our Battery Kemper  opened on them they [returned] on their reserve. about 10 or 15 minuts after we heard the Musketing on our own right – then we knew the ball had commenced in truth. There is no excitement so great as to have a battle raging near you and not to be engaged yourself we could see them only when they were crossing the Run at first – the Yankees came down and crossed on our side then we knew that our men were giving way and we fell sad but our Col came by us and said Beauregard is with them boys that one sentance gave us confidance again and we knew if he was with them all would be right