9 August 1861: “We are all wishing for peace, perfectly satisfied with our one battle, & rather weary of rigid discipline in an uninviting country, where we have no great occupation.”

Posted on 9 Aug ’11 by Biff Hollingsworth

Item description: Recovering from the head wound received at the Battle of First Bull Run (First Manassas), Charles Woodward Hutson writes this letter to his mother to update her on his recovery.  Hutson also reflects on the new perspective coming from his recent experiences, “I have had much to be grateful for this year, an eventful one for me: & I wonder often at myself that I do not oftener rise to a real & earnest appreciation of the kindness of God & the good friends he has given me.” 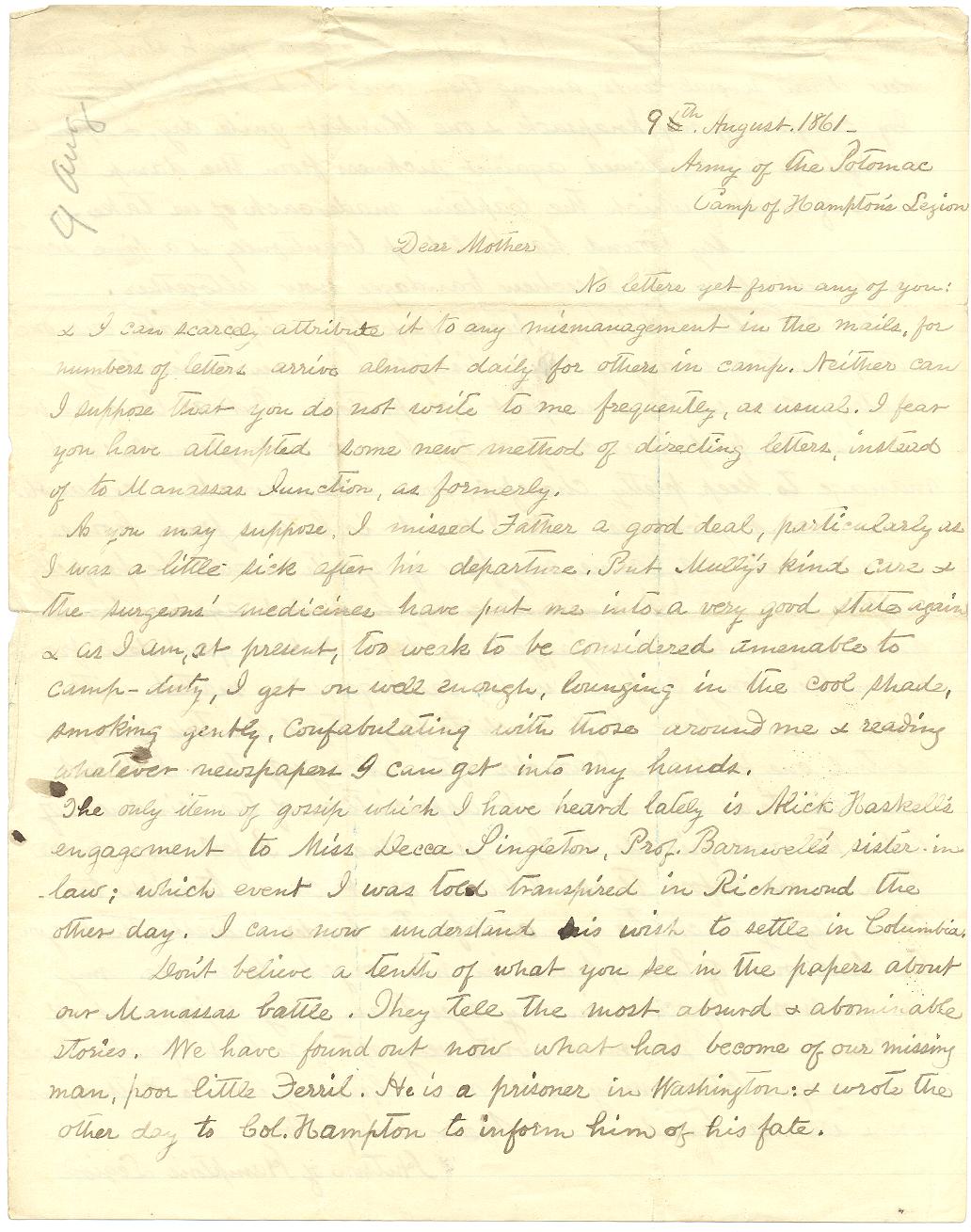 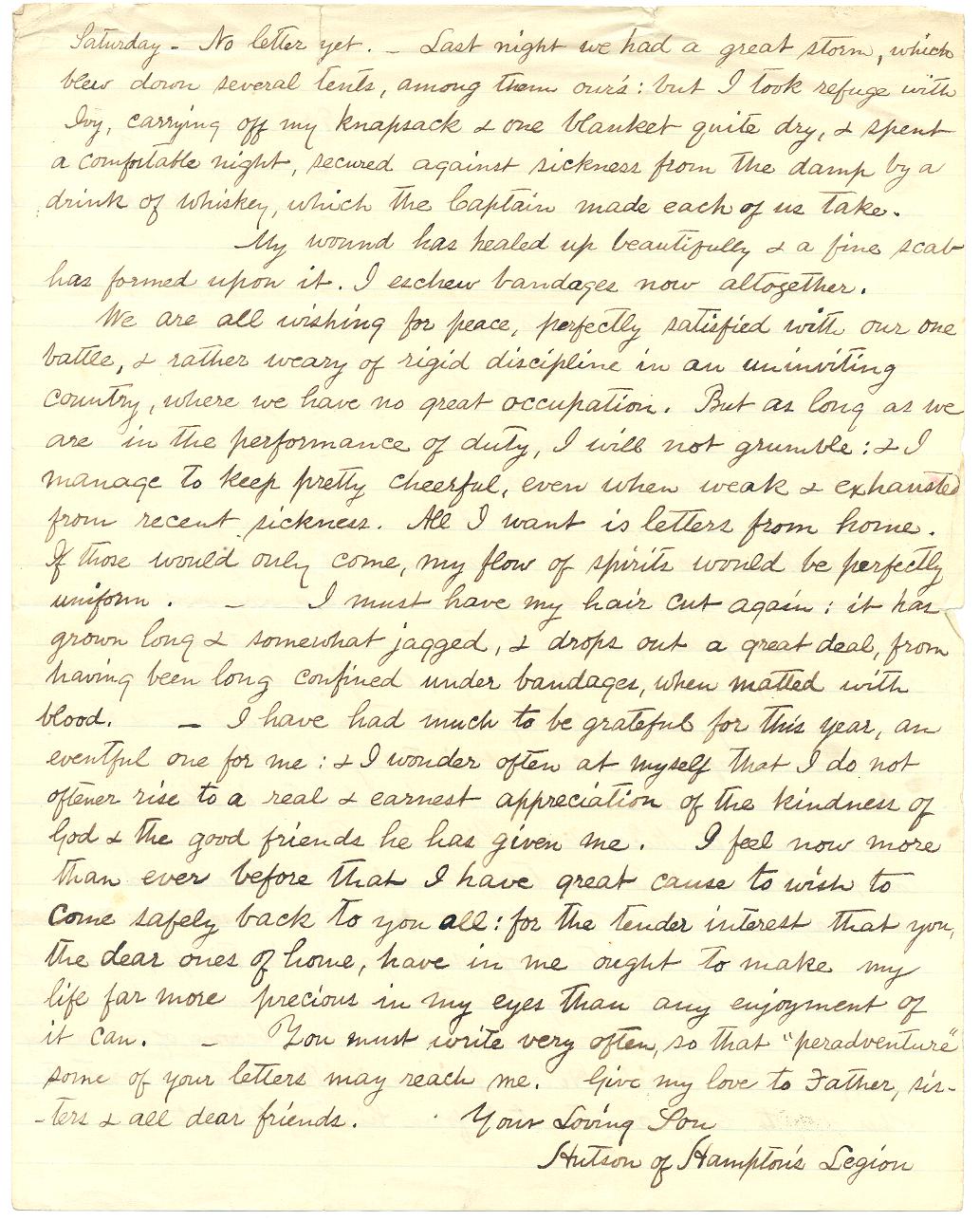 No letter yet from any of you! & I can scarcely attribute it to any mismanagement in the mails, for numbers of letters arrive almost daily for others in camp. Neither can I suppose that you do not write to me frequently, as usual. I fear you have attempted some new method of directing letters, instead of to Manassas Junction, as formerly.

As you may suppose, I missed Father a good deal, particularly as I was a little sick after his departure. But Mully’s kind care & the surgeon’s medicines have put me into a very good state again & as I am at present, too weak to be considered amenable to camp duty, I get on well enough, lounging in the cool shade, smoking gently, confabulating with those around me & reading whatever newspapers I can get into my hands.

The only item of gossip which I have heard lately is Alick Haskell’s engagement to Miss Decca Singleton, Prof. Barnwell’s sister-in-law; which event I was told transpired in Richmond the other day. I can now understand his wish to settle in Columbia.

Don’t believe a tenth of what you see in the papers about our Manassas battle. They tell the most absurd & abominable stories. We have found out now what has become of our missing man, poor little Ferril. He is a prisoner in Washington: I wrote the other day to Col. Hampton to inform him of his fate.

Saturday – No letter yet. – Last night we had a great storm, which blew down several tents, among them our’s: but I took refuge with Ivy, carrying off my knapsack & one blanket quite dry, & spent a comfortable night, secured against sickness from the damp by a drink of whiskey, which the Captain made each of us take.

My wound has healed up beautifully & a fine scab has formed upon it. I eschew bandages now altogether.

We are all wishing for peace, perfectly satisfied with our one battle, & rather weary of rigid discipline in an uninviting country, where we have no great occupation. But as long as we are in the performance of duty, I will not grumble: & I manage to keep pretty cheerful, even when weak & exhausted from recent sickness. All I want is letters from home. If those would only come, my flow of spirits would be perfectly uniform.  _  I must have my hair cut again: it has grown long & somewhat jagged, & drops out a great deal from having been long confined under bandages, when matted with blood.   _ I have had much to be grateful for this year, and eventful one for me: & I wonder often at myself that I do not oftener rise to a real & earnest appreciation of the kindness of God & the good friends he has given me.  I feel now more than ever before that I have great cause to wish to come safely back to you all: for the tender interest that you, the dear ones of home, have in me ought to make my life far more precious in my eyes than any enjoyment of it can.   _ You must write very often, so that “peradventure” some of your letters may reach me. Give my love to Father, sisters & all dear friends.