10 August 1861: “[Kentucky] has elected a large majority of Union men to her legislature…”

Posted on 10 Aug ’11 by Biff Hollingsworth

Item description: Letter of 10 August 1861 from Given Campbell to his wife Bettie describing the political divisions in Kentucky at the outset of the Civil War, particularly the news surrounding the August 1861 elections for Kentucky’s state legislature. 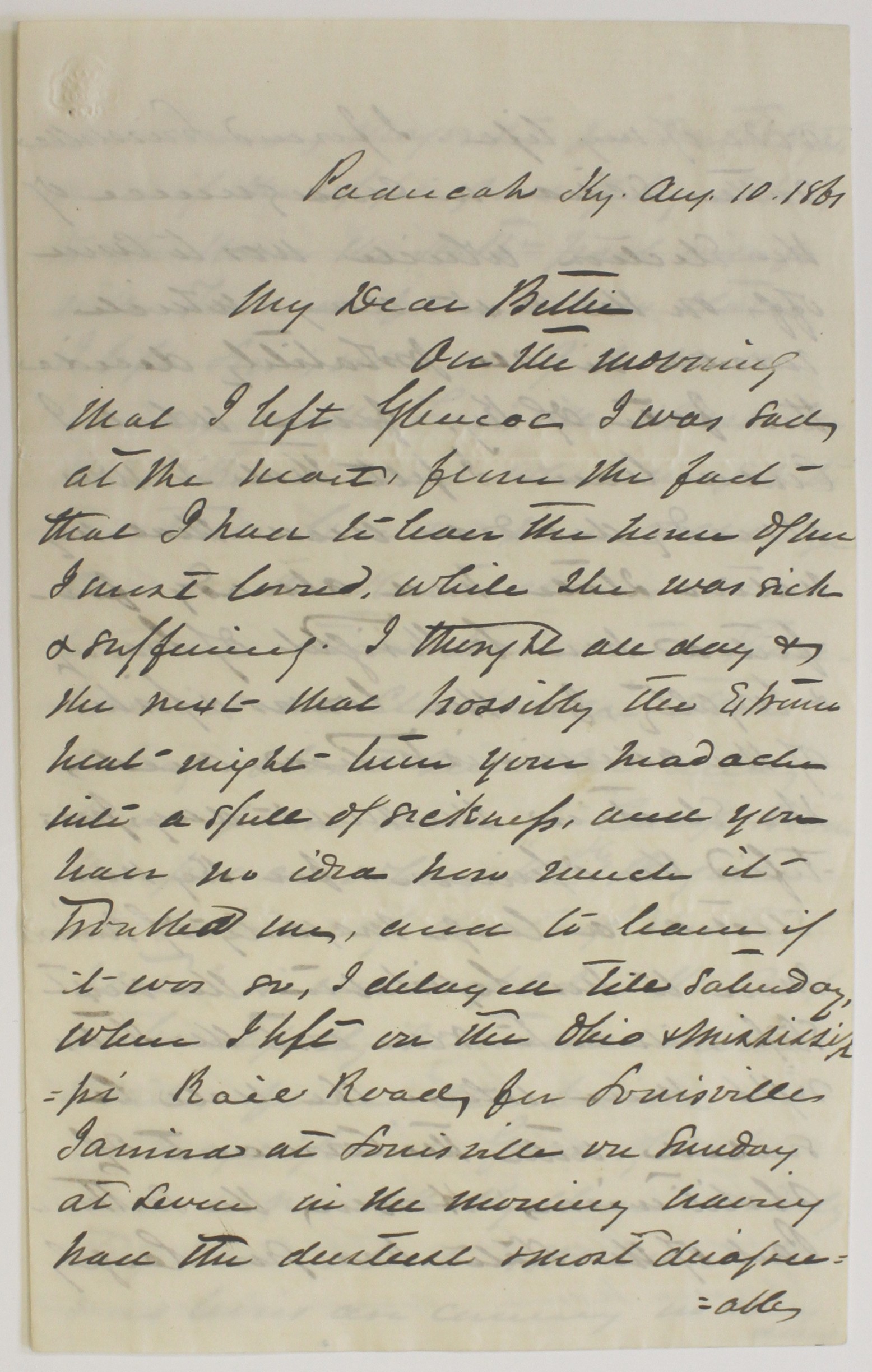 On the morning that I left Glencoe I was sad at the heart, from the fact that I had to leave the house of her I most loved, while she was sick and suffering. I thought all day and the next that possibly the extreme heat might turn your headache into a spell of sickness, and you have no idea how much it troubled me, and to leave if it was so. I delayed till Saturday, when I left on the Ohio and Mississippi Rail Road for Louisville. I arrived at Louisville on Sunday at seven in the morning having had the dustiest and most disagreeable ride of my life. I found Louisville rather excited in consequence of the election which was to come off on the next day, which would in all probability decide the fate of Ky. From what I learn I felt that it was already decided, and that my native state had already forfeited her birthright of bravery and loyalty,  for the loaves and fishes of the administration, and the Election the next day justified the opinion, for Ky. has elected a large majority of Union men to her legislature. The next step will be to run out the States Right men, when she will be sealed with the Covenant of Abolitionism. However, the Southern part of the State has given largely increased majorities for Southern Rights and if the upper part of Ky. adheres to the Union the Southern part will go with Tenn. or form a new state.

I left Louisville at 9 A.M. on Sunday on the Louisville and Nashville Rail Road and when we got to the state line we had to change cars as the Kentuckians will not run their trains into Tenn. I arrived at Clarksville that evening about sun set and went from there to “Camp Boone” the place where “the Ky. Brigade in Service of the Confederate States” is encamped. The Camp is beautifully situated about 8 miles from Clarksville in a magnificent grove of oaks, and is remarkably clean and orderly. They have about 1800 men and new levies are coming in every day.

I was most hospitably entertained by the Officers, and the Colonel of the First Regt. told me that he had help open my place for me, until he could do so no longer, as the necessities of the service required it should be filled, and that he thought I would be held by the United States longer than I was. He warmly pushed me to raise a company to go in as the First Company in the Third Regt. and gave me authority to do so and said that he would aid me in any way he could. I am sorry it turns out so but it cannot be helped and the place he wishes me to take is the highest position among the line officers. I came home, and remained one day and then was written for in one of the counties back of here. I went there and they professed to get up a company for me.

I have also had an offer of a company from Louisville Co. and I will determine what I shall do. I would have written to you sooner but for the reason that I have been absent till to day. I showed the daguerrotype you gave me to my mother and asked her what she thought of it. She said that it was the picture of a very handsome woman and that your face indicated a great deal of character. I told her that the picture was not a justice that the original was incomparably more beautiful. She asked who it was. I told her and told her all about you. After I finished she said that she was glad to hear it, that from what I told her you must be a very fine woman. She remarked at the same time that I was very much in love, which is all very true. When you gave me the daguerrotype I did not think it good enough, because the picture failed to do you justice, but now away from you I would lose it for any consideration. I have seen many ladies since I have left St. Louis but none that can compare to the peerless one I left behind me. You must remember your promise to me. That you will take plenty of exercise on horseback every day, for I do believe that exercise is the secret spring of health and happiness. Take good care of yourself for my sake and write to me very soon

Yours, with much love,

P.S. I will seal this letter and if it reaches you without being opened in the St. Louis Post Office I write more freely and fully about my movements in my next. Let me know it has been tampered with in the office.

More about this item: Given Campbell was born in Salem, Ky., on 31 December 1835. He studied law at the University of Virginia and, upon graduation, took up practice in Saint Louis, Mo. At the outbreak of the Civil War, he returned to Kentucky and joined the Confederate Army. He was commissioned a captain and eventually served with Nathan Bedford Forrest’s cavalry. By the close of the war, he had been given charge of Jefferson Davis’s personal escort. He published Memorandum of a Journal, Kept Daily During the Last March of Jefferson Davis in 1865.

In 1865, he married Susan Elizabeth Wood, the daughter of a prominent Saint Louis Unionist. After the war, he returned to Saint Louis, but was not able to resume his legal practice until 1873 because of restrictions on the activities of former Confederate soldiers. He remained a member of the Missouri Bar until his death in 1885.

This entry was posted in Southern Historical Collection and tagged Bettie Campbell, elections, Given Campbell, Kentucky. Bookmark the permalink.