22 August 1861:”Many seem to think it not unlikely that we will be summoned ere winter to do our knightly [d__?] on the coast of our own beloved State. If so, & the enemy come, I feel that we will give them a blow which will imprint the name of Carolina as deeply in the Yankee heart as that of Calais was in Bloody Mary’s.”

Posted on 22 Aug ’11 by Biff Hollingsworth

Item description: Here Hutson writes to his family about receiving goods from home, the health of the soldiers in the camp, and one man’s attempt to join their company. 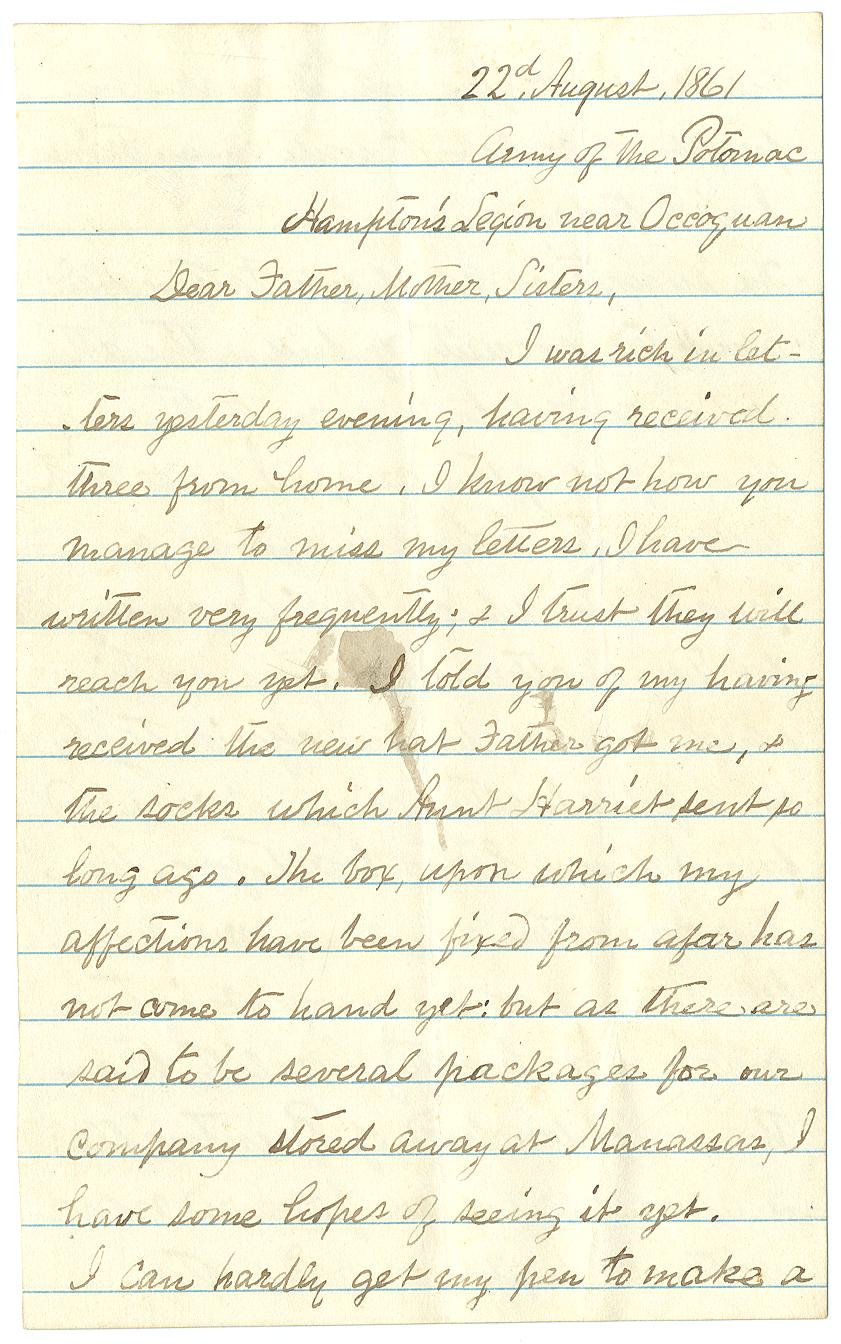 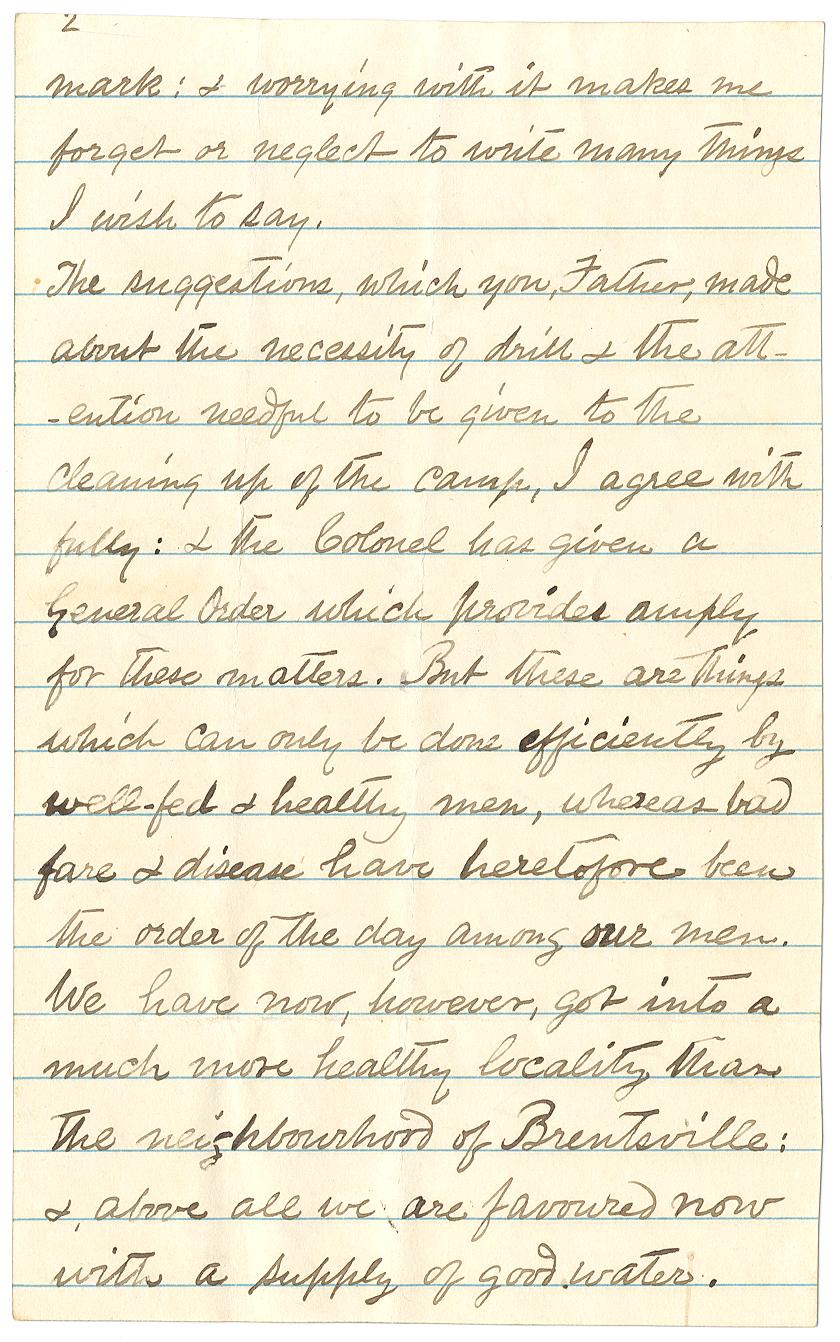 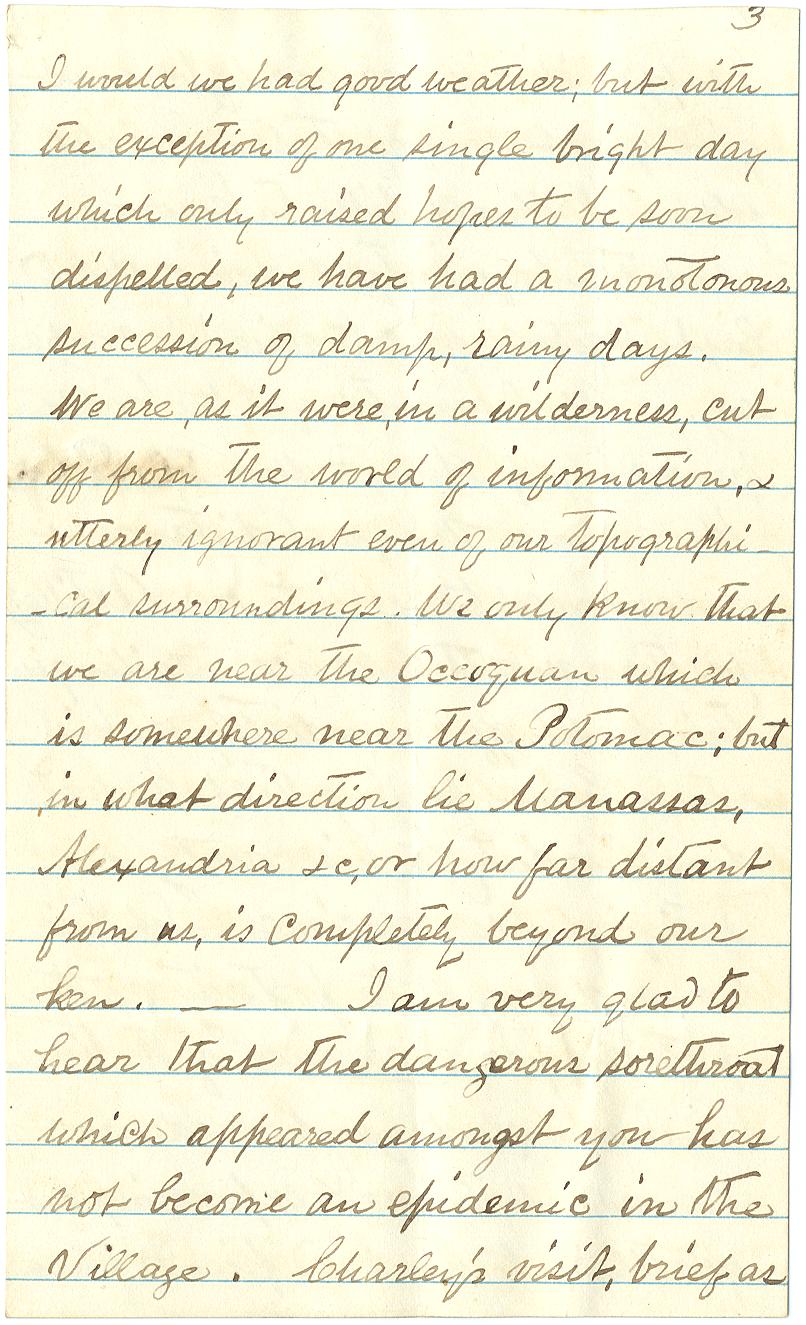 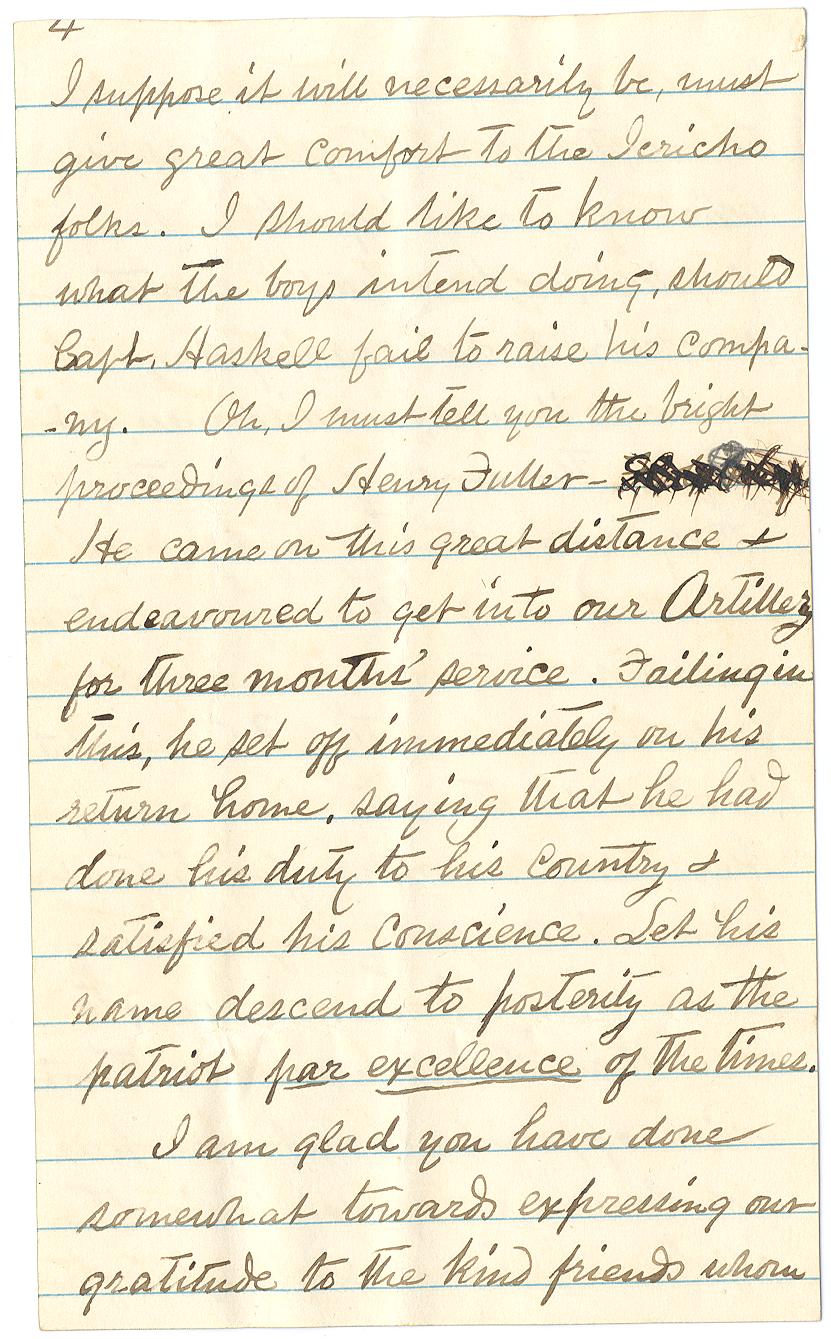 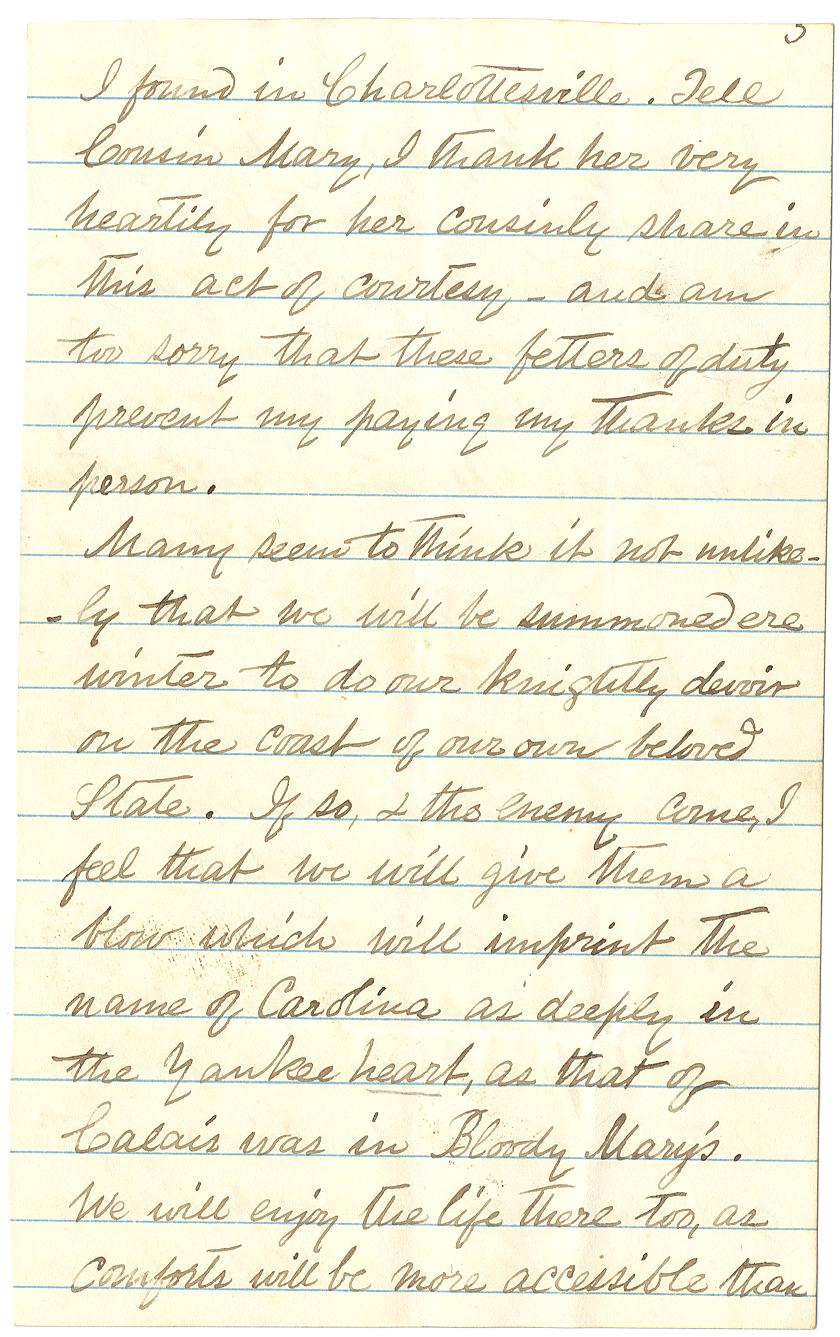 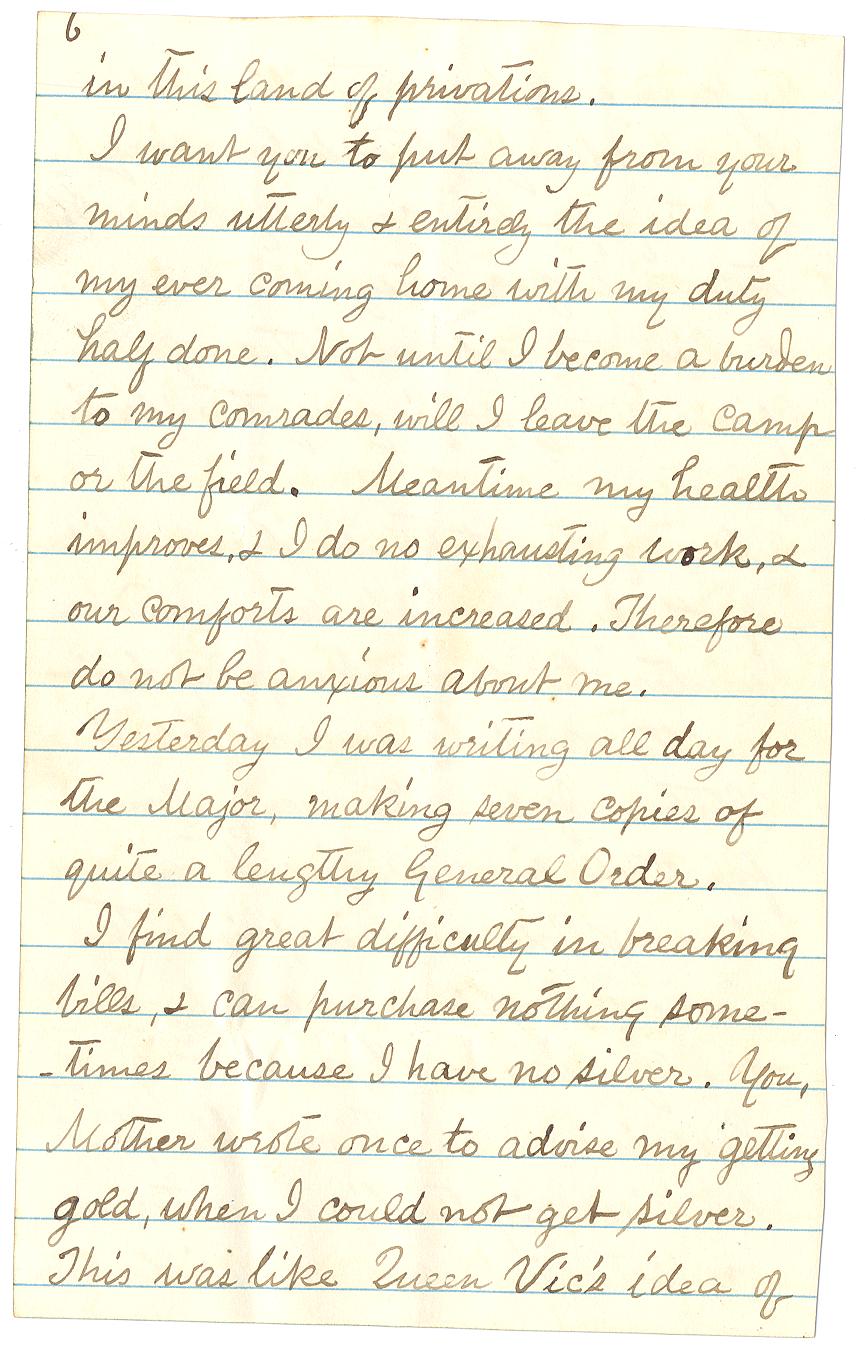 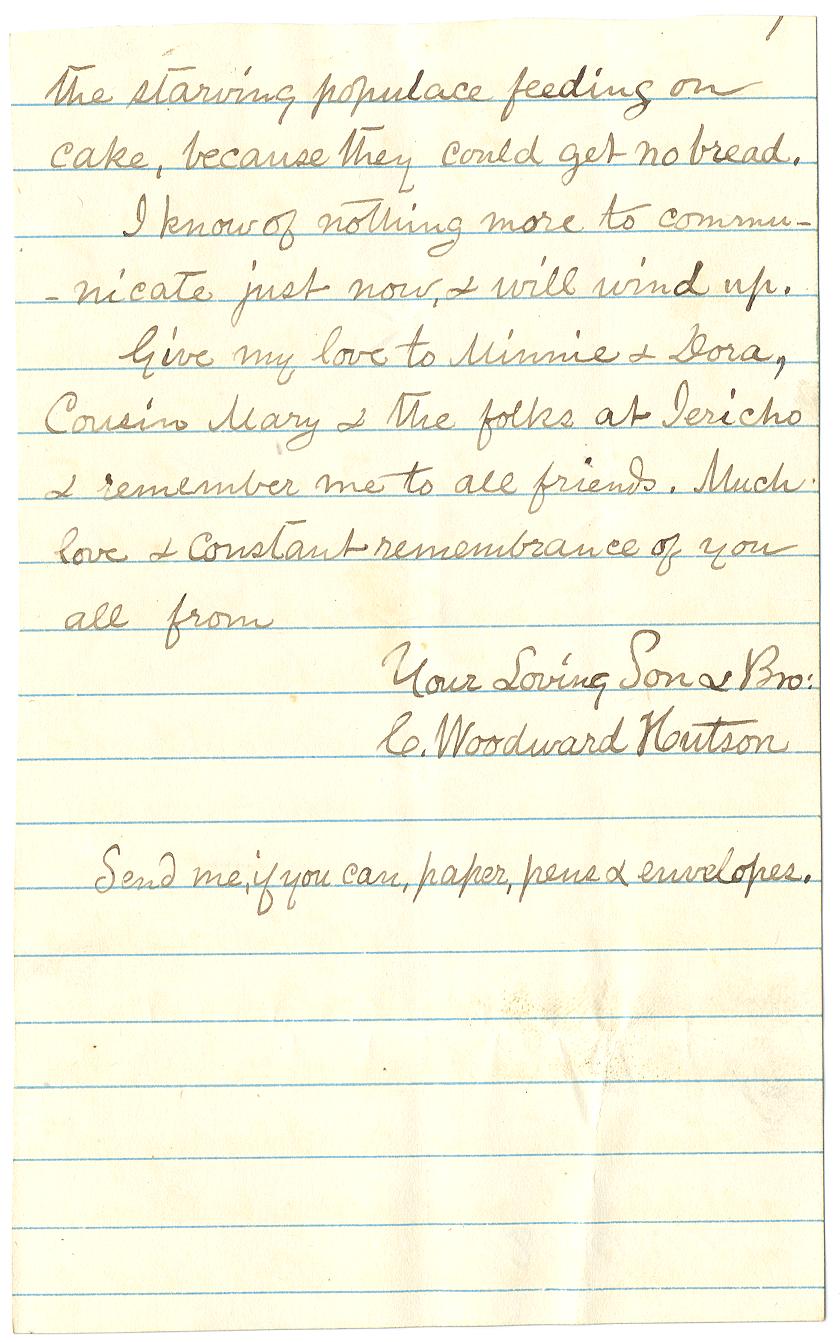 I was rich in letters yesterday evening having received three from home. I know not how you manage to miss my letters. I have written very frequently; & I trust they will reach you yet. I told you of my having received the new hat Father got me, & the socks which Aunt Harriet sent so long ago. The box, upon which my affections have been fixed from afar has not come to hand yet; but as there are said to be several packages for our company stored away at Manassas, I have some hopes of seeing it yet.

I can hardly get my pen to make a mark; & worrying with it makes me forget or neglect to write many things I wish to say.

The suggestions, which you, Father, made about the necessity of drill & the attention needful to be given to the cleaning up of the camp, I agree with fully: & the Colonel has given a General Order which provides amply for these matters. But these are things which can only be done efficiently by well-fed & healthy men, whereas bad fare & disease have heretofore been the order of the day among our men. We have now, however, got into a much more healthy locality near the neighbourhood of Brentsville; & above all we are favoured now with a supply of good water.

I would we had good weather; but with the exception of one single bright day which only raised hopes to be soon dispelled, we have had a monotonous succession of damp, rainy days.  We are, as it were, in a wilderness, cut off from the world of information, & utterly ignorant even of our topographical surroundings. We only know that we are near the Occoquan which is somewhere near the Potomac; but in what direciton lies Manassas, Alexandria, &c, or how far distant from us, is completely beyond our [?]

I am very glad to hear that the dangerous sorethroat which appeared amongst you has not become an epidemic in the village. Charley’s visit, brief as I suppose it will necessarily be, must give great comfort to the Jericho folks. I should like to know what the boys intend doing, should Capt. Haskell fail to raise his company.

I am glad you have done somewhat toward expressing our gratitude to the kind friends whom I found in Charlottesville. Tell Cousin Mary, I thank her very heartily for her cousinly share in this act of courtesy _ and am too sorry that these fetters of duty prevent my paying my thanks in person.

Many seem to think it not unlikely that we will be summoned ere winter to do our knightly [d__?] on the coast of our own beloved State. If so, & the enemy come, I feel that we will give them a blow which will imprint the name of Carolina as deeply in the Yankee heart as that of Calais was in Bloody Mary’s. We will enjoy the life there too, as comforts will be more accessible than in this land of privations.

I want you to put away from your minds utterly & entirely the idea of my ever coming home with my duty half done. Not until I become a burden to my comrades, will I leave the camp or the field. Meantime my health improves, & I do no exhausting work, & our comforts are increased. Therefore do not be anxious about me.

Yesterday I was writing all day for the Major, making seven copies of quite a lengthy General Order. I find great difficulty in breaking bill, & can purchase nothing sometimes because I have no silver. You, Mother wrote once to advise my getting gold, when I could not get silver. This was like Queen Vic’s idea of the starving populace feeding on cake, because they could get no bread.

I know of nothing more to communicate just now, & will wind up.

Give my love to Minnie & Dora, Cousin Mary & the folks at Jericho & remember me to all friends. Much love & constant remembrance of you all from

Send me, if you can, paper, pens & envelopes.

This entry was posted in Southern Historical Collection and tagged South Carolina, troops. Bookmark the permalink.