2 September 1861: “I am satisfied that Ky. will never be a reliable member of the Confederate States until she has gone through a bloody purgation.”

Item description: Given Campbell was born in Salem, Ky., on 31 December 1835. He studied law at the University of Virginia and, upon graduation, took up practice in Saint Louis, Mo. At the outbreak of the Civil War, he returned to Kentucky and joined the Confederate Army. He was commissioned a captain and eventually served with Nathan Bedford Forrest’s cavalry. By the close of the war, he had been given charge of Jefferson Davis’s personal escort. He published Memorandum of a Journal, Kept Daily During the Last March of Jefferson Davis in 1865.

In 1865, he married Susan Elizabeth Wood, the daughter of a prominent Saint Louis Unionist. After the war, he returned to Saint Louis, but was not able to resume his legal practice until 1873 because of restrictions on the activities of former Confederate soldiers. He remained a member of the Missouri Bar until his death in 1885. 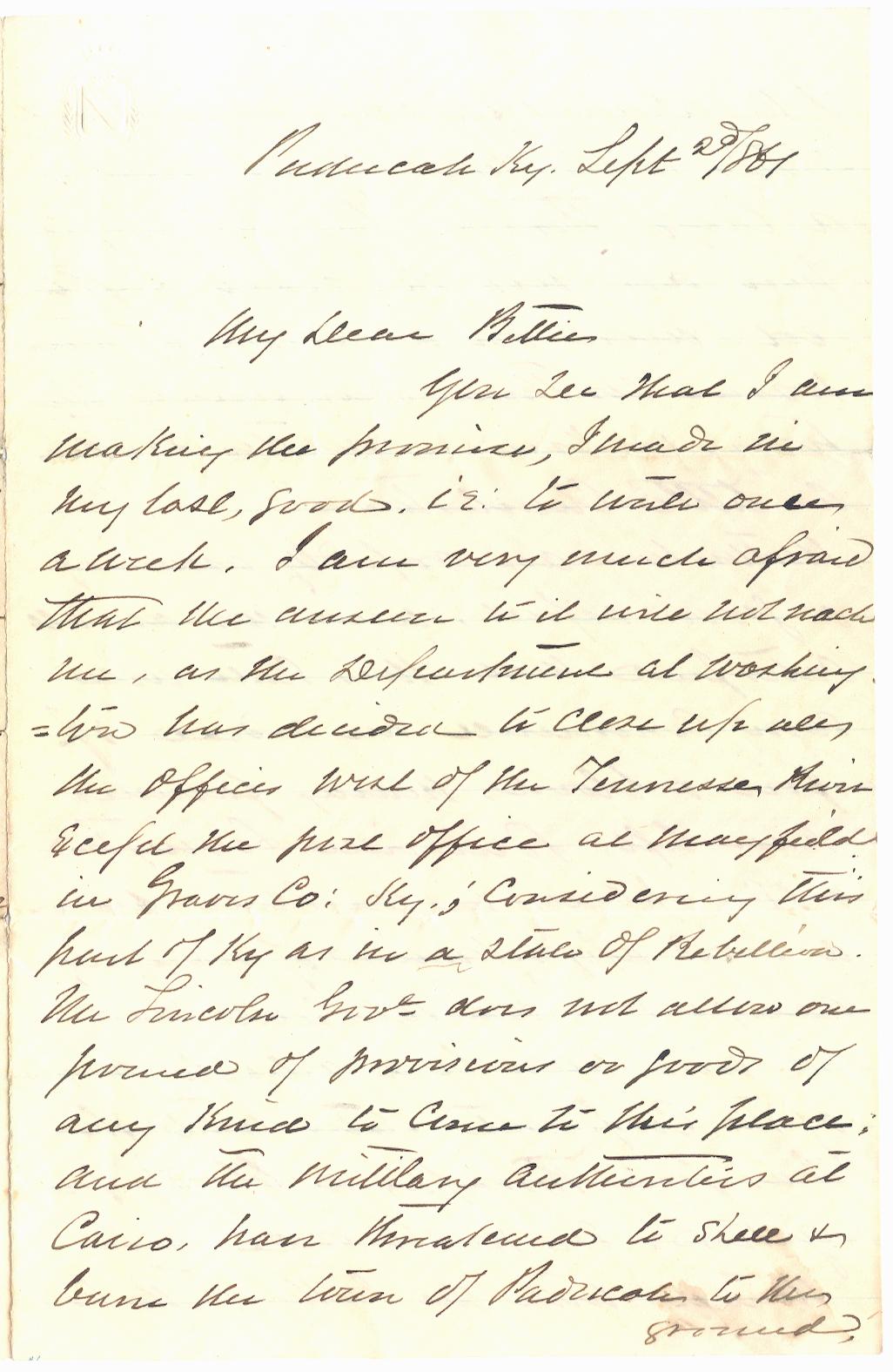 Item citation: From folder 1 of the Given Campbell Papers #5033-z, Southern Historical Collection, The Wilson Library, University of North Carolina at Chapel Hill.

You see that I am making the promises, I made in my last, good i.e. to write once a week. I am very much afraid that the answer to it will not reach me, as the department at Washington has decided to close up all the offices west of the Tennessee River except the post office at Matfield in Graves Co: Ky: considering this part of Ky. is in a state of rebellion. Mr. Lincolns Govt. does not allow one pound of provisions or goods of any kind to come to this place; and the Military authorities at Cairo have threatened to shell & burn the town of Paducah to the ground, if the citizens offer any more indignities to the vessels of U.S. This is a large threat, but the people here are not the least frightened, and on account of these warm Southern sentiments the town is known in the South as “little Charlestown.” Matters here are rapidly assuming a grave aspect, and we are all satisfied that this state will soon commence her ordeal of fire & blood. Many families have left Louisville, Lexington & other places in the state from a vivid apprehension of coming dangers. I am satisfied that Ky. will never be a reliable member of the Confederate States until she has gone through a bloody purgation. She might once have united with the South with honor & comparative unity but the people let the opportunity slip & they must drain the bitter consequences to the dregs.

But I will not dwell on this for I know you do not care much for politics. I long to see you – to hear your voice, if only for a short time, but there are obstacles which render it at present almost impossible. I have been informed that the Govt. has commenced a secret system of espionage, which is only one further step towards despotism. The Confederate States are not recognized by Lincoln as belligerent & he will not exchange prisoners with them. If he would do this I would not mind the risk, but to be taken & sent to his “Bastile” in New York & immersed in its dungeon til the end of the war is a danger worth a thought. I leave here to-day for camp with some recruits for my company which will shortly be full. They are all willing here for me to go, and I am anxious to be at work, not that I am afraid that I will not have planty to do, for I think that the North is just gathering for the struggle of which Manassas was but the introduction. I have great confidence in our cause & in its eventual success; but of all else I am most interested in my state Mo: & the Mecca of my hopes is to be able to march with a victorious army into St. Louis. I suppose that it will not be too prudent for me to write so plainly to you as St. Louis is under Martial Law & correspondence may be examined if so I promise not again to offend and in writing to me, it would be best for you not to say anything about St. Louis & its military condition. For you see by the papers that even Ladies are not exempt from the cowardly despotism of the Govt.

I have been to an entertainment lately, where there was wit & beauty the first & only one I have attended since I left St. Louis. I had a pleasant “hum-drum” time and was supremely indifferent. I really enjoy this feeling of perfect invulnerability. I am almost in hopes that you do not realize how secure your dominion in my heart is. I have no eye nor ear for another. But sometimes I have a fleeting fear that perhaps some one of your acquaintances aided by time & absence may obliterate the traces I left behind in your memory; but I banish these unwelcome thoughts & as the song goes “trust to luck.”

Yours with much love

P.S. Direct the answer of this to me at Mayfield

This entry was posted in Southern Historical Collection and tagged Given Campbell. Bookmark the permalink.