4 September 1861: “…our camp life is far from being the demoralizing thing camp-life in general has heretofore had the name of being.”

Posted on 4 Sep ’11 by Biff Hollingsworth

Item description: Letter, 4 September 1861, from Charles Woodward Hutson to his mother, discussing life in camp as part of the Hampton’s Legion South Carolina Infantry. Charles Woodward Hutson (1840-1936) grew up on plantations in Beaufort District, S.C., attended South Carolina College, served throughout the Civil War in Virginia, was a teacher and professor in several southern states including fifteen years in Texas, and settled finally in New Orleans as an artist and writer. Hutson enlisted as a private in the A Company. The Hampton Legion South Carolina Infantry Battalion was organized on 12 June 1861, and mustered out 9 April 1865 at Appomattox Court House. 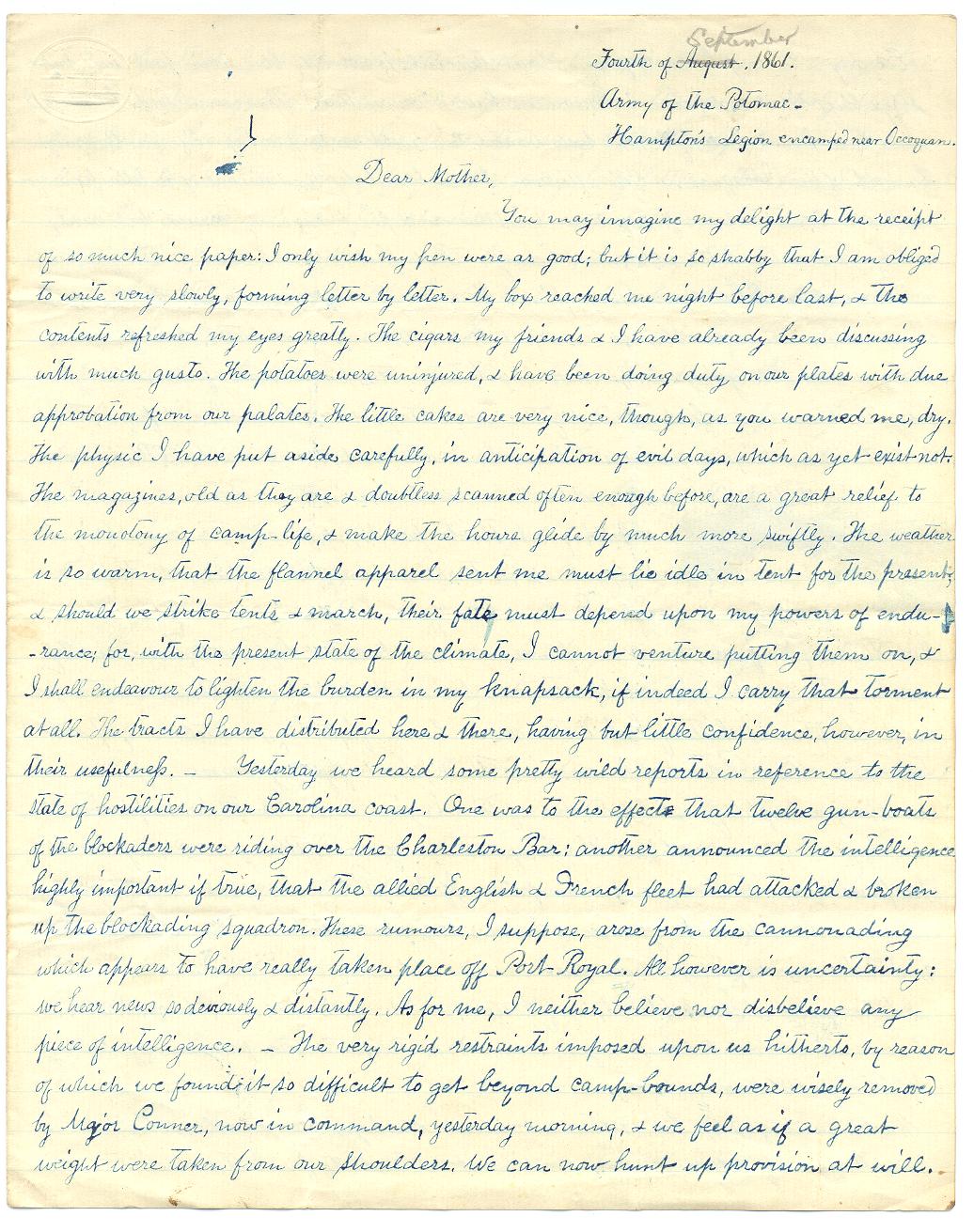 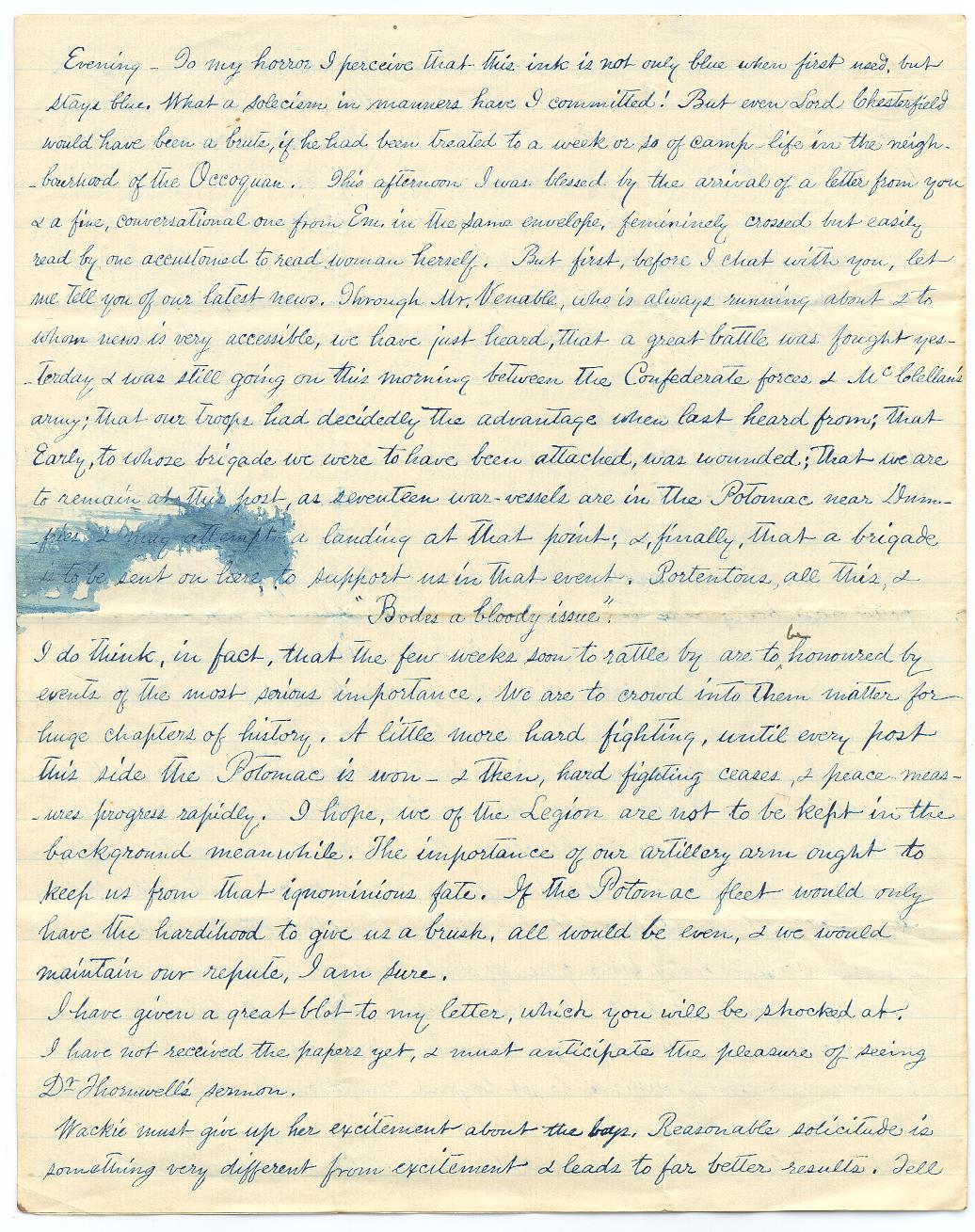 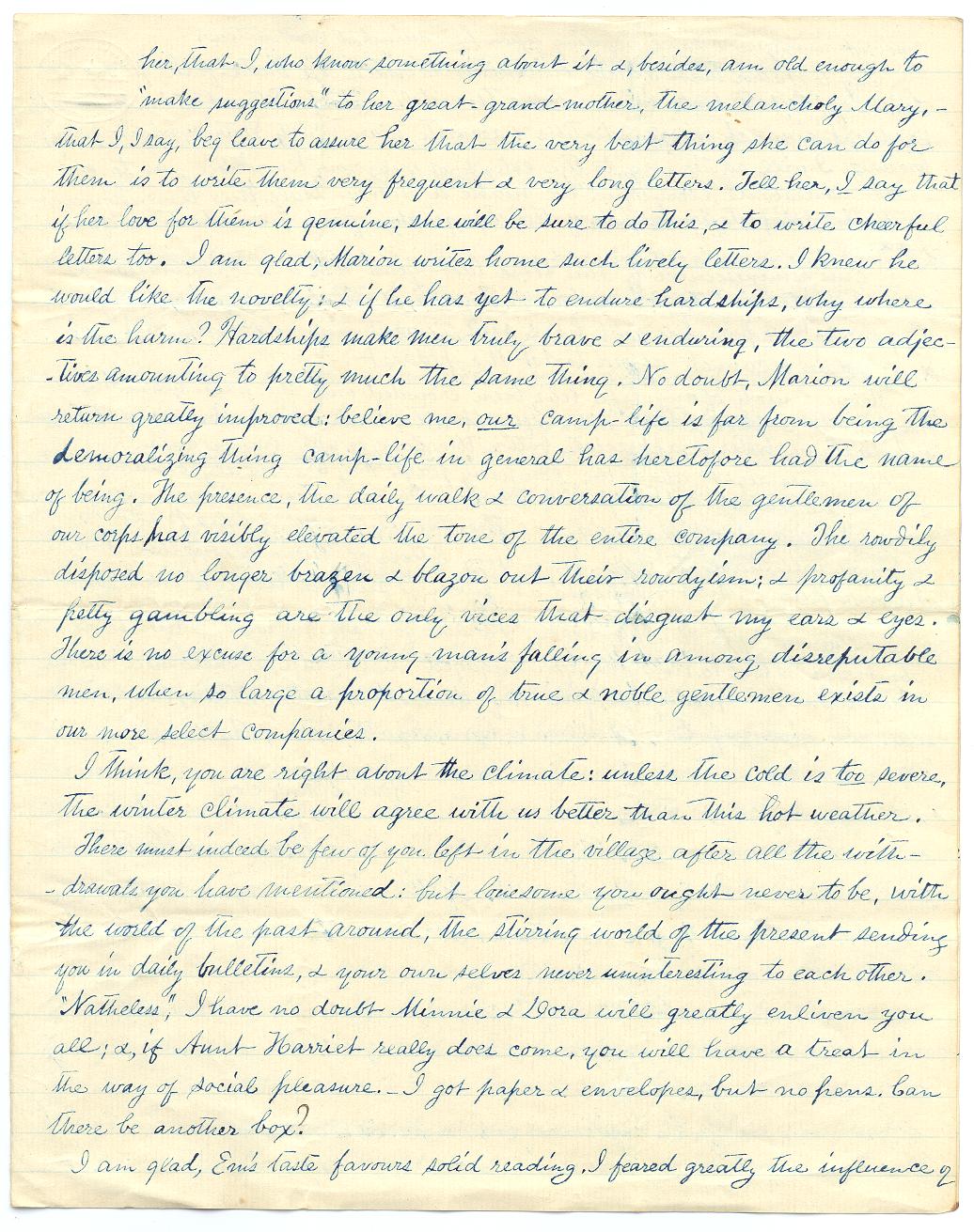 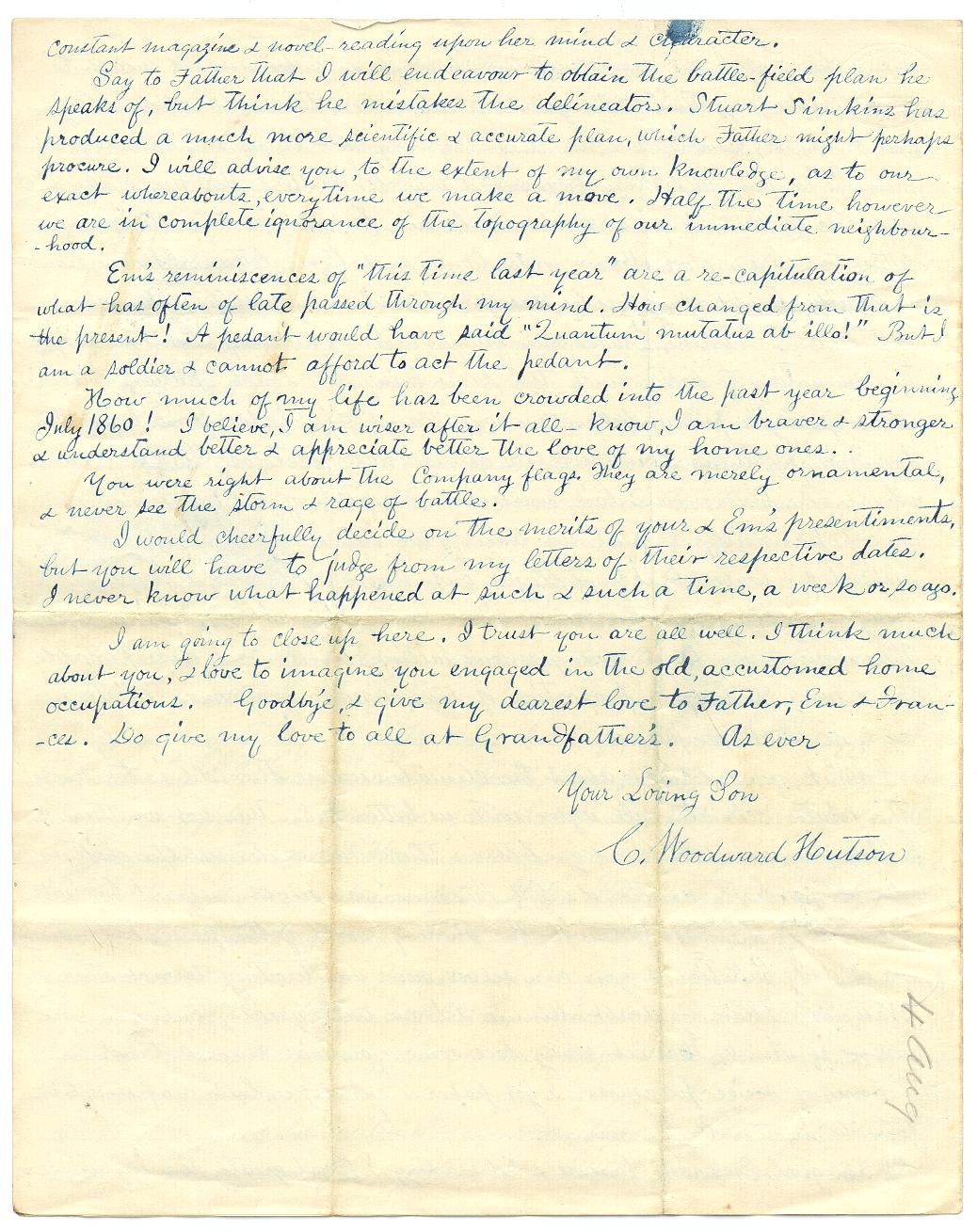 You may imagine my delight at the receipt of so much nice paper; I only wish my pen were as good; but it is so shabby that I am obliged to write very slowly, forming letter by letter. My box reached me night before last, & the contents refreshed my eyes greatly. The cigars my friends & I have already been discussing with much gusto. The potatoes were uninjured, I have been doing duty on our plates with due approbation from our palates. The little cakes are very nice, though, as you warned me, dry. The physic I have put aside carefully, in anticipation of evil days, which as yet exist not. The magazines, old as they are & doubtless scanned often enough before, are a great relief to the monotony of camp life, & make the hours glide by much more swiftly. The weather is so warm, that the flannel apparel sent me must lie idle in tent for the present; & should we strike tents & march, their fate must depend upon my powers of endurance; for, with the present state of the climate, I cannot venture putting them on, & I shall endeavor to lighten the burden in my knapsack, if indeed I carry that torment at all. The tracts I have distributed here & there, having but little confidence, however, in their usefulness.

Yesterday we heard some pretty wild reports in reference to the state of hostilities on our Carolina coast. One was to the effect that twelve gun-boats of the blockaders were riding over the Charleston Bar; another announced the intelligence highly important if true,that the allied English & French fleet had attacked & broken up the blockading squadron. These rumours, I suppose, arose from the cannonading which appears to have really taken place off Port Royal. All however is uncertainty; we hear news so deviously & distantly. As for me, I neither believe nor disbelieve any piece of intelligence.

The very rigid restraints imposed upon us hitherto, by reason of which we found is so difficult to get beyond camp-bounds, were wisely removed by Major Conner, now in command, yesterday morning, & we feel as if a great weight were taken from our shoulders. We can now hunt up provision at will.

Evening – To my horror I perceive that this ink is not only blue when first used, but stays blue. What a solecism in manners have I committed! But even Lord Chesterfield would have been a brute, if he had been treated to a week or so of camp life in the neighborhood of the Occoquan. This afternoon I was blessed by the arrival of a letter from you & a fine, conversational one from Em. in the same envelope, femininely crossed but easily read by one accustomed to read woman herself. But first, before I chat with you, let me tell you of our latest news. Through Mr. Venable, who is always running about & to whom news is very accessible, we have just heard, that a great battle was fought yesterday & was still going on this morning between the Confederate forces & McClellan’s army; that our troops had decidedly the advantage when last heard from; that Early, to whose brigade we were to have been attached, was wounded; that we are to remain at this post, as seventeen war-vessels are in the Potomac near Dumfries & may attempt a landing at that point; & finally, that a brigade is to be sent on here to support us in that event. Portentous, all this, &

I do think, in fact, that the few weeks soon to rattle by are to be honoured by events of the most serious importance. We are to crowd into them matter for huge chapters of history. A little more hard fighting, until every post this side the Potomac is won. & then, hard fighting ceases, & peace measures progress rapidly. I hope, we of the Legion are not to be kept in the background meanwhile. The importance of our artillery arm ought to keep us from that ignominious fate. If the Potomac fleet would only have the hardihood to give us a brush, all would be even, & we would maintain our repute, I am sure.

I have given a great blot to my letter, which you will be shocked at. I have not received the papers yet, & must anticipate the pleasure of seeing Dr. Thornwell’s sermon.

Wackie must give up her excitement about the boys. Reasonable solicitude is something very different from excitement & leads to far better results. Tell her, that I, who know something about it &, besides, am old enough to “make suggestions” to her great-grandmother, the melancholy Mary, that I, I say, beg leave to assure her that the very best thing she can do for them is to write them very frequent & very long letters. Tell her, I say that if her love for them is genuine, she will be sure to do this, & to write cheerful letters too. I am glad, Marion writes home such lively letters. I knew he would like the novelty; & if he has yet to endure hardships, why where is the harm? Hardships make men truly brave & enduring, the two adjectives amounting to pretty much the same thing. No doubt, Marion will return greatly improved; believe me, our camp life is far from being the demoralizing thing camp-life in general has heretofore had the name of being. The presence, the daily walk & conversation of the gentlemen of our corps has visibly elevated the tone of the entire company. The rowdily disposed no longer brazen & blazon out their rowdyism; & profanity & petty gambling are the only, vices that disgust my ears & eyes. There isno excuse for a young man’s falling in among disreputable men, when so large a proportion of true & noble gentlemen exists in our more select companies.

I think, you are right about the climate; unless the cold is too severe, the winter climate will agree with us better than this hot weather.

There must indeed be few of you left in the village after all the withdrawals you have mentioned; but lonesome you ought never to be, with the world of the past around, the stirring world of the present sending you in daily bulletins, & your own selves never uninteresting to each other. “Natheless,” I have no doubt Minnie & Dora will greatly enliven you all; &, if Aunt Harriet really does come, you will have a treat in the way of social pleasure. I got paper & envelopes, but no pens. Can there be another box?

I am glad, Em’s taste favours solid reading. I feared greatly the influence of constant magazine & novel-reading upon her mind & character.

Say to Father that I will endeavour to obtain the battle-field plan he speaks of, but think he mistakes the delineator. Stuart Simkins has produced a much more scientific & accurate plan, which Father might perhaps procure. I will advise you, to the extent of my own knowledge, as to our exact whereabouts, everytime we make a move. Half the time however we are in a complete ignorance of the topography of our immediate neighbourhood.

Em’s reminiscences of “this time last year” are a re-capitulation of what has often of late passed through my mind. How changed from that is the present! A pedant would have said “Quantum mutatus ab illo!” But I am a soldier & cannot afford to act the pedant.

How much of my life has been crowded into the past year beginning July 1860! I believe I am wiser after it all. Know, I am braver & stronger & understand better & appreciate better the love of my home ones.

You were right about the Company flags. They are merely ornamental, & never see the storm & rage of battle.

I would cheerfully decide on the merits of your & Em’s presentiments, but you will have to judge from my letters of their respective dates. I never know what happened at such & such a time, a week or so ago.

I am going to close up here. I trust you are all well. I think much about you, & love to imagine you engaged in the old, accustomed home occupations. Goodbye, & give my dearest love to Father, Em & Frances. Do give my love to all at Grandfather’s. As ever

One Response to 4 September 1861: “…our camp life is far from being the demoralizing thing camp-life in general has heretofore had the name of being.”