6 September 1861: “We have thought continually of you, since the startling intelligence arrived of the enemy having established themselves so near you!”

Posted on 6 Sep ’11 by Biff Hollingsworth

Item description: Letter, 6 September 1861, from “Anna,” of Charleston, S.C., to Jane Caroline “Carey” North Pettigrew, in Tyrrell County, N.C. The writer’s identity is not known, although Anna appears to be one of Carey Pettigrew’s cousins. The letter describes growing anxieties in and around the coastal areas of South and North Carolina, details the efforts of relief societies, and reports on family news. 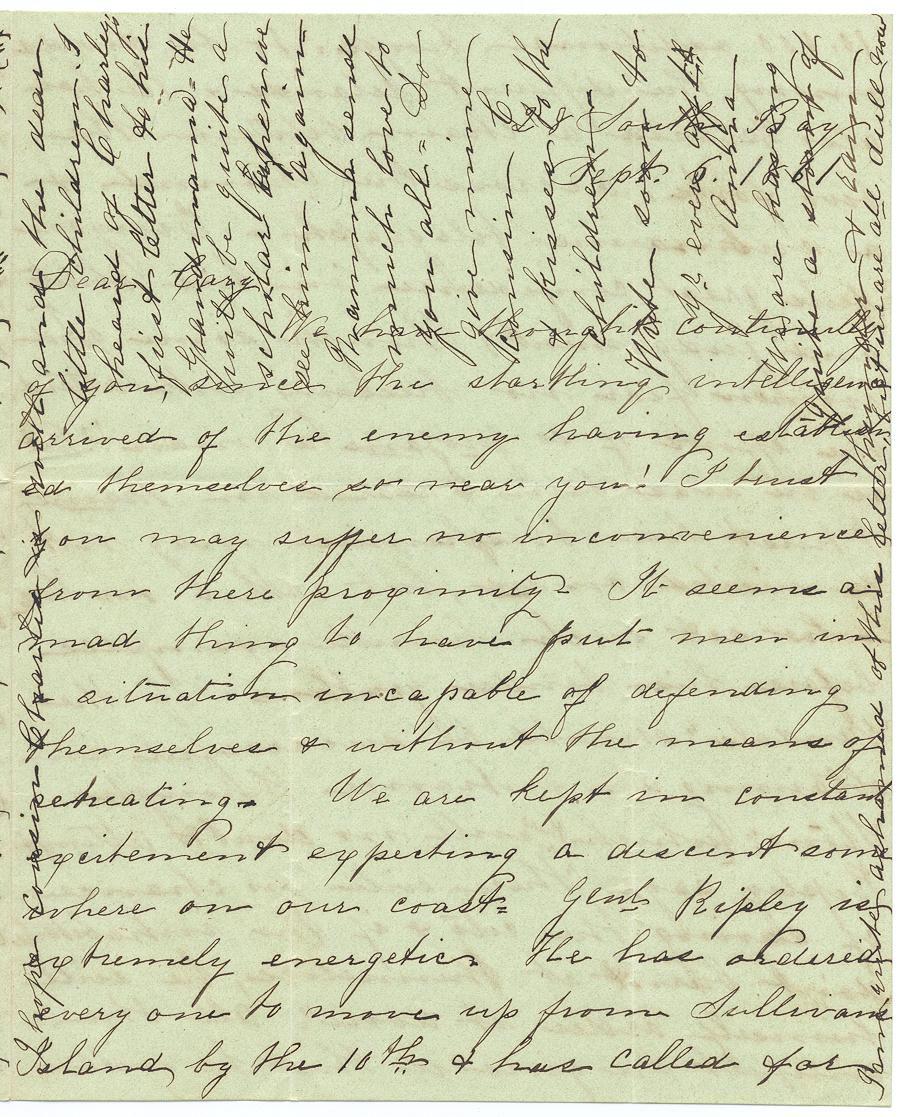 We have thought continually of you, since the startling intelligence arrived of the enemy having established themselves so near you! I trust you may suffer no inconvenience from their proximity. It seems a mad thing to have put men in a situation incapable of defending themselves & without the means of retreating. We are kept in constant excitement expecting a descent somewhere on our coast. Genl Ripley is extremely energetic. He has ordered every one to move up from Sullivan’s Island by the 10th & has called for 10,000 additional troops to be divided among the different islands. He has also placed a chain between the two forts, accross the channel & a submarine telegraph. Everyone feels great confidence in his ability and judgement, though some good women fear no blessing will attend the efforts of so profane a man!! But as he was born & reared in Maine, I trust his blasphemies may not be visited on us, but rather on those who set such horrible examples before his tender youth. If the “vandals” should be successful in obtaining an entrance through “[?]” (which they will no doubt attempt), Ripley says “there will no chance of saving the city & if the inhabitants don’t burn it themselves, he will himself order it done!! All the comfort he gives is that he will give timely warning for all who would like to fly!! I think we should all be prepared for sudden flight. I am going to make a little bag, in which I could stow away all I desire most to save, & wear it as an old time “tournure”! It could not interfere with the celerity of my motions & might unite the useful & becoming. Yesterday we were alarmed by reports that two thousand friends had landed near Pawley’s Island. From a letter, received from Bessie, it proves only to have been a No. Ca. corn vessel. They went through all the terrors of a real invasion. All the men were ordered out. Joe & Parson Quimby (his guest) rushed to the rescue, with the other Islanders, all armed with swords, their only weapon against cannons!! What a blessing the ship was loaded with provisions instead of powder. I wish the Allstons could all leave the island, it keeps us constantly anxious about them.

You know, doubtless, that our anxiety is further increased by having Charley exposed to the chances of war in Va. He was so bent on going, that finally we were obliged to consent. He is in the “Washington Light Infantry” of Hampton’s Legion. A very nice company, composed mostly of his acquaintances. We hear twice a week from him, so far he appears not to have regretted his rashness, but says he “gets on beautifully.” It is distressing to hear of the sickness in the camp & so many die. Charly says of an Up-country Company of 170 men, only 7 appear at drill. The measles have been strangely fatal. Ben Allston is now Col. of the Alabama Regt. which lost its Col. in the fight. He says it is only a temporary arrangement, but enjoys it while it lasts. Phil is stationed in a “Tug of war” off a miserable little island near Savannah. He is a prey to musquitoes & ennui & longs to be actively engaged somewhere.

We see very little of Aunt Anne. She is so taken up with Bet & Kate & Mrs. Shacelford, [?], &c., that she rarely thinks of us now. Mrs. S. has spent some time with her this summer which she seemed to enjoy. Uncle Henry continues to drill his men. You know he is Capt. of the “Charleston Invincibles” a highly respectable corps of elderlies. Dr. Geddings proves himself a first rate soldier as well as Dr. Holbrook. Aunt Harrie has been for the last month at Summerville where she enjoys bad fare & plenty of gossip. We were delighted at the account you give of your doings for the soldiers. We are busy on socks, the turning of the heel is a great test of one’s patriotism. We would give our blankets too but they are as old and thin, that I fear the poor fellows to whose Col. they would fall would suffer much from exposure.

We have had some domestic uneasiness lately. Loulie has had an attack of rheumatism & Papa quite sick with fever. Happily both are once more on their feet, but considerably worsted by their sufferings. At this season any indisposition is alarming. September is always our month of horrors. “Over next door” are exceedingly despondent. They were very much alarmed by the delay of the steamer on which Mr. Duclos[?] sailed from Europe. It was six days behind time but finally turned up. All communication having ceased, they never hear from Elizabeth now. Their imaginations picture both E. & Polydore awaiting their fate in one of the prisons which Lincoln has brought into service.

I hope cousin Charles is well and the dear little children. I heard of Charley’s first letter to his grandmama. He will be quite a scholar when we see him again. Mamma sends much love to you all. Do give mine cousin C. & kisses to the children. Write soon to

We are having quite a storm of thunder & rain.

I am quite ashamed of this letter but we are all dull now.