8 September 1861: “you wished to know if I had burnt your letters I kept all of them till a week or so since. when I had a bonfire burnt up all I’ve received from you except the two last”

Posted on 8 Sep ’11 by Biff Hollingsworth

Item description: Letter, 8 September 1861, from Robert W. Parker to his wife Rebecca. He describes camp life, soldiers’ pay, and comments on his provisions for the upcoming autumn and winter.

Robert W. Parker was born in 1838 in Pittsylvania County, Va. His father, Ammon H. Parker, and mother, Frances Goggin Parker, eventually settled in Bedford County, Va., where Robert became a farmer. Robert served in the 2nd Virginia Cavalry of the Confederate States of America Army from the onset of the American Civil War, and attained the rank of 4th Sergeant. Robert was killed in action at Appomattox Courthouse, Va., on the morning of 9 April 1865, the same day that Robert E. Lee surrendered his Army of Northern Virginia to the Union Army. Surviving him was his wife, Rebecca Louise Fitzhugh Walker Parker, and two sons. 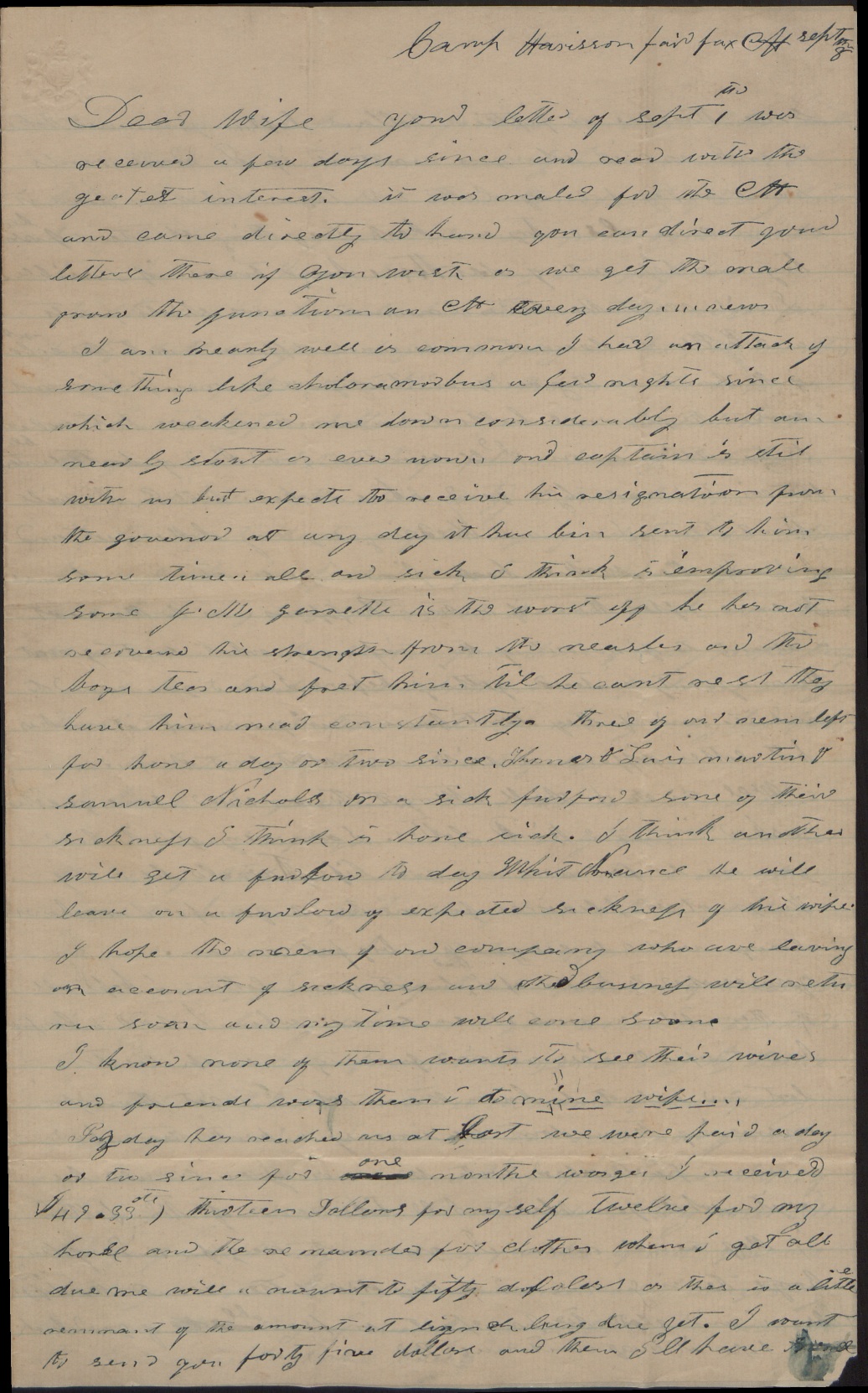 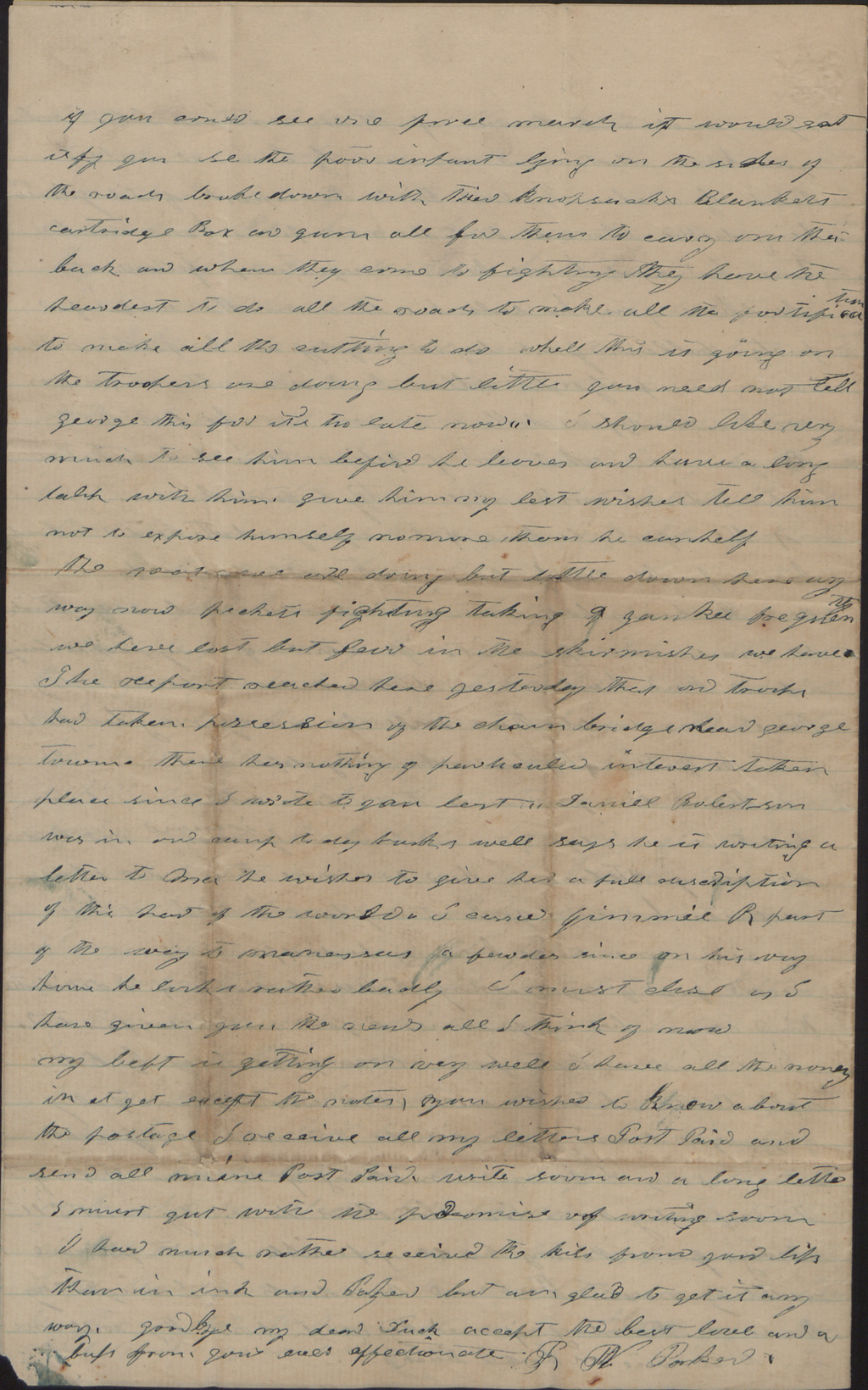 Dear Wife Your letter of Sept th 1 was received a few days since and read with the greatest interest. It was maled for the CH and came directly to hand you can direct your letter there if you wish as we get the male from the junction an CH every day…

I am nearly well as common I had an attack of something like choloramorbus a few nights since which weakened me down considerably but am nearly stout as ever now. and captain is still with us but expects to receive the resignation from the governor at any day it has bin sent to him some time. all our sick I think is improving some J.M garrelle is the worst off he has not recovered his strength from the measles and his boys teas and fret him til he cant rest. They have him read constantly. three of our men left for home a day or two since. Thurner & Luis martin & Samuel Nichols on a sick furlow some of their sickness I think is home sick. I think another will get a furlow to day Whit Vance he will leave on a furlow of expected sickness of his wife. I hope the men of our company who are leaving on account of sickness and other business will return soon and my time will come soon.

I know none of them wants to see their wives and friends wors than I do mine wife… Today pay reached us at last we were paid a day or two since for one months wages. I received $49.33do) Thirteen Dollars for myself Twelve for my horse and the remainder for cloths when I get all due me will a mount to fifty dollars as this is a little remnant of the amount at lynchburg due yet. I want to send you forty five dollars and then I’ll have some twelve or fifteen dollars left.. you must take it and use it when you want it if Pa wants some to Pay for my cloths and taxes let him have it or any thing else  Try and keep every thing straite as possible try and keep out of debt these hard times if possible. I will want the cloths I named draws shirts pants and (Bbs) it doesn’t make much difference as to the colors of the pants so they are good strong warm ones. I have not worn the flannel belts for a month or two but expect to try them soon  I’ll want a pair of boots suitable for winter made by a good shoe maker. Tell Pa he will attend them. I am not Knedding any any cloths yet and hope if the wether keeps fine I will stand a chance to come after them if nothing happens. As to the coat I want to find out of the company what sort of coat the majority intend getting before I send you word to make it. And if they don’t have an uniform coat it makes but little difference with me what sort it is…

Well Duck I shall attempt to answer some questions asked in your kind letter. I am very glad to hear you are so fat once in your life. Twould beone of the greatest pleasures for me to see you for I have always wished to see you a big fat woman.

you wished to know if I had burnt your letters  I kept all of them till a week or so since. when I had a bonfire burnt up all I’ve received from you except the two last and expect to burn them when I get through answering them  don’t lie uneasy a bout them for I am as particular with them as you would be with what you please  I’ll take care of the letters if they search me.  I am not very fraid of the Boys teasing me and if they did little would the difference be.  I am glad the prospect is favorable of good luck and hope it may continue so.

you wished to know if that certain letter with you know what in it was send by hand or male I think by male. I don’t think the report of Lil Johnson being fretted when he saw the news from home can be true but dont know he is a very strange fellow to show you he sold his three months wages for forty dollars just before payday and his first months wages was fortyeight dollars the three months wages was worth nintyfive dollars so you see he lost $55 you see what sort of fellow. he is of en taking notion tisnot worth while to try to turn him…

if the report be true of his saying what he did about his wife he surely hasn’t got good sense for I don’t think any body with good sense woul even think so much more speak it..

you spoke of many people being a fraid their husbands or brothers would be led astray there is no doubt there will be many led far from the pathe they trod when they left home.

I thank kind providence that I have taken no bad habits since I left you and have only increased one that the use of tobacco  I chew some more than I did when we parted but can quit at any time  I think it does me good some times but may be disappointed. nver fear of my yealding to dissipations of a dissipated kind  remember my promised to you when we parted  I received a letter from Ma yesterday by Rellie Wells he looks tolerable well  Ma wrote principally of george leaving  I wish he had come and found our company  I know something of the hard ships of the infantry soldiers  let others do as they wish I’ll always go with my horse if possible if not give me artilery next  there are hundreds and I might say thousands that say if ever they reach home they will come in to service on horse back.

if you could see one force march it would satisfy you se the poor infant lying on the sides of the roads bundle down with their knapsacks  Blankets cartridge Box and gun all for them to carry on their back and when they come to fighting they have the hardest to do all the roads to make all the fortifications to make all the cutting to do while this is going on the trackers are doing but little  you need not tell george this for its too late now…  I should like very much to see him before he leaves and have a long talk with him.  give him my best wishes tell him not to expose himself no more than he can help

the… are doing but little down here any way now pickets fighting taking a yankee frequently  we have lost but few in the skirmishes we have.  The report reached here yesterday that our troops had taken possession of the chain bridge near george town.  there was nothing of particular interest taken place since I wrote to you last… Daniel Boleston was in our camp to day looks well says he is writing a letter to Ma  he wishes to give her a full description of this part of the world.  I caried Jimmie R part of the way to Manassas a few days since on his way home he looked rather badly.  I must close as I have given you the news all I think of now.

my belt is getting on very well I have all the money in it yet except my notes)  you wished to know about the postage  I receive all my litters Post Paid and send all mine Post Paid. write soon and a long letter I must quit with the promise of writing soon  I have much rather received the kiss from your lips than in ink and Paper but am glad to get it any way.  goodbye my Duck accept the best love and a kiss from your ever affectionate  R.W. Parker