23 September 1861: “’tis only in keeping with the baseness to which the men who for their own selfish ends, will resort to break down my influence and authority…”

Posted on 23 Sep ’11 by Biff Hollingsworth

Item description: Diary entry, 23 September 1861, of Captain Lewis H. Webb, Company D, 23rd Regiment N.C. Troops. Webb writes of discontent within his company. Captain Webb resigned his post shortly after the time of this diary entry, due to an apparent disagreement between Webb and one of his subordinates, a Lieutenant Ben Covington. 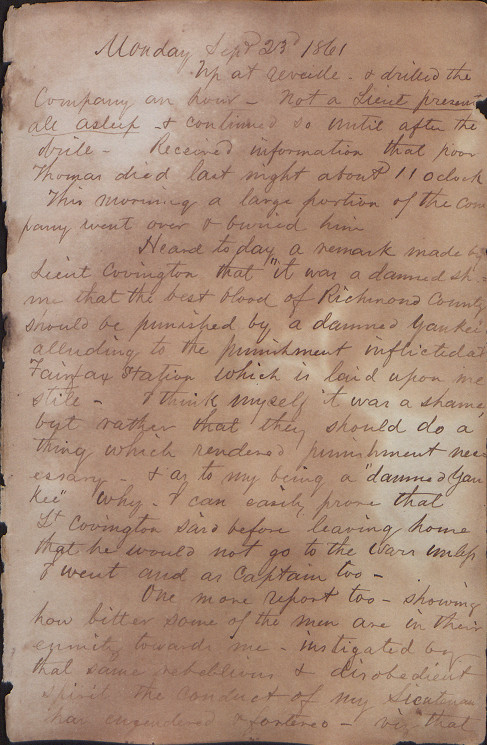 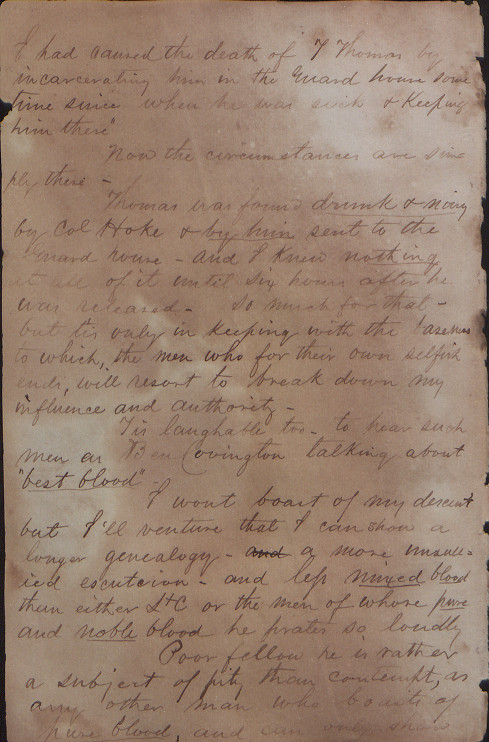 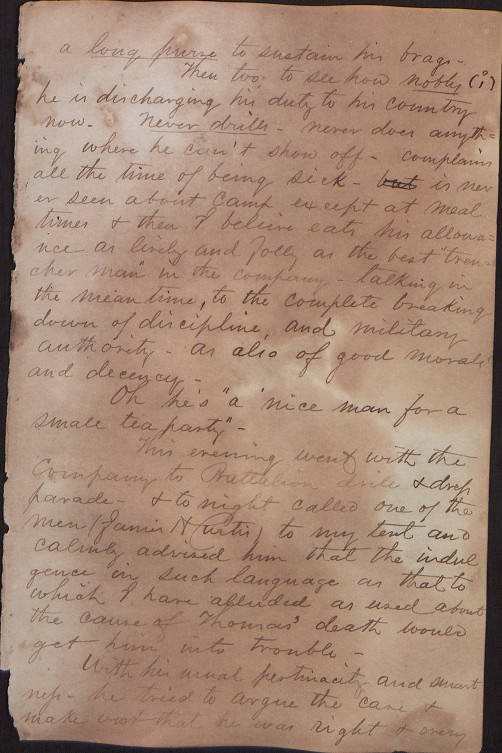 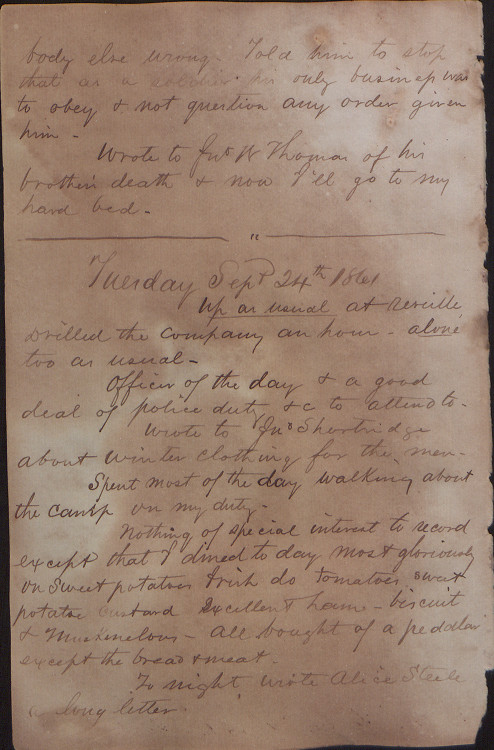 Monday, Sept. 23d 1861.
Up at reveille and drilled the Company an hour, of which there was not a Lieutenant present, all asleep, and continued so until after the drill. I received information that poor Thomas died last night about 11 o’clock. This morning a large portion of the Company went over and buried him.
Heard today a remark made by Lieutenant Covington that “it was a damned shame that the best blood of Richmond County should be punished by a damned Yankee” alluding to the punishment inflicted at Fairfax station which is laid upon me still. I think myself but rather that they should do a thing which rendered punishment necessary, and so as to my being a “damned Yankee” why, I can easily prove that Lt. Covington said before leaving home that he would not go to the war unless I went, and as Captain too.
One more report too– showing how bitter some of the men are in their enmity towards me– instigated by that same rebellious disobedient spirit of the conduct of my Lieutenants has endangered and fostered vis “that I caused the death of Thomas by incarcerating him in the Guardhouse some time since when he was sick & keeping him there.”
Now the circumstances were these. Thomas was found drunk & noisy by Col. Hoke and by him sent to the Guardhouse, of which I knew nothing at all until six hours after he was released. So much for that, but ’tis only in keeping with the baseness to which the men who for their own selfish ends, will resort to break down my influence and authority.
‘Tis laughable too, to hear such men as Ben Covington talking about best blood. I won’t boast of my descent, but I’ll venture that I can show a longer genealogy and less mixed blood than either Lt. C or the men of whose “pure” and noble blood he prates too loudly. All he can do is show a large purse to sustain his brags.

Then too to see how nobly he is discharging his duty to his country now. Never drills. Never does anything where he can’t show off. Complains all the time of being sick. is never seen about camp, except at meal times & then I believe eats his allowance as lively and folly as the best “trencher man” in the company, talking in the mean time, to the complete breaking authority. As also of good morals and decency.

This evening went with the company to Battalion drill & dress parade, & to night called one of the men (James H. Curtis) to my tent and calmly advised him that the indulgence in such language as that to which I have alluded as usual about the cause of Thomas’ death would get him into trouble.

With his usual pertinacity and smartness, he tried to argue the case & make out that he was right & every body else wrong. Told him to stop that as a soldier, his only business was to obey not question any order given him.

Wrote to Jno. W. Thomas of his brother’s death & now I’ll go to my hard bed.

This entry was posted in Southern Historical Collection and tagged discension, discontent. Bookmark the permalink.