24 September 1861: “Near five months have now passed since we left home. Seven still intervene and I hope will pass as rapidly as the two last.”

Posted on 24 Sep ’11 by Biff Hollingsworth

In this love letter, dated  24 September 1861, Dawson describes a relative calm within his company, except for an incident where two of his men brawled and were later court martialed. He also writes of a mission that was aborted at the last moment. 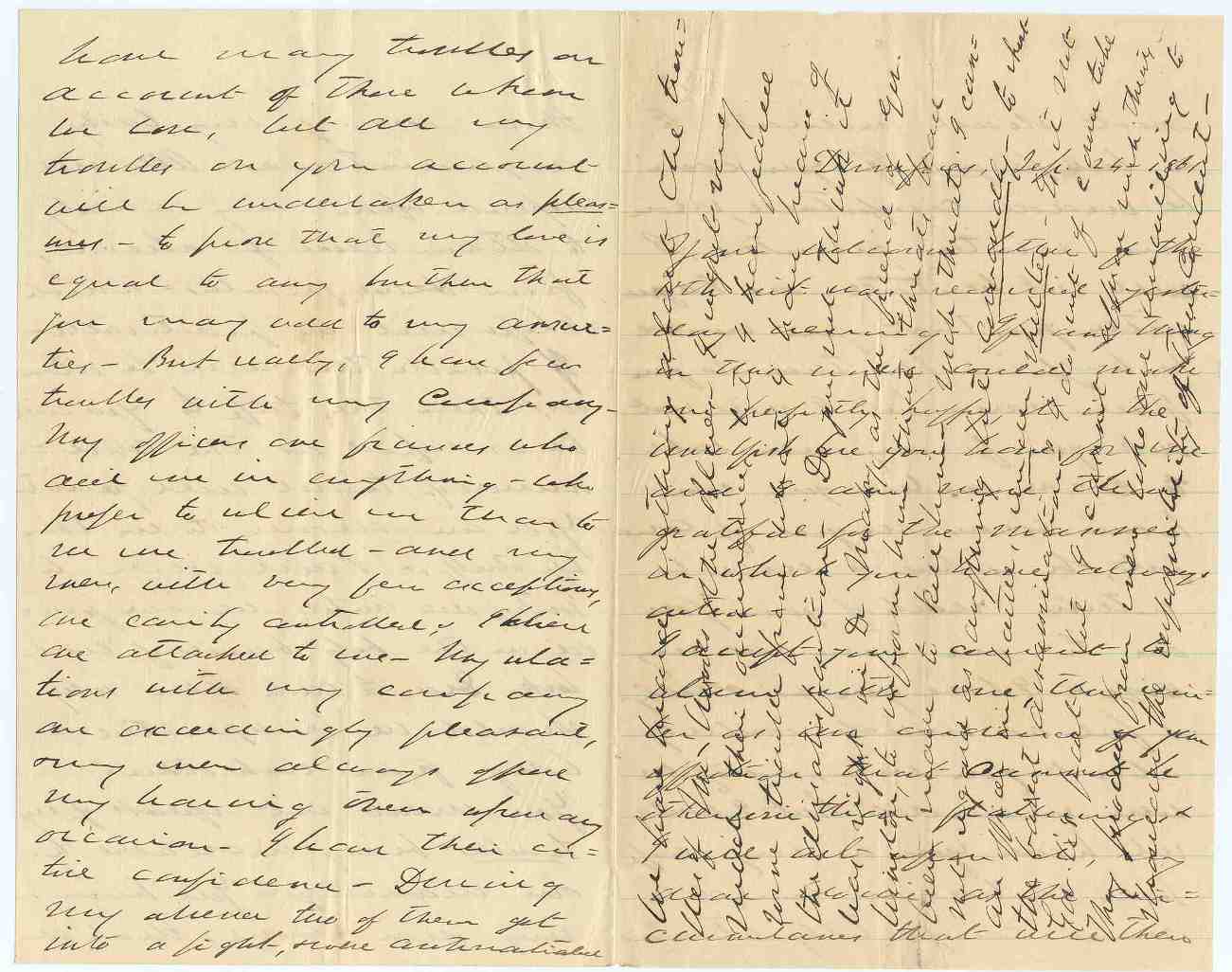 Your welcome letter of the 15th inst, was received yesterday evening. If any thing in this world could make me perfectly happy it is the unselfish love you have for me, and I am more than grateful for the manner in which you have always acted.

I accept your comment to return with me, this winter, as an evidence of your affection that cannot be otherwise than flattering, and I will act upon it, my dear Elodie, as the circumstances that will then exist shall indicate to be best for you. If you can be made comfortable, near our winter quarters, I will not hesitate, as I agree with you, that you would be happier here than so far from me, but I will not ask you for my own sake to come unless you can have some degree of comfort, and be where I will be within reach of you. You are to me now as my wife. I love you as dearly, and feel as much anxiety about you now, as if we were married. But I would not have you as my wife here, unless you could be more comfortably situated than some of my lady acquaintances. All will depend upon my ability to obtain leave of absence, from Headquarters, which I hope will be procurable. If possible this will be obtained, then the trip to you will be as rapid as the conveyances of travel will permit. You are dearer to me than life itself, and I will never be satisfied until we are joined in the holy bonds of wedlock. Dear to each other why should we be separated so long from each other? You must not speak of my troubles being increased by our marriage. You know, my dear Elodie, that we have many troubles on account of those whom we love, but all my troubles on your account will be undertaken as pleasures, to prove that my love is equal to any burden that you may add to my anxieties. But really, I have few troubles with my Company. My officers are friends who aid me in everything, who prefer to relieve me than to see me troubled, and my men, with very few exceptions, are easily controlled, and I believe are attached to me. My relations with my company are exceedingly pleasant, and my men always oppose my leaving them upon any occasion. I have their entire confidence. During my absence two of them got into a fight, and were court martialed and punished. They are both much mortified, especially one of them who is a sensitive and high toned young man, and one of my favorites, Ben Bell, the brother of your friend, Miss Bell. Say nothing of this, as I would not have Mrs. Reece know that her son had been in trouble. I think, my dear Elodie, that you are too severe upon Mr. Price, as I am confident he never meant to do me harm, tho’ his remark may have been indiscreet. He is a friend of mind, and was very indignant at the report. He was like myself ignorant of its circulation until near a month after the battle. Did Dr. Cable give it any credence?

As Mr. Byrd published a very unsatisfactory letter, I hope he will make use of those I sent him. They were entrusted to the discretion of Mr. Wetmore and other friends besides himself.

Last evening we got orders to march with rations for one day. We left camp at dark, but after proceeding about two miles, the order was countermanded, and we returned, much to my disappointment, as we were to make an attack upon the fleet in the river. (confidential) I think we were not quite ready, but hope we will make an assault on the Yankees this week. Our batteries are being created secretly at night in several places, on the river so as to deceive the enemy, and to take their attention from the principal point being fortified. On Sunday evening I rode over to the batteries with Col. Allerton, and met with an old So. Ca. acquaintance, Col. Pettigrew, of the 2nd N.C. Regiment. Our division of the army, that of Fredericksburg, is commanded by Brig. Gen. Holmes, Mr. Wetmore’s brother in law. I have not met him, Gen. G.A. Smith, of Kentucky, has succeeded Gen. Johnston, as commander of the right wing of the army of the Potomac, the latter being commander in chief. I have enquired for your brother David, and hear that he is here, but do not know at what point.

And now, dear Elodie, let me again tell you that you are too much concerned about the troubles of your family. They are in the path of duty, like thousands besides, and you have reason to be proud of their stand, and should congratulate yourself, that the brothers in law of Mr. Lincoln have taken up arms against him. This fact alone should satisfy you, and I trust you will take a better and more hopeful view of things. You tell me that you have shed tears over the course of Kentucky, so have many brave men, but all will yet be right, and I hope for your sake that she will be [?] from the [?] that now overshadows her. I see that the southerners are likely to give trouble to Gen. Anderson in that latitude, and I hope Gen. Albert Johnston will bring a strong influence to bear upon the fortunes of his native state.

Near five months have now passed since we left home. Seven still intervene and I hope will pass as rapidly as the two last. The nights are now very cool, and the days warm. Yesterday it was cold enough for frost. I begin to despair of wintering in Washington city. We are near enough to hear the cannon at Arlington Heights, and we hear that they were taken yesterday. An incessant war of artillery was heard all day. We may be on the eve of great events. Please present me kindly to Miss Kittie, and tell her I hope she will return to Ala. if she should leave before I have the pleasure of seeing her. When the war is over, and we can go to Kentucky, she will certainly be willing to return with you to spend a winter, when I hope Selma will have more attractions. Like you, she may become an Alabamian.

And now, dear Elodie, I have written you a long letter, as you desired, and I hope you will find it as pleasant to read as it has been to me to write. I will write you as often as possible, but the Examiner must supply the news.

Goodbye. May God in his Providence preserve and keep you always is the prayer of one devoted to his affectionate Elodie.

Affectionately and sincerely yours,

We have heard nothing about the trouble of the Woods and the Blues. I regret very much this occurrence, but I have feared some trouble from what I have heard of the dissatisfaction. Do you not think it was right in Dr. Mabry, as the friend of Gen. Winston, to inform him that threats had been made to kill him, such threats I cannot regard as anything but cowardly, to shoot an officer in battle, undershelter. Is it nor Gen. W’s part, but I cannot approve such threats. They proceed from men who are unwilling to shoulder the responsibility of their conduct.