1 October 1861: “And I immediately commenced casting about for a servant to send to you.”

Posted on 1 Oct ’11 by Biff Hollingsworth

When Brigadier General James Johnston Pettigrew wrote to his family back home in North Carolina requesting that a servant be sent to him, William S. Pettigrew hastened to send Peter, one of 158 slaves owned by their brother Charles L. Pettigrew of Tyrrell County in 1860. Peter was a mulatto, a person of mixed race, with a wife and at least six children, living at Bonarva, the Pettigrew plantation located on the northeastern shore of Lake Scuppernong (later renamed Lake Phelps).  When the war began, Peter’s life changed in ways that he could have never have anticipated. (Adapted from North Carolina and the Civil War: They Were There: Peter (http://ncmuseumofhistory.org/exhibits/civilwar/explore_section4e.html)). 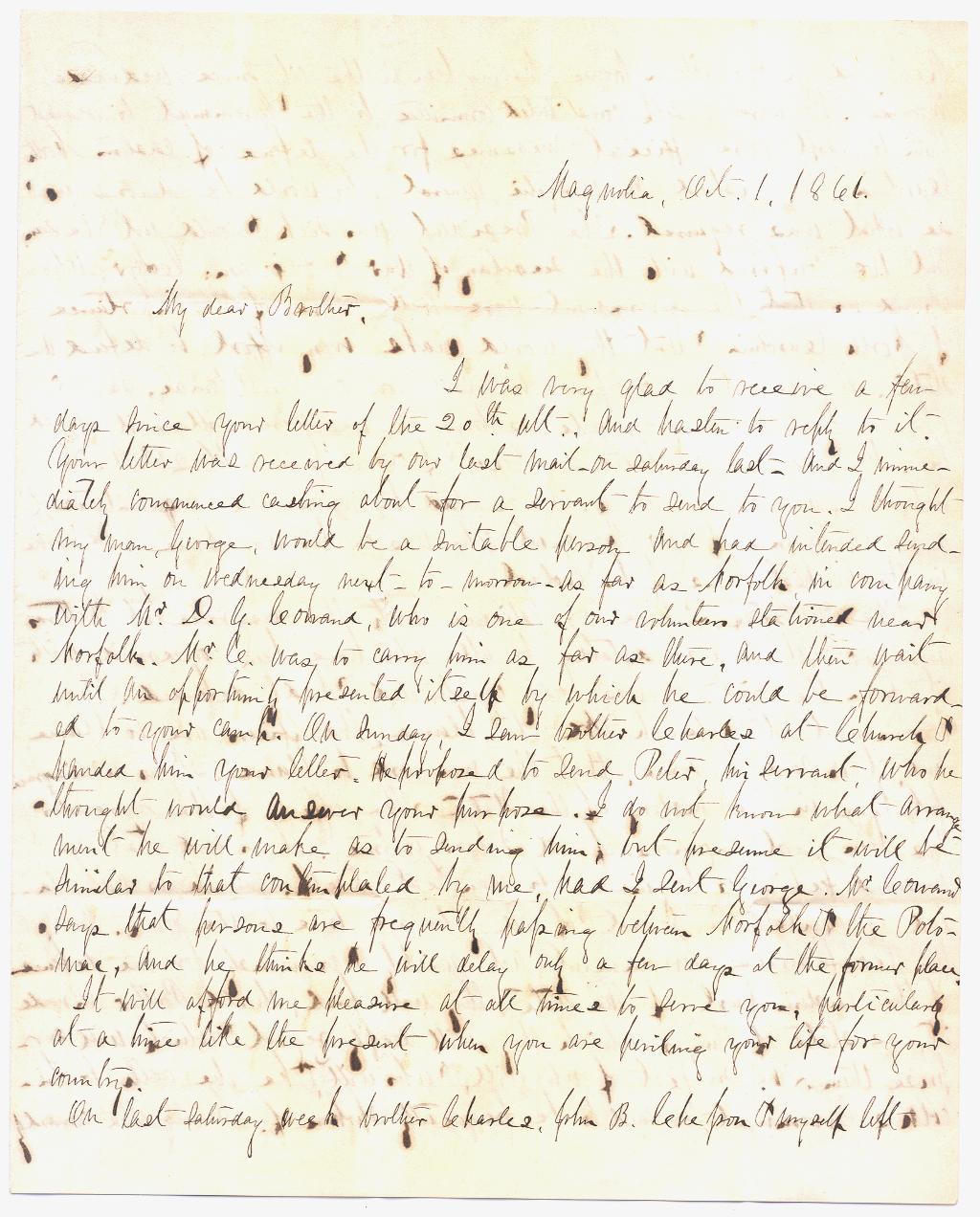 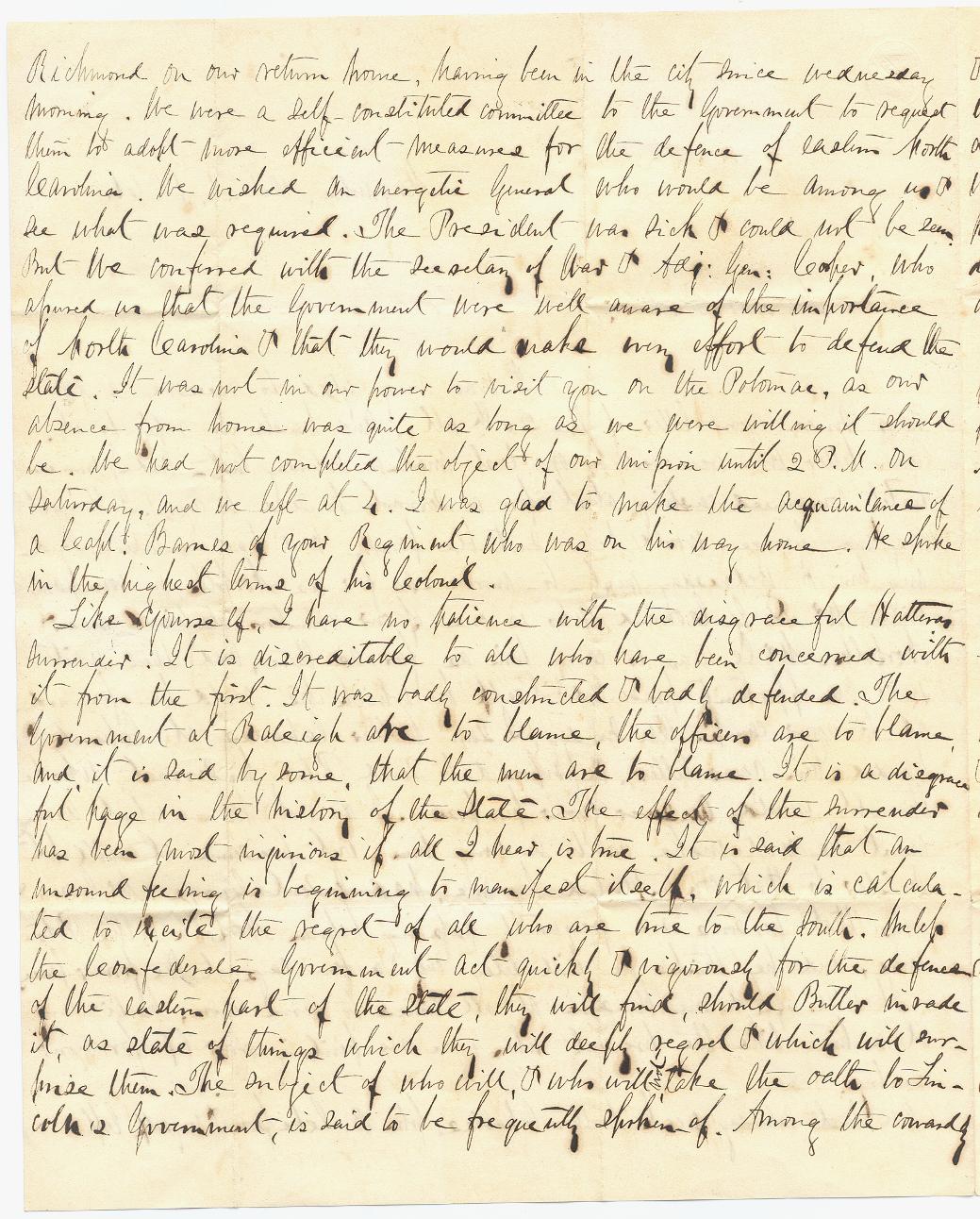 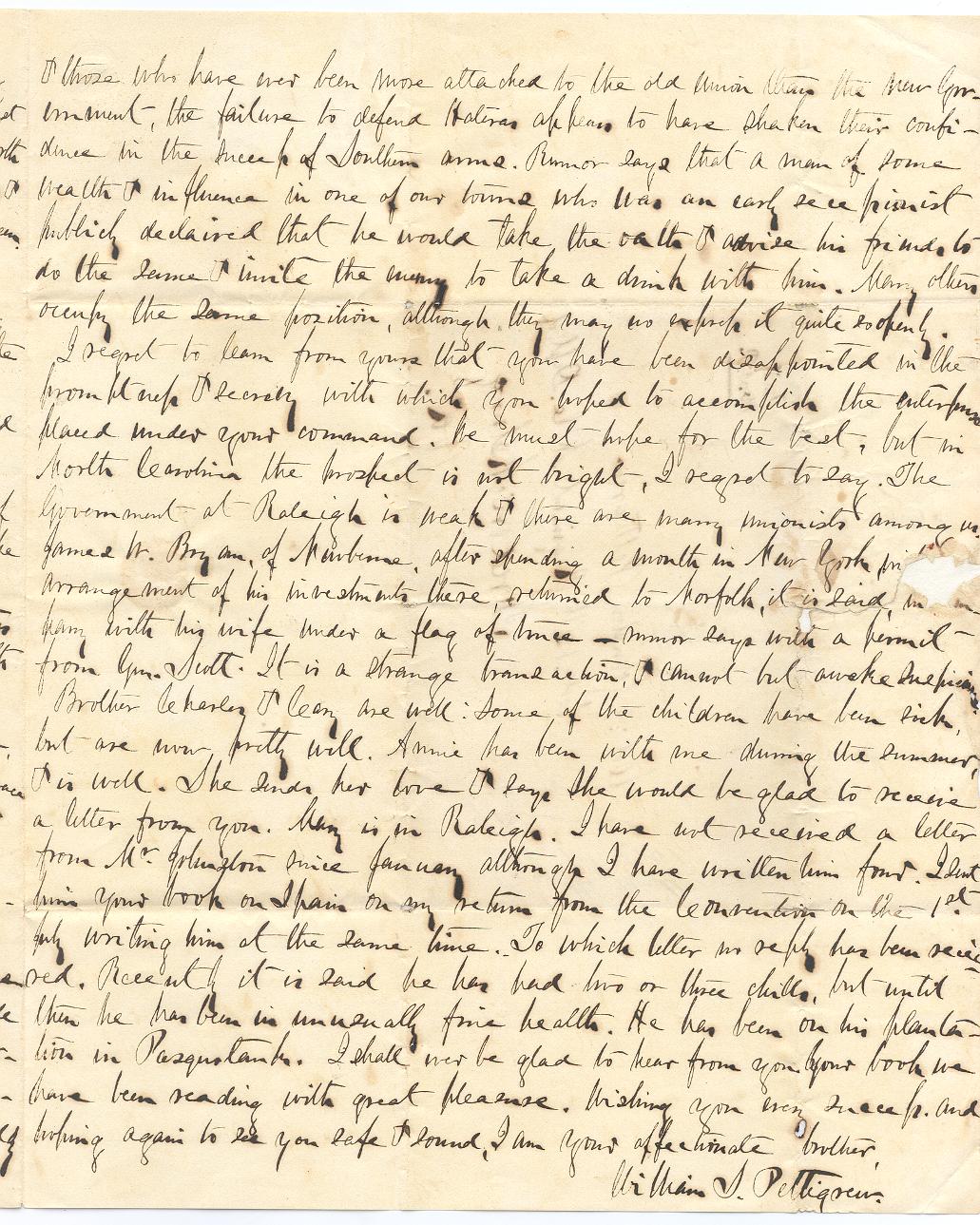 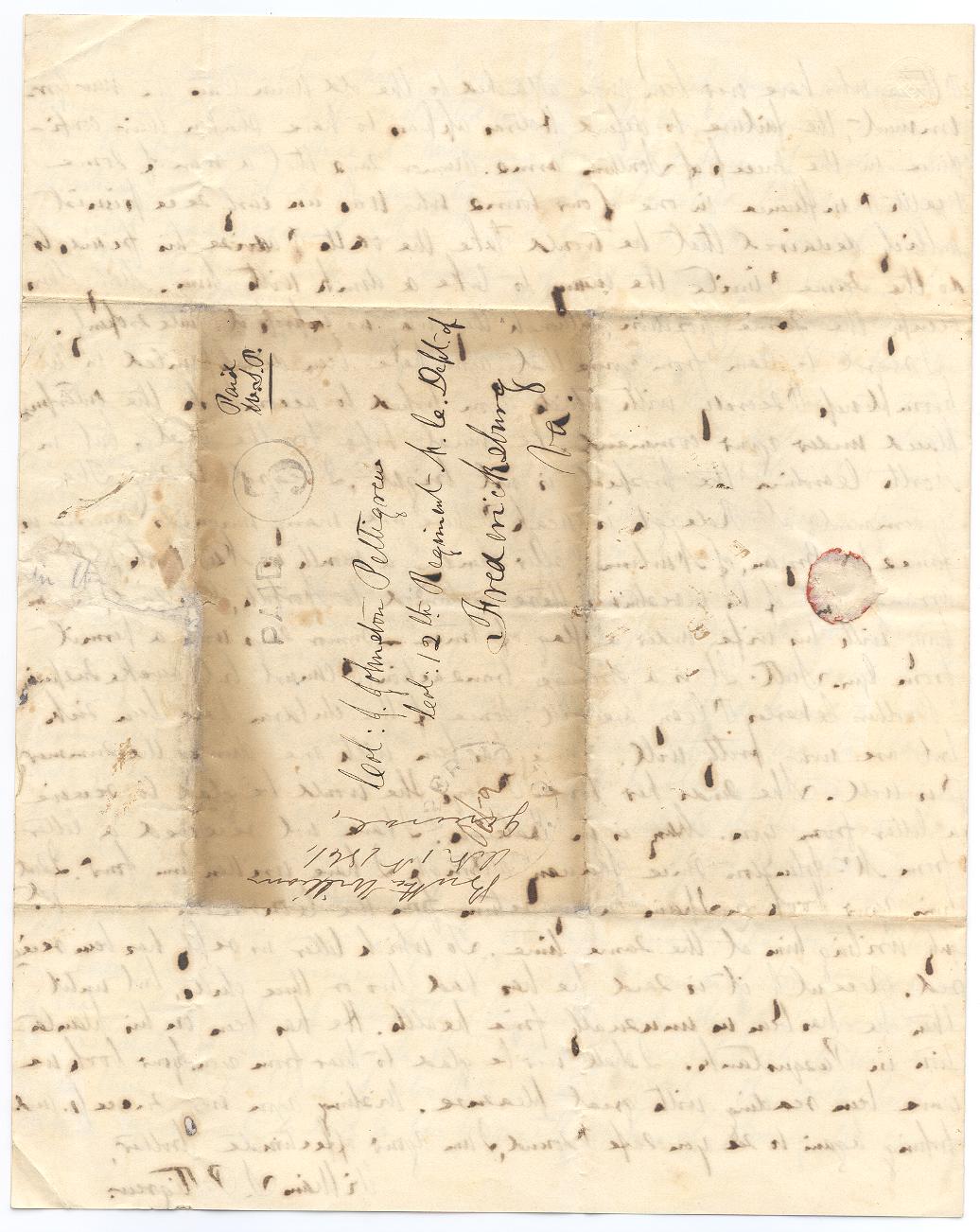 I was very glad to receive a few days since your letter of the 20th ult., and hasten to reply to it. Your letter was received by our last mail on Saturday last. And I immediately commenced casting about for a servant to send to you. I thought my man George, would be a suitable person and had intended sending him on Wednesday next – to-morrow – as far as Norfolk in company with Mr. D. G. Cowand, who is one of our volunteers stationed near Norfolk. Mr. C was tom carry him as far as there, and then wait until an opportunity presented itself by which he could be forwarded to your camp. On Sunday, I saw brother Charles at Church & handed him your letter. He proposed to send Peter, his servant, who he thought would answer your purpose. I do not know what arrangement he will make as to sending him but presume it will be similar to that contemplated by me, had I sent George. Mr. Cowand says that persons are frequently passing between Norfolk & the Potomac, and he thinks he will delay only a few days at the former place.

It will afford me pleasure at all times to serve you, particularly at a time like the present when you are periling your life for your country.

On last Saturday week brother Charles, John B. Chesson & myself left Richmond on our return home, having been in the city since Wednesday morning. We have a self-constituted committee to the government to request them to adopt more official measures for the defence of eastern North Carolina. We wished an energetic General who would be among us & see what was required. The President was sick & could not be seen. But we conferred with the Secretary of War & Adj. Gen. Cooper, who assured us that the government were well aware of the importance of North Carolina & that they would make every effort to defend the state. It was not in our power to visit you on the Potomac, as our absence from home was quite as long as we were willing it should be. We had not completed the object of our mission until 2 P.M. on Saturday, and we left at 4. I was glad to make the acquaintance of a Capt. Barnes of your Regiment, who was on his way home. He spoke in the highest terms of his Colonel.

Like yourself, I have no patience with the disgraceful Hatteras surrender. It is discreditable to all who have been concerned with it from the first. It was badly constructed & badly defended. The Government at Raleigh are to blame, the officers are to blame, and it is said by some, that the men are to blame. It is a disgraceful page in the history of the state. The effect of the surrender has been most injurious if all I hear is true. It is said that an unsound feeling is beginning to manifest itself, which is calculated to excite the regret of all who are true to the South. Unless the Confederate Government act quickly & vigorously for the defence of the eastern part of the state, they will find, should Butler invade it, as state of things which they will deeply regret & which will surprise them. The subject of who will & who will not take the oath to Lincoln’s Government, is said to be frequently spoken of , Among the cowardly & those who have ever been more attached to the old Union than the new Government, the failure to defend Hatteras appears to have shaken their confidence in the success of Southern arms. Rumor says that a man of some wealth & influence in one o four towns who was an early secessionist publicly declared that he would take the oath & advise his friends to do the same & invite the enemy to take a drink with him. Many others occupy the same position, although they may no express it quite so openly.

I regret to learn from yours that you have been disappointed in the promptness & secrecy with which you hoped to accomplish the enterprise placed under your command. We must hope for the best, but in North Carolina the prospect is not bright, I regret to say. The Government at Raleigh is weak & there are many Unionists among us. James W. Bryan of Newberne, after spending a month in New York [making?] arrangement of his investments there, returned to Norfolk, it is said, [?], with his wife under a flag of truce. Rumor says with a permit from Gen. Scott. It is a strange transaction, & cannot but awake suspicion.

Brother Charles & Cary are well. Some of the children have been sick, but are now pretty well. Annie has been with me during the summer, & is well. She sends here love & says she would be glad to receive a letter from you. Mary is in Raleigh. I have not received a letter from Mr. Johnston since January although I have written him four. I lent him your book on Spain on my return from the Convention on the 1st July writing him at the same time. To which letter no reply has been received. Recently it is said he has had two or three chills, but until then he has been in unusually fine health. He has been on his plantation in Pasquotank. I shall ever be glad to hear from you. Your book we have been reading with great pleasure. Wishing you every success, and hoping again to see you safe & sound, I am your affectionate brother,

One Response to 1 October 1861: “And I immediately commenced casting about for a servant to send to you.”