3 October 1861: “An improvement in the treatment of the prisoners at the Castle & the Baltimore political prisoners. Taken out to walk & sun, twice a day.”

Posted on 3 Oct ’11 by Biff Hollingsworth

Thomas Sparrow (1819-1884), a native of New Bern and resident of Washington, N.C., was a lawyer, state legislator, and Confederate officer. Sparrow was educated at Princeton University, 1839-1842. In 1847 he moved to Washington, N.C., and there had a law practice with Edward Stanly. He served as chairman of the Eighth Congressional District Whig Committee and in 1856-1857 as a representative in the North Carolina General Assembly. At the outbreak of the Civil War, Sparrow raised a company of Beaufort County, N.C., volunteers, the Washington Grays, and served as captain. His company was involved in the defense of Fort Hatteras where they were surrendered and captured. He was imprisoned at Fort Columbus, N.Y., and Fort Warren, Mass., until February 1862. Upon parole, he returned to North Carolina and served as major in the 10th North Carolina Regiment. After the war he returned to law practice and again served in the General Assembly, 1870-1872 and 1879-1890. While serving as the chairman of the House Judiciary Committee, 1870, he was manager for the house of the impeachment of Governor William W. Holden. 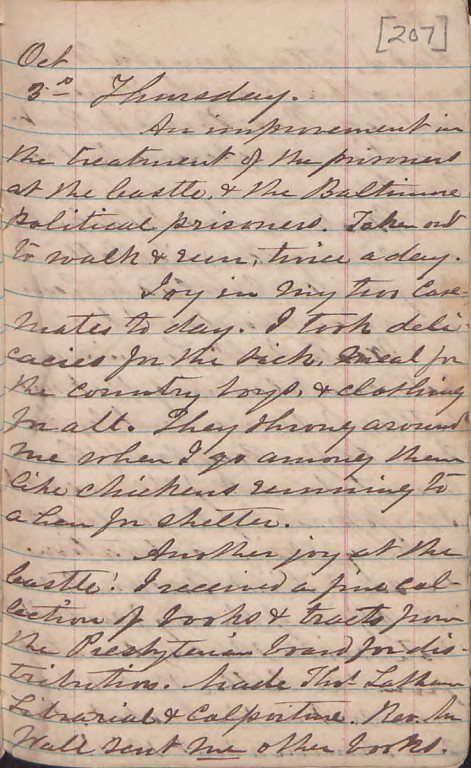 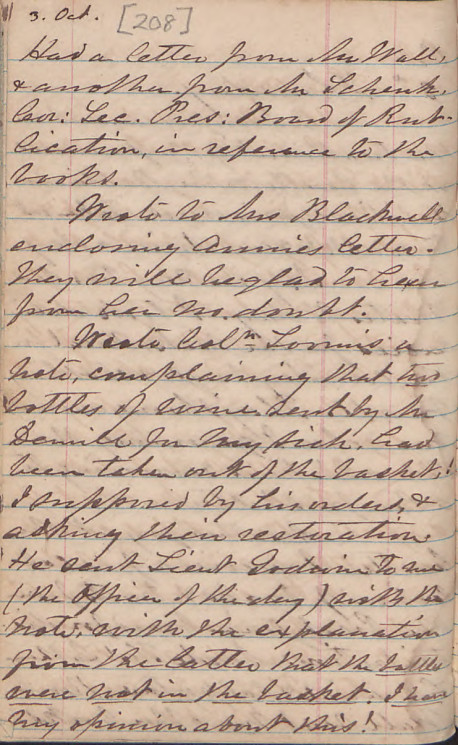 An improvement in the treatment of the prisoners at the Castle & the Baltimore political prisoners. Taken out to walk & sun, twice a day.

Joy in my two casemates to day. I took delicacies for the sick, meal for the country boys, & clothing for all. They throng around me when I go among them like chickens running to a hen for shelter.

Another joy at the Castle! I received a fine collection of books & tracts from the Presbyterian board for distribution. [Made Thos. Latham librarian[?] & [?]] Rev. Mr.[?] Wall sent me other books.

Had a letter from Mr. Wall, & another from Mr. Schenk, [?] Lec., Pres. Board of Rublication [sic] in reference to the books.

Wrote to Mr. Blackwell enclosing Annie’s letter. They will be glad to hear from her, no doubt.

Wrote Coln. Loomis a note, complaining that two bottles of wine sent by Mr. [?] for my sick had been taken out of the basket! I supposed by his orders, & asking their restoration. He sent Lieut. Godwin to me (the officer of the day) with the note, with the explanation from the latter that the bottles were not in the basket. I have my opinion about this!

One Response to 3 October 1861: “An improvement in the treatment of the prisoners at the Castle & the Baltimore political prisoners. Taken out to walk & sun, twice a day.”