17 October 1861: “In the battle at the cross lanes wee kill and wounded and taken prisoners about two hundred and our lost was about four kill and seventeen wounded.”

Posted on 17 Oct ’11 by Biff Hollingsworth

Chang and Eng Bunker (1811-1874), the original Siamese twins, were born in Meklong, Siam, and were brought from Bangkok to Boston in 1829. After extensive tours in North America and Europe, they settled in Wilkes County (later Surry County), N.C., were naturalized, and received the surname Bunker by act of the legislature.

In 1843, Chang and Eng Bunker married Sarah and Adelaide Yates, daughters of David Yates of Wilkes County, N.C. Chang had ten children; Eng had nine children. They continued to make exhibition tours until about 1870.

The Southern Historical Collection has a small collection of Bunker family materials, including: correspondence, bills, and receipts, including slave bills of sale, of Siamese twins Chang Bunker and Eng Bunker relating to their North Carolina property, planting interests, family matters, and arrangements for exhibition tours. Also included are an account book, 1833-1839, showing income from public appearances and itinerary; clippings; photographs; articles about the twins by Worth B. Daniels and Jonathan Daniels and related material; and Joined at Birth, a 1998 videotape about the twins that was made by Advanced Medical Productions of Chapel Hill, N.C., for the Discovery Channel. 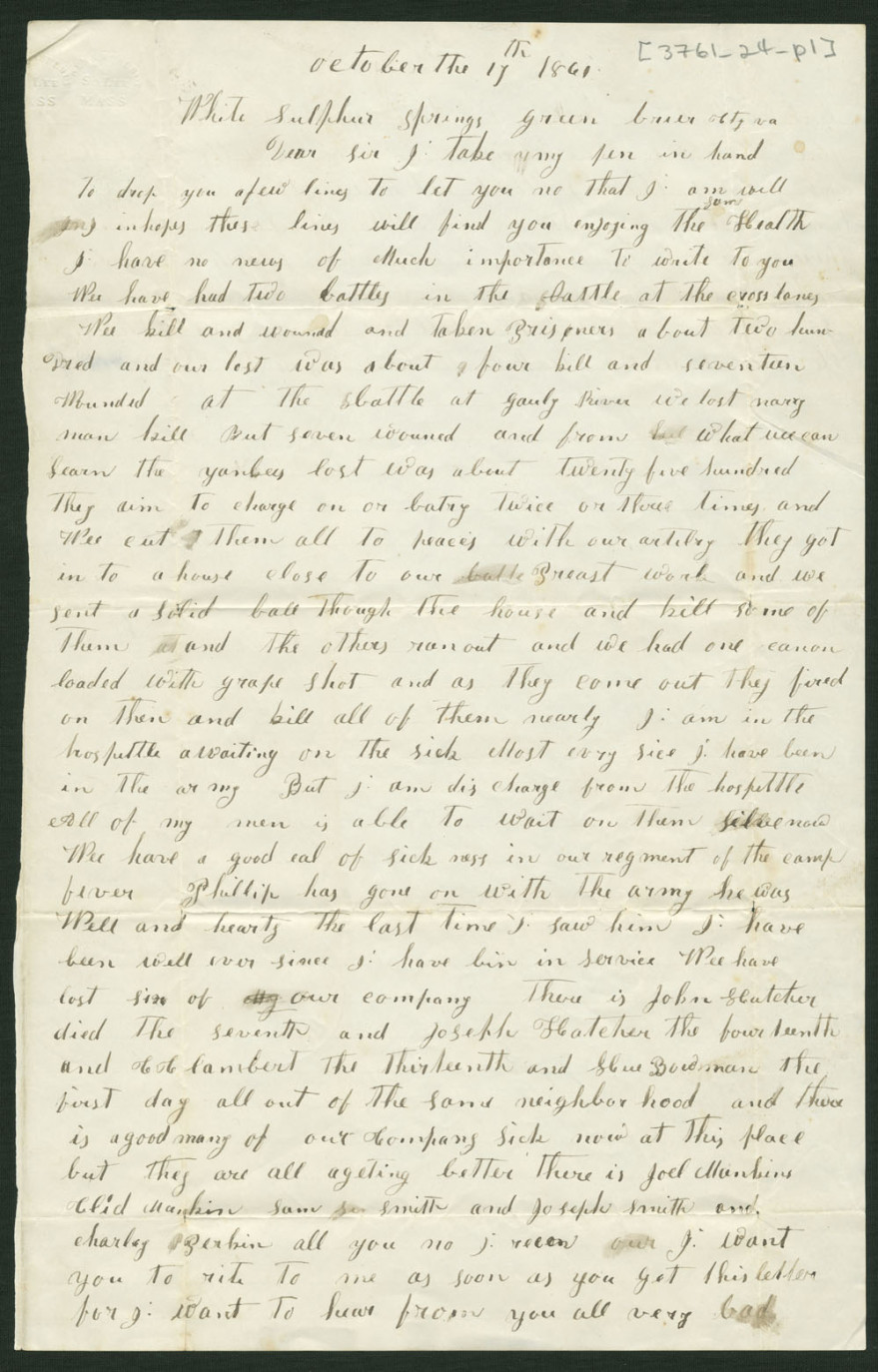 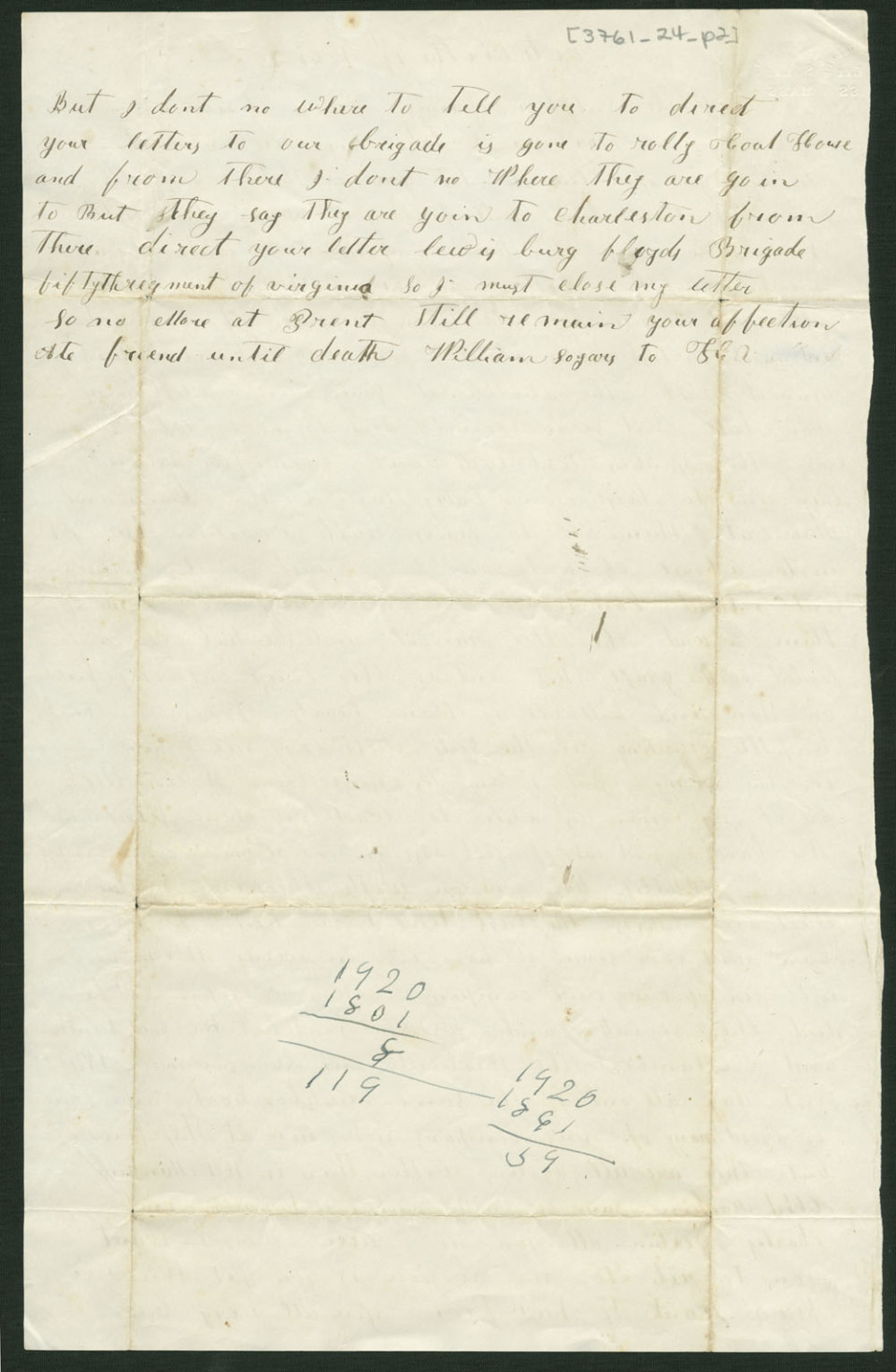 Dear Sir, I take my pen in hand to drop you a few lines to let you no that I am well and in hopes these lines will find you enjoying the same health. I have no news of much importance to write to you. We have had two battles. In the battle at the cross lanes wee kill and wounded and taken prisoners about two hundred and our lost was about four kill and seventeen wounded. At the battle at gauly river we lost many man kill but seven wouned and from what we can learn the yankees lost was about twenty five hundred. They aim to charge on our batry twice or three times and wes cut them all to peaces with our artilry. They got in to a house close to our breast work and we sent a solid ball through the house and kill some of them and the others run out and we had one canon loaded with grape shot and as they come out they fired on them and kill all of them nearly. I am in the hospittle awaiting on the sick. Most [?] since i have been in the army. But i am discharge from the hospittle. All of my men is able to wait on them silves now. We have a good eal of sick ness in our regment of the camp fever. Phillip has gone on with the army. He was well and hearty the last time I saw him. I have been well ever since I have bin in service. Wee have lost six of our company. There is John Hatcher died the seventh and Joseph Hatcher the fourteenth and C. C. Lambert the thirteenth and [?] Bodman the first day all out of the same neighborhood and there is a good many of our company sick now at this place but they are all ageting better. There is Joel Mankins, Clid Mankins, Sam Smith and Joseph Smith and Charley Berkin all you no I recon. I want you to rite to me as soon as you get this letter for I want to here from you all very bad. But I dont no where to tell you to direct your letters to. Our brigade is going to rally about [?] and from there I don’t no where they are goin to but they say they are goin to Charleston from there. Direct your letter Lewisburg [?] Brigade fiftyth regment of virginia. So I must close my letter. So no more at prest. Still remain your affectionate friend until death, William Soyars