28 October 1861:”Since the commencement of the war of the Yankees and abolitionists on the Southern people, I have not been able to hear from you…”

Item description: Letter, 28 October 1861, from Joseph Bird, in Shanghai, China, to his sister, possibly in Bertie County, N.C. Bird was a United States Navy officer on a ship, believed to be the U.S.S. Saginaw.

In the letter, Bird describes the great difficulty in getting letters from China to the American South during the Civil War, even suggesting that he must conceal the letters so that they are not intercepted by Federal authorities. 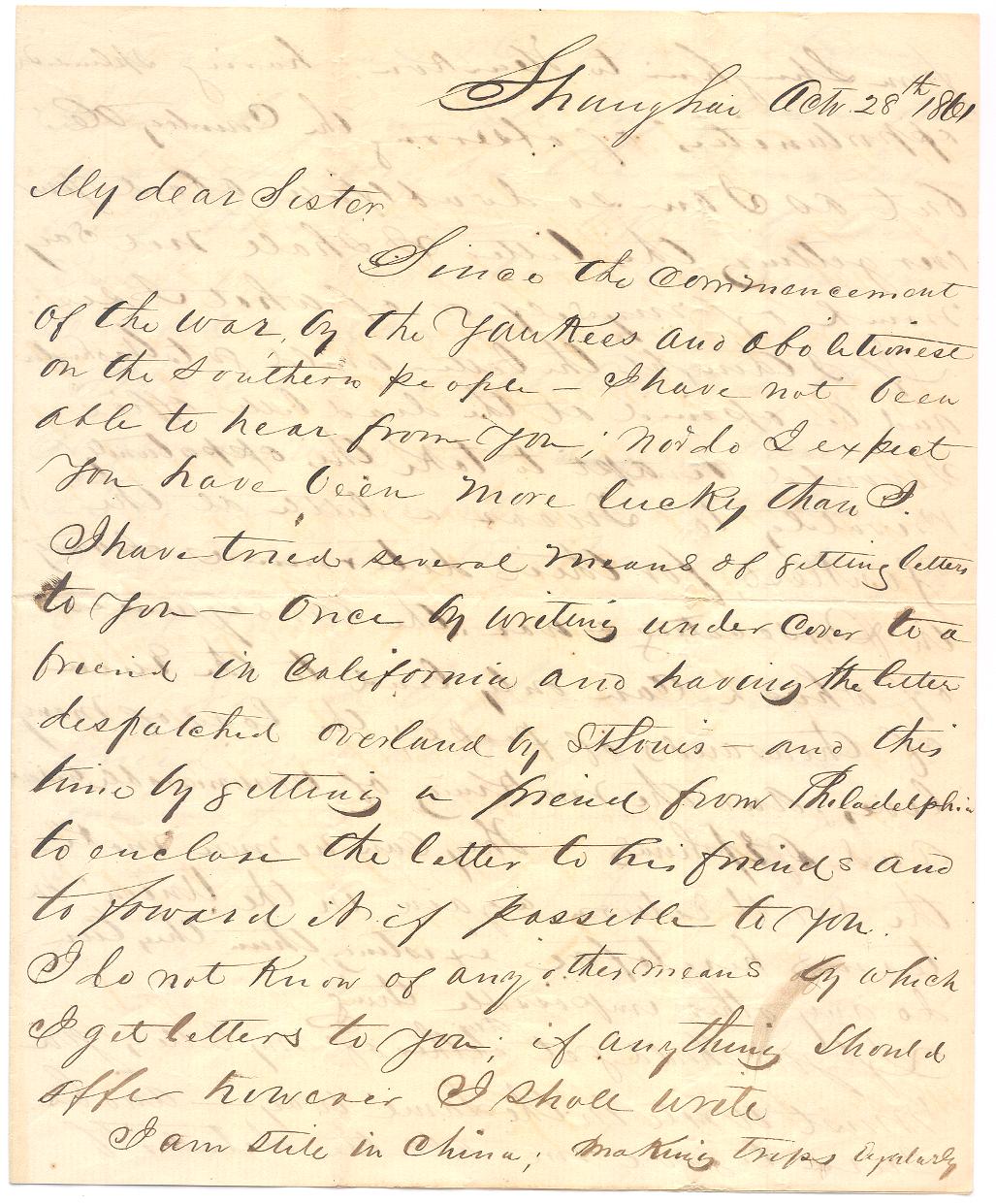 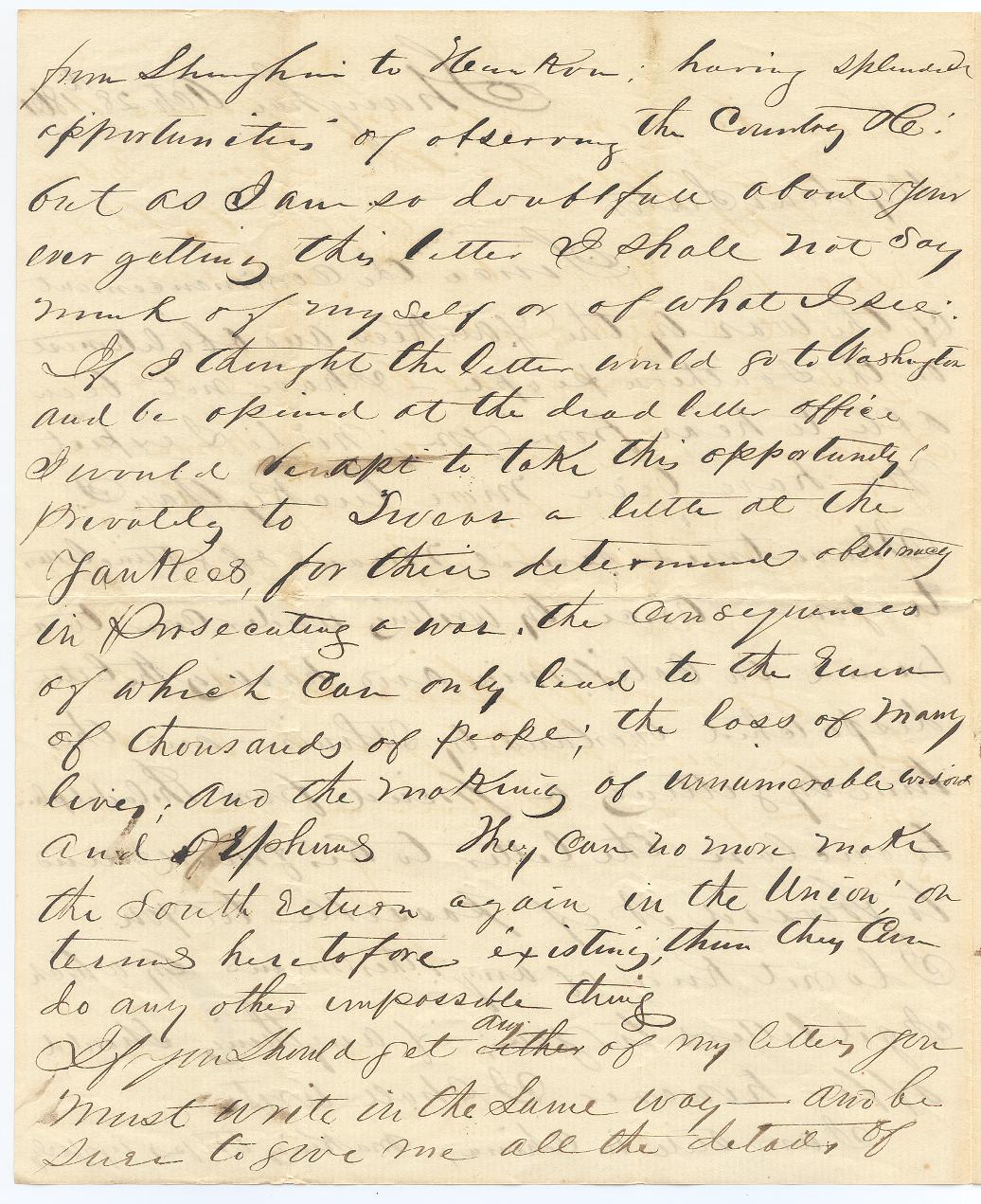 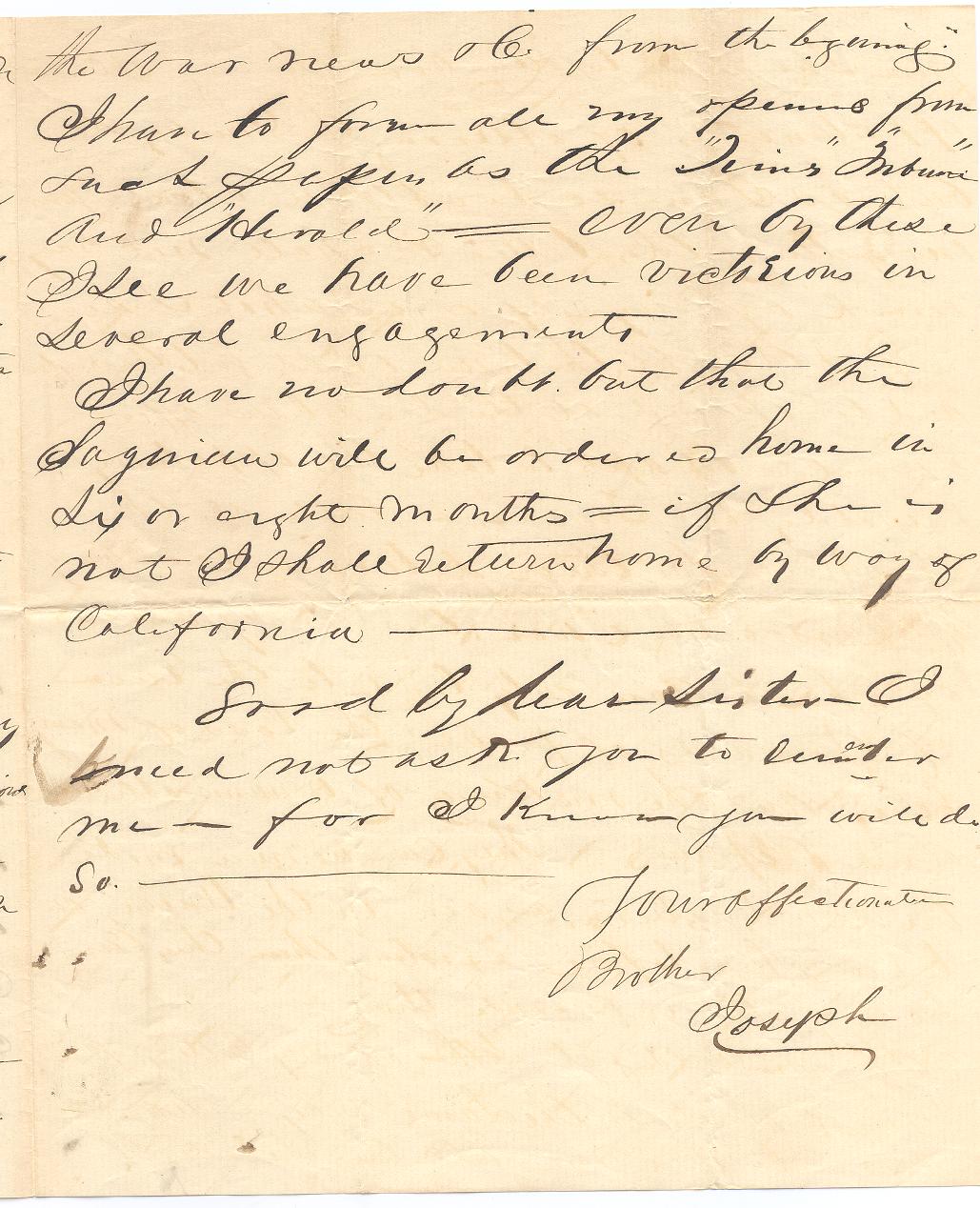 Since the commencement of the war by the Yankees and abolitionists on the Southern people – I have not been able to hear from you; nor do I expect you have been more lucky than I.

I have tried several means of getting letters to you. Once by writing under cover to a friend in California and having the letter dispatched overland by St. Louis – and this time by getting a friend from Philadelphia to enclose the letter to his friends and to forward it if possible to you.

I do not know of any other means by which I get letters to you; if anything should offer however I shall write.

I am still in China; making trips [?] from Shanghai to [?]; having splendid opportunities of observing the Country &c but as I am so doubtful about your ever getting this letter, I shall not say much of myself of of what I see.

If I thought the letter would go to Washington and be opened at the dead letter office, I would be apt to take this opportunity privately to swear a little at the Yankees, for their determined obstinacy in prosecuting a war. The consequences of which can only lead to the ruin of thousands of people; the loss of many lives; and the making of innumerable widows and orphans. They can no more make the South return again in the Union, in terms heretofore existing, thus they can do any other impossible thing.

If you should get any of my letters you must write in the same way – and be sure to give me all the details of the war news &c. from the beginning.

I have to form all my opinions from such papers as the “Times”, “Tribune” and “Herald” – even by these I see we have been victorious in several engagements.

I have no doubt but that the Saginaw will be ordered home in six of eight months – it she is not I shall return home by way of California.

Good by dear sister. I need not ask you to remember me – for I know you will do so.

One Response to 28 October 1861:”Since the commencement of the war of the Yankees and abolitionists on the Southern people, I have not been able to hear from you…”