23 November 1861: “With a sorrowful heart I take my pen today to inform you that I have been very suddenly bereft of a Dear Friend”

Posted on 23 Nov ’11 by Biff Hollingsworth

Item description: Letter from Emmett Cole, a Union soldier in Company F, 8th Michigan Infantry Regiment, to his sister Celestia, 23 November 1861, describing the death and burial of a good friend and the prevalence of sickness in camp at Hilton Head, S.C. Soldiers suffered from bad colds, putrid sore throats, bilious fevers, and small pox was “just commencing to go the rounds.” 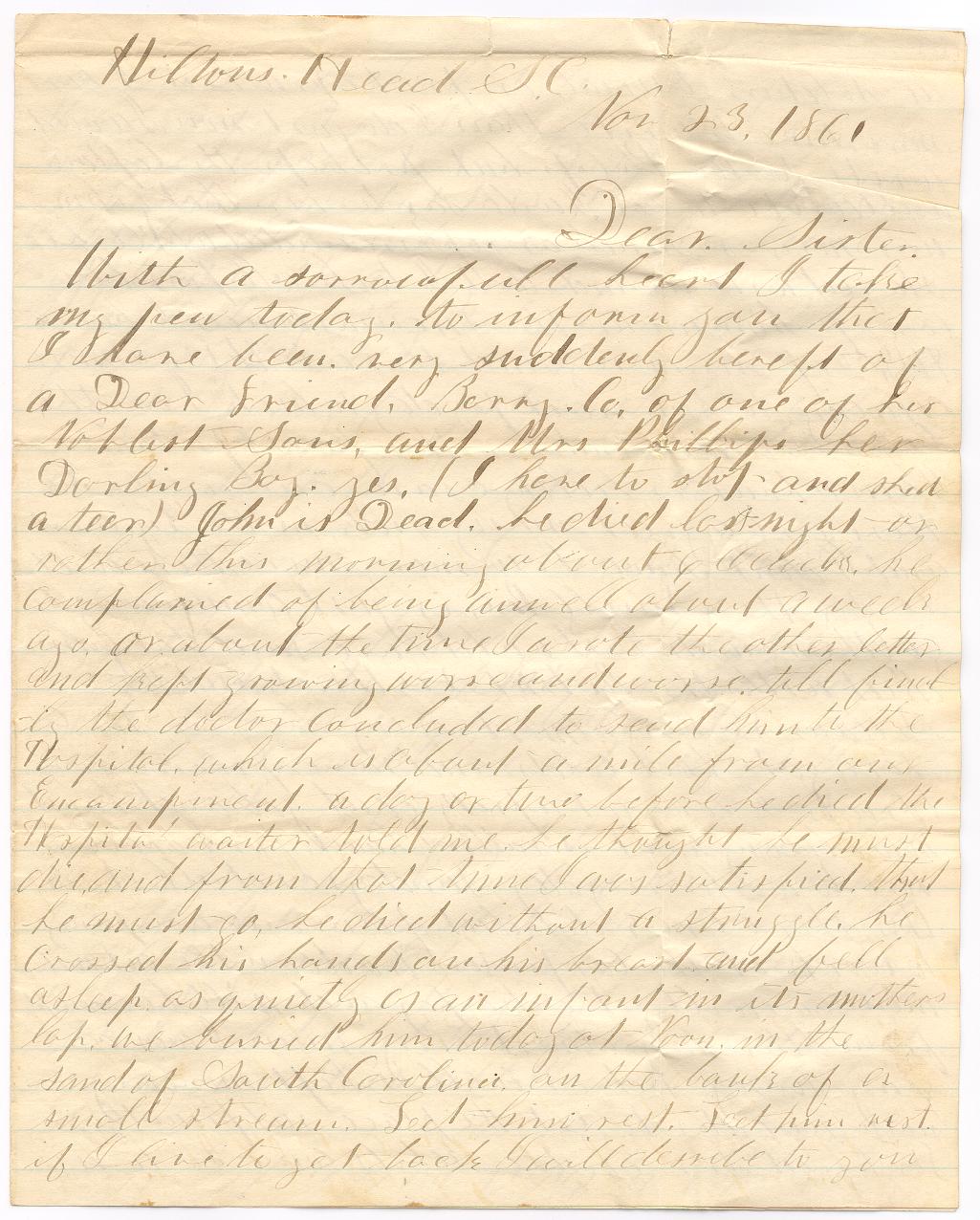 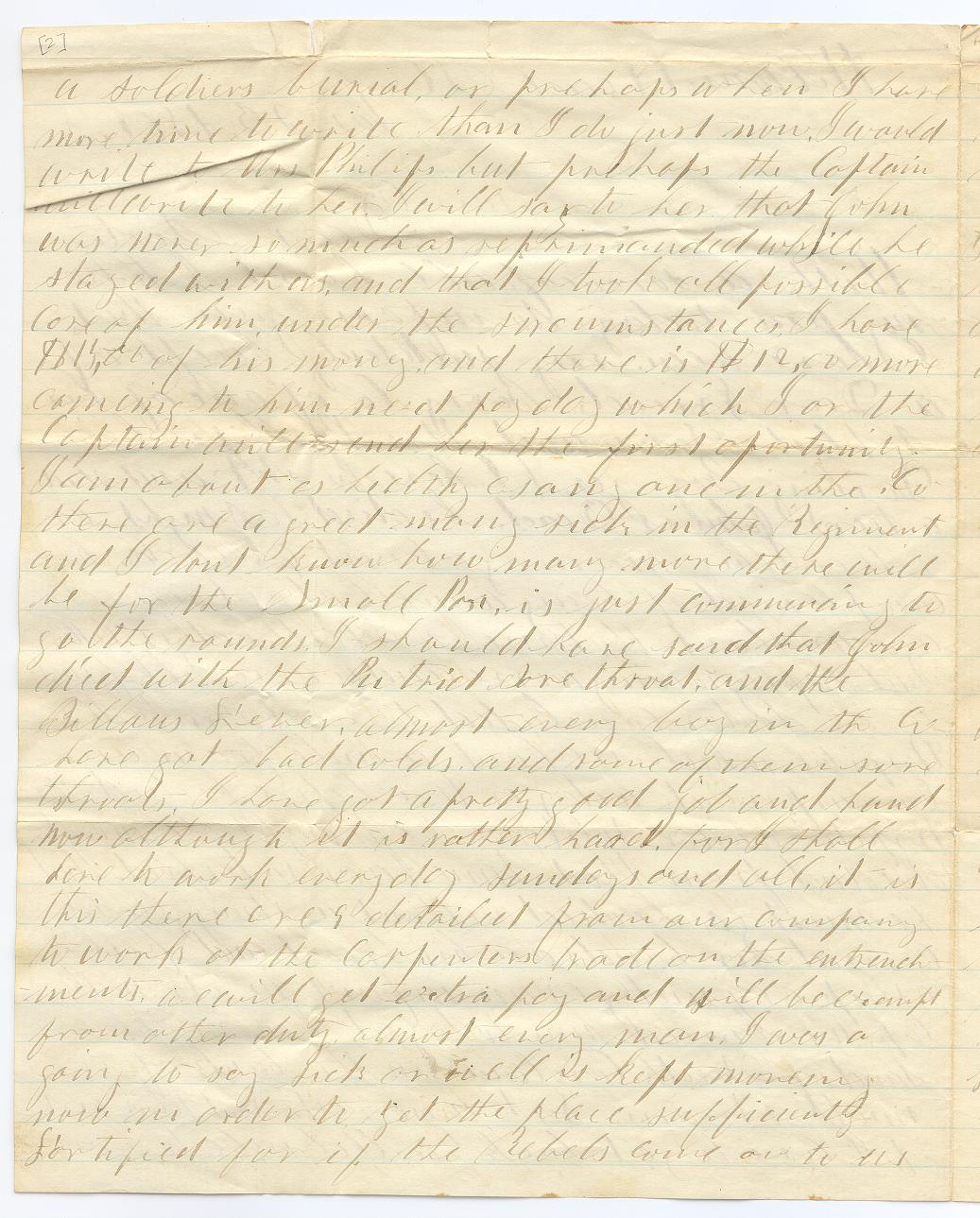 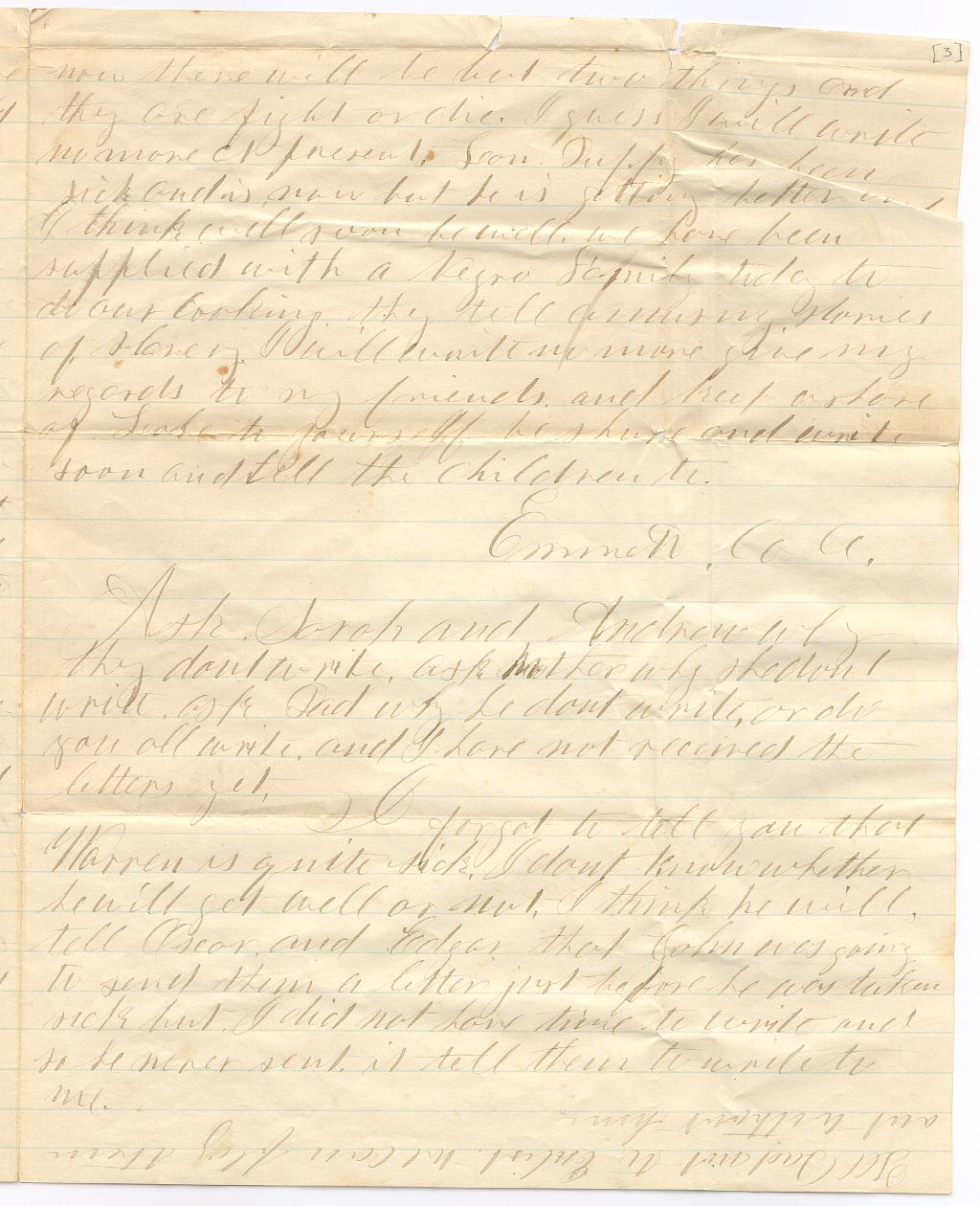 Dear Sister.
With a sorrowful heart I take my pen today to inform you that I have been very suddenly bereft of a Dear Friend, Berry Co. of one of her Noblest Sons, and Mrs Phillips her Darling Boy. yes. (I have to stop and shed a tear) John is Dead. He died last night or rather this morning about 6 Oclock. he complained of being unwell about a week ago or about the time I wrote the other letter and kept growing worse and worse. till finally the doctor concluded to send him to the Hospital, which is about a mile from our Encampment. a day or two before he died the Hospital waiter told me he thought he must die and from that time I was satisfied that he must go. he died without a struggle. he crossed his hands on his breast and fell asleep as quietly as an infant in its mothers lap. we buried him today at Noon. in the sand of South Carolina. on the bank of a small stream. Let him rest. Let him rest. if I live to get back I will describe to you a soldiers burial, or perhaps when I have more time to write than I do just now. I would write to Mrs Philips but perhaps the Captain will write to her. I will say to her that John was never so much as reprimanded while he stayed with us, and that I took all possible care of him, under the sircumstances. I have $15.00 of his money and there is $12.00 more comeing to him next pay day which I or the Captain will send her the first oportunity. I am as healthy as any one in the Co. there are a great many sick in the Regiment and I dont know how many more there will be for the Small Pox, is just commencing to go the rounds. I should have send that John died with the Putrid sore throat, and the Billous Fever, almost every boy in the Co. here got bad colds and some of them sore throats. I have got a pretty good job and hand now although it is rather hard. for I shall have to work everyday sundays and all. it is this there are 9 detailed from our company to work at the Carpenters trade on the entrenchments. we will get extra pay and will be exempt from the other duty. almost every man. I was going to say sick or well is kept moveing now in order to get the place sufficiently Fortified for if the Rebels come on to us now there will be but two things and they are fight or die. I guess I will write no more at present. Leon Duffy has been sick and is now but he is getting better and I think will soon be well. we have been supplied with a Negro Family today to do our cooking. they tell amusing stories of slavery. I will write no more give my regards to my friends and keep a share of Lease to yourself. be shure and write soon and tell the children to.

Ask Sarah and Andrew why they dont write. ask Mother why she dont write. ask dad why he dont write, or do you all write and I have not received the letters yet.
I forgot to tell you that Warren is quite sick. I dont know whether he will get well or not. I think he will. tell Oscar, and Edgar that John was going to send them a letter just before he was taken sick but I did not have time to write and so he never sent it tell them to write to me. tell Dad not to Enlist. we can play them without him.