26 November 1861: The members of Congress, which was to meet on Monday last, came in slowly and but little is doing – though there is much that needs doing.

Posted on 26 Nov ’11 by Biff Hollingsworth

Item description: Entry, 26 November 1861, from the diary of Thomas Bragg (Attorney General of the Confederate States of America, 1861-1863), written while Bragg was in Richmond, Va. 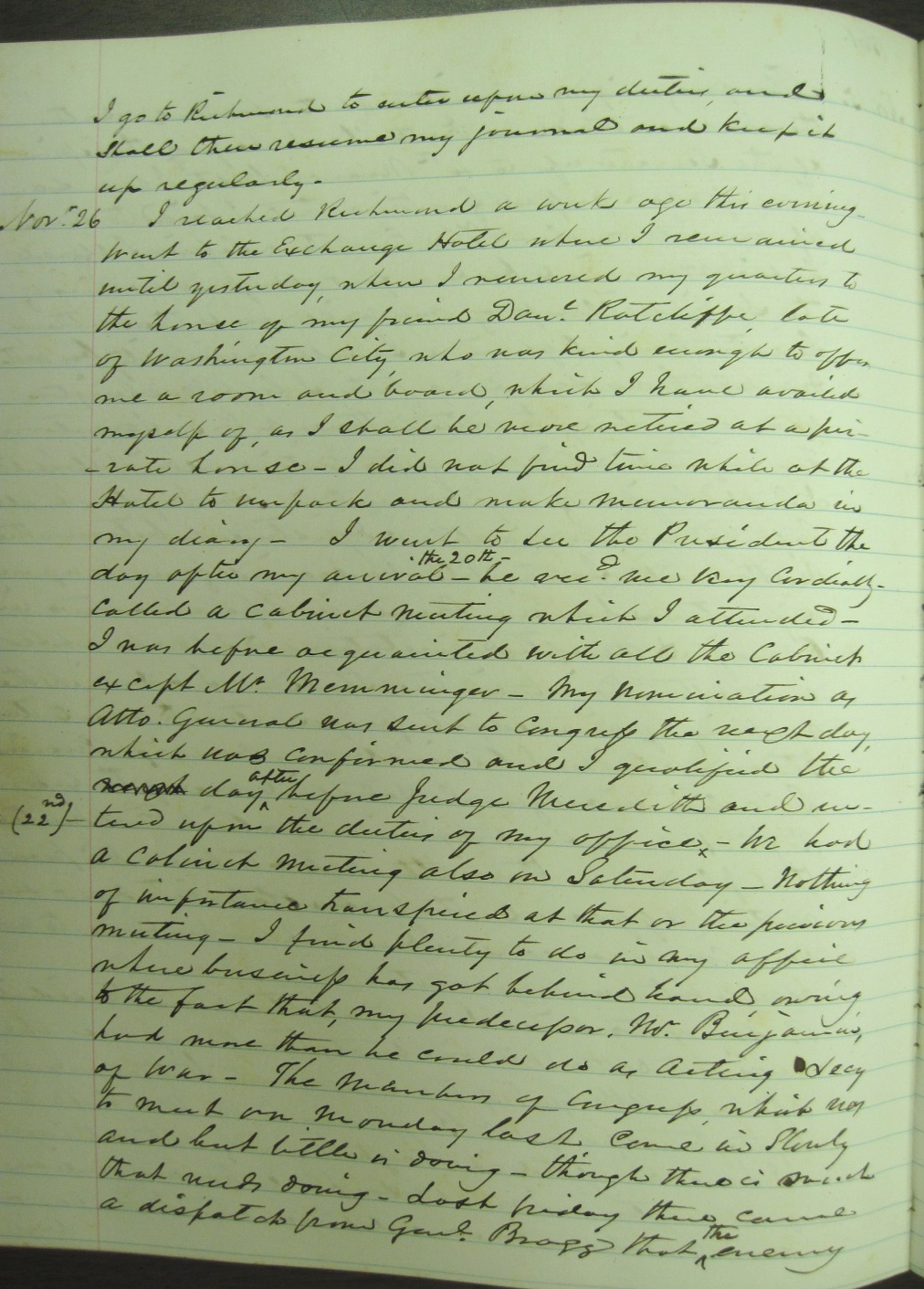 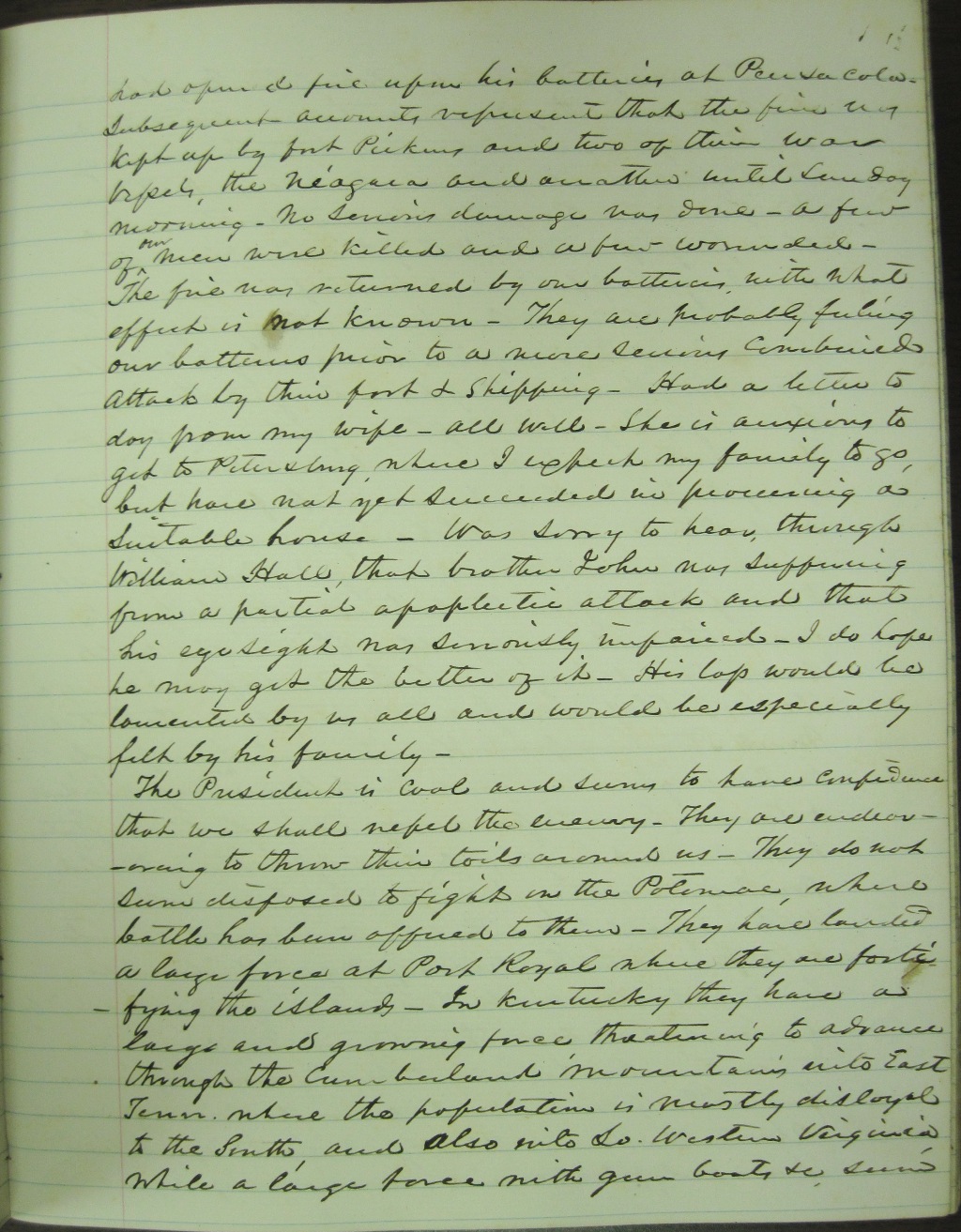 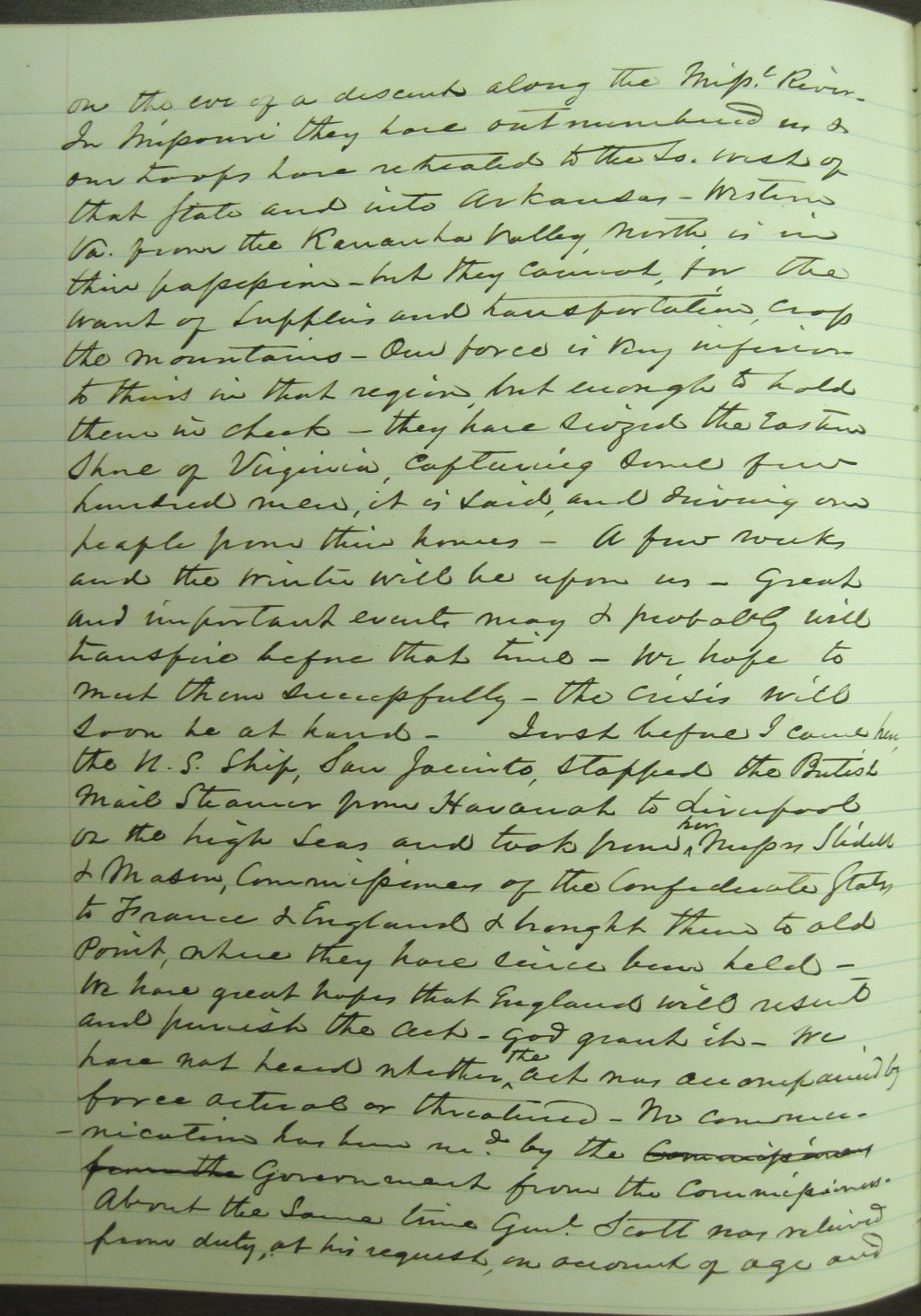 I reached Richmond a week ago this evening. Went to the Exchange Hotel where I remained until yesterday, when I removed my quarters to the house of my friend Dan’l Ratcliffe, late of Washington City, who was kind enough to offer me a room and board, which I have availed myself of, as I shall be more retired at a private house. I did not find time while at the Hotel to unpack and make memoranda in my diary —

I went to see the President the day after my arrival – the 20th – he rec’d me very cordially – called a Cabinet meeting which I attended. I was before acquainted with all the Cabinet except Mr. Memminger –

My nomination as Atto. General was sent to Congress the next day, which was confirmed and I qualified the day after before Judge Meredith and entered upon the duties of my office 22nd. We had a Cabinet meeting also on Saturday. Nothing of importance transpired at that or the previous meeting. I find plenty to do in my office, where business has got behind hand, owing to the fact that my predecessor, Mr. Benjamin, had more than he could do as acting Sec’y of War. The members of Congress, which was to meet on Monday last, came in slowly and but little is doing – though there is much that needs doing. Last Friday there came a dispatch from Gen’l Bragg that the enemy had opened fire upon his batteries at Pensacola – subsequent accounts represent that the fire was kept up by fort Pickens and two of their war vessels, the Niagara and another until Sunday morning. No serious damage was done – a few of our men were killed and a few wounded. The fire was returned by our batteries, with what effect is not known. They are probably feeling our batteries prior to a more serious combined attack by their fort & shipping.

Had a letter today from my wife – all well – She is anxious to get to Petersburg, where I expect my family to go, but have not yet succeeded in procuring a suitable house. Was sorry to hear, through William Hall, that brother John was suffering from a partial apoplectic attack and that his eyesight was seriously impaired. I do hope he may get the better of it. His loss would be lamented by us all and would be especially felt by his family.

The President is cool and seems to have confidence that we shall repel the enemy. They are endeavoring to throw their toils around us. They do not seem disposed to fight on the Potomac, where battle has been offered to them. They have landed a large force at Port Royal where they are fortifying the island. In Kentucky they have a large and growing force threatening to advance through the Cumberland mountains into East Tenn. where the population is mostly disloyal to the South, and also into So. Western Virginia, while a large force with gun boats &c, seem on the eve of a descent along the Miss’i River. In Missouri they have outnumbered us & our troops have retreated to the So. West of that State and into Arkansas – Western Va. from the Kanawha Valley North is in their possession – but they cannot, for the want of supplies and transportation, cross the mountains. Our force is very inferior to theirs in that region, but enough to hold them in check – they have seized the Eastern shore of Virginia, capturing some few hundred men, it is said, and driving our people from their homes. A few weeks and the winter will be upon us. Great and important events may & probably will transpire before that time. We hope to meet them successfully – the crisis will soon be at hand. Just before I came here the U.S. Ship, San Jacinto, stopped the British Mail Steamer from Havannah to Liverpool on the high seas and took from her Messrs. Slidell & Mason, Commissioners of the Confederate States to France & England & brought them to Old Point, where they have since been held. We have great hopes that England will resent and punish the act – God grant it – We have not heard whether the act was accomplished by force actual or threatened. No communication has been rec’d by the Government from the Commissioners. About the same time Gen’l Scott was relieved from duty, at his request, on account of age and is about to go to Europe. What a pity for the fair fame of the old man that he had not retired before the rupture between the two sections! — He leaves the stage of action now with the bitter execrations of his native State and of the almost entire South.