29 November 1861: He says a large number of arrests have been made and feared the consequence if the parties were tried by Court Martial

Posted on 29 Nov ’11 by Biff Hollingsworth

Item description: Entry, 29 November 1861, from the diary of Thomas Bragg (Attorney General of the Confederate States of America, 1861-1863), written while Bragg was in Richmond, Va. 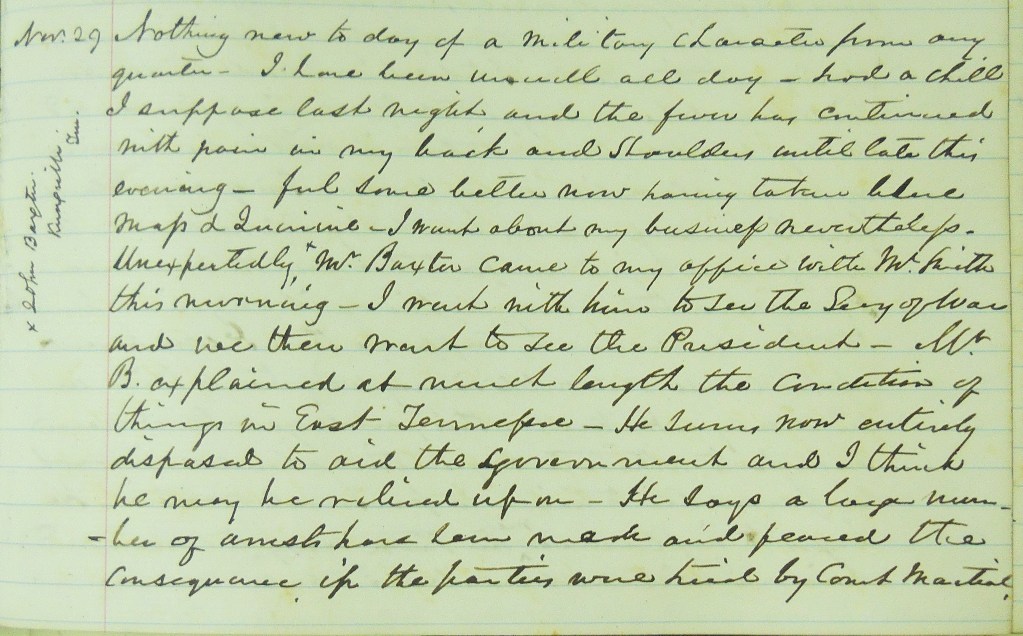 Nothing new today of a military character from any quarter. I have been unwell all day – had a chill I suppose last night, and the fever has continued, with the pain in my back and shoulders until late this evening – feel some better now having taken blue Mass & Quinine. I went about my business nevertheless. Unexpectedly, Mr. Baxter – John Baxter, Knoxville, Ten. – came to my office with Mr. Smith this morning – I went with him to see the Sec’y of War and we then went to see the President. Mr. B. explained at much length the condition of things in East Tennessee. He seems now entirely disposed to aid the Government and I think he may be relied upon. He says a large number of arrests have been made and feared the consequence if the parties were tried by Court Martial. When it was explained by Mr. Benjamin that the Bridge burners only were to be dealt with in that way he seemed satisfied. He asked permission for Brownlow to leave Ten. He is now hid in the mountains. The Sec’y of War thought it was advisable – the President would consider of it. Upon the whole I was favorably impressed by Baxter’s bearing & conversation. The Sec’y of War was to prepare letters to commanding officers and send to Ten.