30 November 1861: Today R.W.J. of Arkansas came to my office on some business, and while there, asked if I had made recommendations for Commissioners under the Sequestration Act.

Posted on 30 Nov ’11 by Biff Hollingsworth

Item description: Entry, 30 November 1861, from the diary of Thomas Bragg (Attorney General of the Confederate States of America, 1861-1863), written while Bragg was in Richmond, Va. 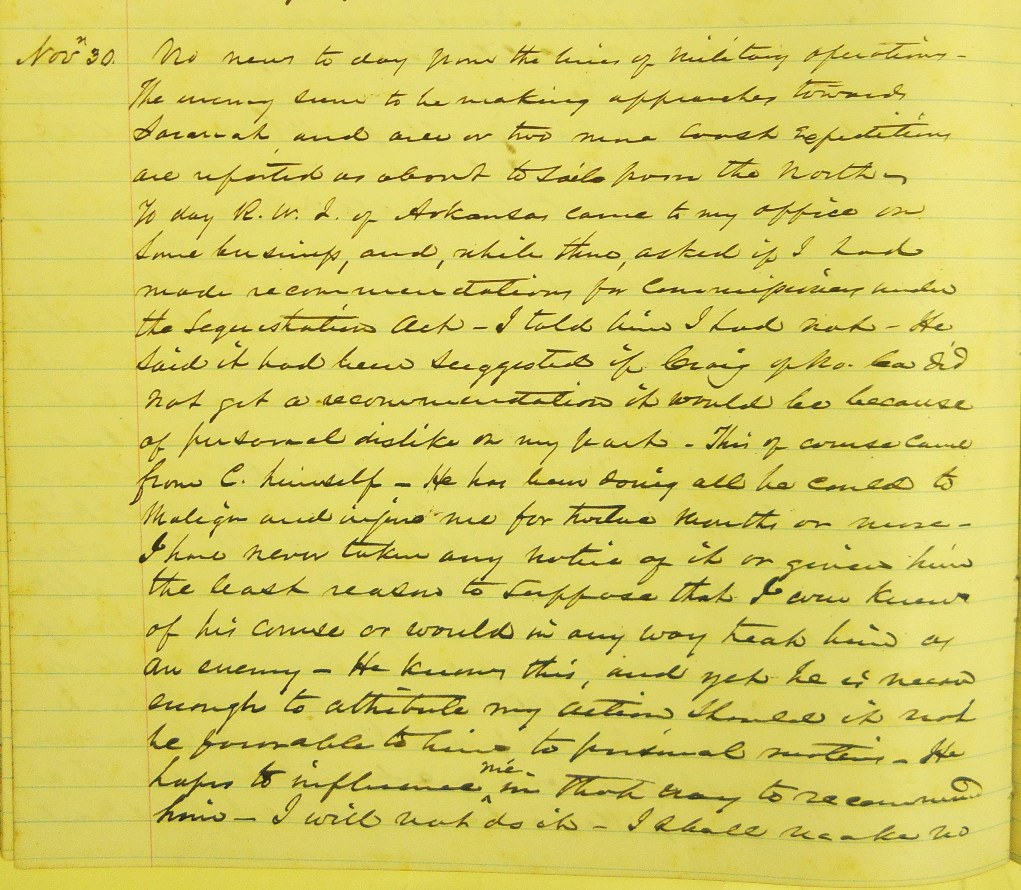 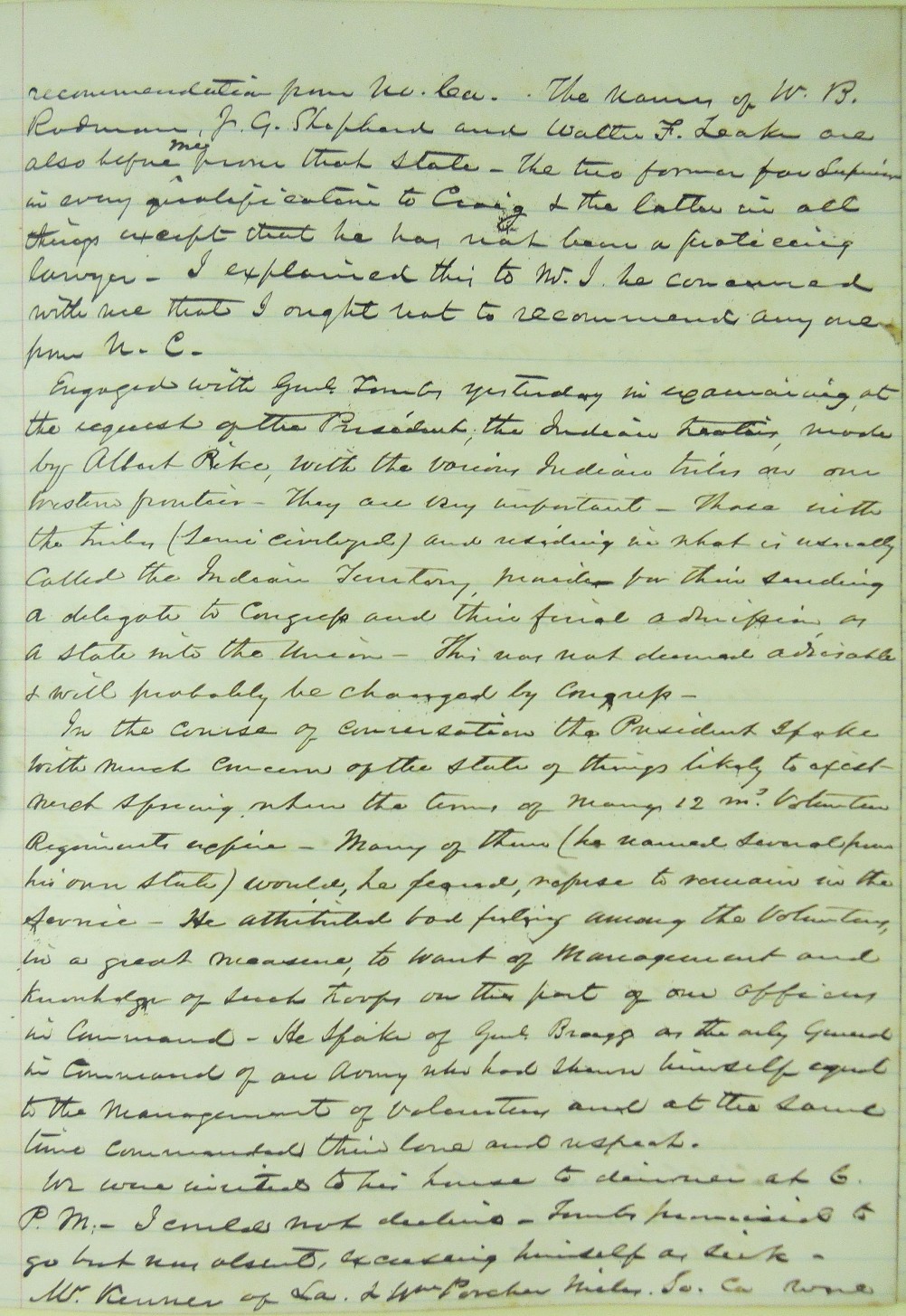 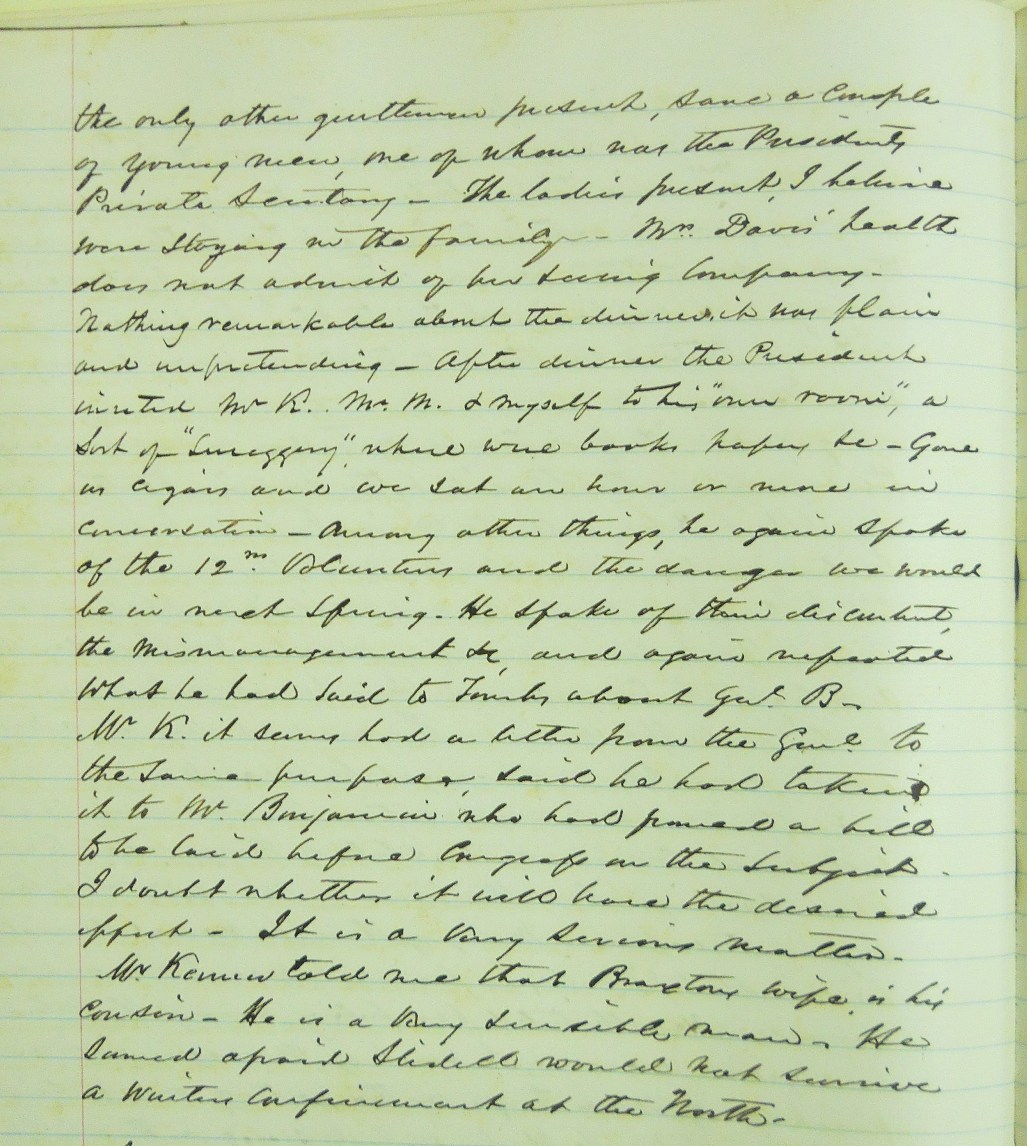 No news today from the lines of military operations. The enemy seem to be making approaches towards Savannah, and one or two more coast expeditions are reported as about to sail from the North.
Today R.W.J. of Arkansas came to my office on some business, and while there, asked if I had made recommendations for Commissioners under the Sequestration Act. I told him I had not. He said it had been suggested if Craig of No. Ca. did not get a recommendation it would be because of personal dislike on my part. This of course came from C. himself. He has been doing all he could to malign and injure me for twelve months or more. I have never taken any notice of it or given him the least reason to suppose that I even knew of his course or would in any way treat him as an enemy. He knows this, and yet he is mean enough to attribute my action, should it not be favorable to him, to personal motives. He hopes to influence me in that way to recommend him. I will not do it – I shall make no recommendation from No. Ca. The name of W.B. Rodman, J. G. Shepherd and Walter F. Leake are also before me from that State – the two former far superior in every qualification to Craig & the latter in all things except that he has not been a practicing lawyer. I explained this to Mr. J. he concurred with me that I ought not to recommend anyone from N.C.
Engaged with Gen’l Toombs yesterday in examining, at the request of the President, the Indian treaties, made by Albert Pike, with the various Indian tribes on our Western frontier. They are very important. Those with the tribes (some civilized) and residing in what is usually called the Indian Territory, provide for their sending a delegate to Congress and their final admission as a State into the Union. This was not deemed advisable & will probably be changed by Congress.
In the course of conversation the President spoke with much concern of the state of things likely to exist next spring when the terms of many 12 m’s  Volunteer Regiments expire. Many of them (he named several from his own State) would, he feared, refuse to remain in the service. He attributed bad feeling among the Volunteers, in a great measure, to want of management and knowledge of such troops on the part of our officers in command. He spoke of Gen’l Bragg as the only General in command of an Army who had shewn himself equal to the management of Volunteers and at the same time commanded their love and respect.
We were invited to his house to dinner at 6 P.M. – I could not decline – Toombs promised to go but was absent, excusing himself as sick. Mr. Kenner of La. & Wm. Porcher Miles, So. Ca. were the only other gentlemen present, save a couple of young men, one of who was the President’s Private Secretary. The ladies present, I believe, were staying in the family. Mrs. Davis’ health does not admit her seeing company.
Nothing remarkable about the dinner, it was plain and unpretending. After dinner the President invited Mr. K. Mr. M. & myself to his “own room” – a sort of “sunggery” where were books, papers &c – Gave us cigars and we sat an hour or more in conversation. Among other things- he again spoke of the 12 m. Volunteers and the danger we would be in next spring. He spoke of their discontent, the mismanagement &c, and again repeated what he had said to Toombs about Gen’l B. Mr. K. it seems had a letter from the Gen’l to the same purpose, said he had taken it to Mr. Benjamin who had framed a bill to be laid before Congress on the subject. I doubt whether it will have the desired effect. It is a very serious matter.

Mr. Kenner told me that Braxton’s wife is his cousin. He is a very sensible man. He seemed afraid Slidell would not survive a winters confinement at the North.