1 January 1862: “we may expect an attack soon on Roanoke Island and other points near us…already several negroes have left here or near here…”

Posted on 1 Jan ’12 by Biff Hollingsworth

Image description: Letter to William S. Pettigrew from S. H. McRae, 1 January 1862, about the potential for attacks on Roanoke Island by Union forces, and seeking Pettigrew’s influence to secure more Confederate troops as a precaution in case of an attack. 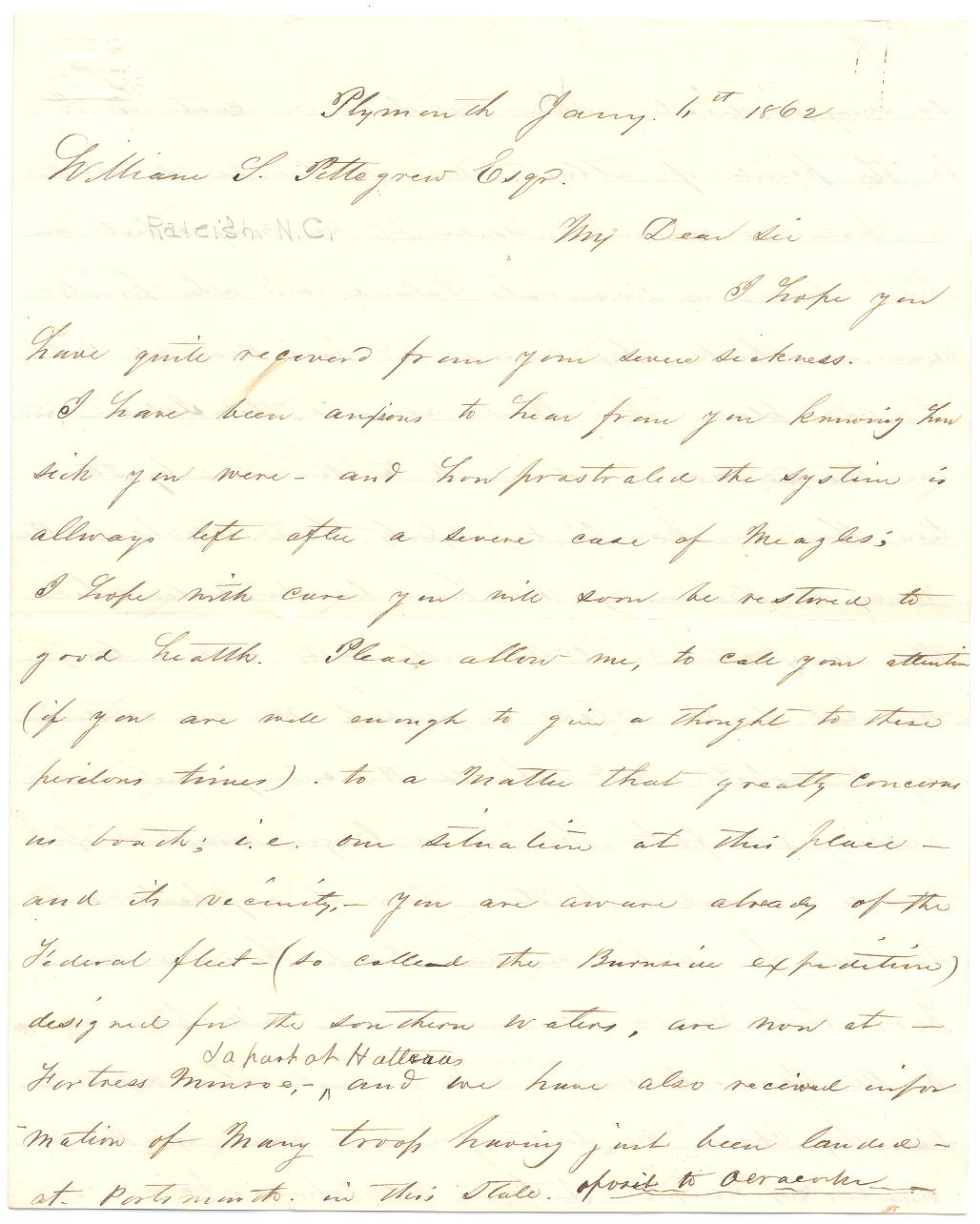 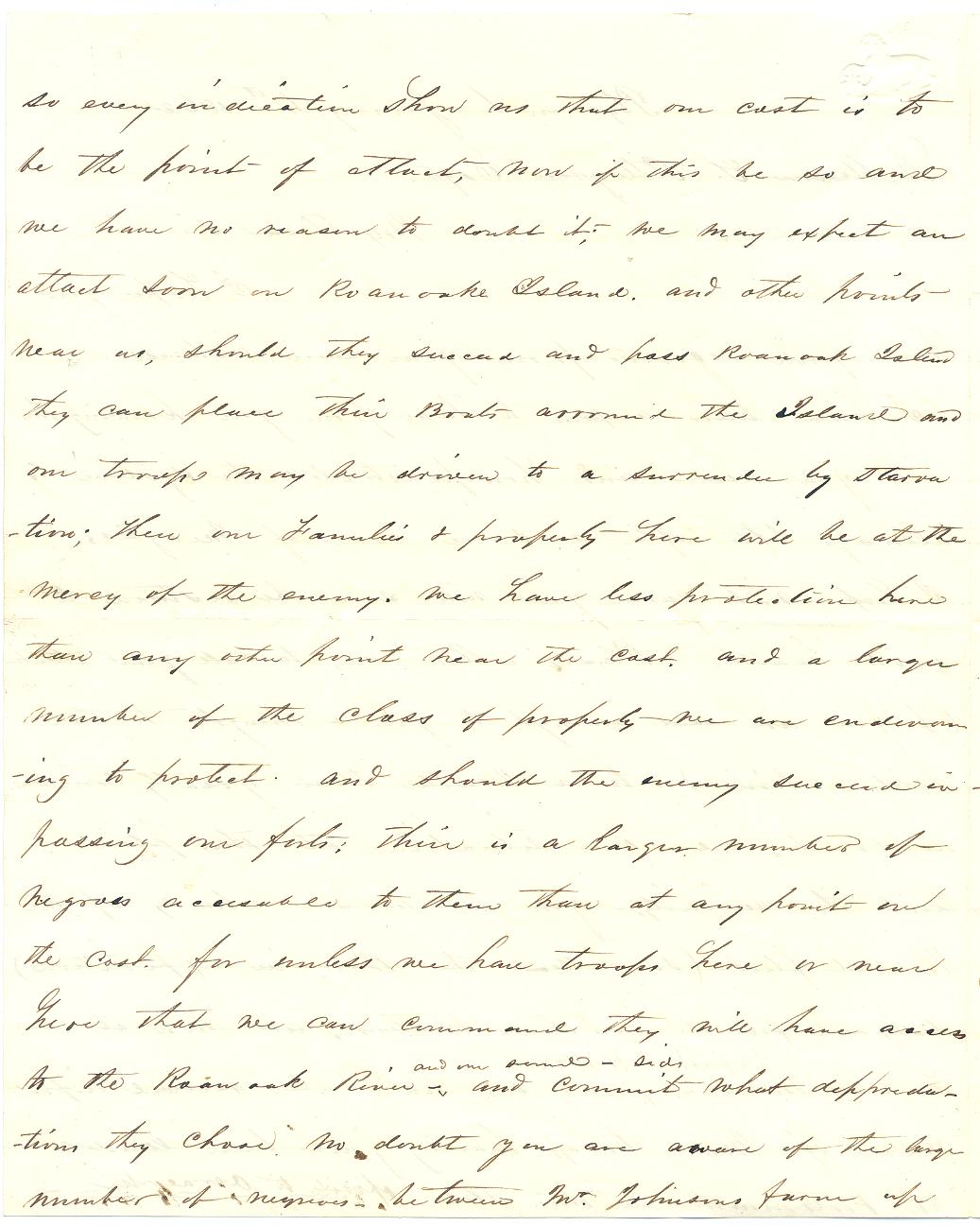 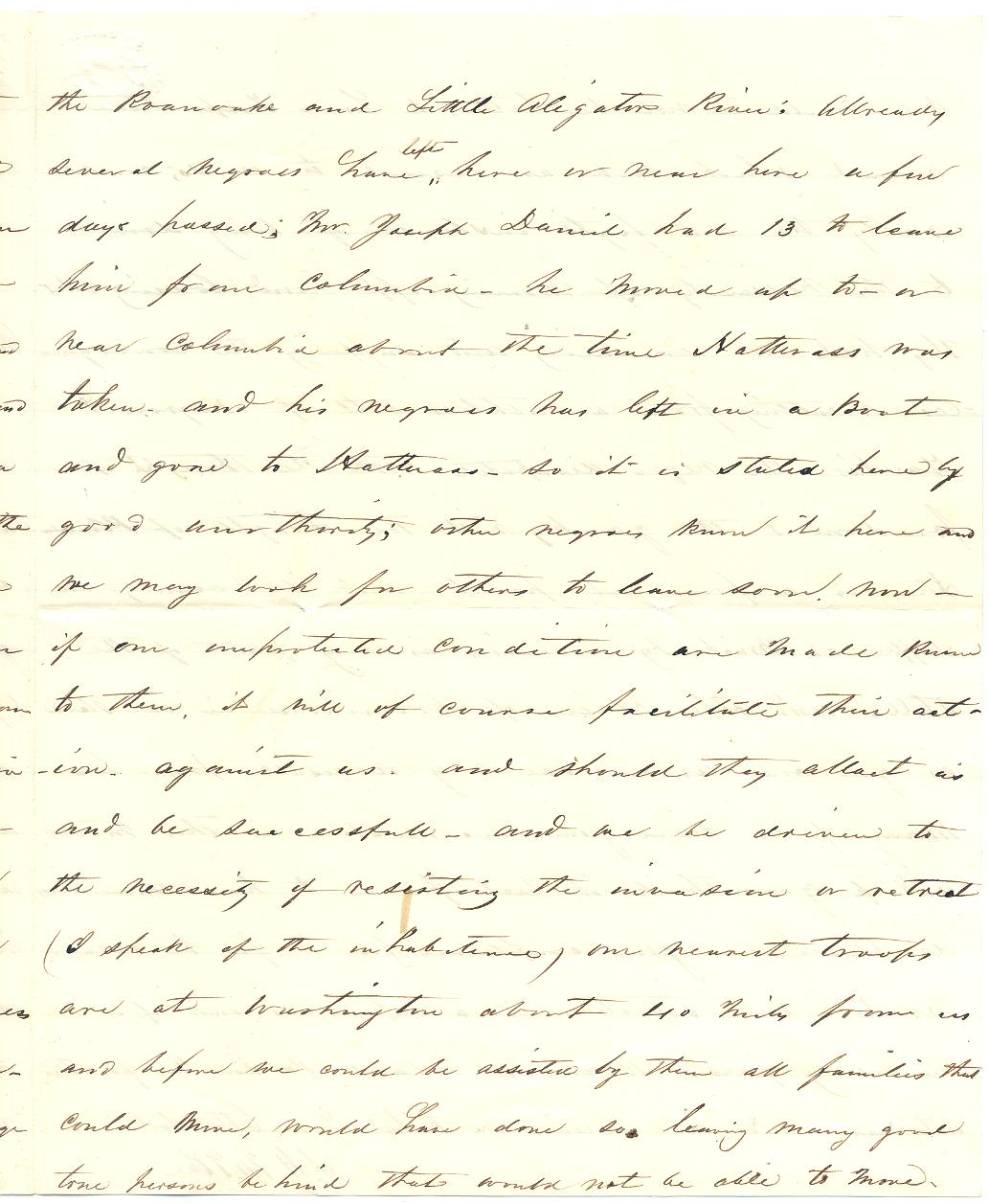 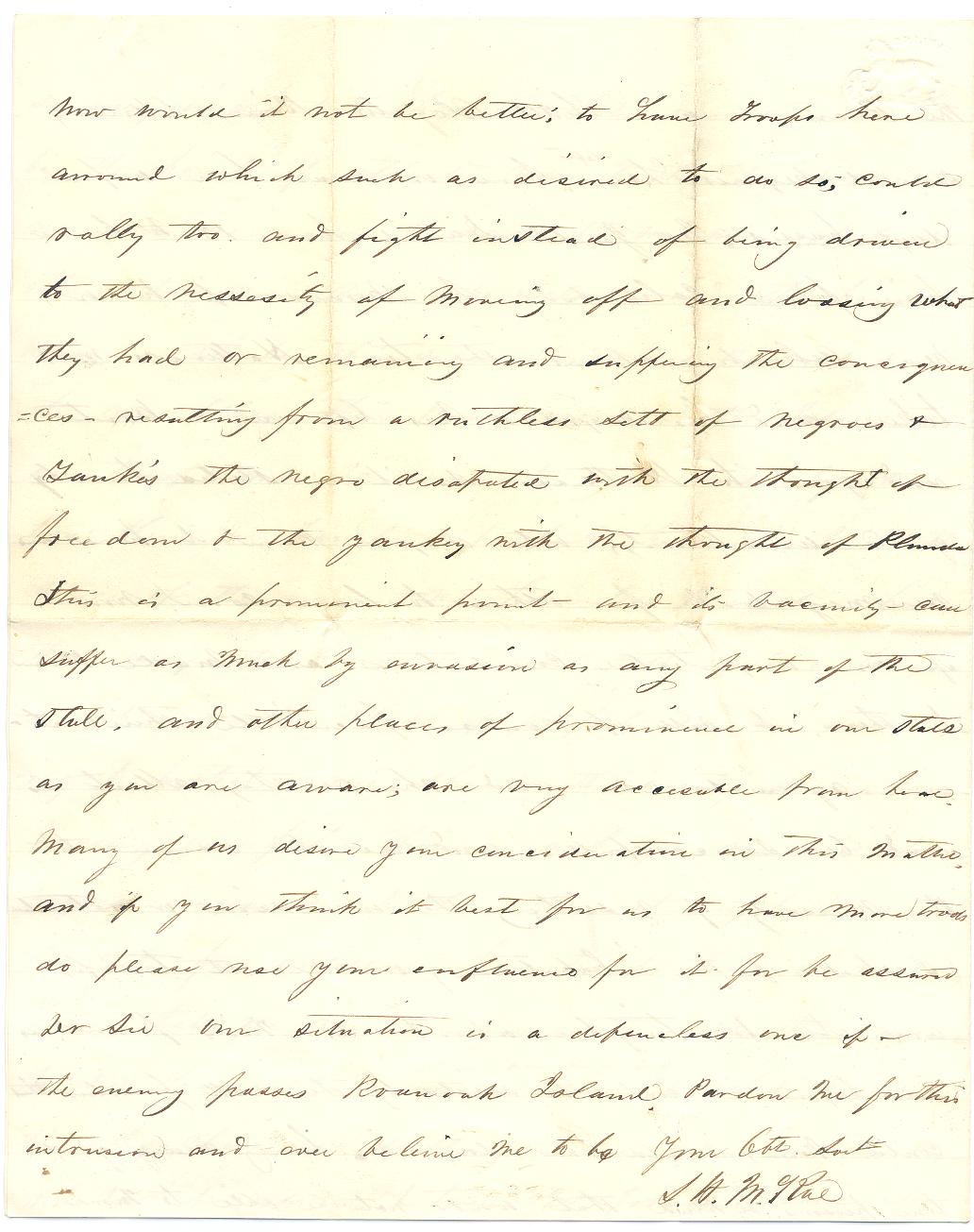 I hope you have quite recovered from your severe sickness. I have been anxious to hear from you knowing how sick you were – and how prostrated the system is always left after a severe case of the measles; I hope with cure you will soon be restored to good health. Please allow me, to call your attention (if you are well enough to give a thought to these perilous times) to a matter that greatly concerns us both; i.e. our situation at this place – and its vicinity – you are aware already of the Federal Fleet (so called the Burnside expedition) designed for the southern waters, are now at Fortress Monroe, a port of Hatteras, and we have also received information of many troops having just been landed at Portsmouth in this state, opposite to Ocracoke

So every indication show us that our coast is to be the point of attack, now if this is to be so and we have no reason to doubt it, we may expect an attack soon on Roanoke Island and other points near us, should they succeed and pass Roanoke Island they can place their boats around the Island and our troops may be driven to surrender by starvation; there our families & property – here will be at the mercy of the enemy. we have less protection here than any other point near the coast and a larger number of the class of property we are endeavoring to protect. and should the enemy succeed in passing our forts; their is a larger number of Negroes accesable to them at any point on the coast. For unless we have troops  here or near here that we can command they will have access to the  Roanok River and on all sides and commit what depredation they choose. No doubt you are aware of the large number of negroes between  Wm Johnsons farm up the Roanoke and Little Alligators River: Already several negroes have left here or near here a few days passed; Mr. Joseph Daniel had 13 to leave him from Columbia. He moved up to or near Columbia about the time Hatteras was taken and his negroes has left in a boat and gone to Hatteras. So it is stated here by good authority; other negroes know it here and may look for others to leave soon. Now if our unprotected conditions are made known to them, it will of course facilitate their action against us. and should they attack and be successful_ and we be driven to the necessity of resisting the invasion or retreat (I speak of the inhabitants) our nearest troops are at Washington about 40 miles from us and before we could be assisted by them all families that could move, would have done so, leaving many good lone persons behind that would not be able to move.

Now would it not be better; to have troops here around which such as desired to do so, could rally too and fight instead of being driven to the necessity of moving off and loosing what they had or remaining and suffering the consequences resulting from a ruthless set of negroes & Yankee’s  [.] the negro disapated with the thought of freedom & the Yankee with the thought of plunder. This is a prominent point  – and its vacinity can suffer as much by invasion as any part of the state. and other places of prominence in our state as you are aware; are very accessible from here. Many of us desire your consideration in this matter. and if you think it best for us to have more troops please do use your influence for it for be assured.

Dear sir our situation is a defenseless one if the enemy passes Roanoke Island. Pardon me for this intrusion and ever believe me to be Your Obt Servt