6 January 1862: “Smuggling was spoken [of] and Mr. Memminger said the Gov’t winked at it because of our necessities…”

Posted on 6 Jan ’12 by Biff Hollingsworth

Item description: Entry, 6 January 1862, from the diary of Thomas Bragg (Attorney General of the Confederate States of America, 1861-1863), written in Richmond, Va. 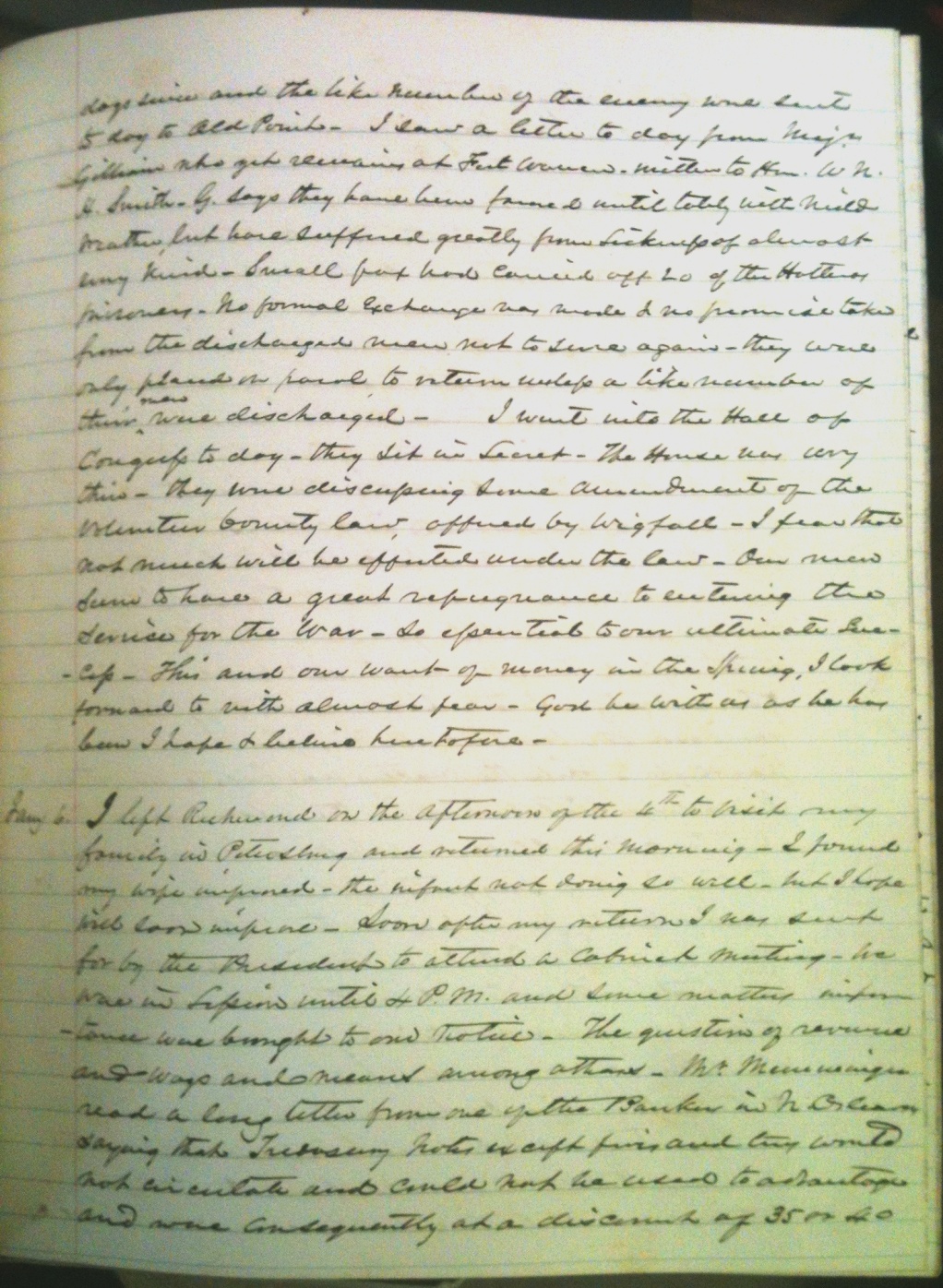 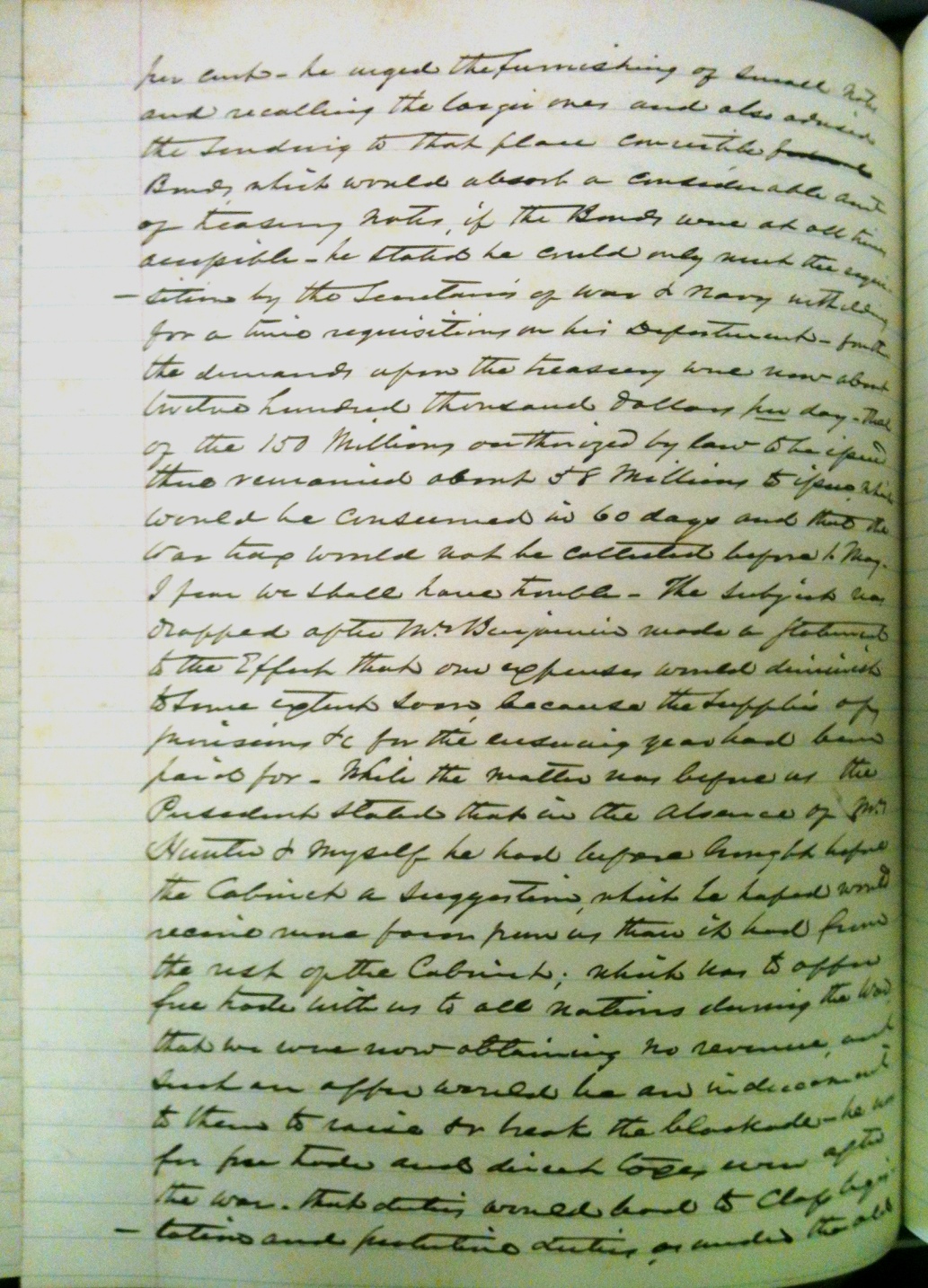 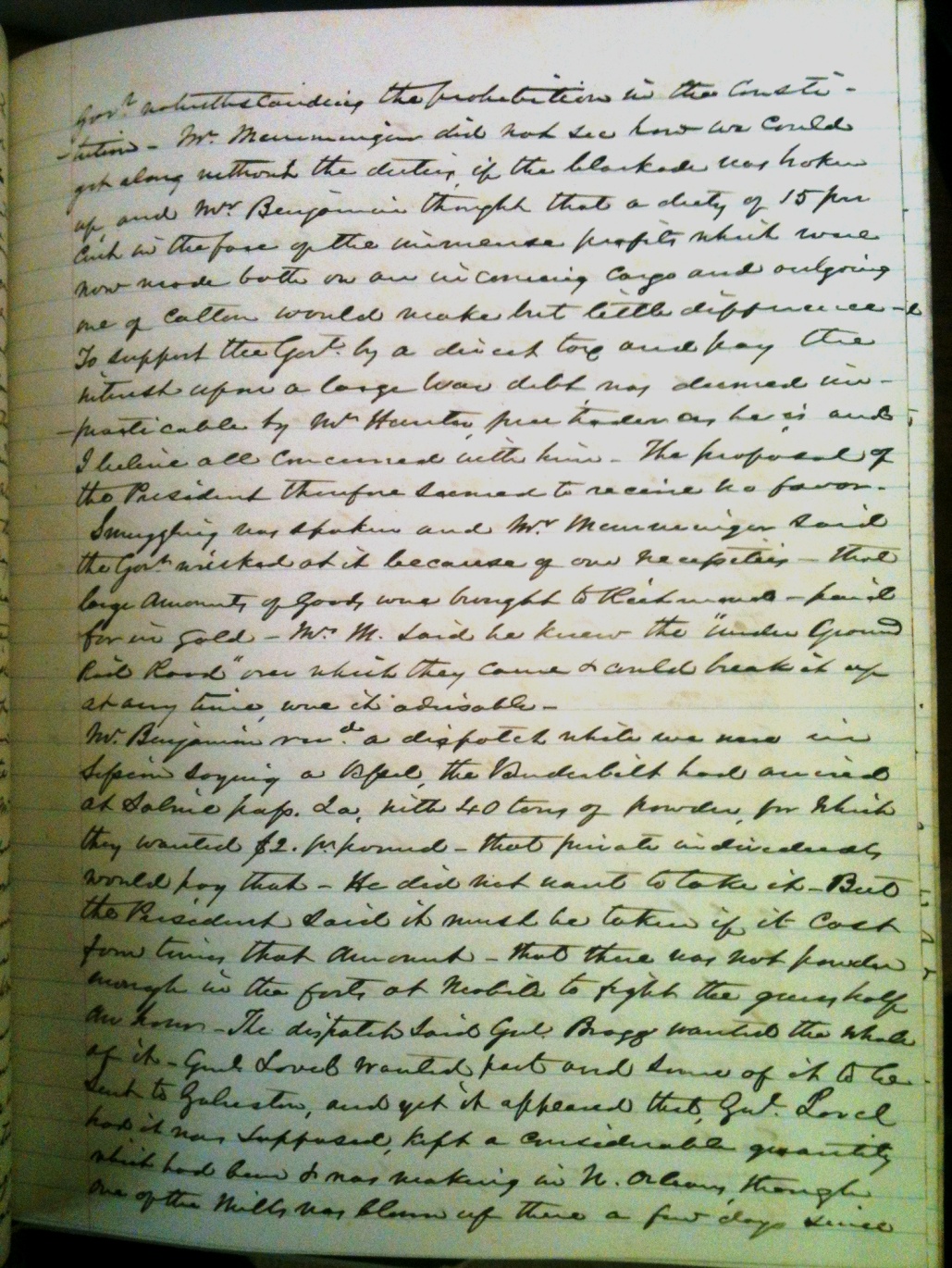 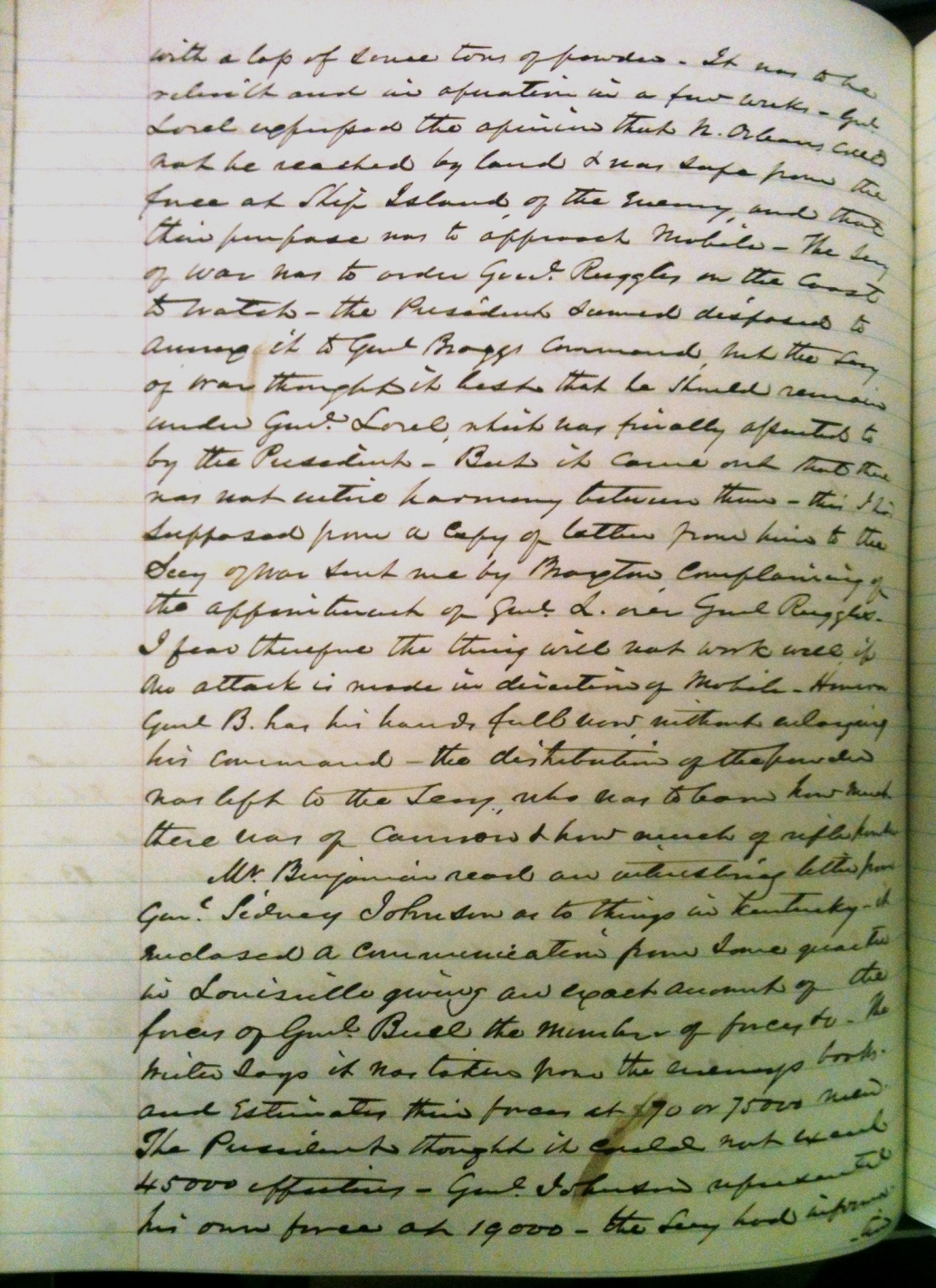 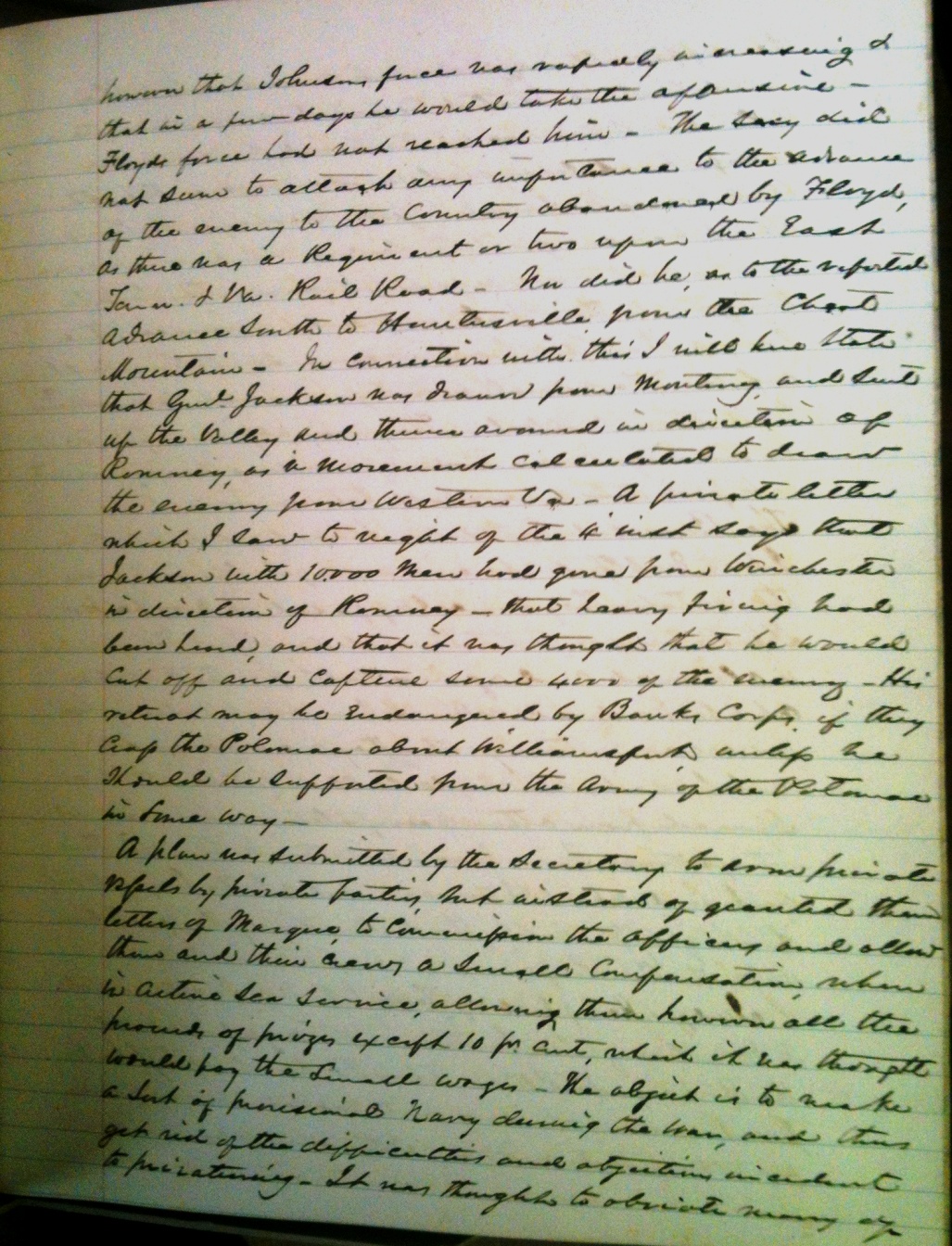 I left Richmond on the afternoon of the 4th to visit my family in Petersburg and returned this morning. I found my wife improved – the infant not doing so well – but I hope will soon improve. Soon after my return I was sent for by the President to attend a Cabinet meeting – We were in session until 4 P.M. and some matters [of] importance were brought to our notice. The question of revenue and ways and means among others. Mr. Memminger read  a long letter from one of the Bankers in N. Orleans saying that Treasury Notes except fives and tens would not circulate and could not be used to advantage, and were consequently at a discount of 35 or 40 per cent, he urged the furnishing of small notes and recalling the larger ones and also advised the sending to that place convertible Bonds, which would absorb a considerable amount of treasury notes, if the Bonds were at all times accessible – he stated he could only meet the requisition by the Secretaries of War and Navy withholding for a time requisitions on his Department – from these the demands upon the treasury were now about twelve hundred thousand dollars per day – that of the 150 Millions authorized by lat to be issued there remained about 58 Millions to issue, which would be consumed in 60 days and that the War tax would not be collected before 1 may. I fear we shall have trouble. The subject was dropped after Mr. Benjamin made a statement to the effect that our expenses would diminish to some extent soon, because the supplies of provisions &c for the ensuing year had been paid for. While the matter was before us the President stated that in the absence of Mr. Hunter and myself he had before brought before the Cabinet a suggestion which he hoped would receive more favor from us than it had form the rest of the Cabinet; which was to offer free trade with us to all nations during the war, that we were now obtaining no revenue, and such an offer would be an inducement to them to raise or break the blockade – he was for free trade and direct taxes even after the war, that duties would lead to Class legislation and protective duties, as under the old Gov’t notwithstanding the prohibition in the Constitution. Mr. Memminger did not see how we could get along without the duties, if the blockade was broken up, and Mr. Benjamin thought that a duty of 15 per cent in the face of the immense profits which were now made both on an incoming cargo and outgoing one of the cotton would make but little difference. To support the Gov’t by a direct tax and pay the interest upon a large war debt was deemed impracticable by Mr. Hunter, free trade as he is, and I believe all concurred with him. The proposal of the President therefore seemed to receive no favor.

Smuggling was spoken [of] and Mr. Memminger said the Gov’t winked at it because of our necessities – that large amounts of goods were brought to Richmond – paid for in gold. Mr. M. Said he knew the “under ground Rail Road” over which they came & could break it up at any time, were it advisable.

Mr. Benjamin rec’d a dispatch while we were in Session saying a vessel, the Vanderbilt, had arrived at Saline Pass, La. with 40 tons of powder, for which they wanted $2. pr. pound – that private individuals would pay that. He did not want to take it, bu the President said it must be taken if it cost four times that amount – that there was not powder enough in the forts at Mobile to fight the guns half an hour. The dispatch said Gen’l Bragg wanted the whole of it – Gen’l Lovel wanted part and some of it to be sent to Galveston, and yet it appeared that Gen’l Lovel had, it was supposed, kept a considerable quantity which had been & was making in N. Orleans, though one of the Mills had blown up there a few days since, with a loss of some tons of powder. It was to be rebuilt and in operation in a few weeks. Gen’l Lovel expressed the opinion that N. Orleans could not be reached by land & was safe from the force at Ship Island of the enemy, and that their purpose was to approach Mobile. The Sec’y of War was to order Gen’l Ruggles on the coast to watch – the President seemed disposed to annex it to Gen’l Bragg’s command, but the Sec’y of War thought it best that he should remain under Gen’l Lovel, which was finally assented to by the President. But it came out that there was not entire harmony between them – this I had supposed from a copy of a letter from him to the Sec’y of war sent me by Braxton, complaining of the appointment of Gen’l L. over Gen’l Ruggles. I fear therefore the thing will not work well if an attack is made in the direction of Mobile. However Gen’l B. has his hands full now, without enlarging his command – the distribution of the powder was left to the Sec’y, who was to learn how much there was of cannon & how much of rifle powder.

Mr. Benjamin read an interesting letter from Gen’l Sidney Johnson as to the things in Kentucky – it enclosed a communication from some quarter in Louisville giving an exact account of the fores of Gen’l Buel the number of forces &c. The writer says it was taken from the enemy’s books, and estimates their forces 70 or 75,000 men. The President thought it could not exceed 45,000 effectives – Gen’l Johnson represented his own force at 19,000 – the Sec’y had information however that Johnson’s force was rapidly increasing & that in a few days he would take the offensive – Floyd’s force had not reached him. The Sec’y did not seem to attach any importance to the advance of the enemy to the country abandoned by Floyd, as there was a Regiment or two upon the East Tenn. & Va. Rail Road. Nor did he as the reported advance South to Huntersville from the Cheat Mountain. In connection with this I will here state that Gen’l Jackson was drawn from Monterey, and sent up the valley and thence around in direction of Romney, calculated to draw the enemy from Western Va. A private letter which I saw tonight of the 4 inst.says that Jackson with 10,000 men had gone from Winchester in the direction of Romney – that heavy firing had been heard, and that it was thought that he would cut off and capture some 4000 of the enemy. His retreat may be endangered by the Banks’ Corps if they cross the Potomac about Williamsport, unless he should be supported from the Army of the Potomac in some way –

A plan was submitted by the Secretary to arm private vessels by private parties, but instead of, granted them letters of Marque, to commission the officers and allow them and their crews a small compensation when in active sea service, allowing them however all the proceeds of prizes except 10 pr. cent, which it was thought would pay the small wages. The object is to make a sort of provisional Navy during the War, and thus get rid of the difficulties and objections incident to privateering. It  was thought to obviate many of the difficulties incident to privateering – they could not be treated as privates any more than volunteers serving in the land forces who equip themselves, and moreover it is thought that being national vessels, European Nations which have argued to discountenance privateering and have refused to permit them to take prizes into their ports or to enter and remain there longer than 24 hours or some short time, could refuse the usual privileges in such cases allowed to National Vessels. They may possibly regard it as an ingenious mode of avoiding their agreements as to privateers – We shall see however –

The Burnside Expedition has not yet sailed – It is doubtful where it will go. Our Gov’t is on the watch – they have supposed it may be for the Potomac or the Peninsula. Gen’l Magruder isalarmed and again calls for the Malitia which is ordered out. I fear such orders do more harm than good – they are unarmed, and besides hundreds called out can’t be spared from other occupations, and hence dissatisfaction. From some information I obtained this week and which I communicated to the Sec’y of War it is highly probable the destination of the Expedition is North Carolina.

Judge Hemphill of Texas, late U.S. Senator, and a member of the Provisional Congress, died at the Exchange Hotel on the 4th instant of typhoid pneumonia, which is quite prevalent here. He was a very fine and very estimable man.