9 January 1862: “…should your defences at Roanoke Island prove as ineffectual as ours at Port Royal, it will be dreadful indeed…”

Posted on 9 Jan ’12 by Biff Hollingsworth 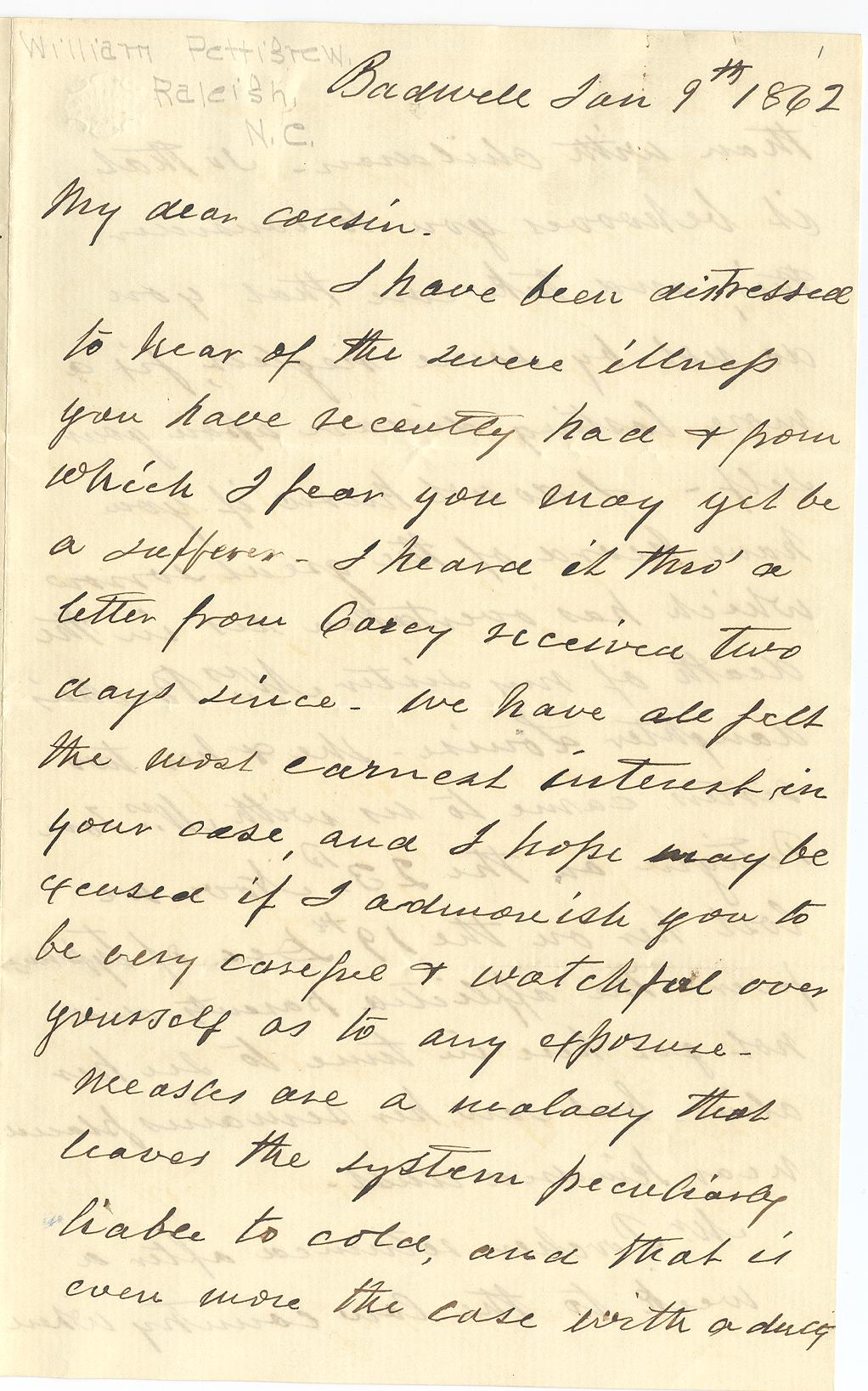 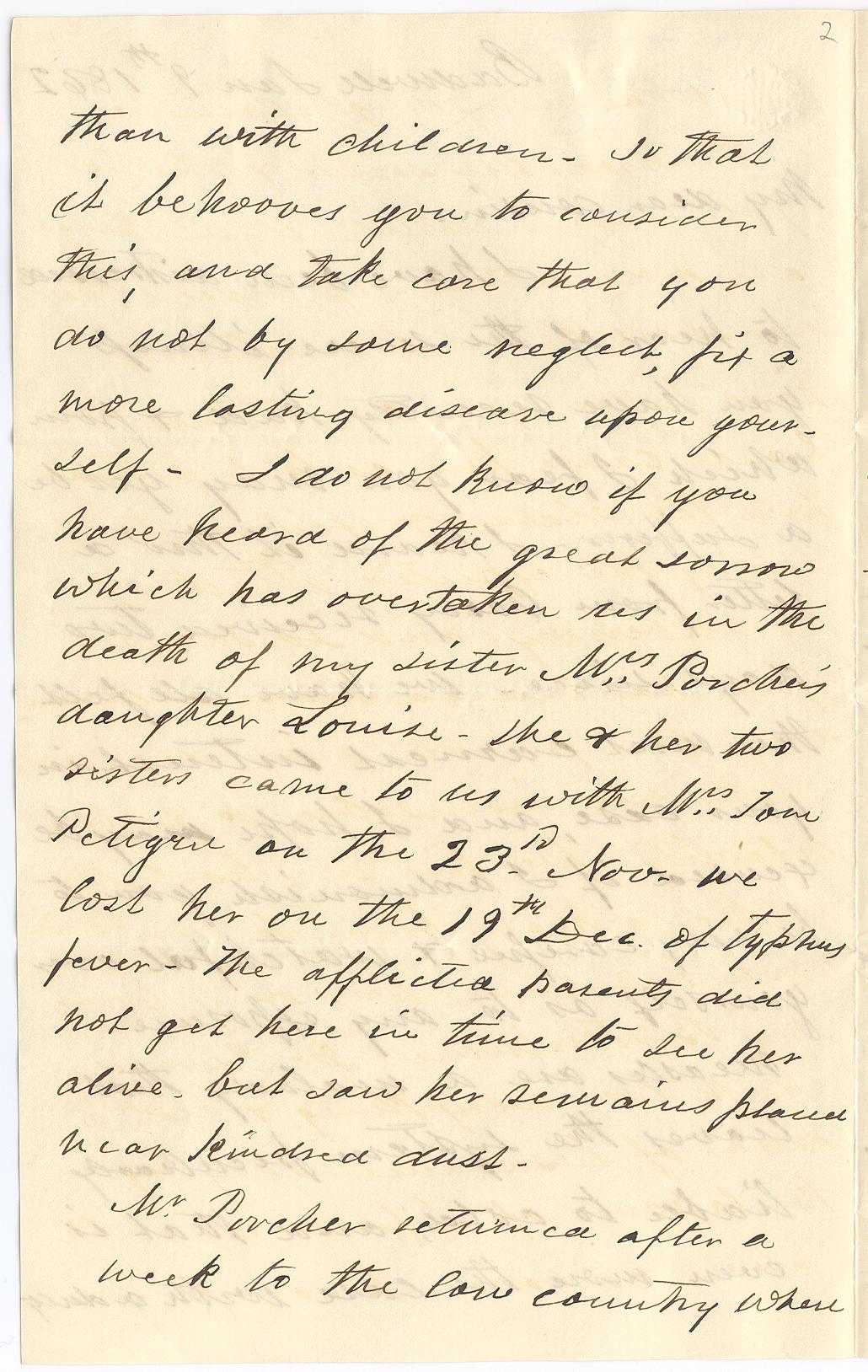 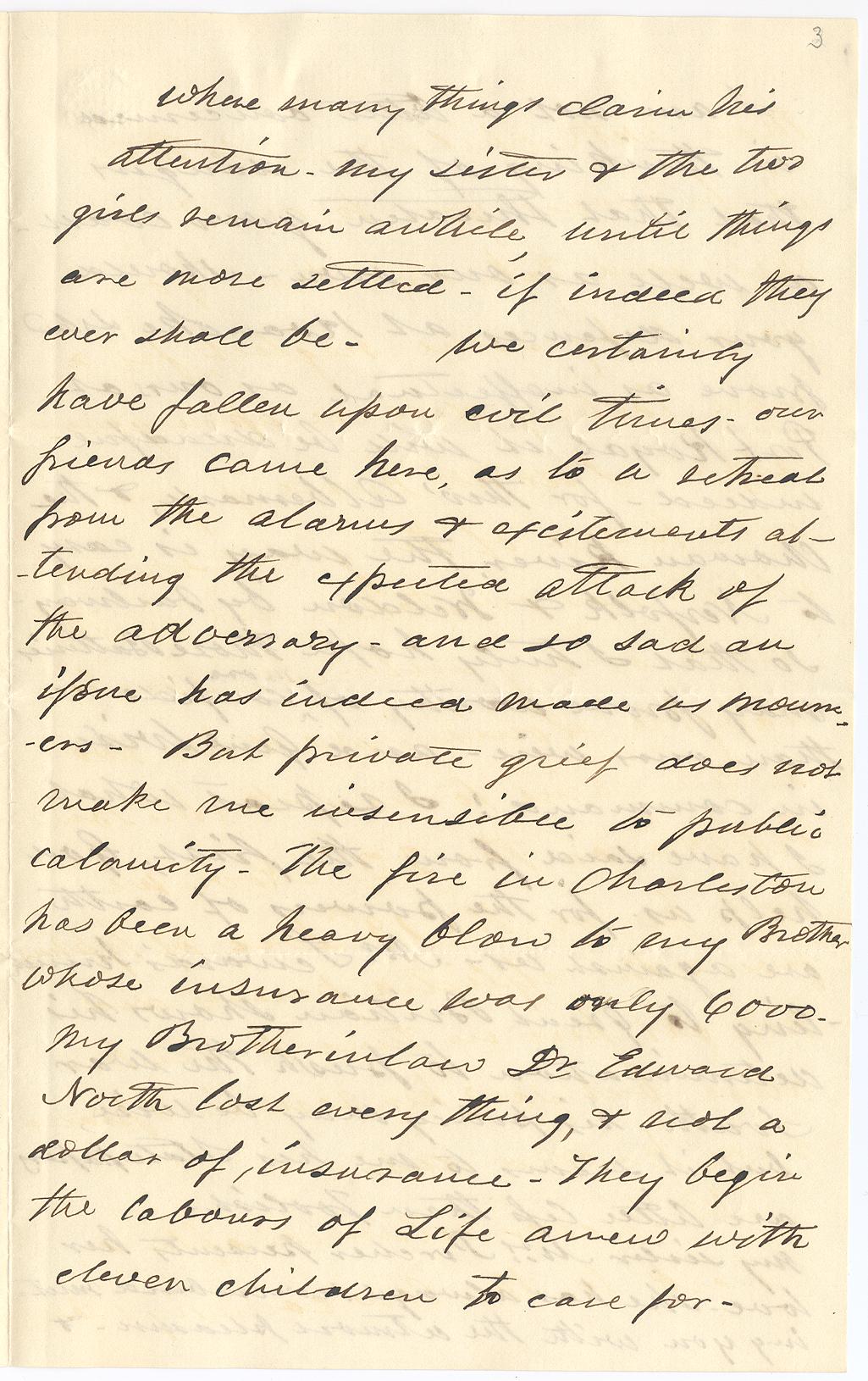 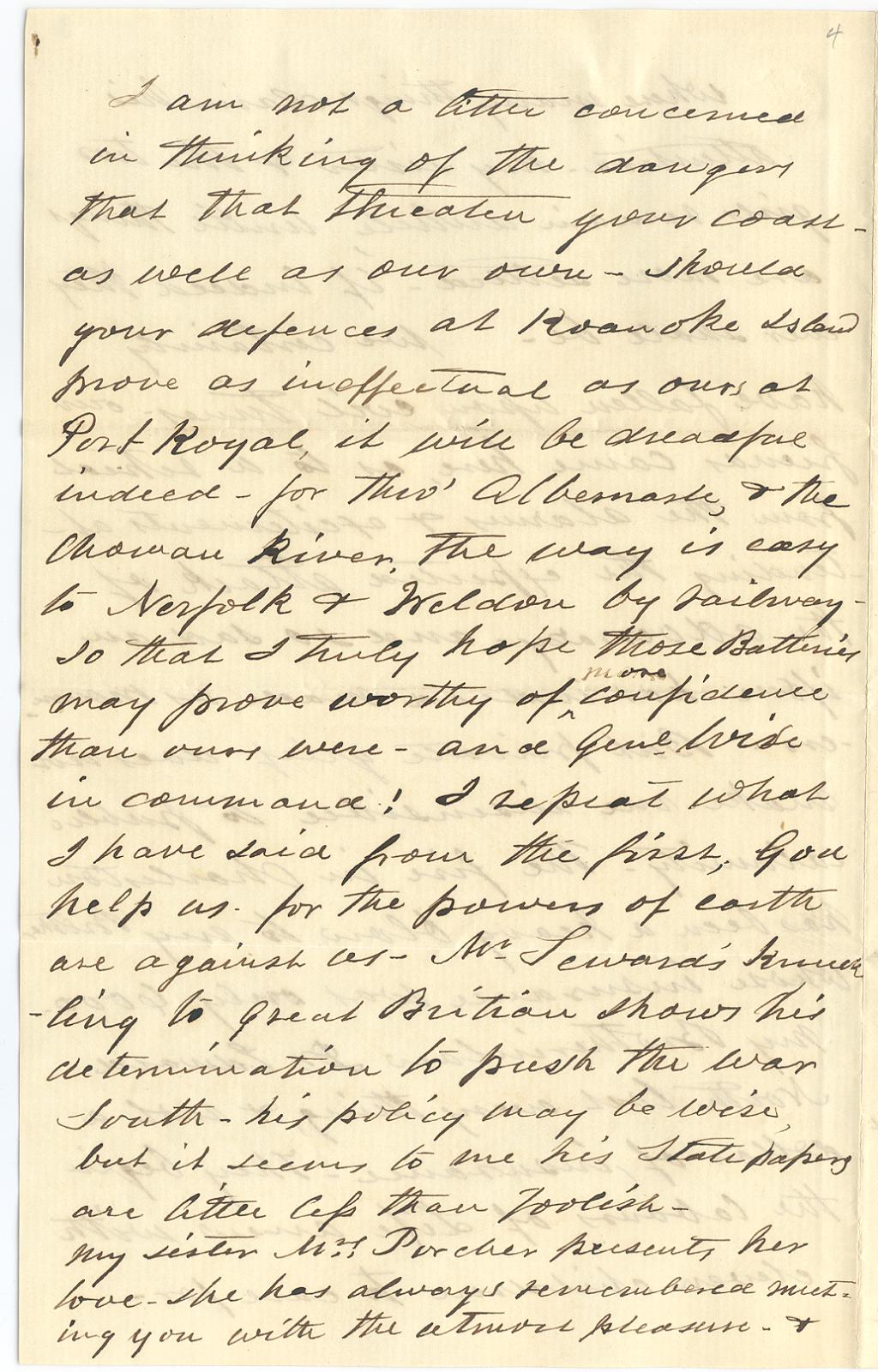 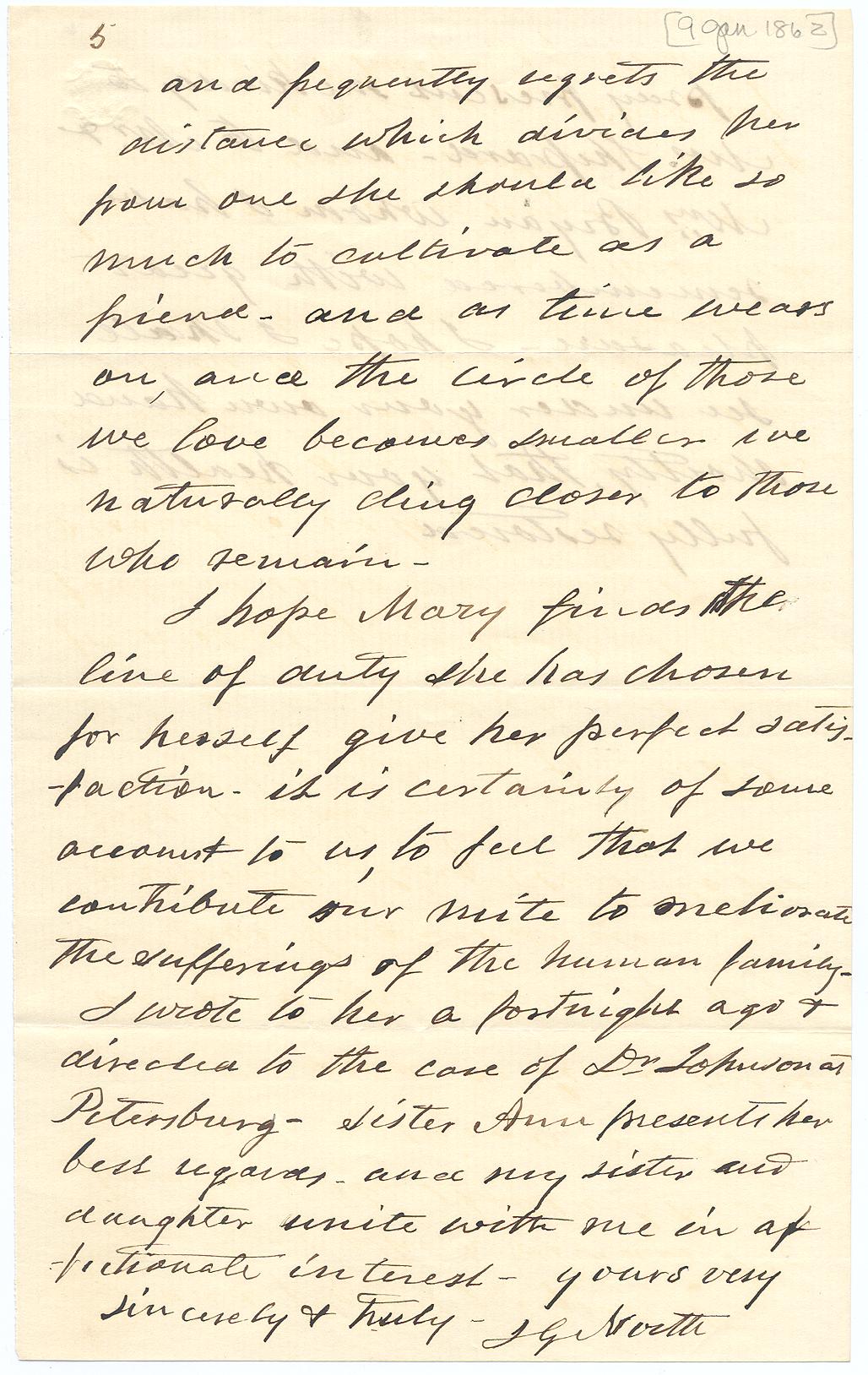 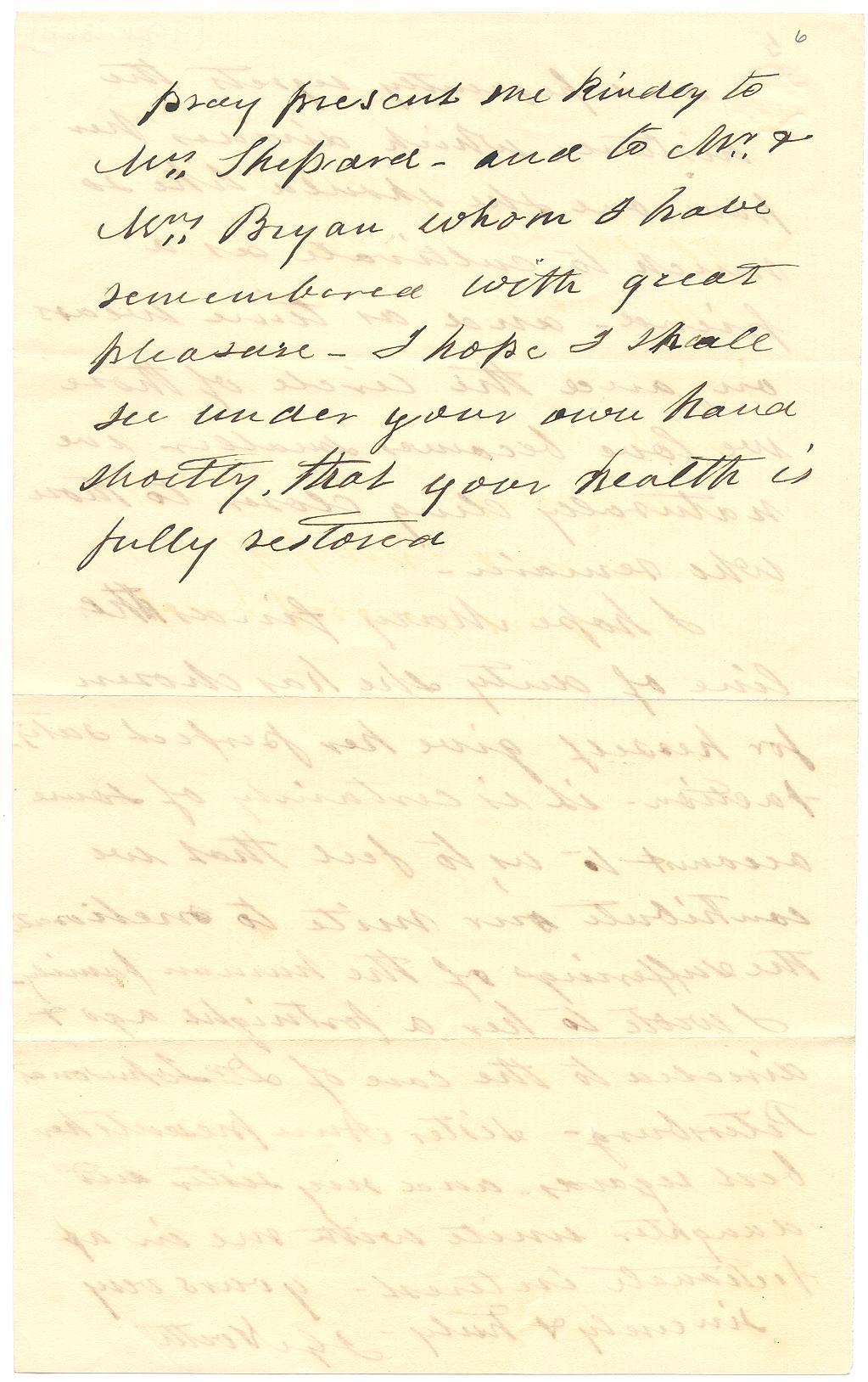 I have been distressed to hear of the severe illness you have recently had & from which I fear you may yet be a sufferer. I heard it thro’ a letter from Carey received two days since – we have all felt the most concerned interest in your case, and I hope may be excused if I admonish you to be very careful & watchful over yourself as to any exposure.

Measles are a malady that leaves the system peculiarly liable to cold, and that is even more the case with adults than with children. So that it behooves you to consider this, and take care that you do not by some neglect, fix a more lasting disease upon yourself. I do not know if you have heard of the great sorrow which has overtaken us in the death of my sister, Mr. Porcher’s daughter Louise. She & her two sisters came to us with Mrs Jane Petigru on the 23rd Nov. We lost her on the 19th Dec. of typhus fever. The afflicted parents did not get here in time to see her alive, but saw her remains placed near Kindred dust.

Mr. Porcher returned after a week to the low country where many things claimed his attention. my sister & the two girls remain awhile, until things are more settled – if indeed they ever shall be. we certainly have fallen upon evil times – our friends came here as to a retreat from the alarms & excitements attending the expected attack of the adversary. and so sad an an issue has indeed made us mourners. But private grief does not make me insensitive to public calamity. The fire in Charleston has been a heavy blow to my Brother whose insurance was only 6000.

Mr Brother in law Dr. Edward North lost everything, & not a dollar of insurance. They begin the labours of Life anew with eleven children to care for. I am not a little concerned in thinking of the dangers that that threaten your coast – as well as our own – should your defences at Roanoke Island prove as ineffectual as ours at Port Royal, it will be dreadful indeed – for thro’ Albermarle & the Chowan River, the way is easy to Norfolk & Weldon by railway – so that I truly hope those Batteries may proved worthy of more confidence than ours were – and Genl Wise in command! I repeat what I have said from the first, God help us. for the powers of earth are against us – Mr. Seward’s knuckling to Great Britain shows his determination to push the war South – his policy may be wise, but it seems to me his State papers are little bit less than foolish.

My sister Mrs Porcher presents her love – she has always remembered meeting you with the utmost pleasure and frequently regrets the distance which divides her from one she should like so much to cultivate as a friend – and as time wears on, and the circle of those we love becomes smaller we naturally cling closer to those who remain.

I hope Mary finds the line of duty she has chosen for herself giver her perfect satisfaction. it is certainly of some account to us, to feel that we contribute our mite to ameliorate the sufferings of the human family. I wrote to her a fortnight ago & directed to the case of Dr Johnson at Petersburg – Sister Ann presents her best regards and my sister and daughter unite with me in affectionate interest – Yours very sincerely & truly

Pray present me kindly to Mrs. Shepard – and to Mr and Mrs Bryan who I have remembered with great pleasure_ I hope I shall see under your own hand shortly that your health is fully restored