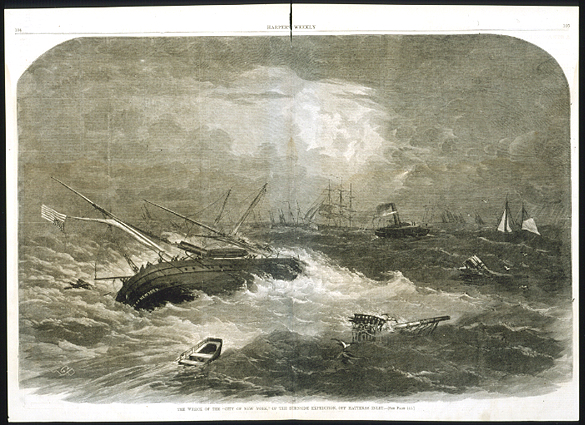 A powerful northeaster storm struck the mid-Atlantic coast between 12 and 15 January 1862.  The Burnside Expedition fleet confronted strong winds and warm weather as it rounded Cape Henry bound for Hatteras Inlet.  Ships thus sailed independently to Hatteras in face of the storm, and ships arrived at Hatteras at various times beginning 12 January.  The 600-ton screw steamer City of New York arrived outside Hatteras Inlet the morning of 12 January, but waited at sea for a persistent fog to clear.  The seas and winds grew rougher and stronger, and the steamer struck a shoal fifteen times trying to cross the bar.  On the sixteen attempt, the steamer grounded again, with waves overtaking the ship and wrecking two large deckboats.

Excerpt from accompanying article (NB. Harper’s Weekly mistakenly reported that the wrecked ship was the New York, which was also a ship in the fleet.):

THE BURNSIDE EXPEDITION AT HATTERAS.

We devote pages 101, 103, 104, and 105 to illus-
trations of the BURNSIDE EXPEDITION in the gale
off Hatteras, from sketches by our special corre-
spondent with the expedition. The general news-
paper dispatch said:

The expedition sailed from Hampton Roads on the 11th
and 12th of January, and consisted of over one hundred
and twenty-five vessels of all classes. They arrived at
Hatteras between the 12th and 17th instant, having been
greatly retarded by the storms and adverse winds which
prevailed during that time.

After their arrival at Hatteras they experienced a series
of storms of such severity that for two days in succession,
on more than one occasion, it was impossible to hold any
communication between any two vessels of the fleet.

After the first storm it was discovered that, instead of
vessels drawing eight and a half feet of water being able
to go over the swash, or bars, as General Burnside had
been informed, no vessel drawing over seven feet three
inches could pass into Pamlico Sound. No vessel either
could pass outside the bar drawing over thirteen feet of
water, unless very skillfully piloted, consequently the
steamer New York, on the 13th instant, struck on the out-
side of the bar. The New York was loaded with a cargo
valued at two hundred thousand dollars, consisting of
powder, rifles, and bombs, and proved a total loss. The
captain and crew, after bravely remaining in the rigging
for forty hours, were saved. The gun-boat Zouave dragged
her anchors, had a hole stove in her bottom, and sunk.
She is a total loss. Her crew and guns were saved. The
steamer Pocahontas went ashore on the 17th instant, near
the light-house, and became a total wreck. Ninety valu-
able horses belonging to the Rhode Island battery were on
board of her, and were nearly all drowned, including sev-
eral valued at five hundred dollars each. The Grapeshot,
in tow of the New Brunswick, parted her hawser and went
down. The crew were saved. An unknown schooner
loaded with oats, and another schooner, name unknown,
and six of her crew, were also lost on the beach. The
steamer Louisiana struck on the bar, where she still re-
mains. The report of her having been burned is entirely
incorrect. She may get off. The Eastern Queen and the
Voltigeur are also ashore. The latter will probably get
off.

The water vessels attached to the expedition had not
reached their destination when the Eastern State left; and
had it not been for the condensers on board some of the
vessels, and a vessel on shore, the most terrible sufferings
must have occurred among the troops. As it was the wa-
ter casks were composed of old whisky, camphene, and
kerosene oil casks.

The current was running at the rate of five miles an
hour, and the chop seas prevented General Burnside from
answering any signals of distress or communicating with
his generals. At one moment flags would appear with
Union down on a number of vessels, indicating want of
water, coal, and provisions, and then would be lost from
view.

This entry was posted in North Carolina Collection and tagged Burnside Expedition, City of New York, Hatteras. Bookmark the permalink.