14 January 1862: “If active operations are under taken in the spring, an Ammunition train of three times the present size (55 wagons) will be necessary…”

Posted on 14 Jan ’12 by Biff Hollingsworth

Item description: Letter, 14 January 1862, from Edward Porter Alexander to Gen. P.G.T. Beauregard. Alexander reports on “deficiencies and defects in the Engineer and Ordnance Departments” of the Army of the Potomac (CSA). 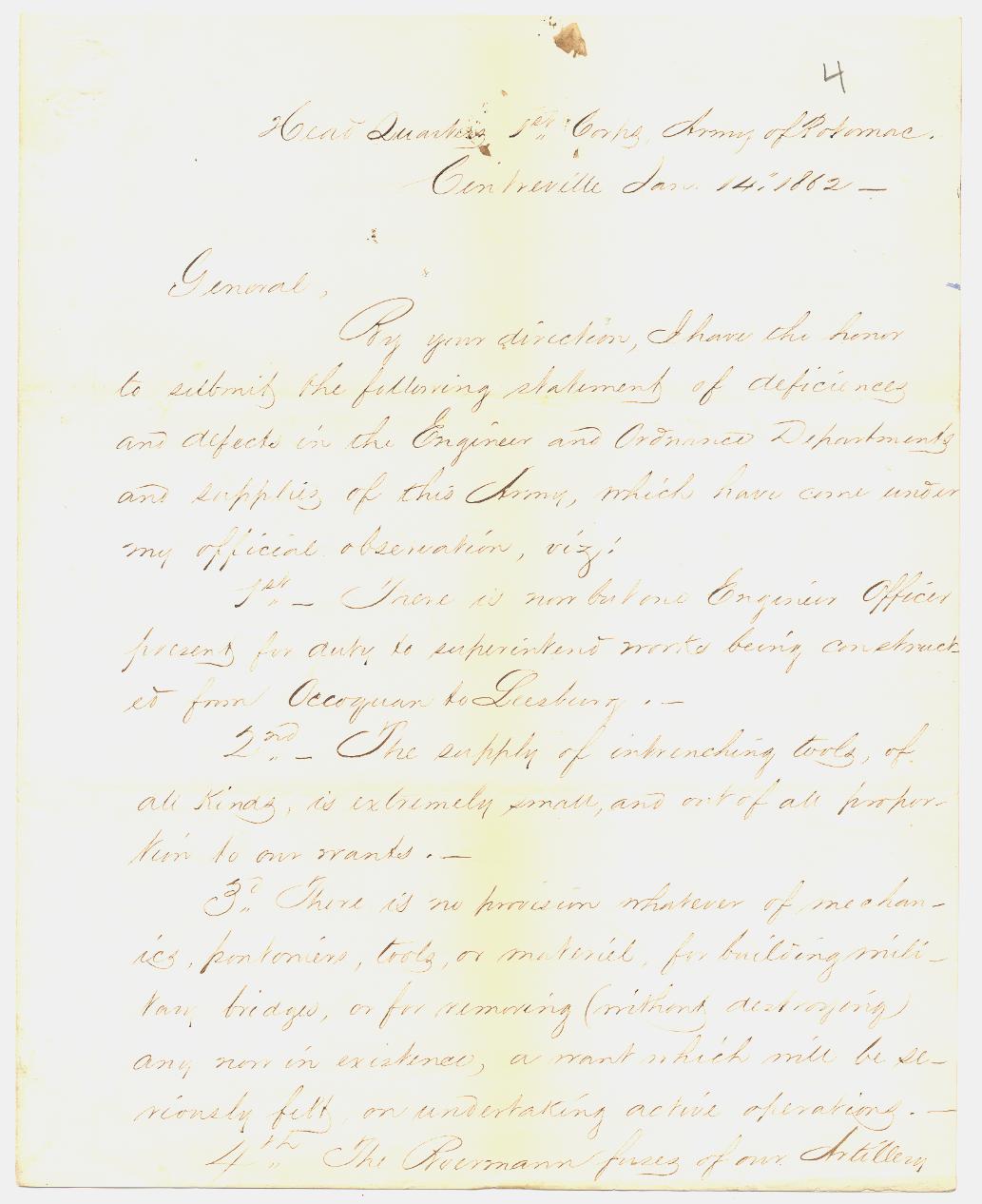 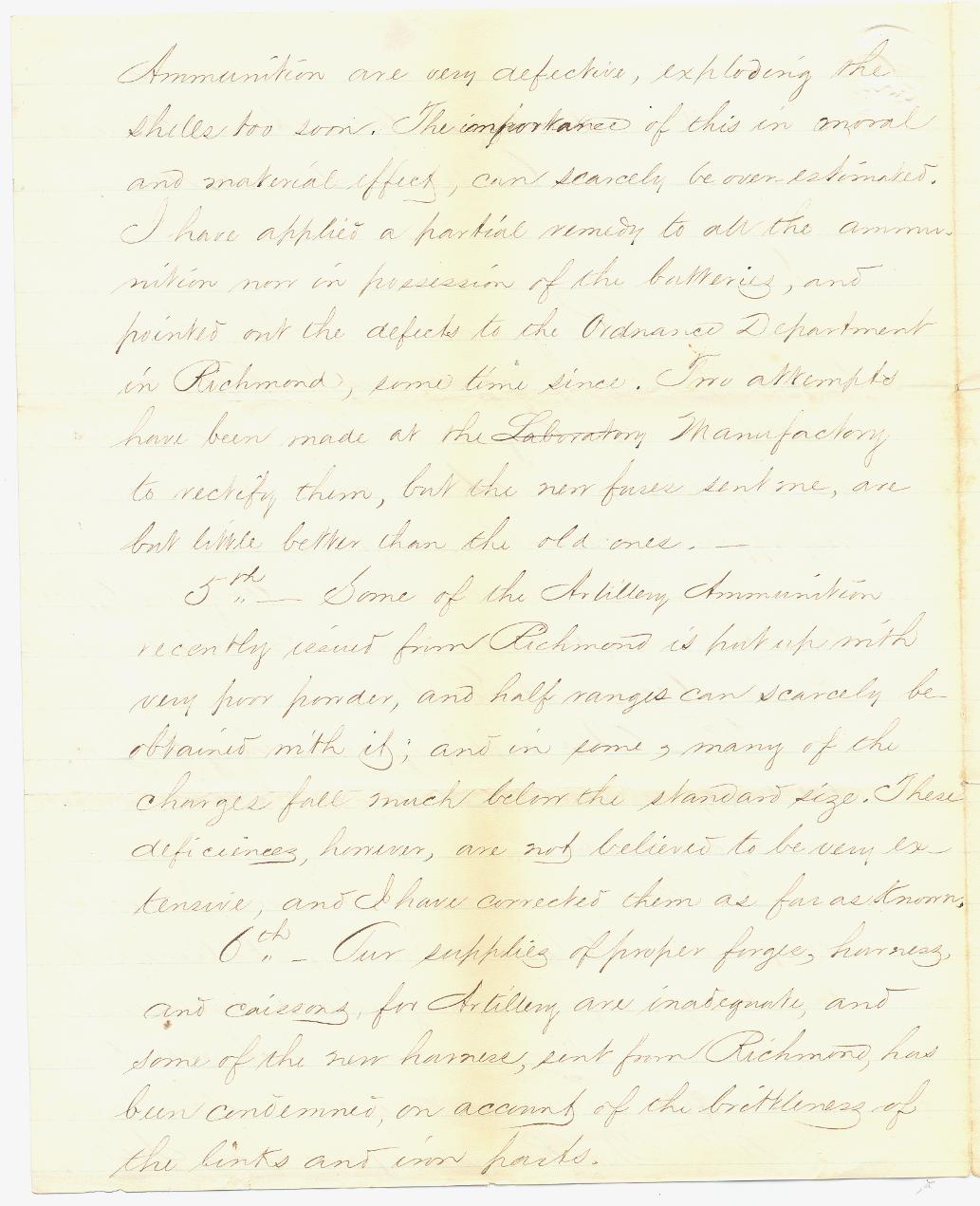 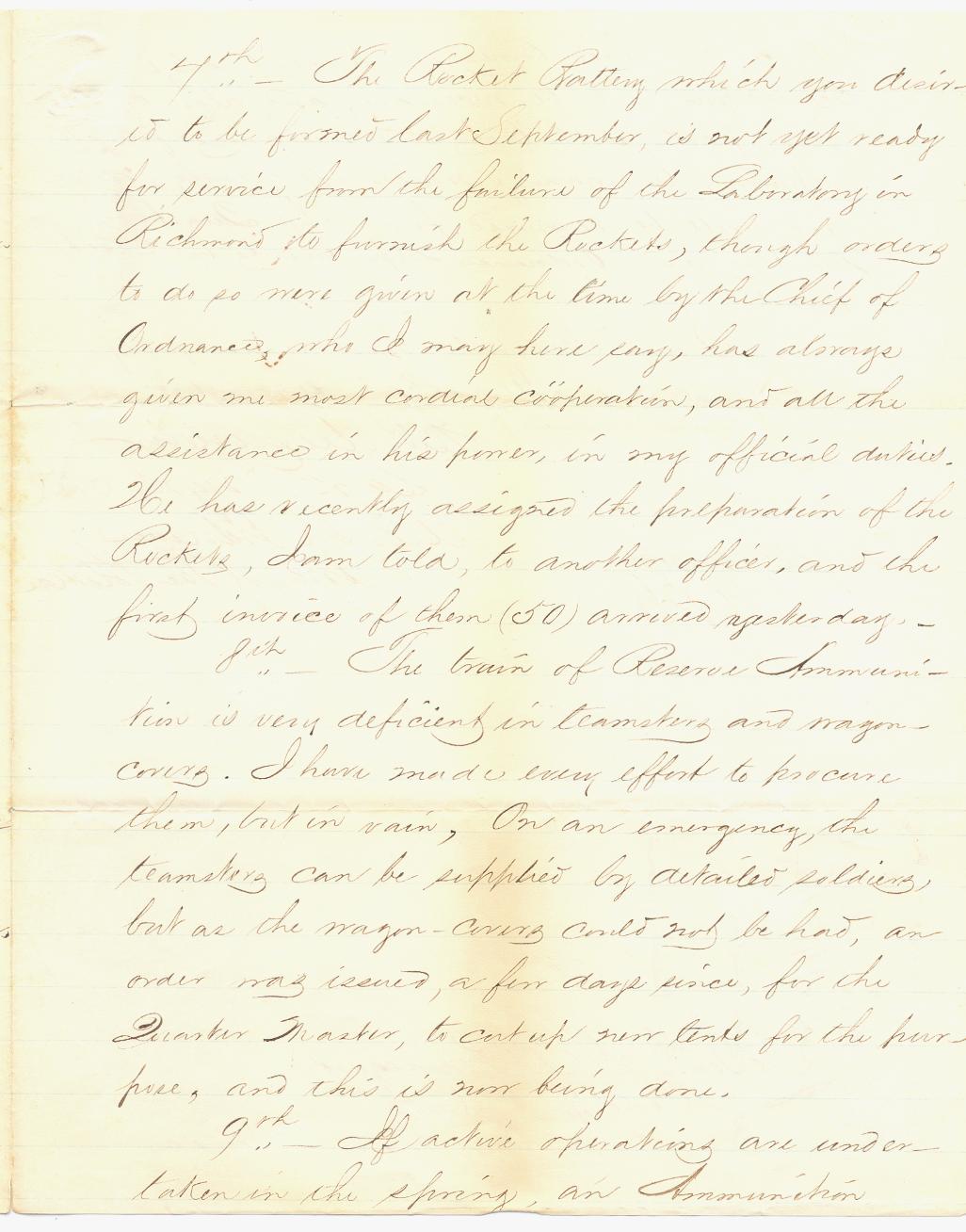 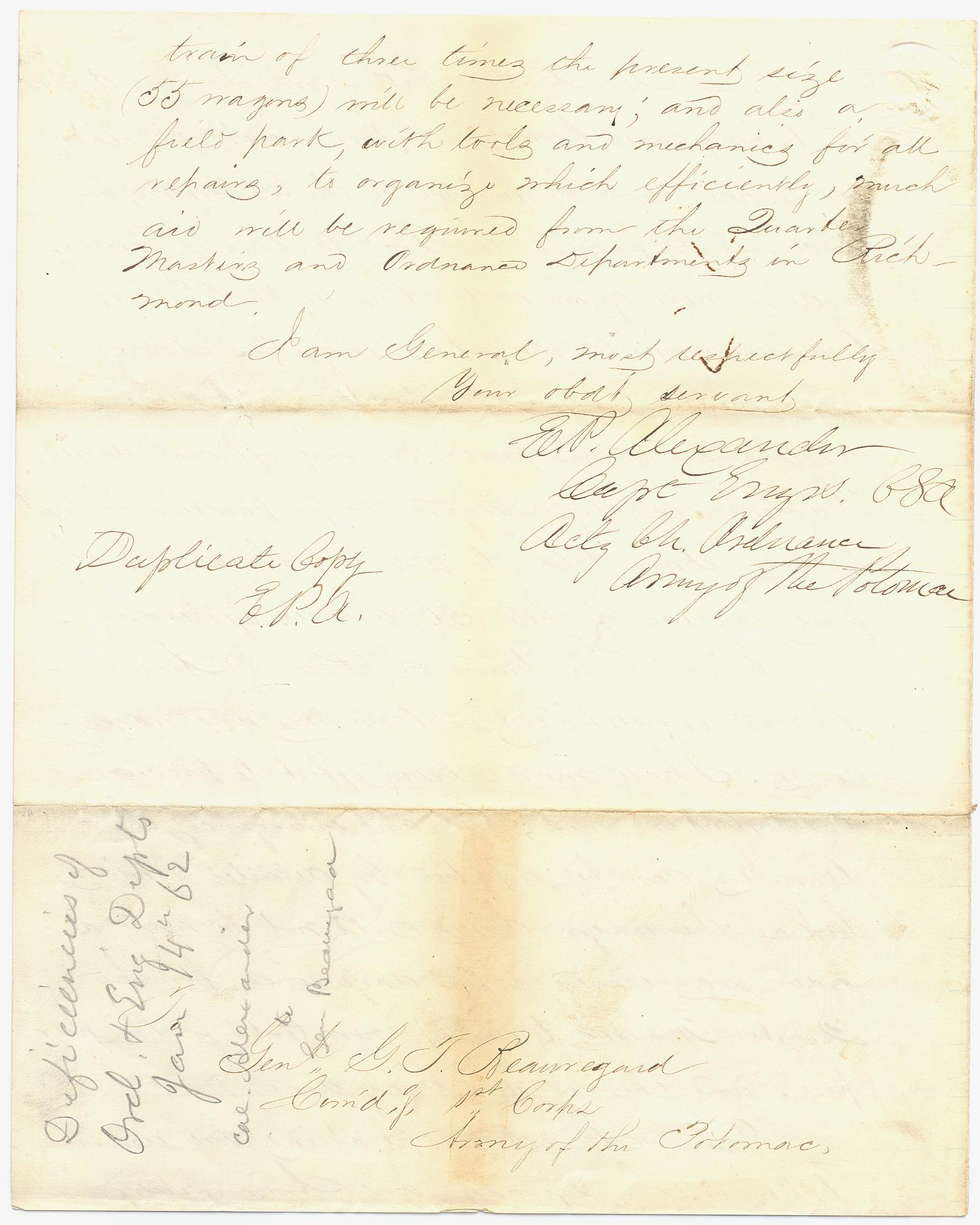 By your direction, I have the honor to submit the following statement of deficiencies and defects in the Engineer and Ordnance Departments and supplies of this Army, which have come under my official observation, viz.:

1st — There is now but one Engineer Officer present for duty to superintend works being constructed from Occoquan to Leesburg.

2nd — The supply of intrenching tools, of all kinds, is extremely small, and out of all proportion to our ranks.

3d — There is no provision whatever of mechanics, pontoniers, tools, or material, for building military bridges, or for removing (without destroying any now in existence, a want which will be seriously felt, on undertaking active operations.

4th — The Boermann [Bormann] fuses of our Artillery Ammunition are very defective, exploding the shells too soon. The importance of this in moral and material effects, can scarcely be over-estimated. I have applied a partial remedy to all the ammunition now in possession of the batteries, and pointed out the defects to the Ordnance Department in Richmond, some time since. Two attempts have been made at the Manufactory to rectify them, but the new fuses sent me are but little better than the old ones.

5th — Some of the Artillery Ammunition recently issued from Richmond is put up with very poor powder, and half ranges can scarcely be obtained with it; and in some or many of the charges fall much below the standard size. These deficiencies, however, are not believed to be very extensive, and I have corrected them as far as known.

6th – Our supplies of proper forges, harness, and caissons, for Artillery are inadequate, and some of the new harness, sent from Richmond, has been condemned, on account of the brittleness of the links and iron parts.

7th – The Rocket Battery which you desired to be formed last September is not yet ready for service from the failure of the Laboratory in Richmond to furnish the Rockets, though orders to do so were given at the time by the Chief of Ordnances, who I may here say, has always given me most cordial cooperation, and all the assistance in his power, in my official duties. He has recently assigned the preparation of the Rockets, I am told, to another officer, and the first invoice of them (50) arrived yesterday.

8th — The train of Reserve Ammunition is very deficient in teamsters and wagon covers. I have made every effort to procure them, but in vain, On an emergency, the teamsters can be supplied by detailed soldiers, but as the wagon-covers could not be had, an order was issued, a few days since, for the Quarter Master, to cut up new tents for the purpose, and this is now being done.

9th — If active operations are under taken in the spring, an Ammunition train of three times the present size (55 wagons) will be necessary; and also a field park, with tools, and mechanics for all repairs, to organize which efficiently, much aid will be required from the Quarter Masters and Ordnance Departments in Richmond.

I am General, most respectfully your obdt. servant,

To Genl. G.T. Beauregard
Comd. of 1st Corps
Army of the Potomac