27 January 1862: “We must know something more decided as to these marauders before any of us move.”

Posted on 27 Jan ’12 by Biff Hollingsworth

Item description: Letter, 27 January 1862, from Jane Caroline North Pettigrew to her brother, James Johnston Pettigrew. Caroline comments on the impending arrival of Burnside’s forces and the prevailing feeling of uncertainty among residents of coastal North Carolina. 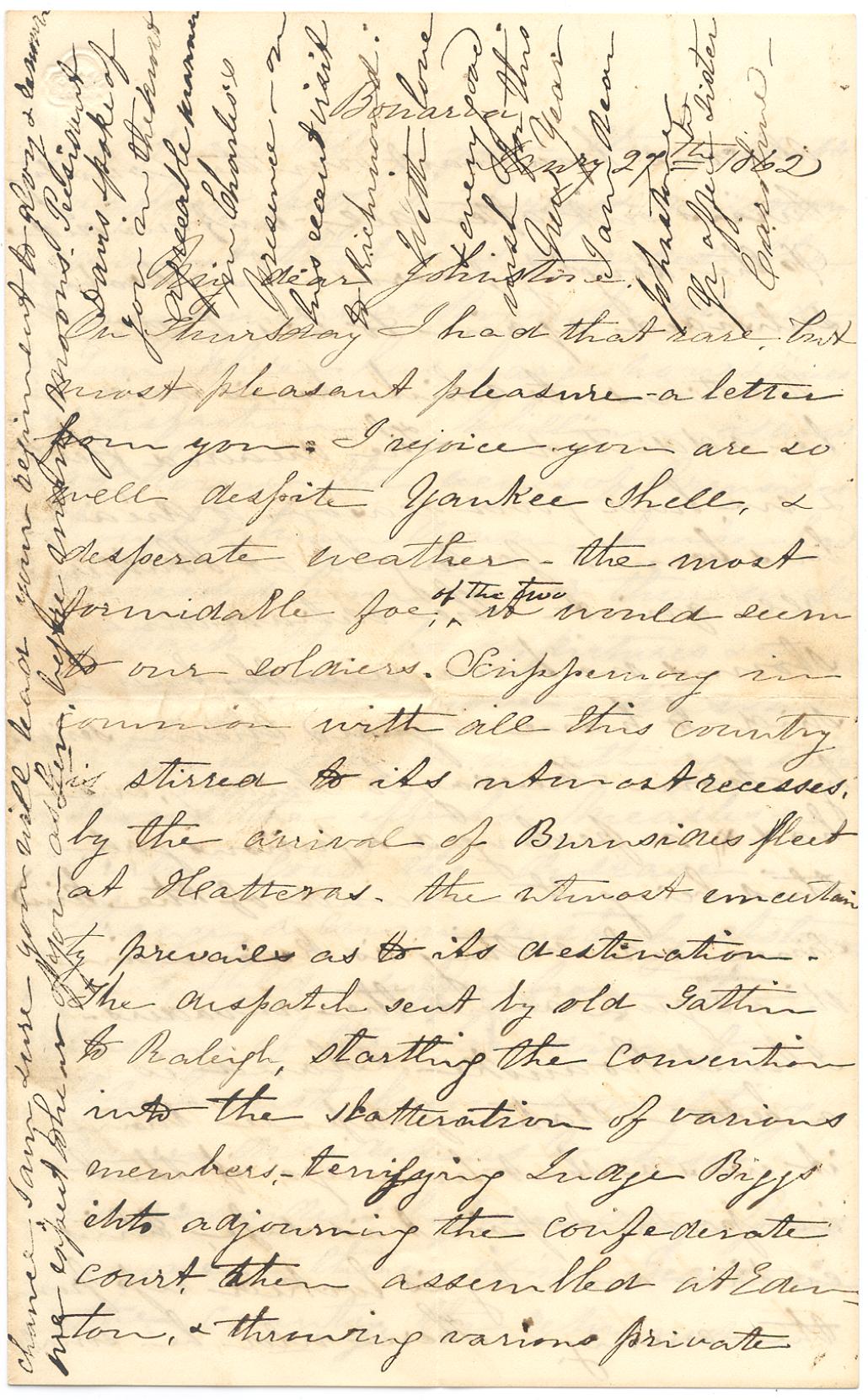 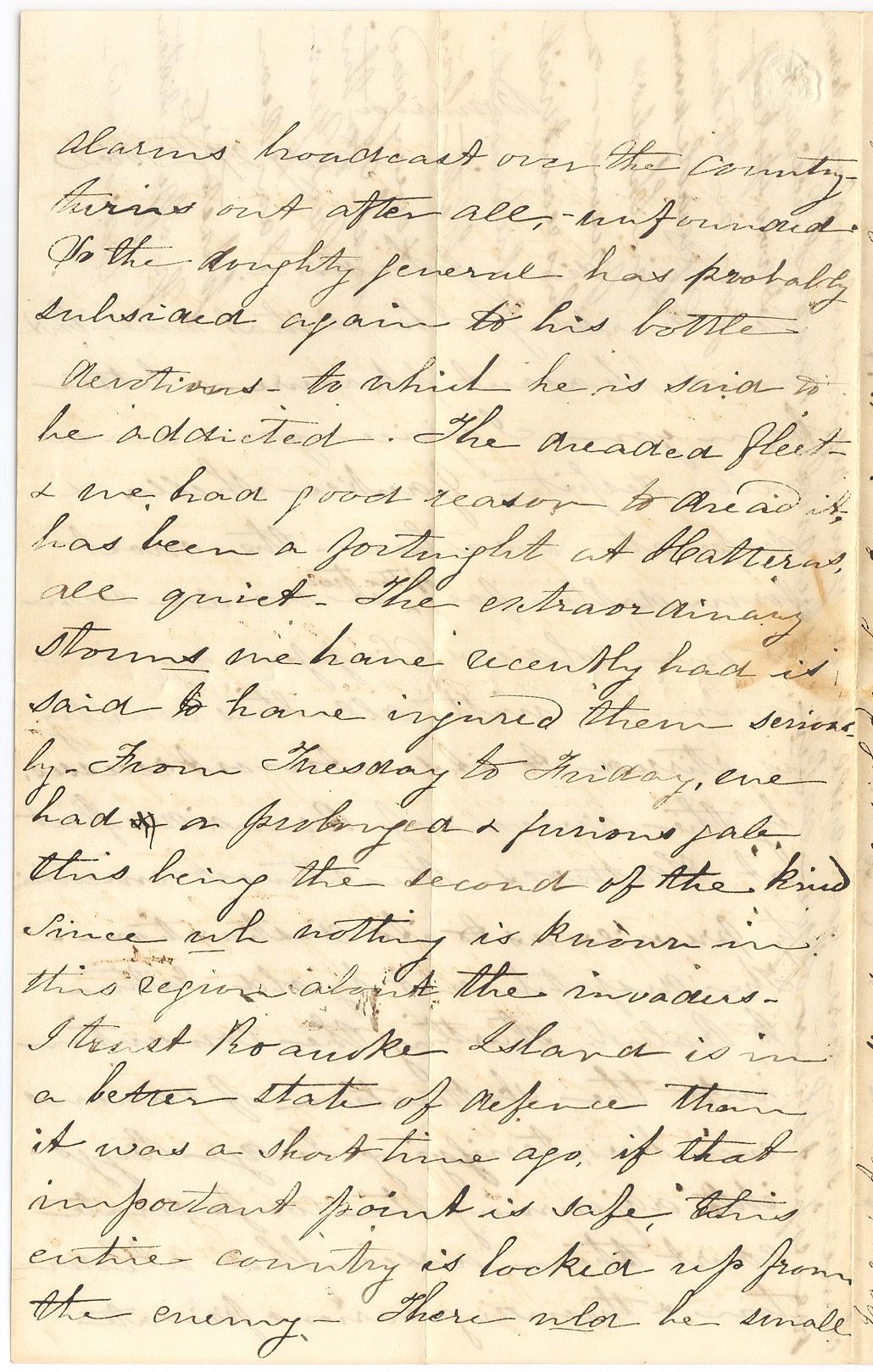 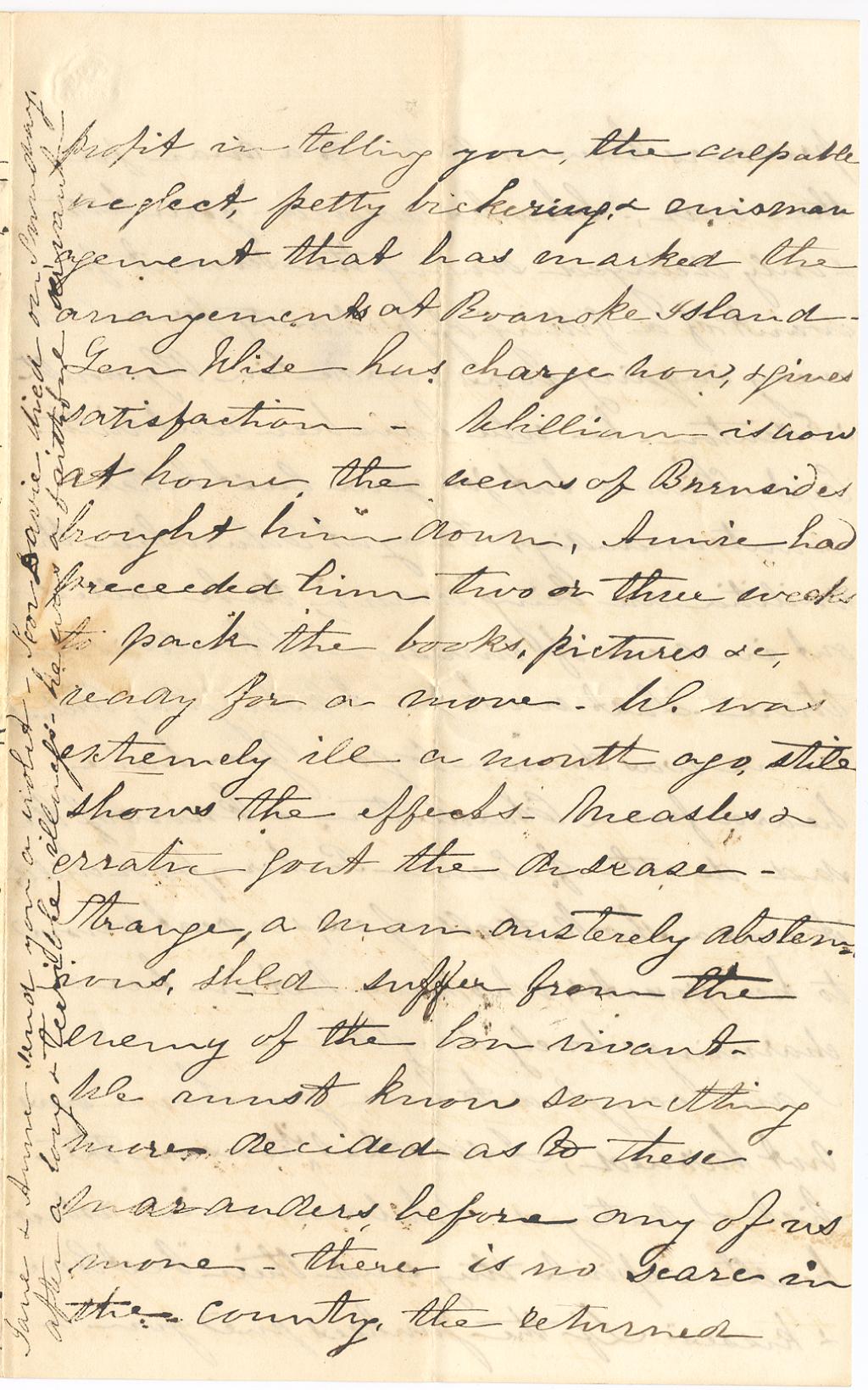 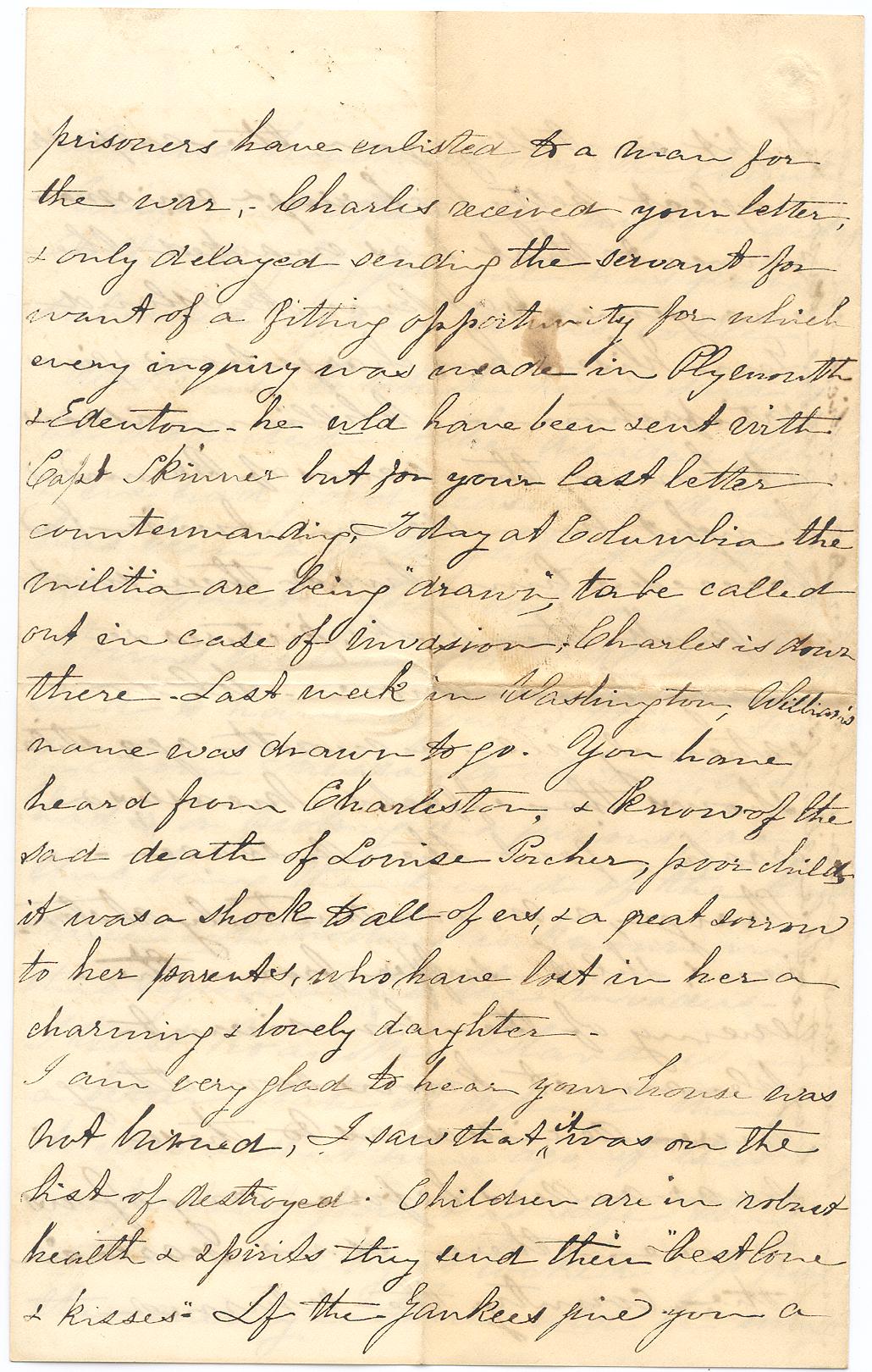 On Thursday I had that rare but most pleasant pleasure – a letter from you. I rejoice you are so well despite Yankee shell, & desperate weather – the most formidable foe of the two; so would seem to our soldiers. Scuppernong in common with all this country is stirred to its utmost recesses by the arrival of Burnsides fleet at Hatteras. The utmost uncertainty prevails as to its destination. The dispatch sent by old Gatlin to Raleigh startling the Convention into the scatteration of various members, terrifying Judge Biggs into adjourning the Confederate Court, then assembled at Edenton, & throwing various private alarms broadcast over the country, turns out after all, unfounded. So the doughty general has probably subsided again to his bottle, devotions to which he is said to be addicted. The dreaded fleet – & we had good reason to dread it, has been a fortnight at Hatteras, all quiet. The extraordinary storms we have recently had is said to have injured them seriously. From Tuesday to Friday, we had a prolonged & furious gale, this being the second of the kind since, [wh.] nothing is known in this region about the invaders. I trust Roanoke Island is in a better state of defence than it was a short time ago, if that important point is safe, this entire country is locked up from the enemy. There wld be small profit in telling you, the culpable neglect, petty bickering, & mismanagement that has marked the arrangements at Roanoke Island. Gen. Wise has charge now, & gives satisfaction. William is now at home the news of Burnsides brought him down. [Annie?] had preceded him two or three weeks to pack the books, pictures, &c, ready for a move. W. was extrememly ill a month ago, still shows the effects. Measles & erratic gout the disease – strange, a man austerely abstentious, shld suffer from the enemy of the bon vivant. We must know something more decided as to these marauders before any of us move. There is no scare in the country, the returned prisoners have enlisted to a [?] for the war. Charles received your letter, & only delayed sending the servant for want of a fitting opportunity for which every inquiry was made in Plymouth & Edenton – he wld have been sent with Capt. Skinner but for your last letter countermanding . Today at Columbia the militia are being “drawn,” to be called out in case of invasion. Charles is down there. Last week in Washington, William’s name was drawn to go. You have heard from Charleston, & know of the sad death of Louise Porcher, poor child, it was a shock to all of us, & a great sorrow to her parents, who have lost in her a charming & lovely daughter.

I am very glad to hear your house was not burned, I saw that it was on the list of destroyed. Children are in robust health & spirits they send their “best love & kisses.” If they Yankees give you a chance. I am sure you will lead your regiment to glory & honor. We expect to hear of you as Gen. before many moons. President Davis spoke of you in the most agreeable manner in Charles’s presence – on his recent visit to Richmond.

With love & every good wish for this New Year.

One Response to 27 January 1862: “We must know something more decided as to these marauders before any of us move.”