9 March 1862: “is it possible that the Recruiting angel from the unknown world has again broken into our family circle and taken one in the very bloom of youth…”

Posted on 9 Mar ’12 by Biff Hollingsworth

Item description: Letter, 9 March 1862, from Emmett Cole to his sister Celestia. Cole expresses his great sadness at hearing the news of the death of their brother, Edgar. 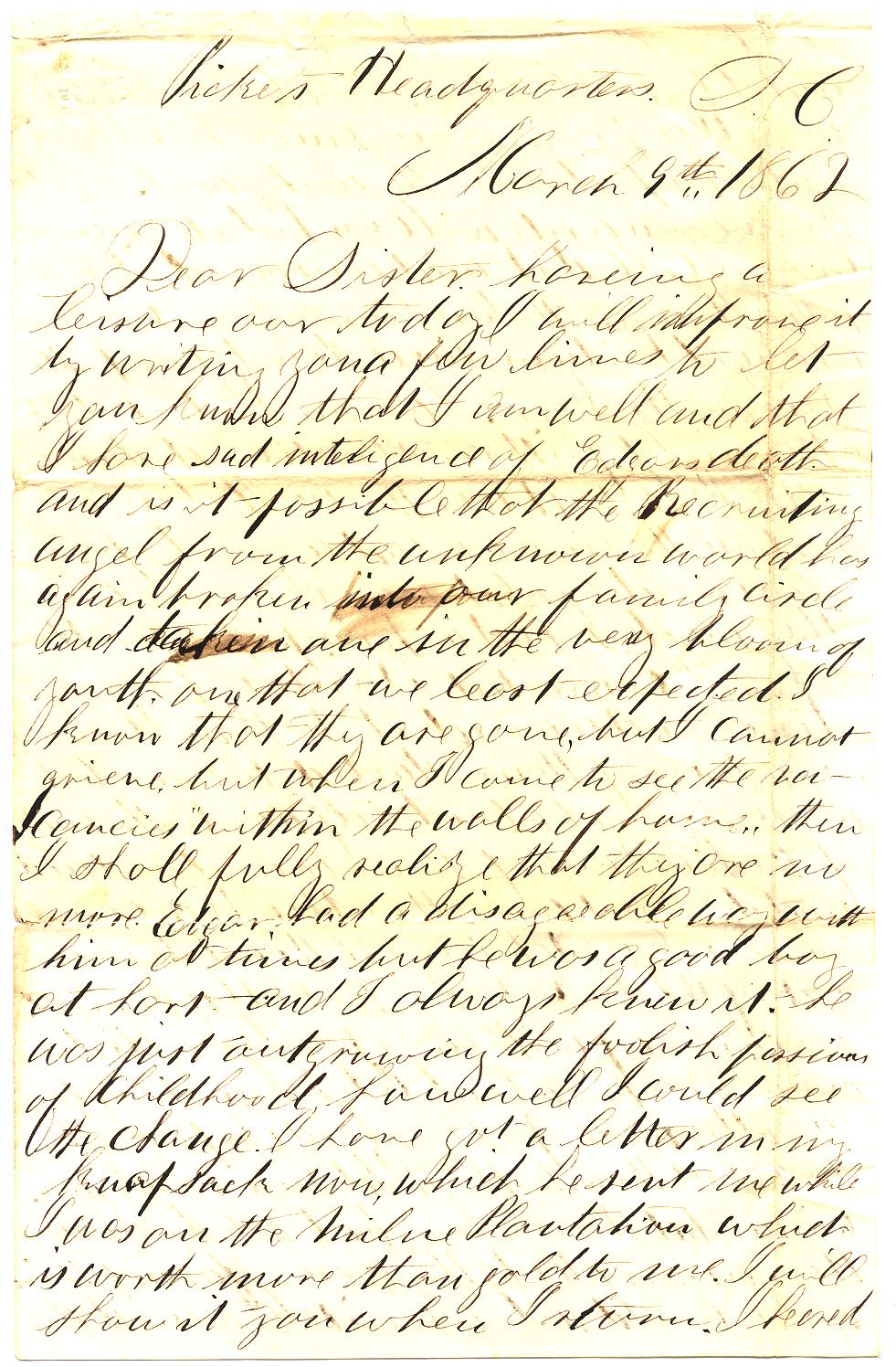 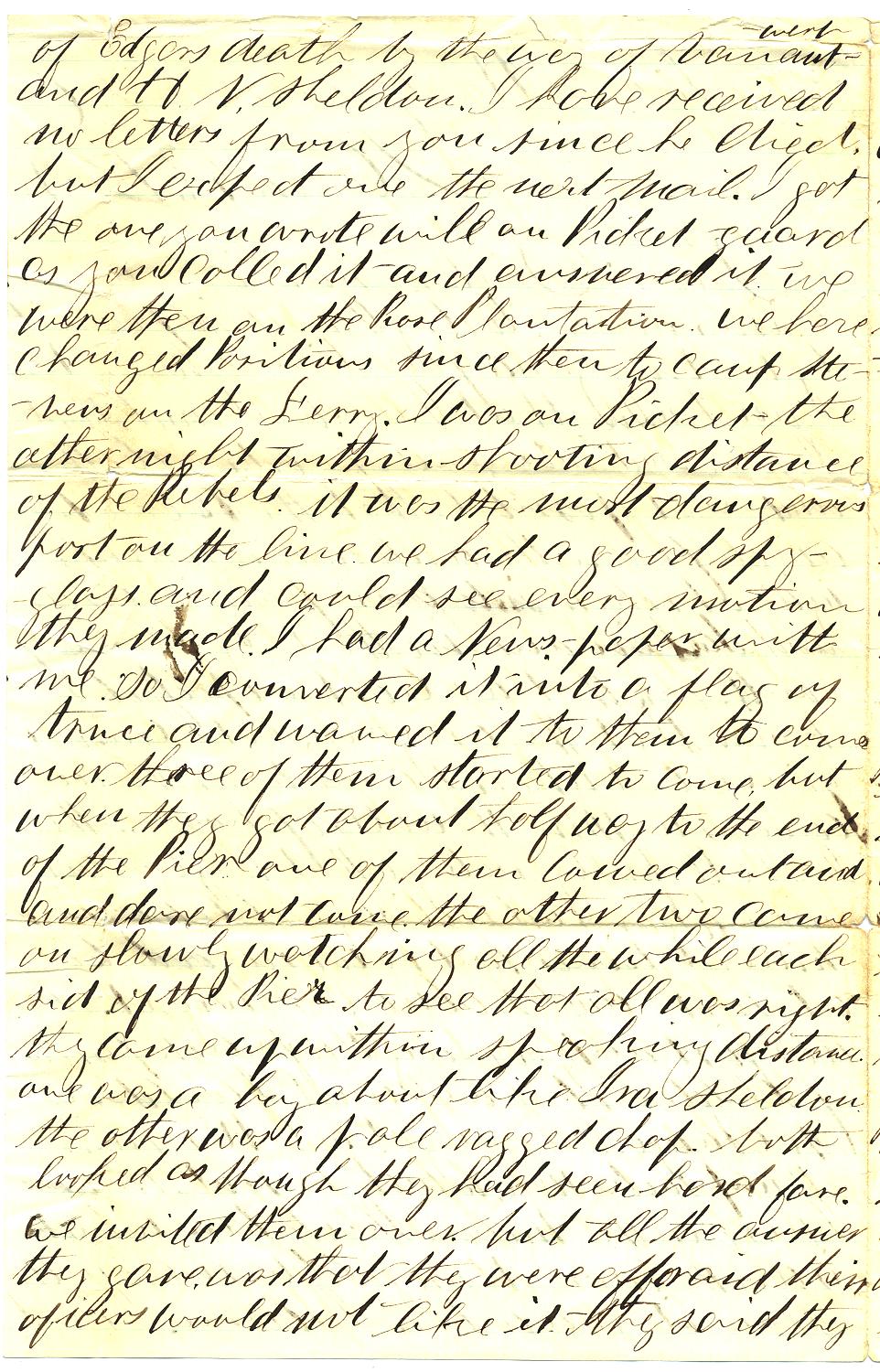 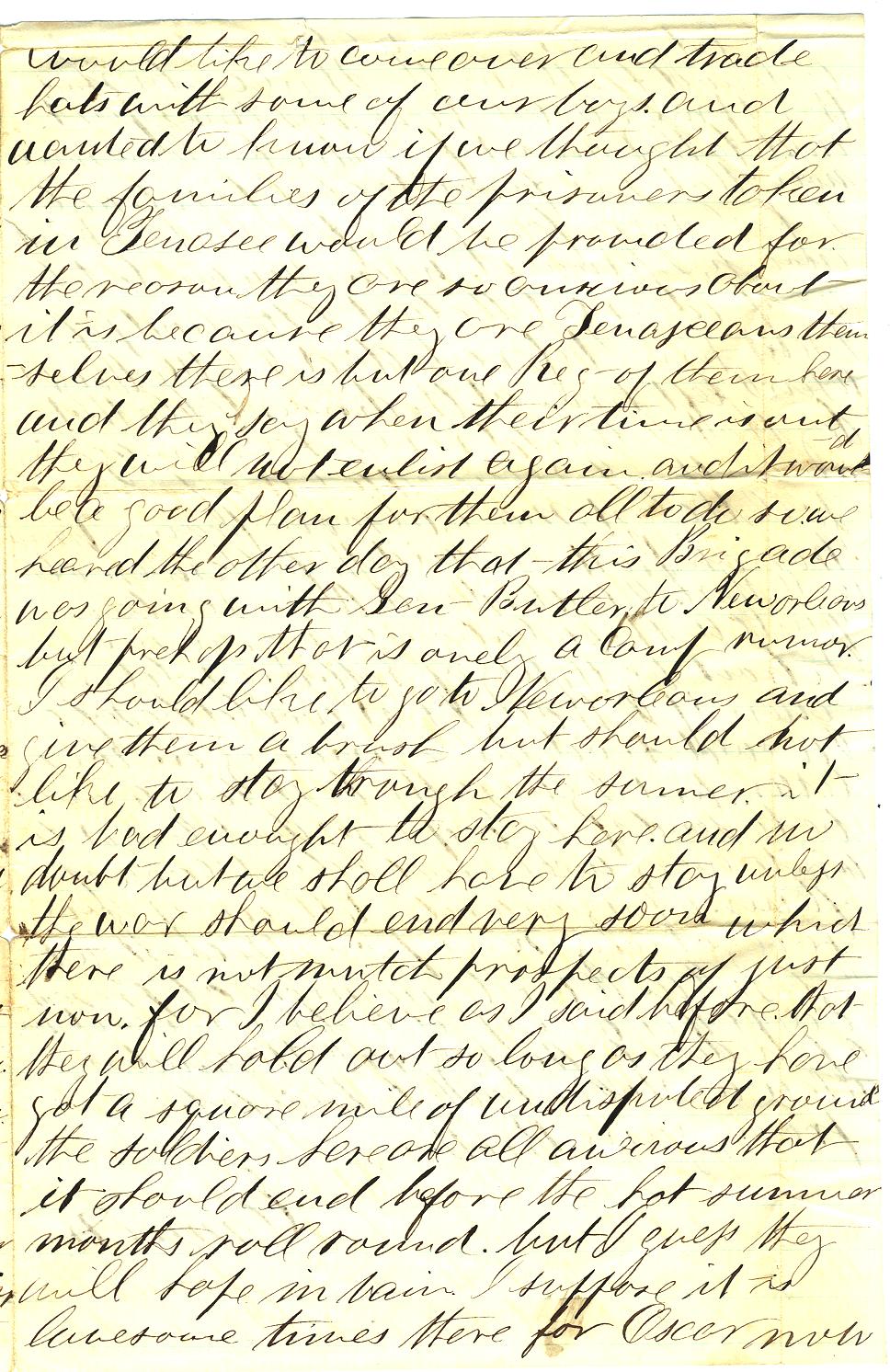 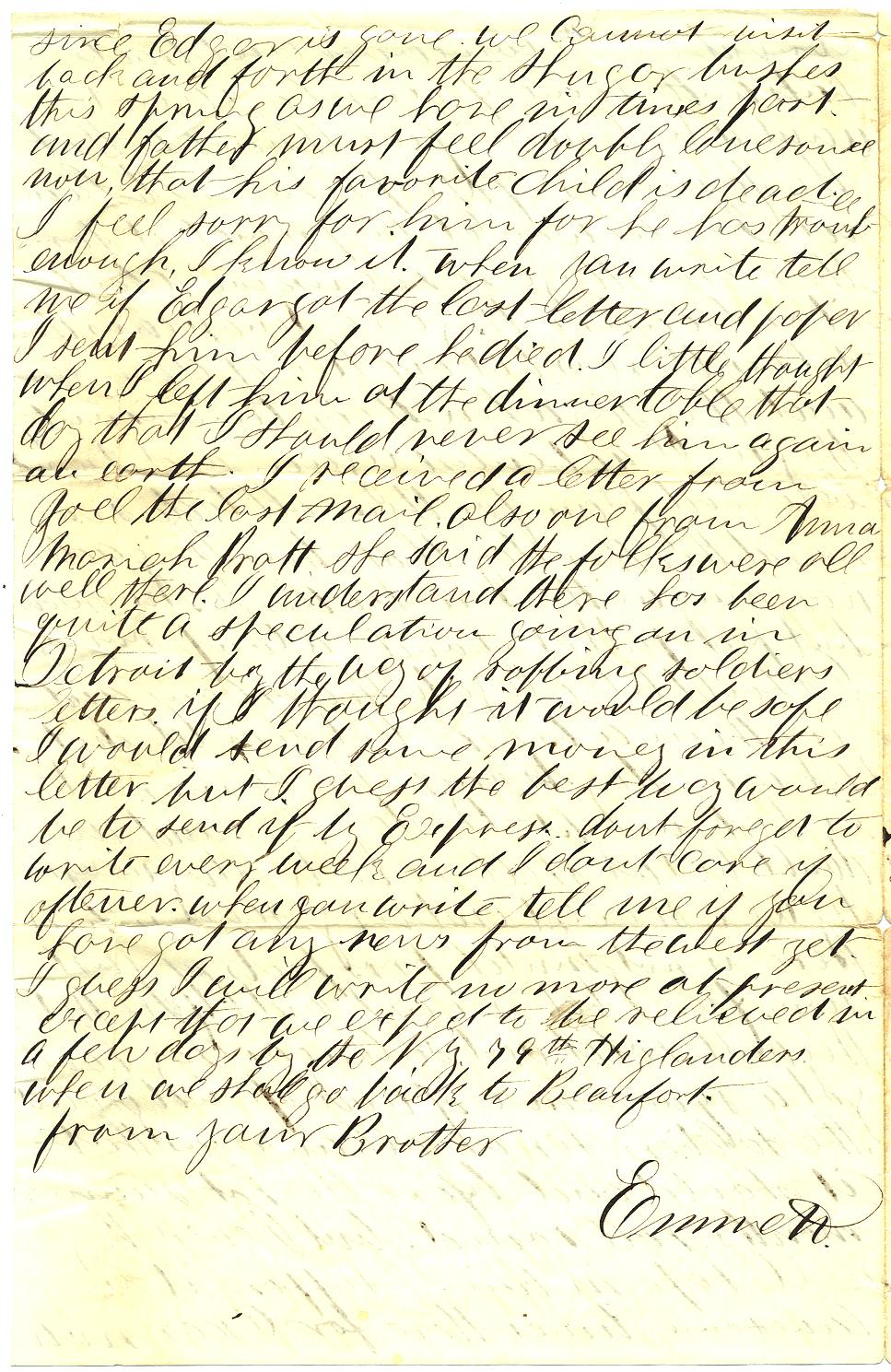 Dear Sister. haveing a leisure our today I will improve it by writing you a few lines to let you know that I am well and that I have sad inteligence of Edgars death. and is it possible that the Recruiting angel from the unknown world has again broken into our family circle and taken one in the very bloom of youth, one that we least expected. I know that they are gone, but I cannot grieve, but when I come to see the vacancies “within the walls of home” then I shall fully realize that they are no more. Edgar had a disagreeable way with him at times but he was a good boy at hart and I always knew it. he was just outgrowing the foolish passions of childhood, how well I could see the change. I have got a letter in my knapsack now, which he sent me while I was on the Milne Plantation which is worth more than gold to me. I will show it you when I return. I heared of Edgars death by the way of Vanautwert and H.N. Sheldon. I have received no letters from you since he died, but I expect one the next mail. I got the one you wrote wile on Picket guard as you called it and answered it. we were then on the Rose Plantation. we have changed Positions since then to camp Ste[p]hens on the ferry. I was on Picket the other night within shooting distance of the Rebels. it was the most dangerous post on the line. we had a good spyglass. and could see every motion they made. I had a News-paper with me. so I converted it into a flag of truce and waved it to them to come over. three of them started to come, but when they got about half way to the end of the Pier one of them Cowed out and and dare not come. the other two came on slowly watching all the while each sid of the Pier to see that all was right. they came up within speaking distance. one was a boy about like Ira Sheldon. the other was a pale ragged chap. both looked as though they had seen hard fare. we invited them over. but all the answer they gave, was that they were affraid their oficers would not like it. they said they would like to come over and trade hats with some of our boys. and wanted to know if we thought that the families of the prisoners taken in Tenasee would be provided for the reason they are so anxious about it is because they are Tenaseeans themselves there is but one Reg. of them here and they say when their time is out they will not enlist again. and it would be a good plan for them all to do so. we heared the other day that this Brigade was going with Gen. Butler to Neworleans but prehap that is only a Camp rumor. I should like to go to Neworleans and give them a brush, but should not like to stay through the sumer. it is bad enought to stay here. and no doubt but we shall have to stay unless the war should end very soon which there is not mutch prospects of just now. for I believe as I said before. that they will hold out so long as they have got a square mile of undisputed ground. the soldiers here are all anxious that it should end before the hot summer months roll round. but I guess they will hope in vain. I suppose it is lonesome times there for Oscar now since Edgar is gone. we cannot visit back and forth in the Shugor bushes this spring as we have in times past. and father must feel doubly lonesome now, that his favorite child is dead. I feel sorry for him for he has trouble enough, I know it. when you write tell me if Edgar got the last letter and paper I sent him before he died. I little thought when I left him at the dinner table that day that I should never see him again on earth. I received a letter from Joel the last mail. also one from Anna Mariah Pratt. she said the folks were all well there. I understand there has been quite a speculation going on in Detroit by way of robbing soldiers letters. if I thought it would be safe I would send some money in this letter but I guess the best way would be to send if by Express. dont forget to write every week and I dont care if oftener. when you write tell me if you have got any news from the west yet. I guess I will write no more at present except that we expect to be relieved in a few days by the N.Y. 79th Highlanders. when we shall go back to Beaufort. from your Brother