17 March 1862: “I had heared of his death before your last letter reached me, and have written since, but Celestia when I saw the curly lock of hair, I had to weep again…”

Posted on 17 Mar ’12 by Biff Hollingsworth

Item description: In a 9 March 1862 letter that we recently featured, Union soldier Emmett Cole wrote to his sister Celestia that he had just learned from a mutual acquaintance that Emmett and Celestia’s younger brother Edgar, who was too young to enlist in the Union army and had remained at home in Michigan, had died of an illness. By the time he wrote this letter on 17 March 1862, Emmett had received a letter from Celestia telling him of Edgar’s death, with a lock of Edgar’s hair enclosed.  In his reply, Emmett grieves anew, and compares Edgar’s death at home to the death of a friend or relative named John, who had served in the Union army and then died far from home, apparently while working as a waiter. 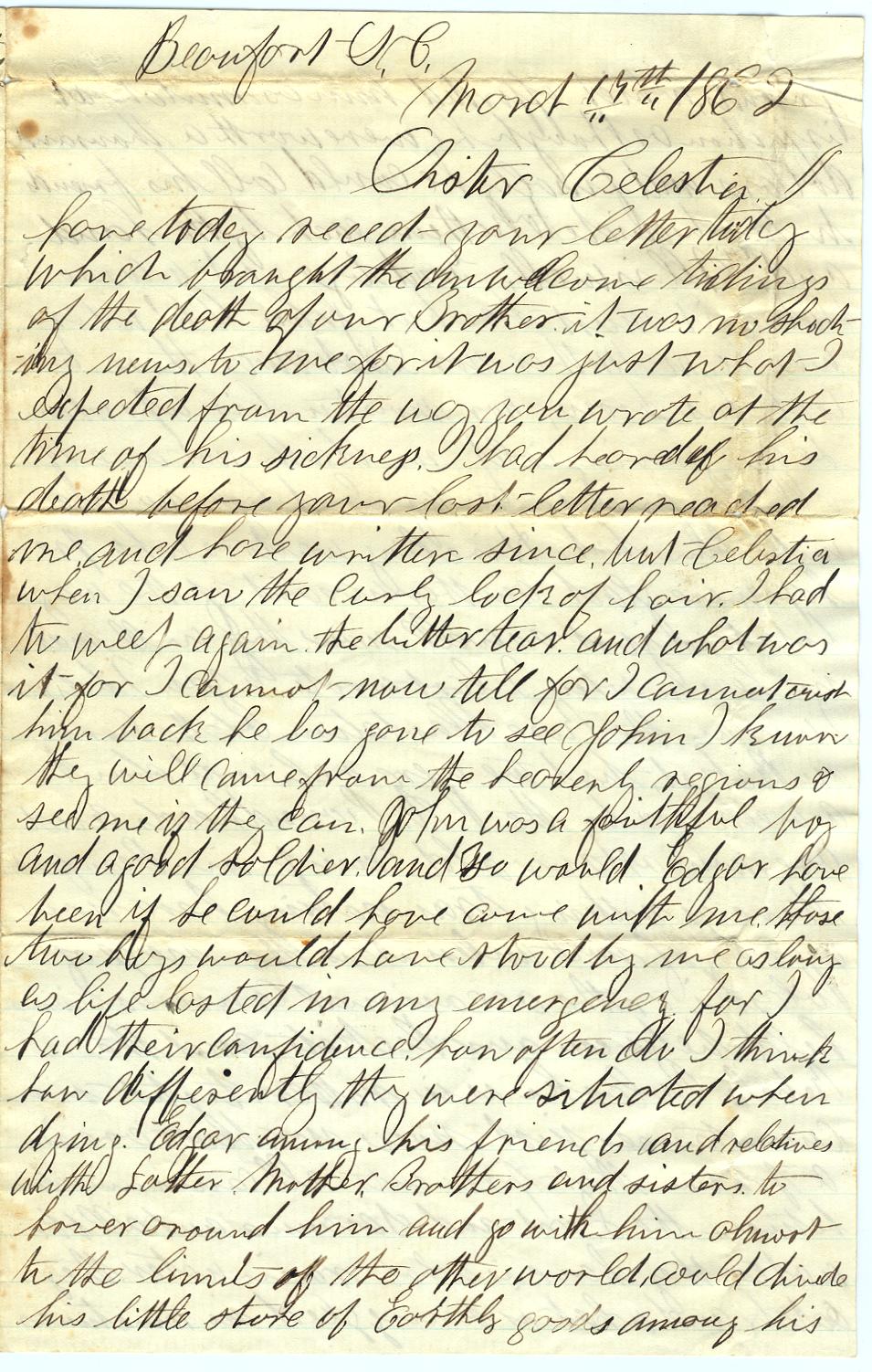 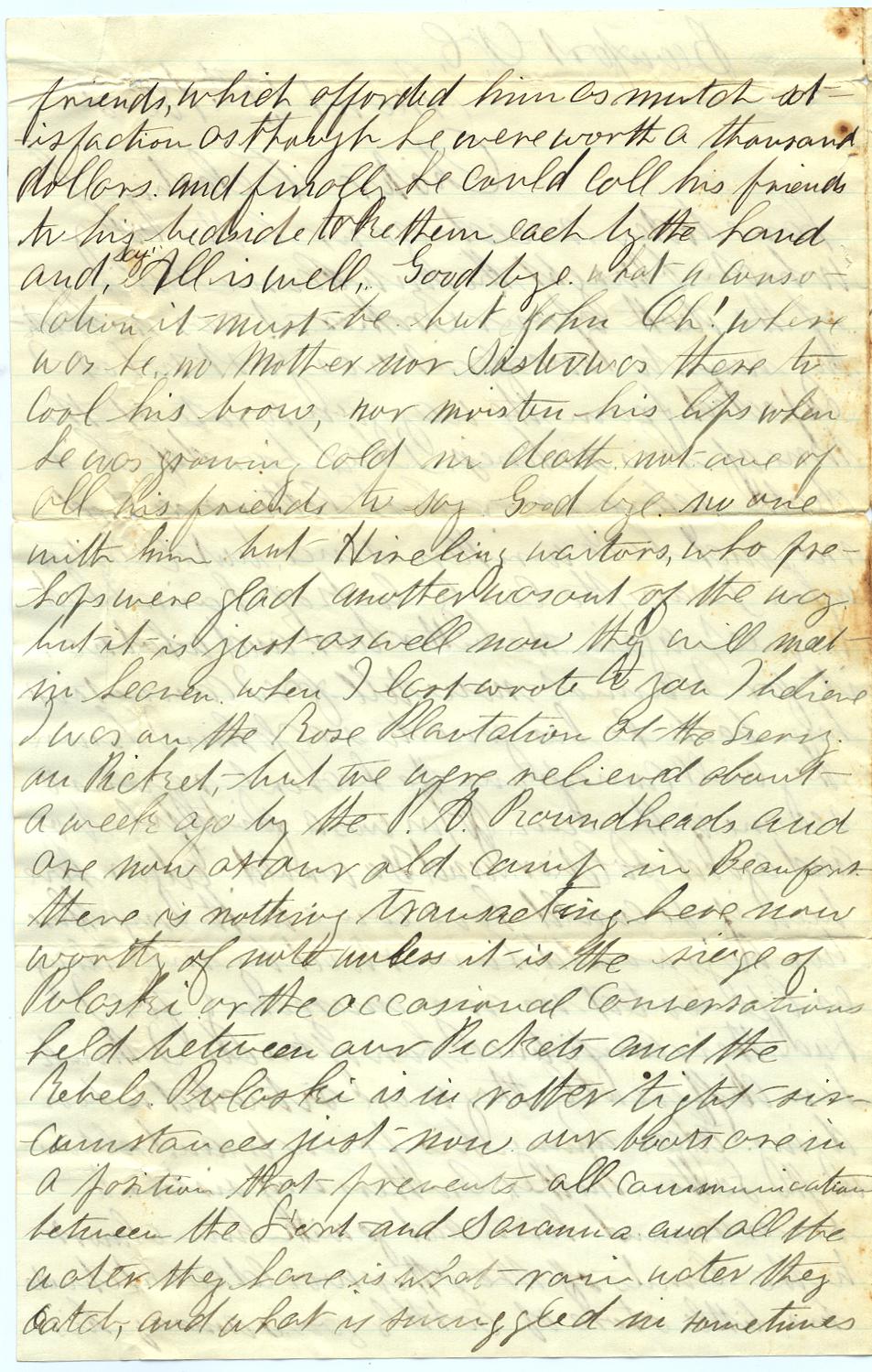 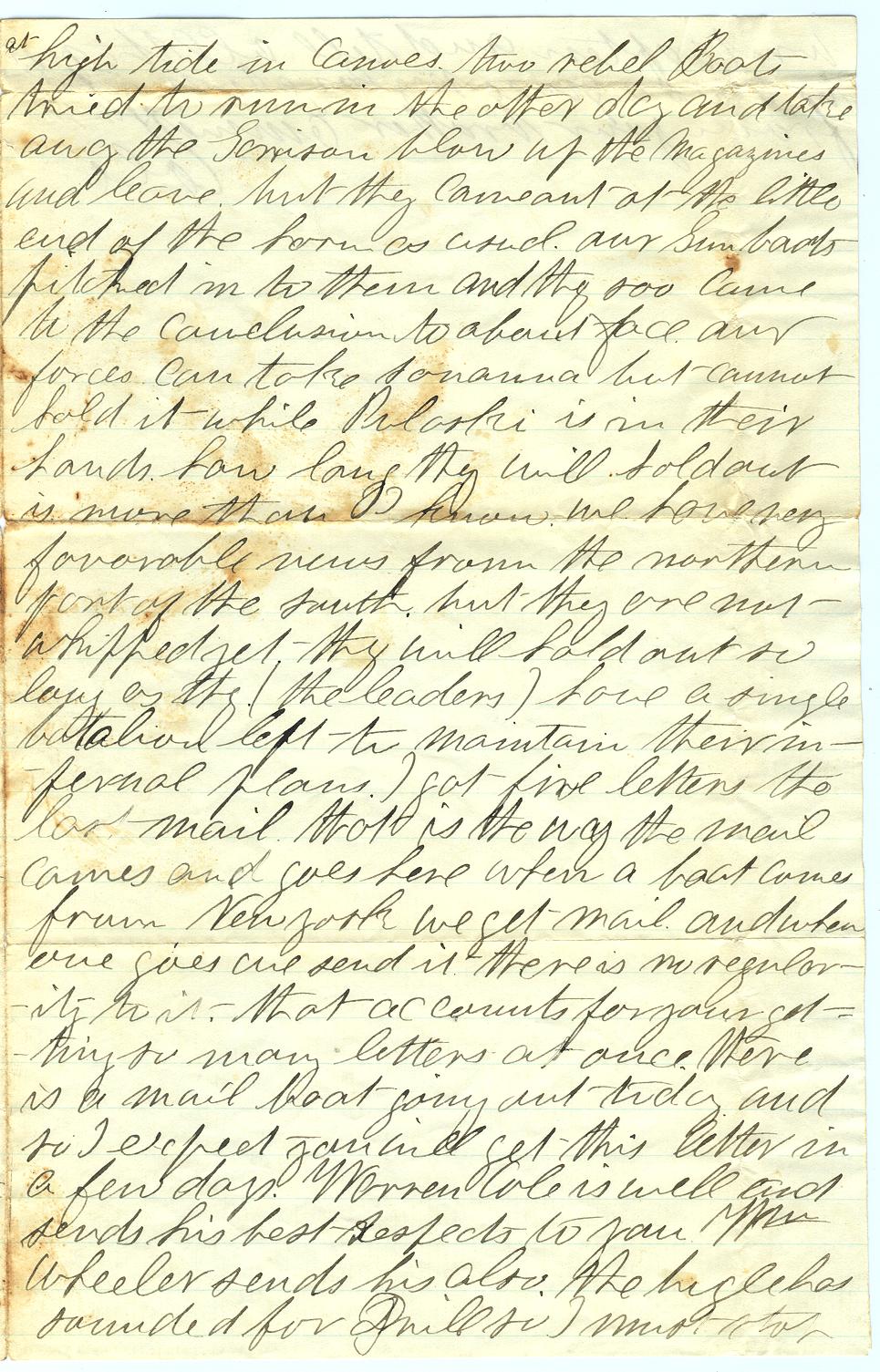 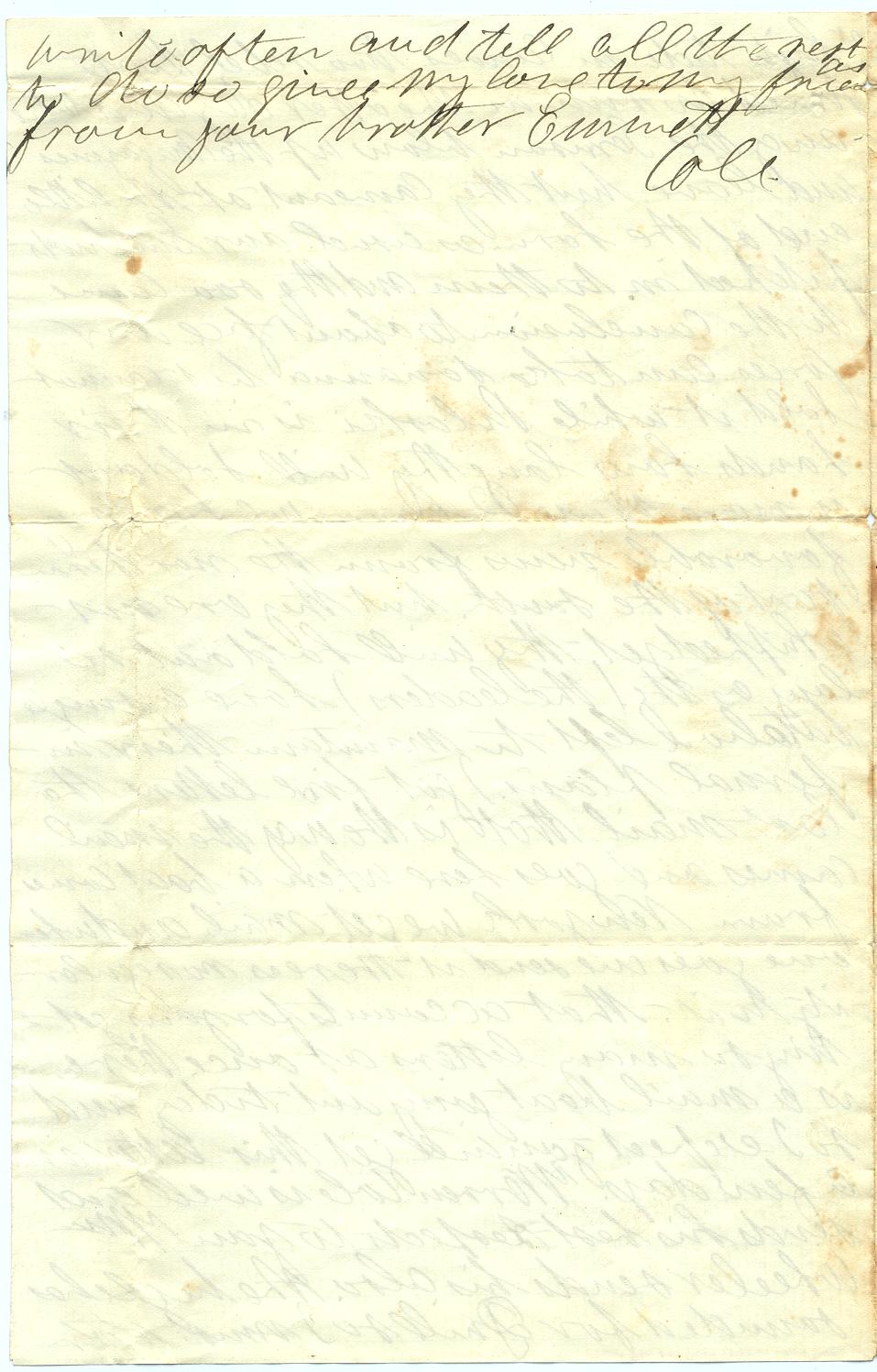 I have today reced. your letter today which brought the unwelcome tidings of the death of our Brother. it was no shocking news to me for it was just what I expected from the way you wrote at the time of his sickness. I had heared of his death before your last letter reached me, and have written since, but Celestia when I saw the curly lock of hair, I had to weep again, the bitter tear, and what was it for I cannot now tell for I cannot wish him back he has gone to see John I know they will come from the heavenly regions & see me if they can. John was a faithful boy and a good soldier, and so would Edgar have been if he could have come with me. those two boys would have stood by me as long as life lasted in any emergency, for I had their confidence. how often do I think how differently they were situated when dying. Edgar among his friends and relatives with Father, Mother, Brothers and sisters, to hover around him and go with him almost to the limits of the other world, could divide his little store of Earthly goods among his friends, which afforded him as mutch satisfaction as though he were worth a thousand dollars. and finally he could call his friends to his bedside take them each by the hand and say, “All is well,” Good bye. what a consolation it must be. but John Oh! where was he, no Mother nor Sister was there to cool his brow, nor moisten his lips when he was growing cold in death, not one of all his friends to say Good bye. no one with him but Hireling waitors, who prehaps were glad another was out of the way. but it is just as well now they will meet in heaven. when I last wrote you I believe I was on the Rose Plantation at the Ferry, on Picket, but we were relieved about a week ago by the P.A. Roundheads and are now at our old camp in Beaufort. there is nothing transacting here now worthy of note unless it is the siege of Pulaski or the occasional conversations held between our Pickets and the Rebels. Pulaski is in rather tight circumstances just now. our boats are in a position that prevents all communication between the Fort and Savanna and all the water they have is what rain water they catch, and what is smuggled in sometimes at high tide in canoes. two rebel Boats tried to run in the other day and take away the Garrison blow up the Magazines and leave, but they came out of the little end of the horn as usual. our Gun boats pitched in to them and they too came to the conclusion to about face. our forces can take Savanna but cannot hold it while Pulaski is in their hands. how long they will hold out is more than I know. we have very favorable news from the northern fort of the south, but they are not whipped yet. they will hold out so long as they (the leaders) have a single batalion left to maintain their infernal plans. I got five letters the last mail. that is the way the mail comes and goes here when a boat comes from New York we get mail, and when one goes we send it. there is no regularity to it. that accounts for your getting so many letters at once. there is a mail boat going out today and so I expect you will get this letter in a few days. Warren Cole is well and sends his best respects to you. Wm Wheeler sends his also. the bugle has sounded for Drill so I must stop write often and tell all the rest to do so give my love to my friends from your brother