20 March 1862: “The sunshine of secesion never sets in my soul: and, I hope, our country will be purified by the firery furnice we are passing through.”

Posted on 20 Mar ’12 by Biff Hollingsworth

Item description: Julius Alexander Robbins (1832-1864) was a Confederate soldier from Randolph County, N.C and Selma, Alabama. This letter was written by Julius Alexander Robbins to his cousin while serving on the Virginia Peninsula in 1862. The letter gives an account of military life there, including descriptions of hearing the Battle of Hampton Roads between the Monitor and the Merrimack ironclad warships.

More about Julius Alexander Robbins: Julius A. Robbins was born in Randolph County, N.C. in 1832. He graduated from the University of North Carolina in 1857, and then practiced law in Selma, Alabama. Robbins enlisted in the Confederate army in 1861 after the outbreak of the Civil War, leaving behind his wife Amanda and two children–a son and a daughter, whom Robbins mentions in this letter. He achieved the rank of Captain and served as the Assistant Quartermaster, 15th Regiment N.C. Troops, but was killed in battle near Mount Sterling, Ky. on 9 July 1864.

Following Robbins’ death, his wife Amanda and their children Gaston and Mary moved from Alabama to live with his family at Robbins Farm in Randolph County, N.C. Julius and Amanda’s son Gaston Ahi Robbins later became a lawyer in Selma, Alabama, and served several terms as a Congressman representing Alabama in the United States House of Representatives. 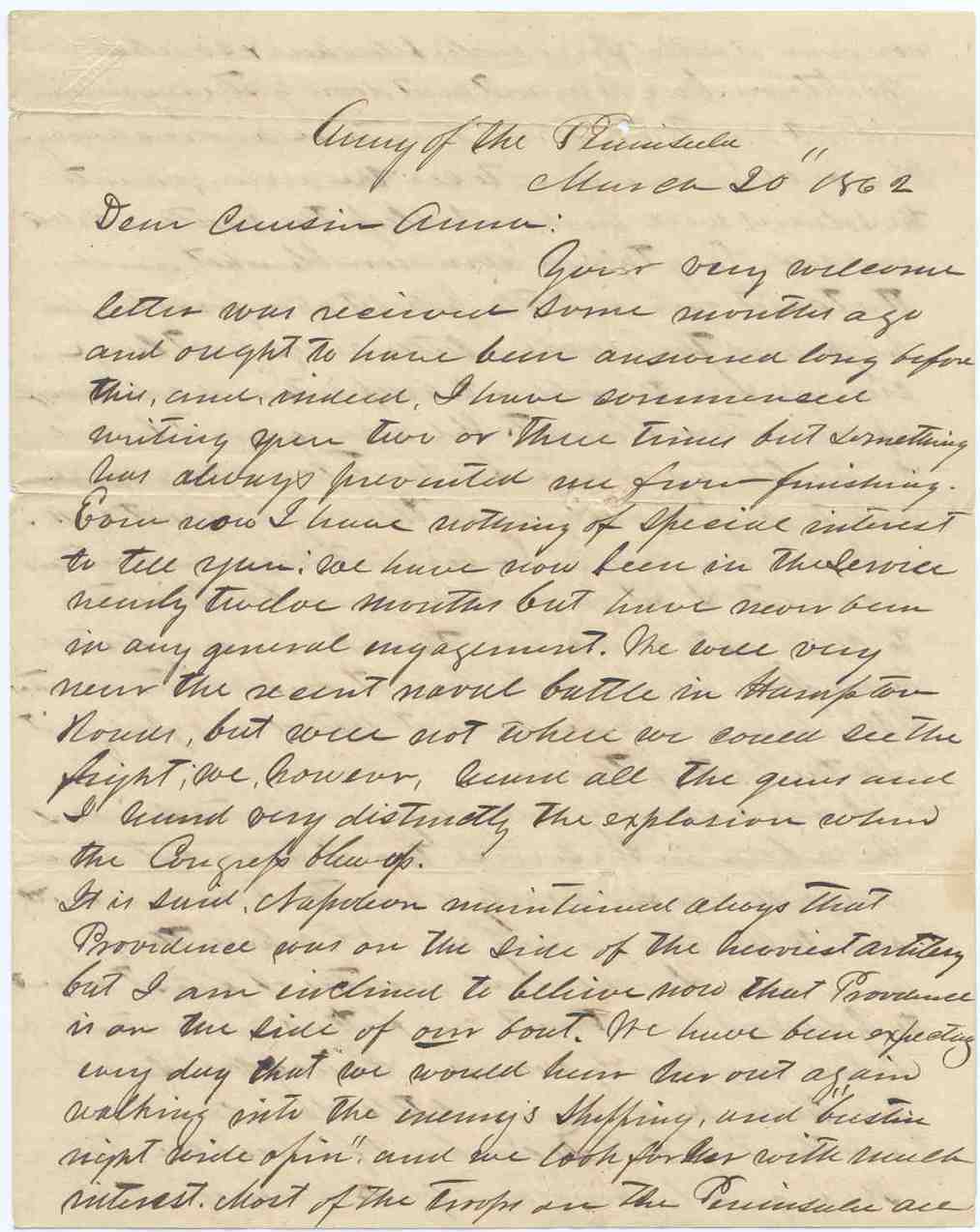 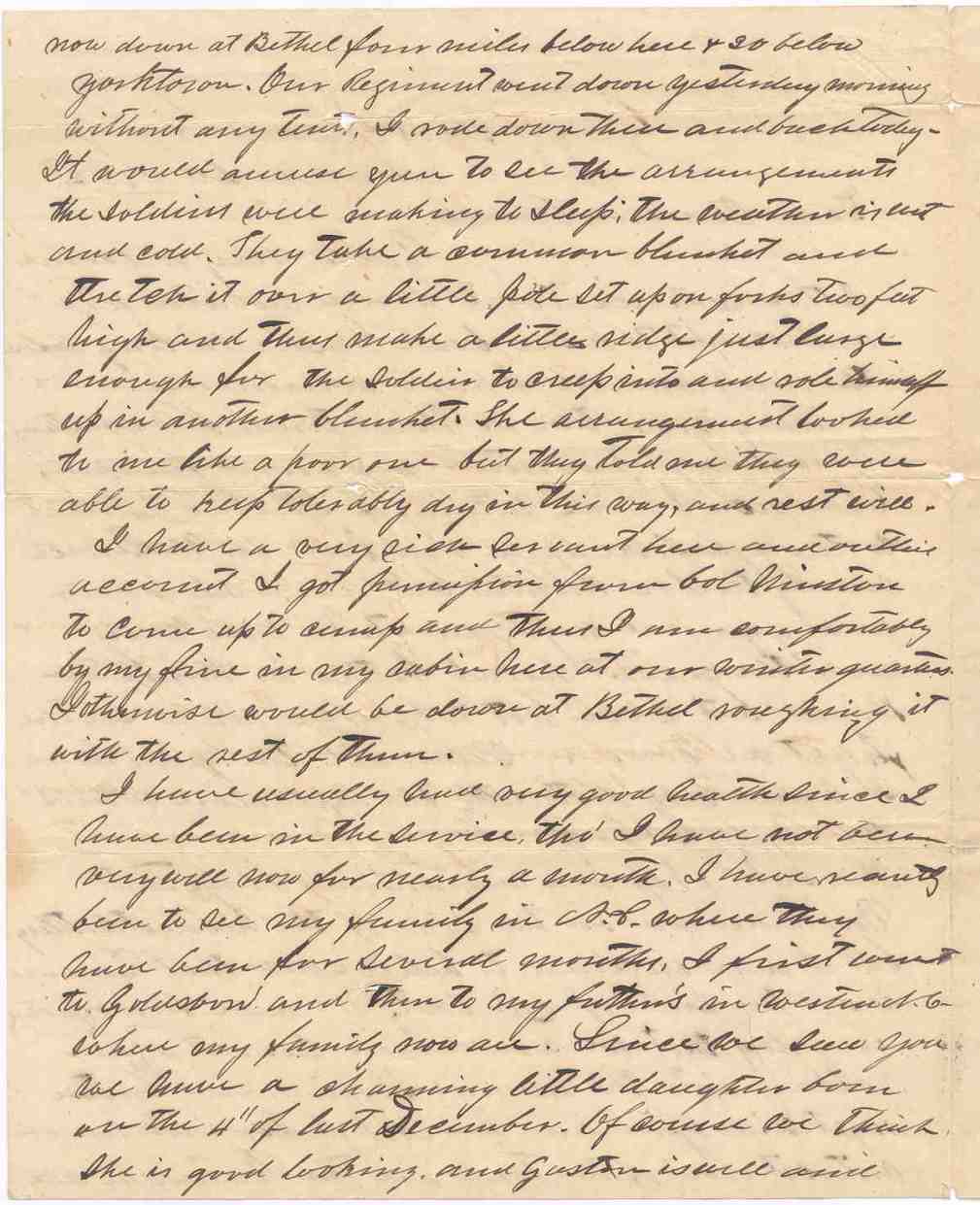 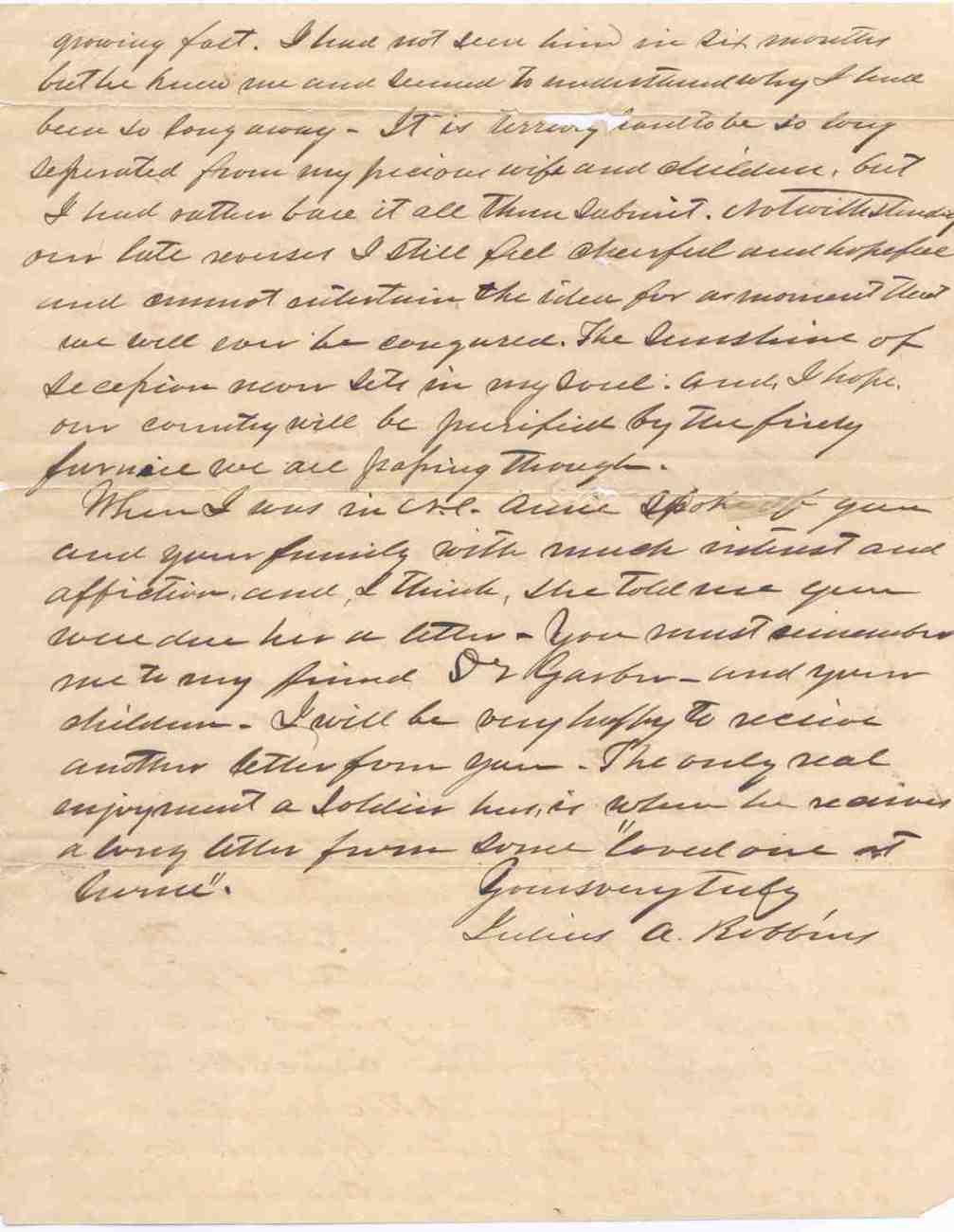 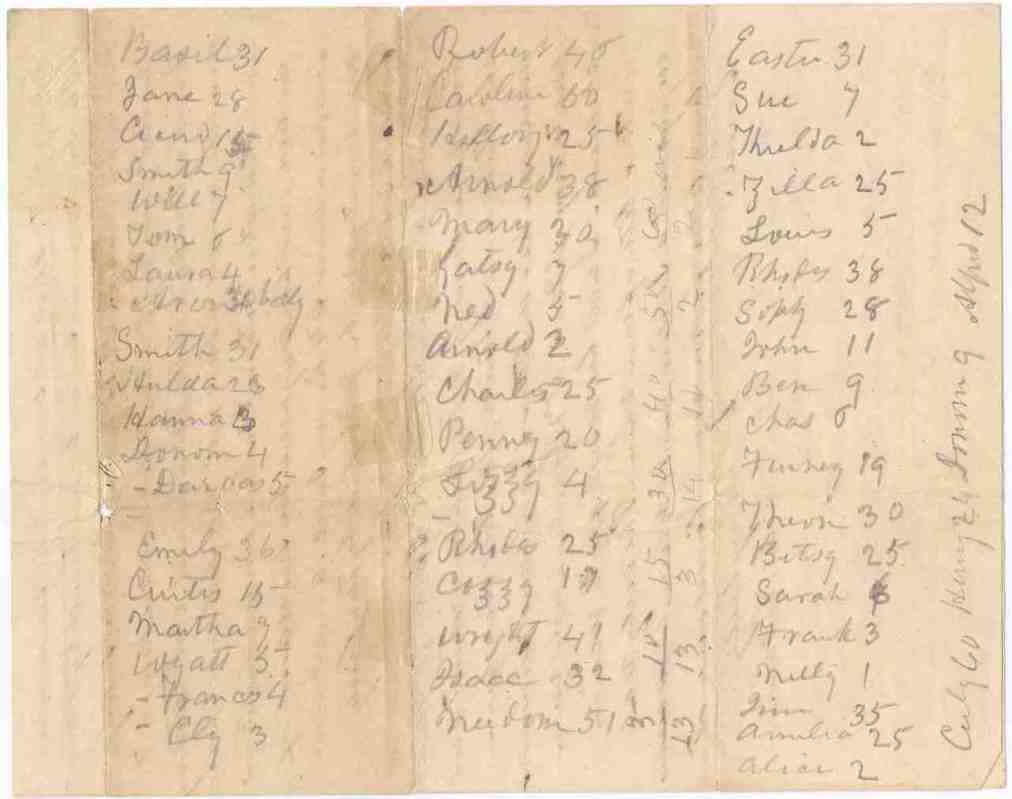 Your very welcome letter was received some months ago and ought to have been answered long before this, and, indeed, I have commensed writing you two or three times but something has always prevented me from finishing. Even now I have nothing of special interest to tell you; we have now been in the service nearly twelve months but have never been in any general engagement. We were very near the recent naval battle in Hampton Roads, but were not where we could see the fight; we, however, heard all the guns and I heard very distinctly the explosion when the Congress blew up.

It is said, Napoleon maintained always that Providence was on the side of the heaviest artilery but I am inclined to believe more that Providence is on the side of our boat. We have been expecting every day that we would hear her out again walking into the enemy’s shipping, and “bustin right wide open” and we look for her with much interest. Most of the troops on the Peninsula are now down at Bethel four miles below here & 20 below Yorktown. Our Regiment went down yesterday morning without any tents. I rode down there and back today – It would amuse you to see the arrangements the soldiers were making to sleep; the weather is wet and cold. They take a common blanket and stretch it over a little pole set up on forks two feet high and then make a little ridge just large enough for the soldier to creep into and role himself up in another blanket. The arrangement looked to me like a poor one but they told me they were able to keep tolerably dry in this way, and rest well.

I have a very sick servant here and on this account I got permission from Col [Winston?] to come up to camp and thus I am comfortably by my fire in my cabin here at our winter quarters. I otherwise would be down at Bethel roughing it with the rest of them.

I have usually had very good health since I have been in the service, tho’ I have not been very well now for nearly a month. I have [recently?] been to see my family in N.C. where they have been for several months, I first went to Goldsboro and then to see my father’s in western N.C. to where my family now are. Since we seen you we have a charming little daughter born on the 4″ of last December. Of course we think she is good looking, and Gaston is well and growing fast. I had not seen him in six months but he knew me and seemed to understand why I had been so long away – It is terribly hard to be so long separated from my precious wife and children, but I had rather bare it all than submit. Notwithstanding our late reverses I still feel cheerful and hopeful and cannot sustain the idea for a moment that we will ever be conquered. The sunshine of secesion never sets in my soul: and, I hope, our country will be purified by the firery furnice we are passing through.

When I was in N.C. [Annie?] spoke of you and your family with much interest and affiction, and, I think, she told me you were due her a letter – You must remember me to my friend Dr. Garber – and your children. I will be very happy to receive another letter from you. The only real enjoyment a Soldier has, is when he receives a long letter from some “loved one at home”.

Yours very truly
Julius A. Robbins