14 April 1862: “This is the anniversary of the fall of Ft Sumter and we have had the sad news confirmed of the loss of Ft Pulaski to us — I was not prepared for this, believing it impregnable.”

Item description: In this letter, Mary Henderson writes to her son John Steele Henderson, who was a student in Chapel Hill, N.C. at the University of North Carolina. Mary Henderson discusses local news, the Battle of Shiloh, and other war news. She also discusses several of John’s classmates at UNC, including Junius Davis (son of George Davis, a senator from Wilmington, N.C.), James R. Moore, and Kerr Craige.  She also refers to John’s brother Leonard “Len” Henderson, who was serving in the Confederate army but was home on furlough, and later died in battle in 1864. 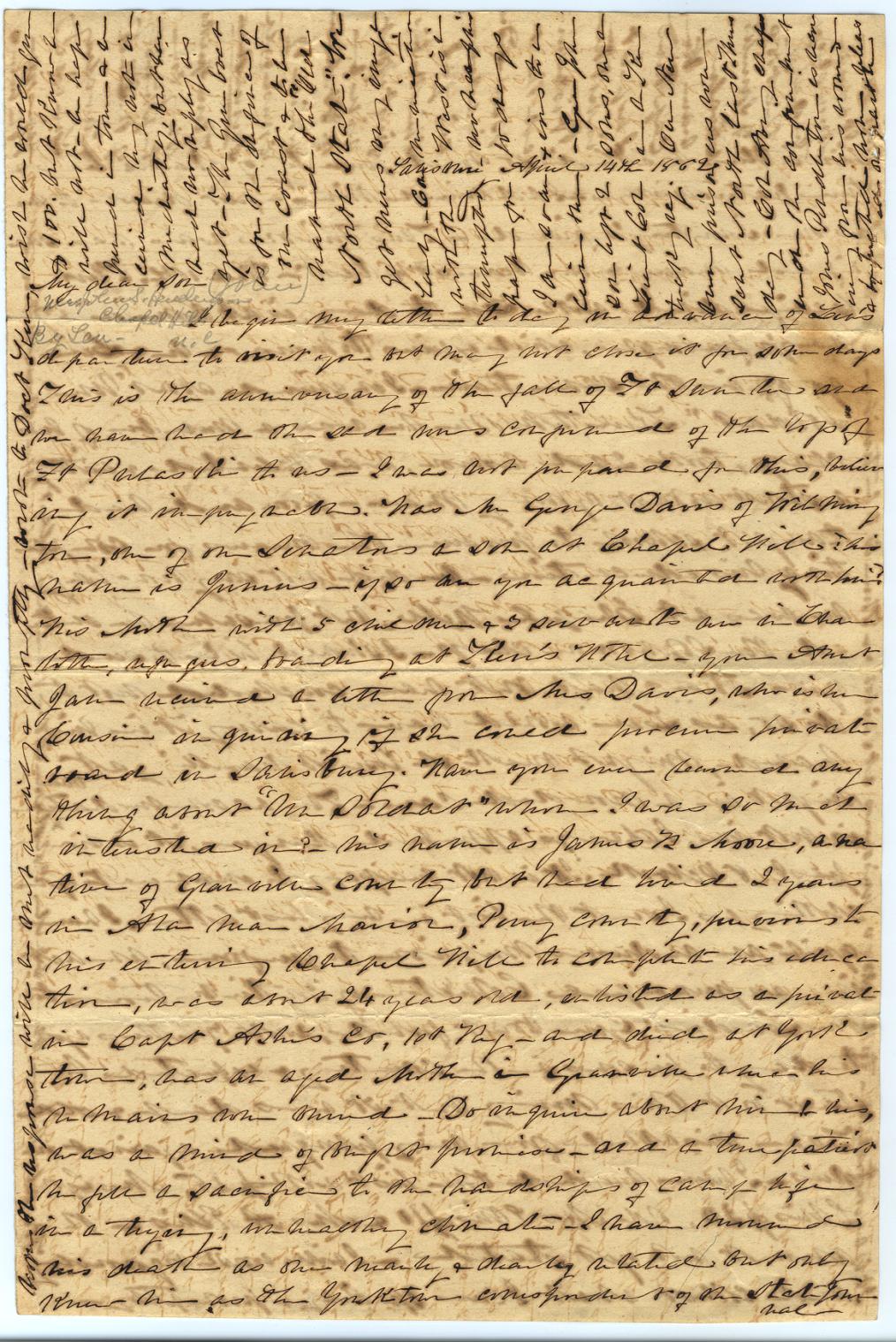 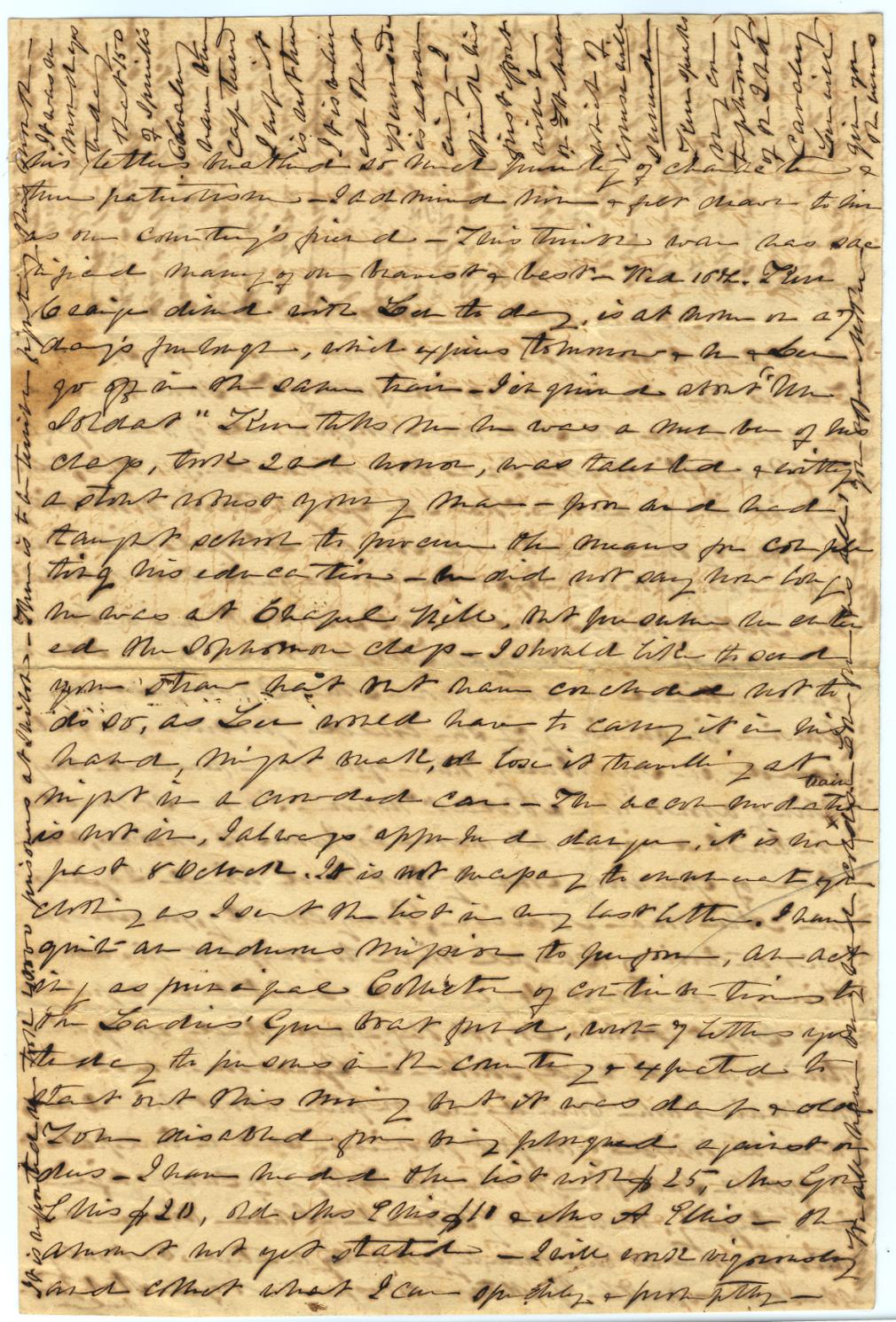 This is the anniversary of the fall of Ft Sumter and we have had the sad news confirmed of the loss of Ft Pulaski to us — I was not prepared for this, believing it impregnable. Has Mr George Davis of Wilmington, one of our Senators a son at Chapel Hill? his name is Junius — if so are you acquainted with him? His mother with 5 children & 3 servants are in Charlotte, refugees, boarding at Kerr’s mother — your Aunt Jane received a letter from Mrs Davis, who is her Cousin inquiring if she could purchase private board in Salisbury. Have you ever learned any thing about “Mr Soldat” whom I was so much interested in? — his name is James R Moore, a native of Granville County but had lived 2 years in Ala near Marion, Perry County, previous to his entering Chapel Hill to complete his education, was about 24 years old, enlisted as a private in Capt Ashe’s Co, 1st Reg — and died at Yorktown, has an aged Mother in Granville where his remains [were?] buried — Do inquire about him [for?] his was a mind of bright promise — and a true patriot he fell a sacrifice to the hardships of camp life in a trying, unhealthy climate — I have mourned his death as one nearly & dearly related but only know him as the Yorktown correspondent of the State Journal — his letters [?]thed so much of [?] character & true patriotism — I admired him & felt drawn to him as our country’s friend — This terrible war has sacrificed many of our bravest & best — Wed 16th. Kerr dined with Len to day, is at home on a 7 day’s furlough, which expires tomorrow & he & Len go off in the same train — I inquired about “Mr. Soldat” Kerr thinks that he was a member of his class, took 2nd honor, was talented & witty a stout robust young man — [?] and had taught school to procure the means for completing his education — he did not say how long he was at Chapel Hill, but [?] he entered the sophomore class — I should like to send your straw hat but have concluded not to do so, as Len would have to carry it in his hand, might break, or lose it travelling at night in a crowded car — the train accomodation is not [in?], I always apprehend danger, it is now past 8 O clock. It is not necessary to ennumerate your clothing as I sent the list in my last letter. I have quite an arduous mission to perform, am acting as principal Collector of contributions to the Ladies’ Gun Boat fund, wrote 7 letters yesterday to persons in the country & expected to start out this morning but it was damp & old [Jon?] disabled from being [?]ed against orders — I have headed the list with $25, Mrs. [?] $20, old Mrs Lewis $10 & Mrs A Ellis — the amount not yet stated — I will [arise?] vigorously and collect what I can speedily & promptly —

[hope?] the response will be met readily & promptly — wrote to Doct Kerr, wish he would give $100. but know he will not — he happened in town & received my note immediately, but has recd no reply as yet — The Gun boat is for the defence of the coast & to be named the “Old North State.” We get news very irregularly — Communication with the West is interrupted — [?] his paper for 10 days I am so anxious to receive them — Cpn Johnson left 2 sons, one a Lieut Col in a Kentucky reg. Our New bern prisoners were sent North last Thursday — [?]

It is reported we took 40,000 prisoners at Shiloh — There is to be terrible fighting this month — It was rumored yesterday that 160 of Spruill’s Calvalry have been captured I hope it is not true — It is believed that Burnside is advancing — I think his first effort will be on Ft Macon which of course will surrender — Kerr speaks very contemptuously of the 2nd Cavalry Len will give you the news

We all have [?] bad colds — Love from us all, your affec Mother