24 April 1862: “the report is that some of the gun boats have passed the forts, & that there is every probability that the Federals or rather Lincolnites will be able to get up to the city.”

Posted on 24 Apr ’12 by Biff Hollingsworth

Item description: Letter, dated 24 April 1862, from Frances Devereux Polk to her husband Leonidas Polk, major general in the Army of Mississippi, about the imminent capture of the city of New Orleans. The letter comes a few weeks after Polk commanded the First Corps of the Army of Mississippi at the Battle of Shiloh and was written by Frances Polk on the day that U.S. Flag Officer David G. Farragut broke through the ring of Confederate fortifications and defenses on the Mississippi River, sending thirteen ships from the Union fleet upriver towards the city of New Orleans. On 25 April 1862, Farragut’s Union naval forces set anchor in the city. New Orleans was formally surrendered on 28 April.

After traveling and living with Frances in various places from Virginia to Louisiana, Leonidas Polk was made bishop of Louisiana in 1841. He became a sugar planter, utilizing a large number of slaves inherited by his wife from the Devereux family of North Carolina. He also helped found the University of the South in Sewanee, Tenn., in 1857. In 1861, he was appointed major general in the Confederate army; and in 1862, promoted to lieutenant general. He served in independent command and as corps commander under generals Albert Sidney Johnston, Braxton Bragg, and Joseph E. Johnston. He was killed during the Atlanta campaign on 14 June 1864. Frances Devereux Polk rented a house in Asheville, N.C., during the second half of the Civil War, and afterwards spent much of her time with her daughter Katherine Polk Gale and son in law William Dudley Gale, near Nashville, Tenn. She died in 1875. 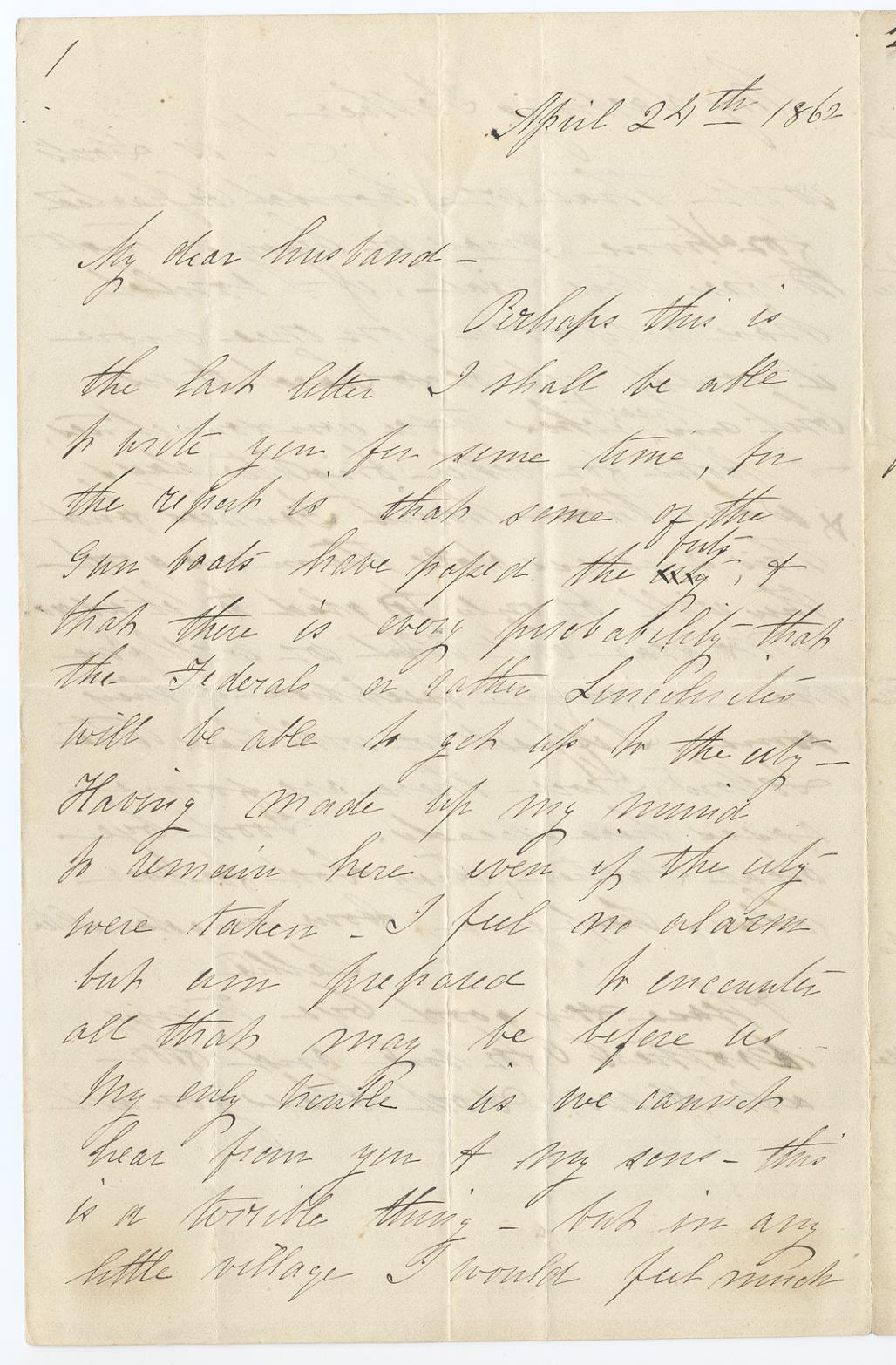 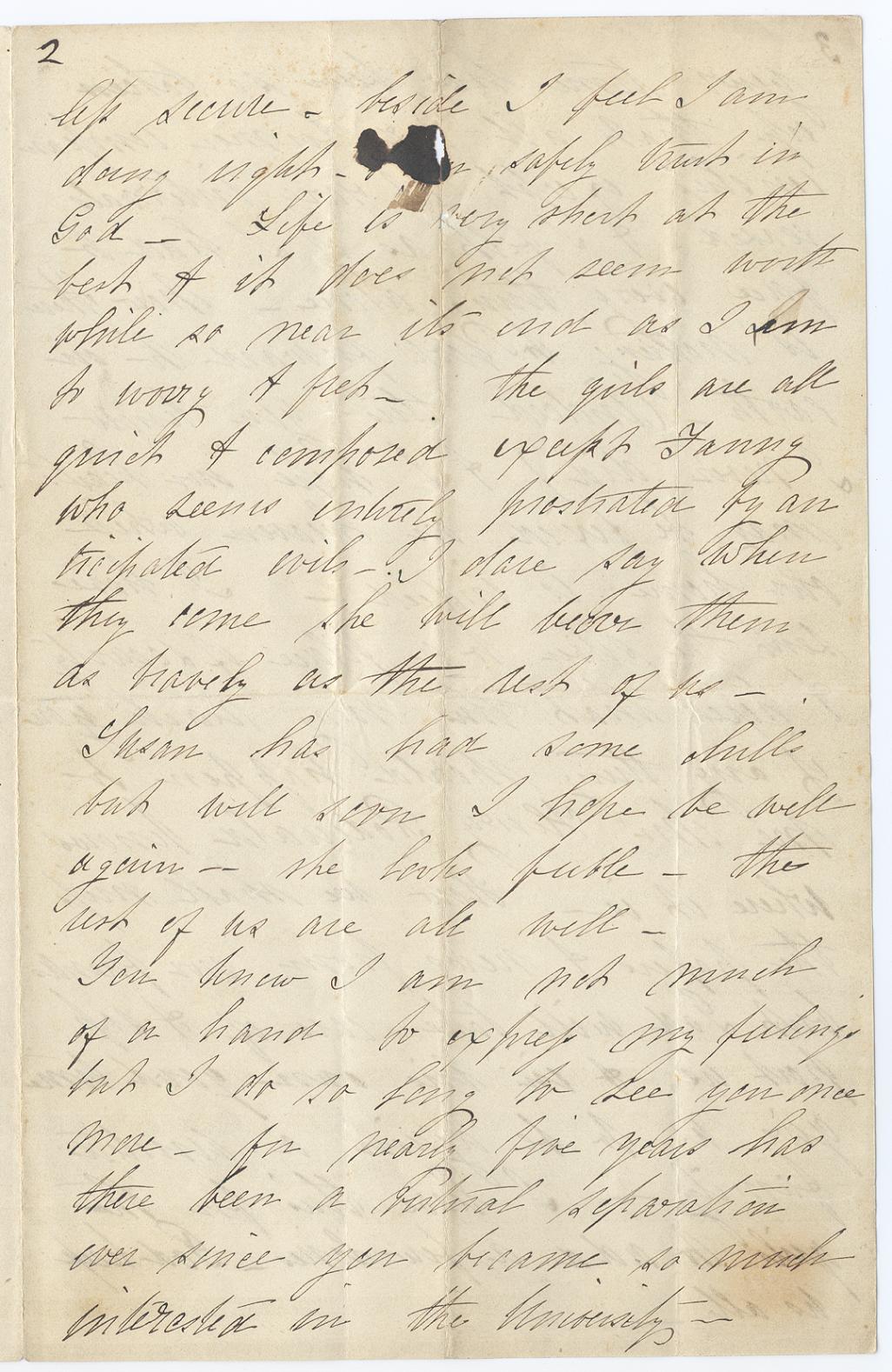 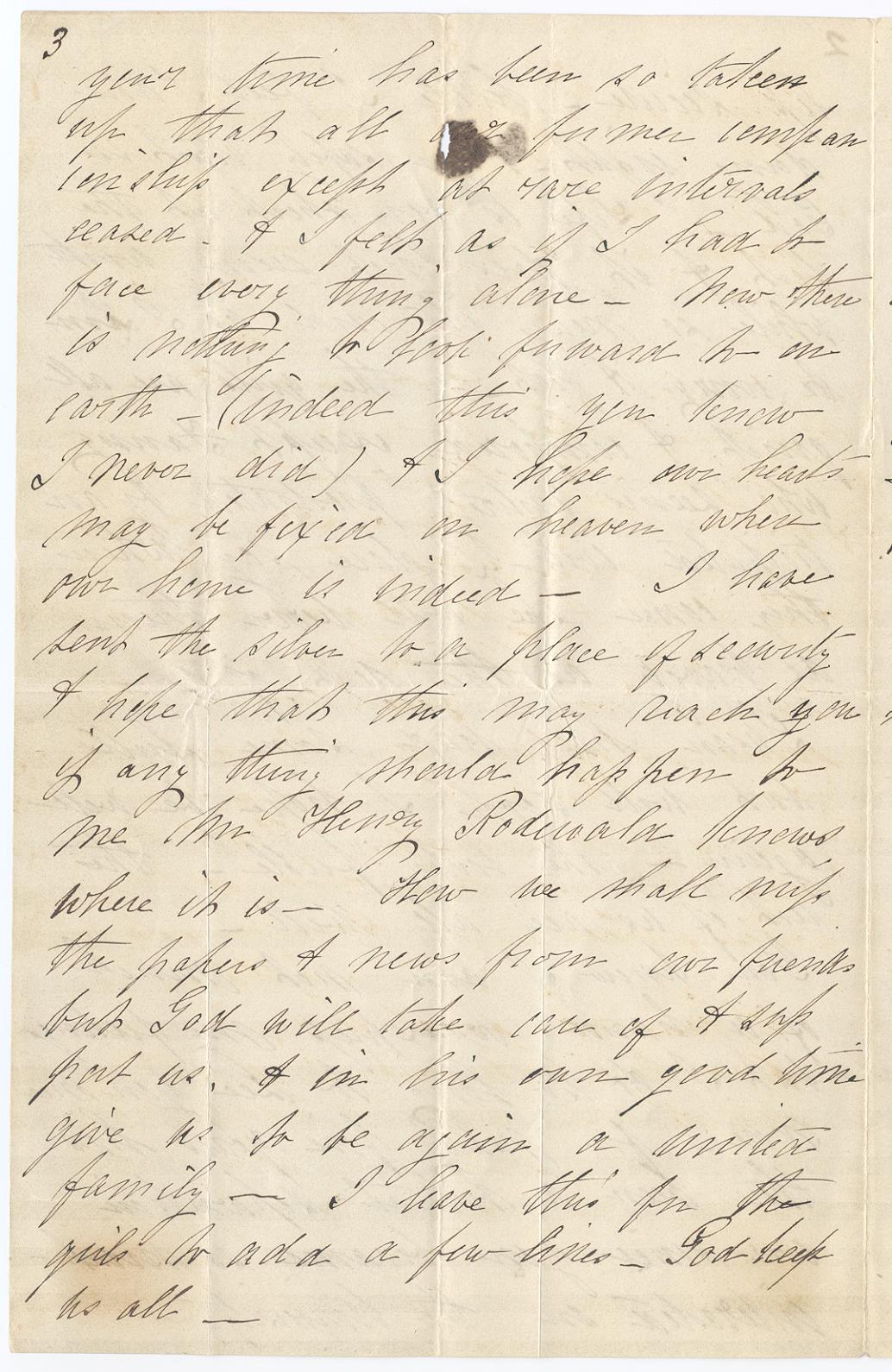 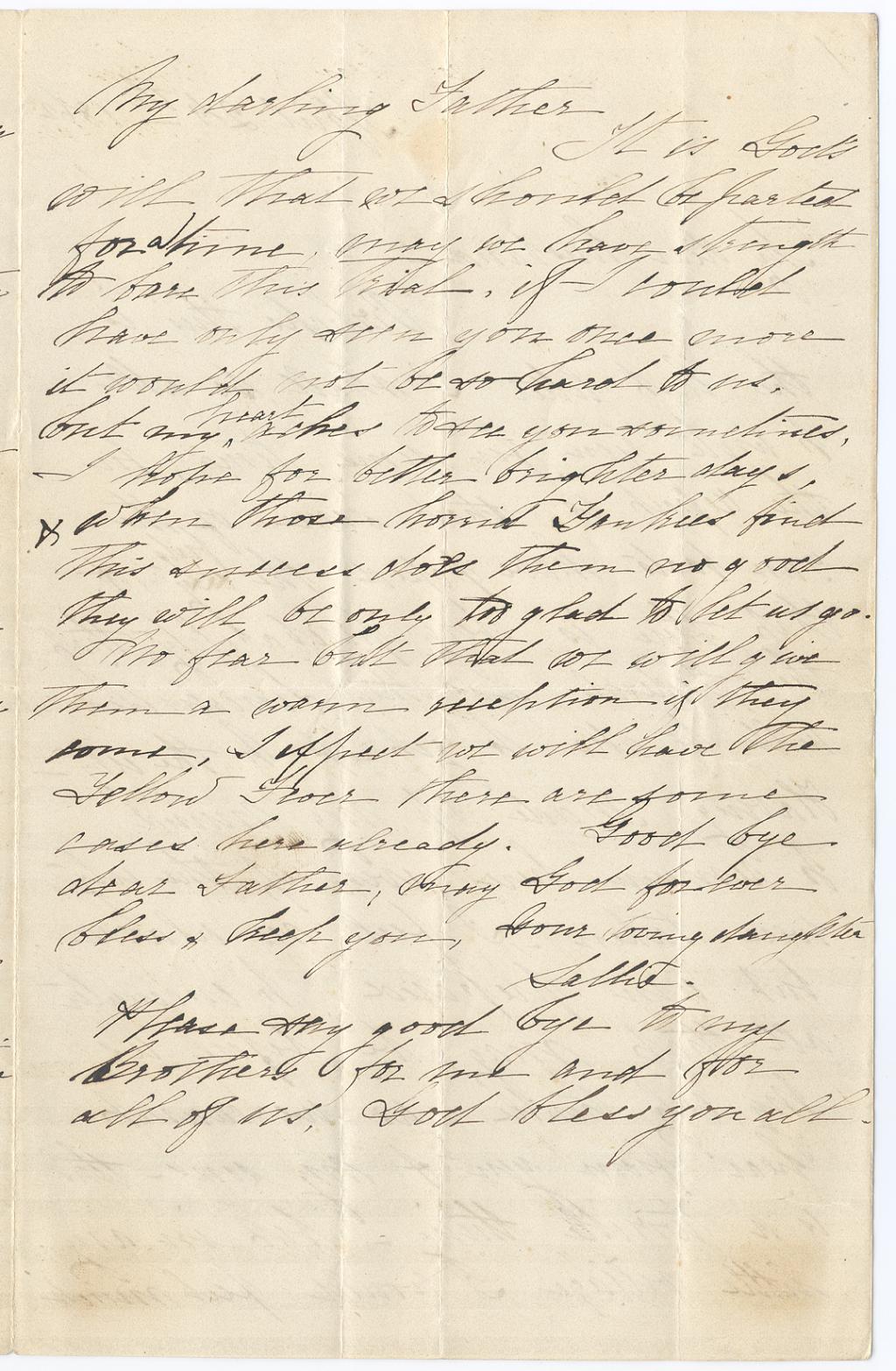 Perhaps this is the last letter I shall be able to write you for some time, for the report is that some of the gun boats have passed the forts, & that there is every probability that the Federals or rather Lincolnites will be able to get up to the city. Having made up my mind to remain here even if the city were taken. I feel no alarm but am prepared to encounter all that may be before us. My only trouble is we cannot hear from you & my sons – this is a terrible thing, but in any little village I would feel much less secure. beside I feel I am doing right. [] safely trust in God. Life is very short at the best & it does not seem worth while so near its end as I am to worry & fret. the girls are all quiet & composed except Fanny who seems entirely prostrated by anticipated evils. I dare say when they come she will bear them as bravely as the rest of us.

Susan has had some chills but will soon I hope be well again. she looks feeble. the rest of us are all well.

You know I am not much of a hand to express my feelings but I do so long to see you once more, for nearly five years has there been a virtual separation ever since you became so much interested in the University. your time has been so taken up that all our former companionship except at rare intervals ceased. & I felt as if I had to face every thing alone. Now there is nothing to look forward to on earth. (indeed this you know I never did) & I hope our hearts may be fixed on heaven where our home is indeed. I have sent the silver to a place of security & hope that this may reach you if any thing should happen to me. Mr. Henry Rodewald[?] knows where it is. How we shall miss the papers & news from our friends but God will take care of & support us. & in his own good time give us to be again a united family. I leave this for the girls to add a few lines. God keep us all.

It is God’s will that we should be parted for a time, may we have strength to bare this trial, if I could have only seen you once more it would not be so hard to us, but my heart aches to see you sometimes. I hope for better brighter days, & when those horrid Yankees find this success does them no good they will be only too glad to let us go.

No fear but that we will give them a warm reception if they come. I expect we will have the Yellow Fever, there are some cases here already. Good bye dear Father, may God forever bless & keep you,

Please say good bye to my brothers for me and for all of us. Good bless you all.