6 May 1862: “The conscript law too which takes so many producers from the country will reduce the crops one half and a scarcity of Bread stares us in the face.”

Posted on 6 May ’12 by Biff Hollingsworth

Item description: Entry, dated 6 May 1862, from the diary of David Schenck (1835-1902). Schenck reflects on recent news including the fall of New Orleans and the Confederate conscription law.

More about David Schenck: David Schenck (1835-1902), son of a doctor and apothecary of Lincolnton, N.C., attended Judge Fearson’s Law School in Rockford, N.C., and received his law license in 1856. He was elected solicitor for Gaston County and set up a practice in Dallas, N.C., before marrying Sallie Wilfong Ramseur in 1859 and moving back to Lincolnton in 1860.

Schenck was a member of the North Carolina Secession and an active participant in determining the conduct of the war. Exempted from army duty because of ill health, he held briefly a position in the Army Commissary Department at Raleigh. He then returned to Lincoln County, where he held the post of receiver under the Sequestration Act for the remainder of the war. In 1866, Schenck applied for a pardon and resumed his law practice. 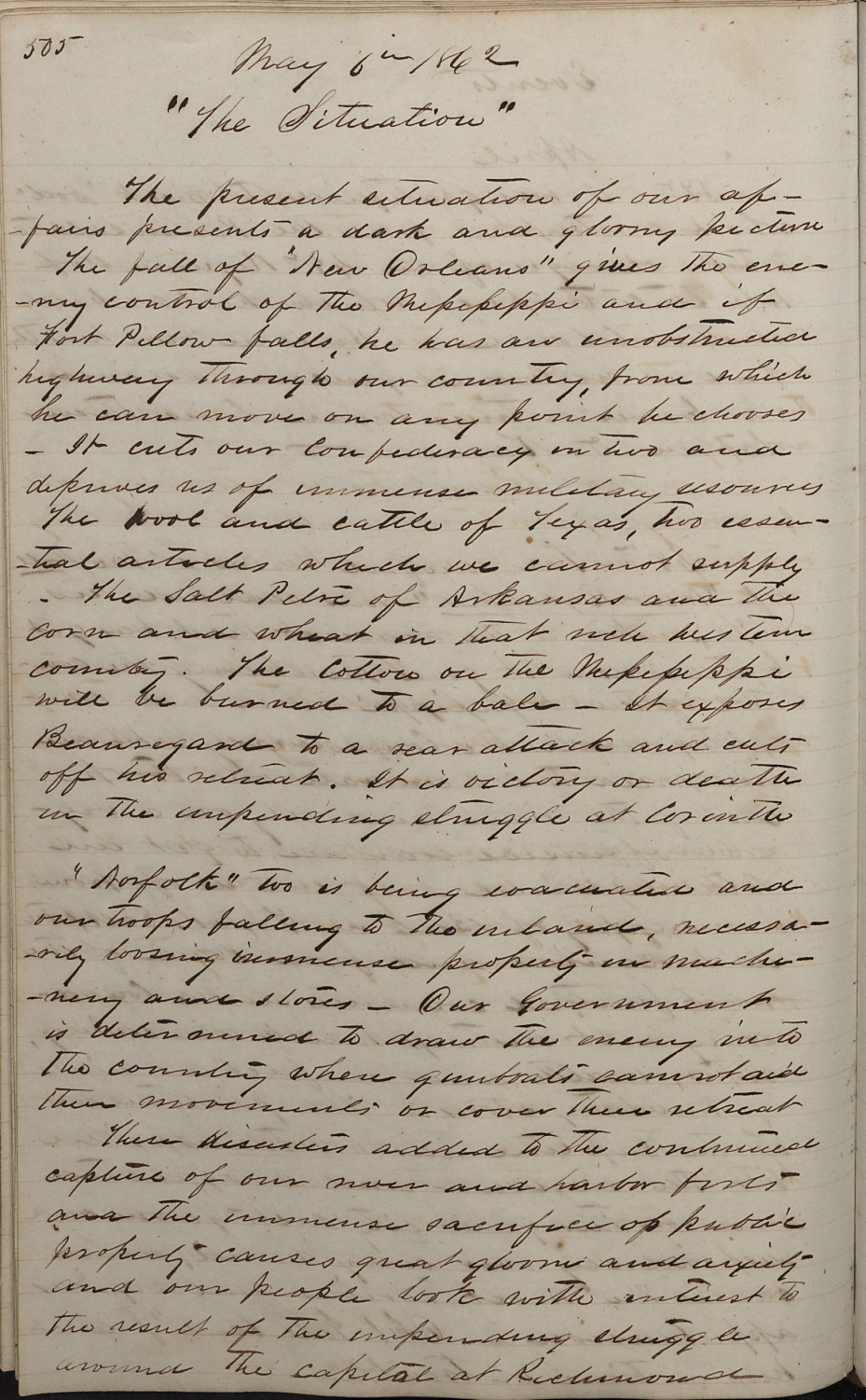 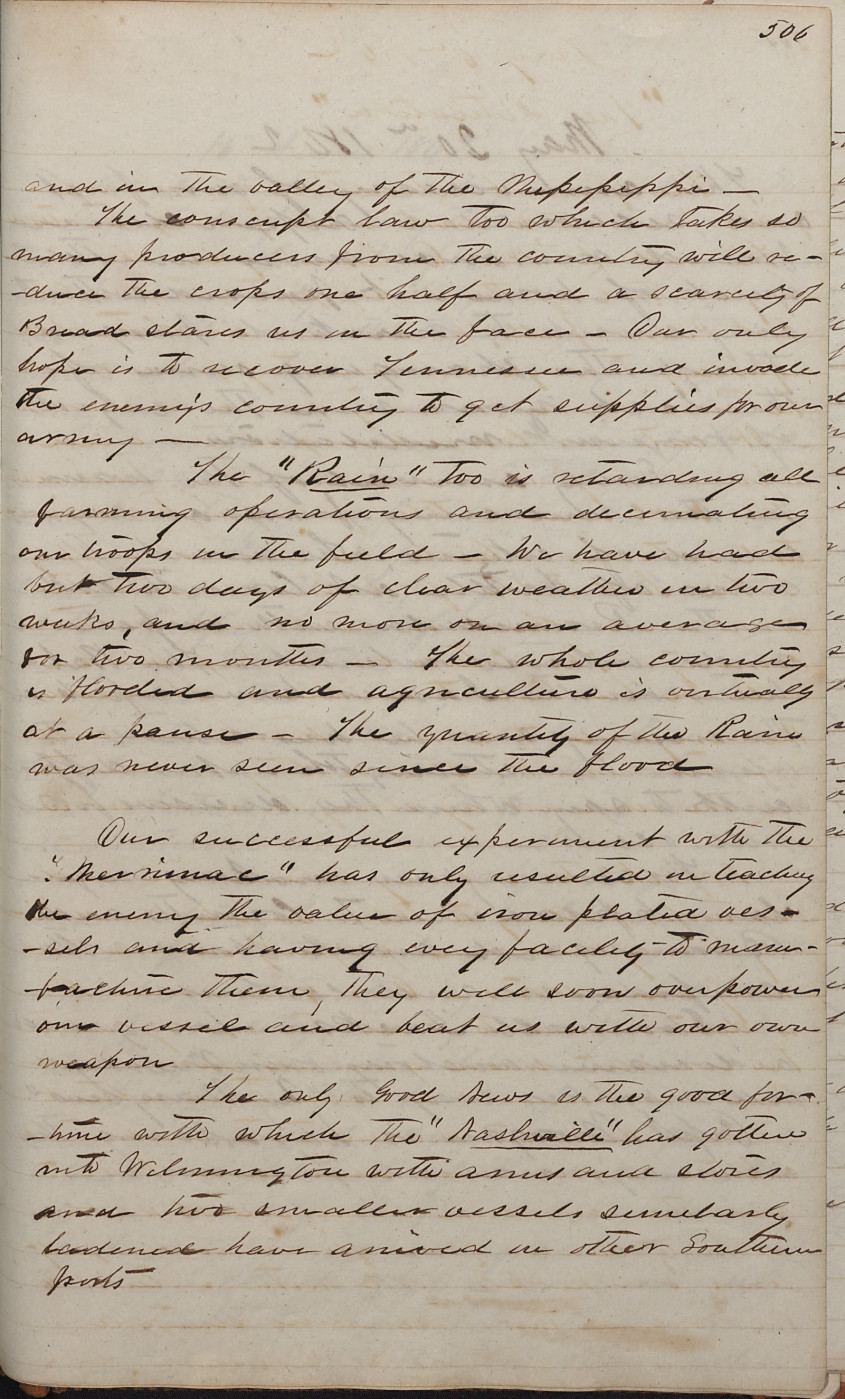 The present situation of our affairs presents a dark and gloomy picture. The fall of “New Orleans” gives the enemy control of the Mississippi and if Fort Pillow falls, he has an unobstructed highway through our country, from which he can move on any point he chooses – It cuts our Confederacy in two and deprives us of immense military resources. The wool and cattle of Texas, two essential articles which we cannot supply. The Salt Petre [saltpeter] of Arkansas and the corn and wheat in that rich western country. The cotton on the Mississippi will be burned to a bale. It exposes Beauregard to a rear attack and cuts off his retreat. It is victory or death in the impending struggle at Corinth.

“Norfolk” too is being evacuated and our troops falling to the inland, necessarily loosing immense property in machinery and stores. Our Government is determined to draw the enemy into the country where gunboats cannot aid their movements or cover their retreat.

These disasters added to the continued capture of our river and harbor forts and the immense sacrifice of public property causes great gloom and anxiety and our people look with interest to the result of the impending struggle around the capital at Richmond and in the valley of the Mississippi.

The conscript law too which takes so many producers from the country will reduce the crops one half and a scarcity of Bread stares us in the face. Our only hope is to recover Tennessee and invade the enemy’s country to get supplies for our army.

The “Rain” too is retarding all farming operations and decimating our troops in the field. We have had but two days of clear weather in two weeks, and no more on an average for two months. The whole country is flooded and agriculture is virtually at a pause. The quantity of the Rain was never seen since the flood.

Our successful experiment with the “Merrimac” has only resulted in teaching the enemy the value of iron plated vessels and having every facility to manufacture them, they will soon overpower our vessel and beat us with our own weapon.

The only Good news is the good fortune with which the “Nashville” has gotten into Wilmington with arms and stores and two smaller vessels similarly ladened have arrived in other Southern ports.