Posted on 11 May ’12 by Biff Hollingsworth

Item description: Letter, 11 May 1862, from Emmett Cole, Union soldier in Company F of the 8th Michigan Infantry Regiment, from Beaufort, S.C., to his sister Celestia. Cole describes camp life, including a musical performance to honor fallen soldiers and a game of “Cricket Ball.” He also mentions reports of the emancipation of slaves in and around South Carolina. 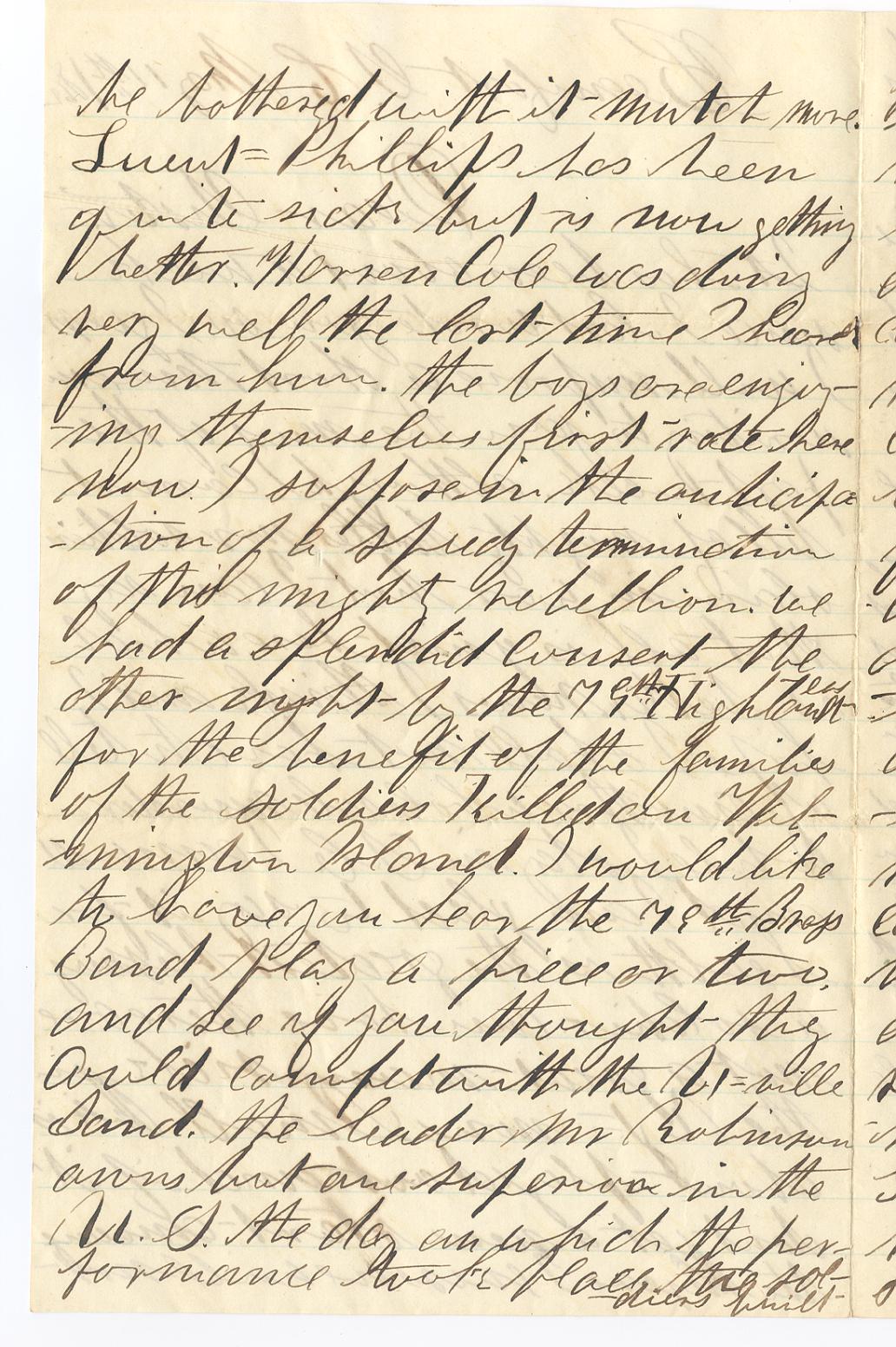 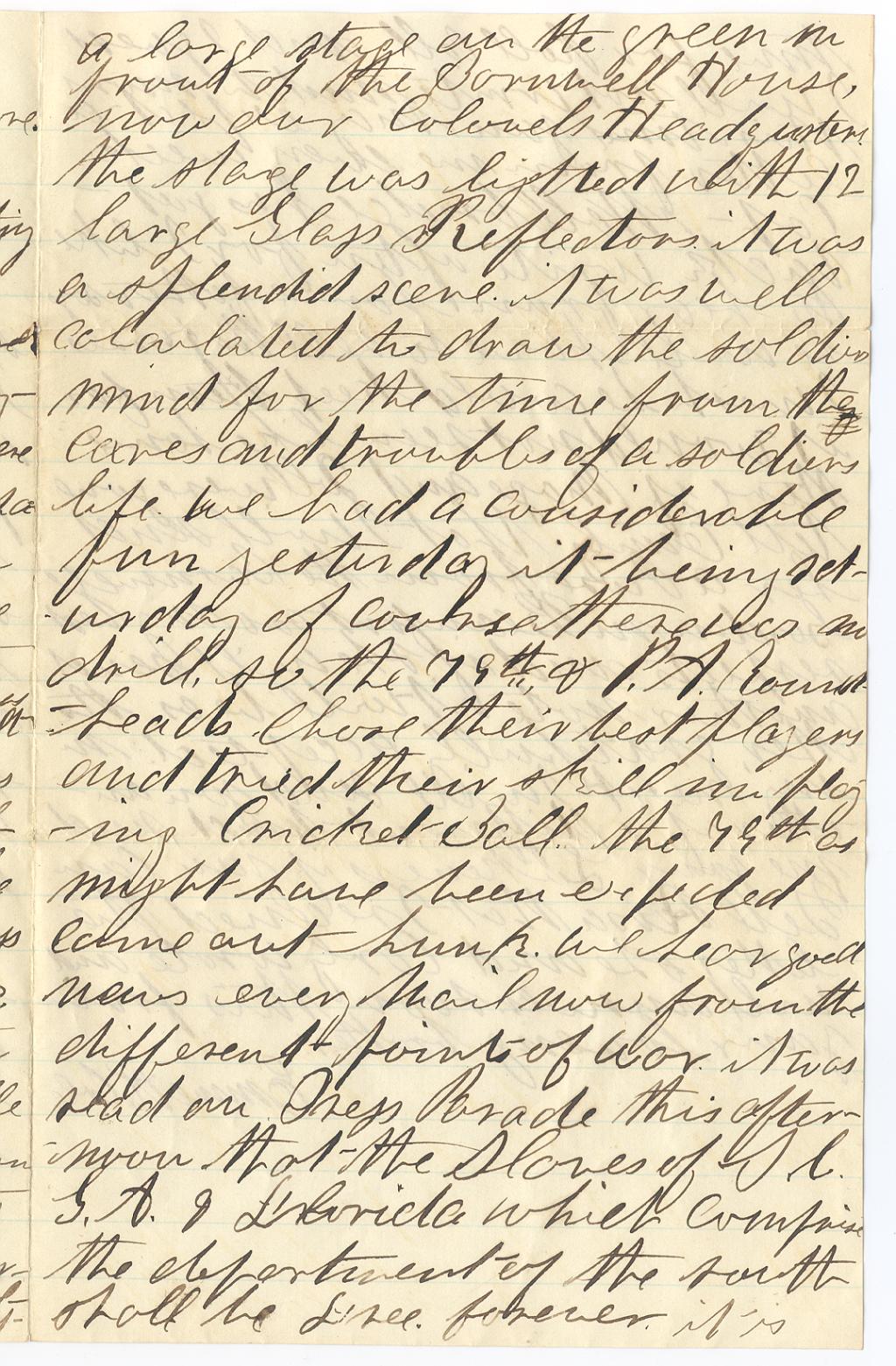 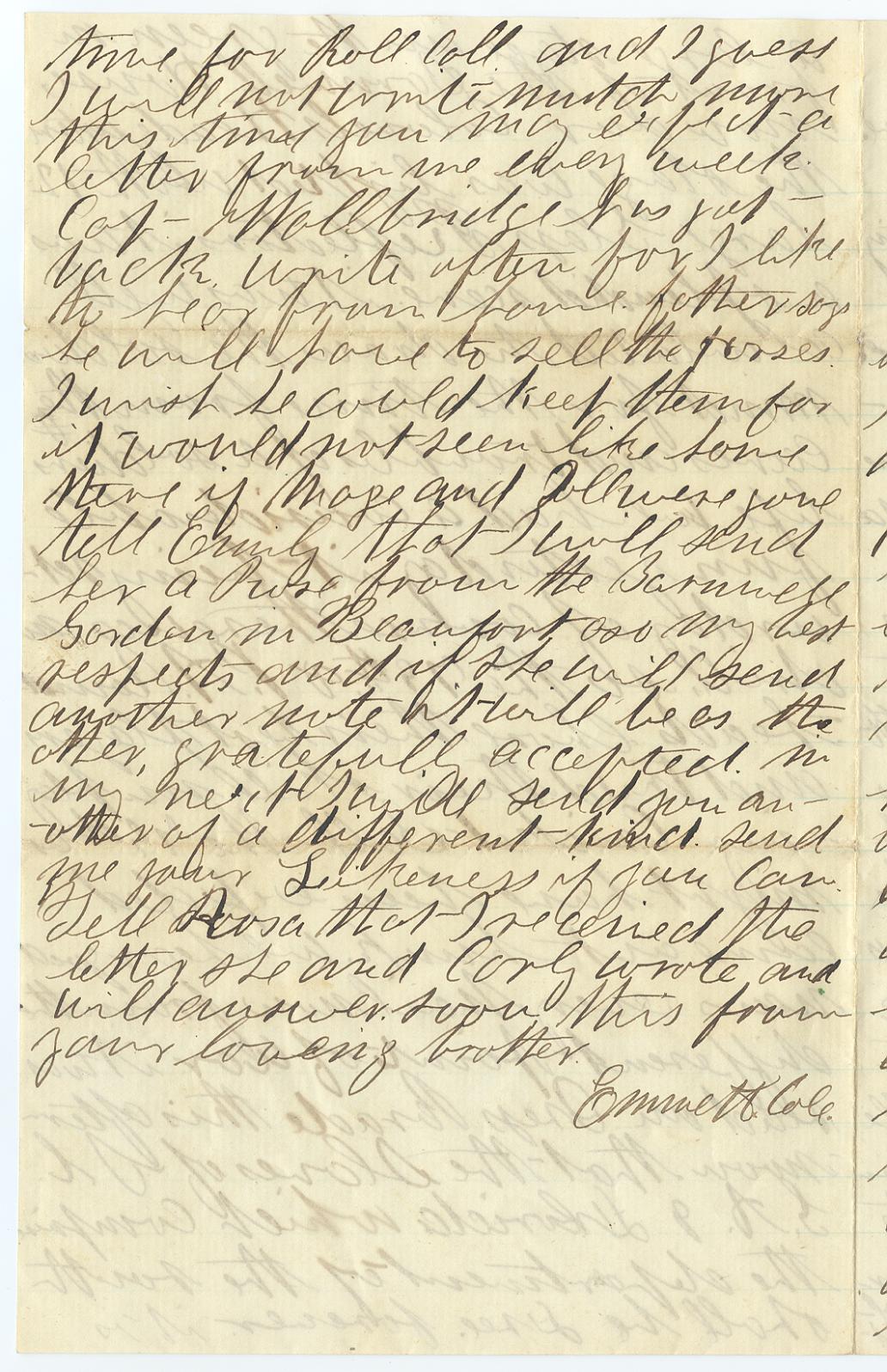 It has been about a week since I last wrote you so I guess I will improve a short time in writing to you the news of the past week. although I cannot tell of mighty battles nor soldiers slain in war, but I can say that ll is quiet here, which is better news I think and I hope I shall not have to tell of another wholesale murder while I stay in S.C. I am well and I am glad to say many sick in the Regt. now. Small Pox is about played out and if it dont get a new start among the men I guess we will not be bothered with it mutch more. Lieut Phillips has been quite sick but is now getting better. Warren Cole was doing very well the last time I heared from him. the boys are enjoying themselves first rate here now. I suppose in the anticipation of a speedy termination of this mighty rebellion. we had a splendid consert the other night by the 79th Highlanders for the benefit of the soldiers killed on Wilmington Island. I would like to have you hear the 79th Brass band play a piece or two, and see if you thought they could compet with the [Vt=ville?] Band. the leader Mr. Robinson owns but one superior in the U.S. the day on which the performance took place the soldiers built a large stage on the green in front of the Barnwell House, now our Colonels Headquarters. the stage was lighted with 12 large Glass Reflectors. it was a splendid scene. it was well calculated to draw the soldiers mind for the time from the cares and troubles of a soldiers life. we had a considerable fun yesterday it being saturday of course there was no drill, so the 79th & P.A. Roundheads chose their best players and tried their skill in playing Cricket Ball. the 79th as might have been expected came out hunk. we hear good news every Mail now from the different points of war. it was read on Dress Parade this afternoon that the slaves of S.C., G.A. & Florida which comprise the department of the south shall be free, forever. it is time for Roll Call and I guess I will not write mutch more this time you may expect a letter from me every week. Cap Wallbridge has got back. write often for I like to hear from home. father says he will have to sell the horses. I wish he could keep them for it would not seem like home there if Maye and Doll were gone tell Emily that I will send her a Rose from the Barnwell Garden in Beaufort also my best respects and if she will send another note it will be as the other, gratefully accepted. in my next I will send you another of a different kind. send me your Likeness if you can. Tell Rosa that I received the letter she and Carly wrote and will answer soon this from your loveing brother.