12 May 1862: “We will certainly know how to appreciate freedom when we have it once more restored.”

Posted on 12 May ’12 by Biff Hollingsworth

Item description: Entry, dated 12 May 1862, from the diary of Kate S. Carney describing the Union occupation of Murfreesboro, Tenn.

More about Kate Carney and her Civil War diary:
Catherine “Kate” Carney (1842-1930) was the daughter of Legrand Carney and Katherine Wells Lytle Carney. Her father Legrand was a successful merchant and landowner in Murfreesboro, Tennessee.

Carney’s diary (chiefy 1859-1862) describes antebellum life in Murfreesboro, Tenn.; travel in the Southeast, Northeast, Midwest, and Canada; schooling in Philadelphia; a stay with her sister in Yazoo County, Miss.; and life in Murfreesboro during the Civil War while the city was under U.S. army occupation. 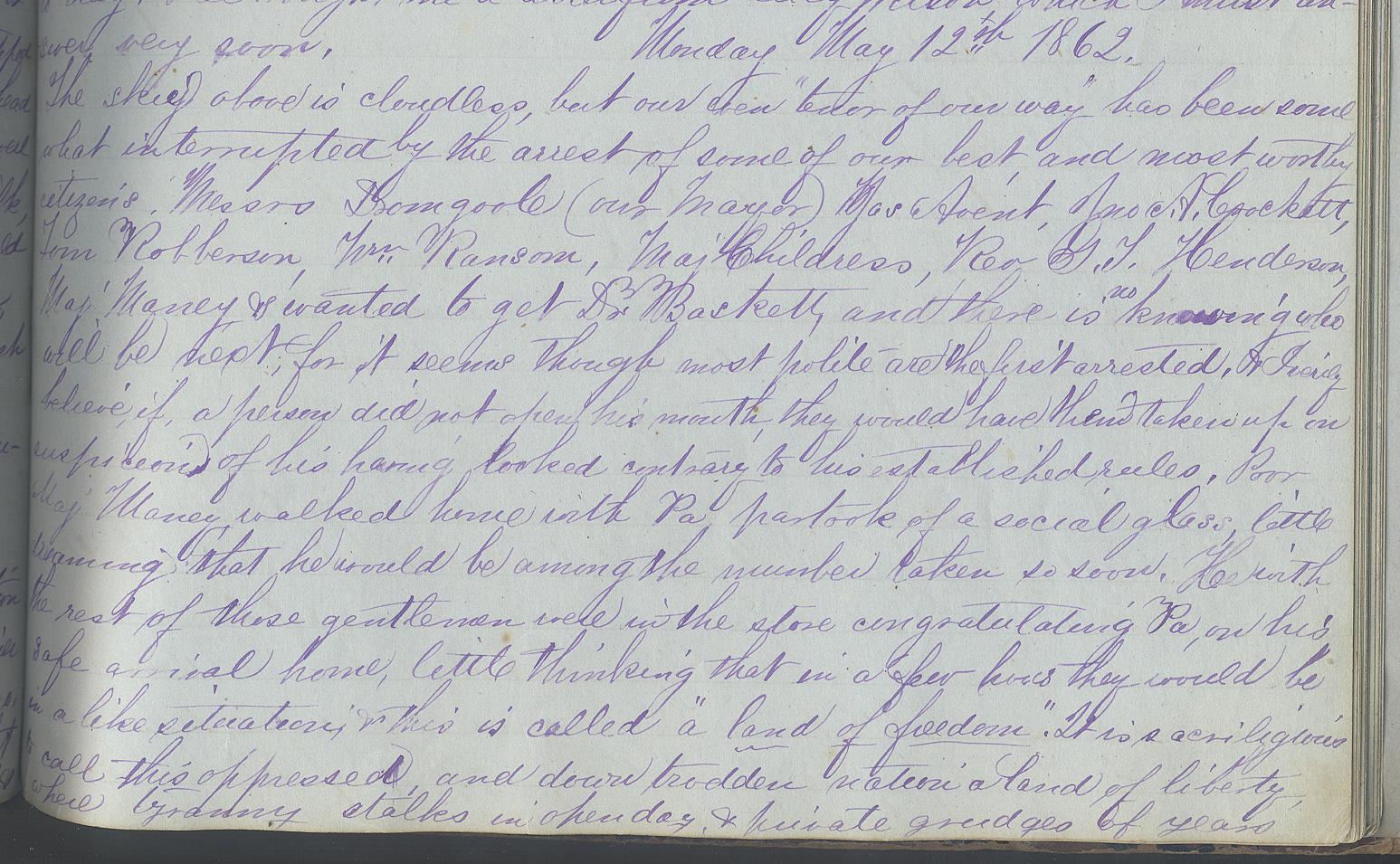 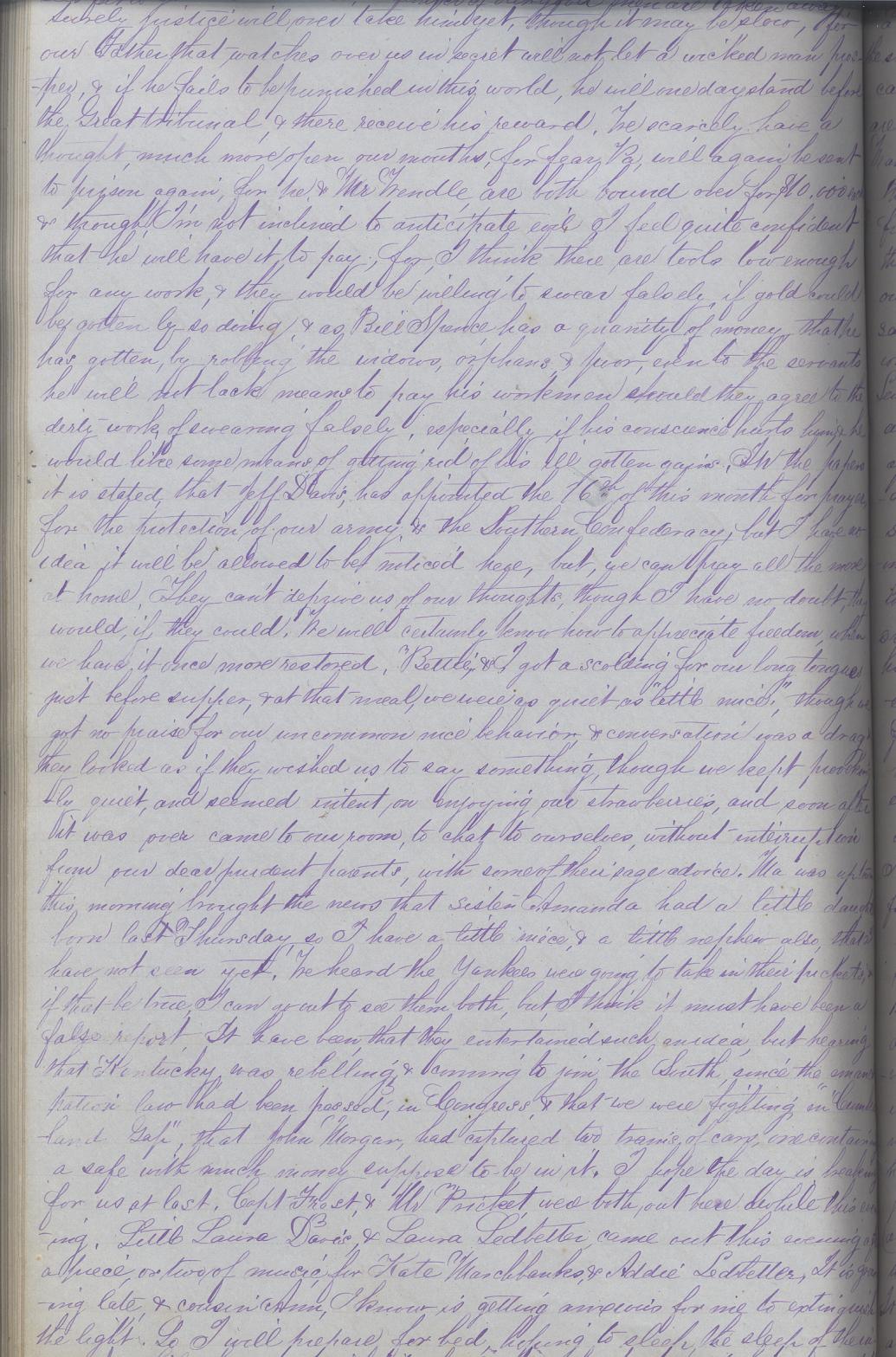 The sky above is cloudless, but our even “tenor of our way” has been some what interrupted by the arrest of some of our best, and most worthy citizens. Messrs. Dromgoole (our Mayor), Jas. Avent, Jno. A. Crockett, Tom Robberson, Wm. Ransom, Maj. Childress, Rev. G. T. Henderson, Maj. Maney, & to get Dr. Baskett, and there is no knowing who will be next, for it seems though most polite are the first arrested, & I verily believe, if a person did not open his mouth, they would have them taken up on suspicion of his having looked contrary to his established rules. Poor Maj. Maney, walked home with Pa, partook of a social class, little dreaming that he would be among the number taken so soon. He with the rest of those gentlemen were in the store congratulating Pa on his safe arrival home, little thinking that in a few hours they would be in a like situation, & this is called “a land of freedom”. It is sacreligious to call this oppress, and down trodden nation a land of liberty, where tyranny stalks in open day, & private grudges of years standing are brought to light, & revenge is considered sweet. It seems strange that when a certain man (for I shall not term him a gentleman) sees fit to go to Nashville, a number of our good men are taken away. Surely justice will over take him yet, though it may be slow, for our Father that watches over us in secret will not let a wicked man prosper, & if he fails to be punished in this world, he will one day stand before the Great Tribunal, & there receive his reward. We scarcely have a thought, much more open our mouths, for fear Pa will again be sent to prison, for he & Mr. Wendel are both bound over $10,000 each, & though I’m not inclined to anticipate evil I feel quite confident that he will have it to pay, for I think there are tools low enough for any work, & they would be willing to swear falsely, if gold could be gotten by so doing, & as Bill Spence has a quantity of money that he has gotten by robbing the widows, orphans, & poor, even to the servants he will not lack means to pay his workman should they agree to do the dirty work of swearing falsely, especially if his conscience hurts him, & he would like some means of getting rid of his ill gotten gains. In the papers it is stated that Jeff Davis has appointed the 16th of this month for prayer, for the protection of our army & the Southern Confederacy, but I have no idea it will be allowed to be noticed here, but we can pray all the more at home. They can’t deprive us of our thoughts, though I have no doubt they would, if they could. We will certainly know how to appreciate freedom when we have it once more restored. Bettie and I got a scolding for our long tongues just before supper, & at that meal we were as quiet as “little mice”, though we got no praise for our uncommon nice behavior, & conversation was a drag & they looked as if they wished us to say something, though we kept provokingly quiet and seemed intent on enjoying our strawberries, and soon after it was over came to our room to chat to ourselves, without interruption from our dear prudent parents with some of their sage advice. Ma was up town this morning, brought the news that Sister Amanda had a little daughter born last Thursday, so I have a little niece, & a little nephew also, that I have not seen yet. We heard the Yankees were going to take in their pickets, if that be true, I can go out to see them both, but I think it must have been a false report. It has been, that they entertained such an idea, but hearing that Kentucky was rebelling & coming to join the South since the emancipation law has been passed in Congress, & that we were fighting in “Cumberland Gap”, that John Morgan had captured two trains of cars, one containing a safe with much money supposed to be in it. I hope the day is breaking for us at last. Capt. Frost & Mr. Pricket were both out here awhile this evening. Little Laura Davis & Laura Ledbetter came out this evening after a piece or two of music for Kate Marchbanks & Addie Ledbetter. It is growing late & Cousin Ann I know is getting anxious for me to extinguish the light. So I will prepare for bed, hoping to sleep, the sleep of the innocent, while the moon with its broad face keeps a good humored watch over me.