Posted on 13 May ’12 by Biff Hollingsworth

Item description: Diary entry, 13 May 1862, describing the Union occupation of Murfreesboro, Tenn., fears of a smallpox outbreak, and a mention of the destruction of the USS Merrimack.

More about Kate Carney and her Civil War diary:
Catherine “Kate” Carney (1842-1930) was the daughter of Legrand Carney and Katherine Wells Lytle Carney. Her father Legrand was a successful merchant and landowner in Murfreesboro, Tennessee.

Carney’s diary (chiefy 1859-1862) describes antebellum life in Murfreesboro, Tenn.; travel in the Southeast, Northeast, Midwest, and Canada; schooling in Philadelphia; a stay with her sister in Yazoo County, Miss.; and life in Murfreesboro during the Civil War while the city was under U.S. army occupation. 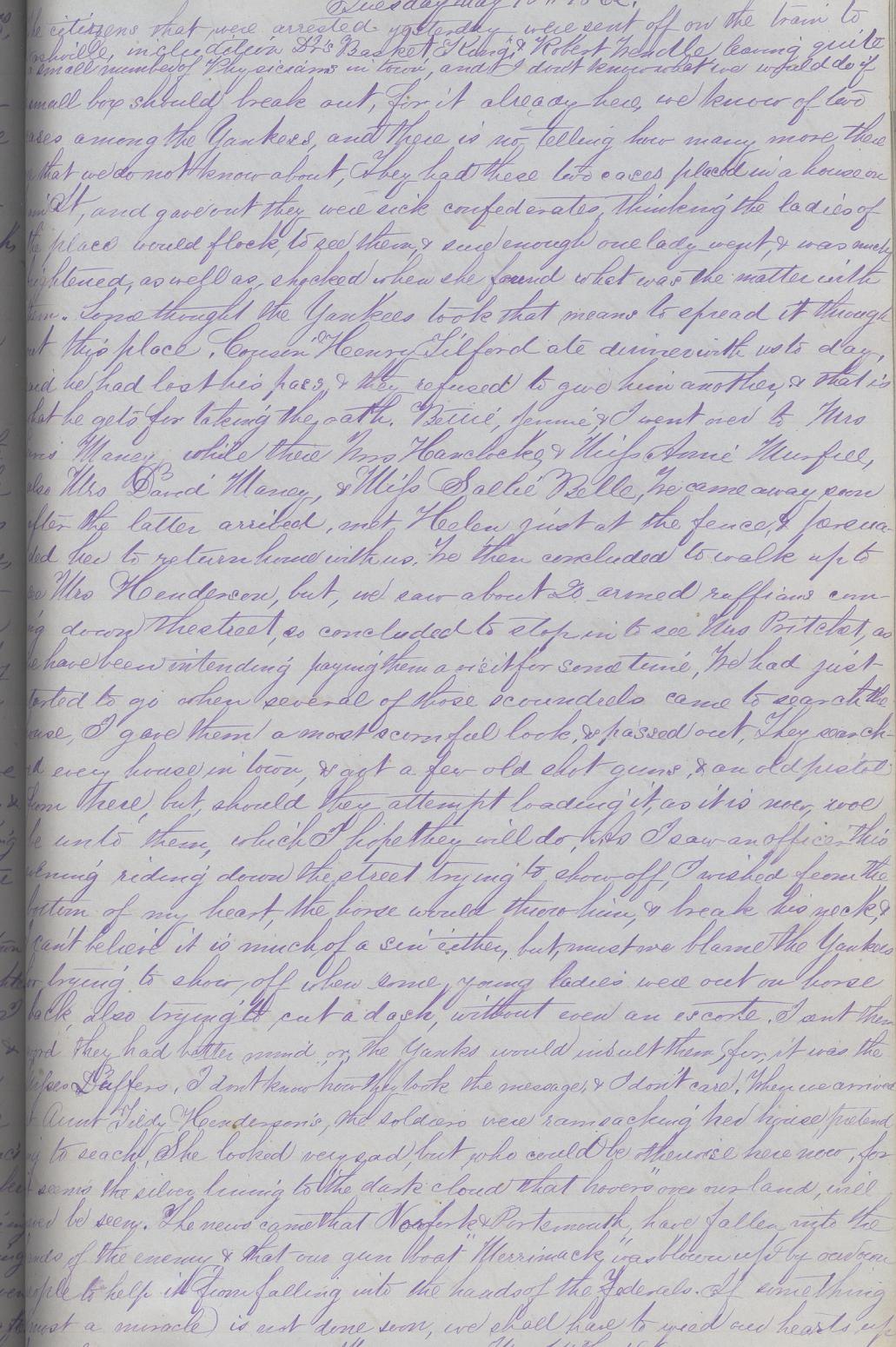 The citizens that were arrested yesterday were sent off on the train to Nashville, including Dr.’s Basket, King, & Robert Wendle, leaving quite a small number of physicians in town, and I don’t know what we would do if the small pox should break out, for it [is] already here, we know of two cases among the Yankees, and there is no telling how many more there are that we do not know about. They had these two cases placed in a house on Main St. and gave out they were sick Confederates, thinking the ladies of the place would flock to see them, & sure enough one lady went & was much frightened, as well as shocked when she found what was the matter with them. Some thought the Yankees took that means to spread it through out this place. Cousin Henry Tilford ate dinner with us today. Said he had lost his pass, & they refused to give him another, & that is what he gets for taking the oath. Bettie, Jennie, & I went over to Mrs. Lewis Maney, while there Mrs. Hancocke & Miss Annie Murfree, also Mrs. David Maney & Miss Sallie Belle. We came away soon after the latter arrived, met Helen just at the fence, & persuaded her to return home with us. We then concluded to walk up to see Mrs. Henderson, but we saw about 20 armed ruffians coming down the street, so we concluded to stop in to see Mrs. Pritchet, as we have been intending paying them a visit for some time. We had just started to go when several of those scoundrels came to search the house, I gave them a most scornful look & passed out. They searched every house in town & got a few old shot guns, & an old pistol from here, but should they attempt loading it as it is now, woe be unto them, which I hope they will do. As I saw an officer this evening riding down the street trying to show off, I wished from the bottom of my heart, the horse would throw him & break his neck, & I can’t believe it is much of a sin either, but, must we blame the Yankees for trying to show off when some young ladies were out on horse back, also trying to cut a dash, without even an escort. I sent them word they had better mind, or the Yanks would insult them, for, it was the Misses Duffers. I don’t know how they took the message, & I don’t care. When we arrived at Aunt Tildy Henderson’s the soldiers were ransacking her house, pretending to search. She looked very sad, but who could be otherwise here now, for it seems the silver lining to “the dark cloud that hovers” over our land will never be seen. The news came that Norfolk & Portsmouth have fallen into the hands of the enemy & that our gun boat “Merrimack” was blown up by our own people to help it from falling into the hands of the Federals. If something (almost a miracle) is not done soon, we shall have to yield our hearts up to despair.