11 June 1862: “The most intelligent men with whom I have conversed lately express the belief that the war will continue but a few more months.”

Posted on 11 Jun ’12 by Biff Hollingsworth 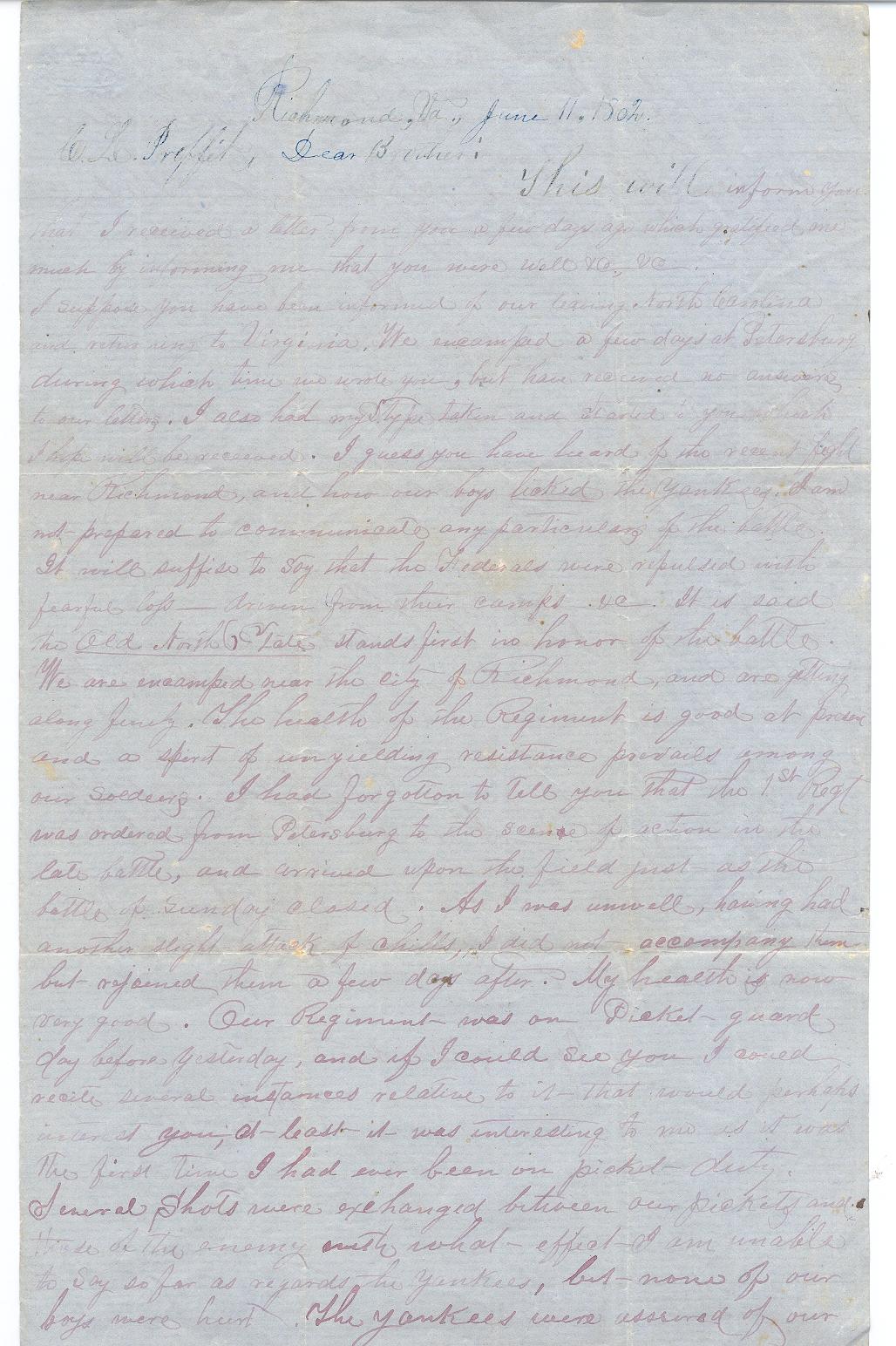 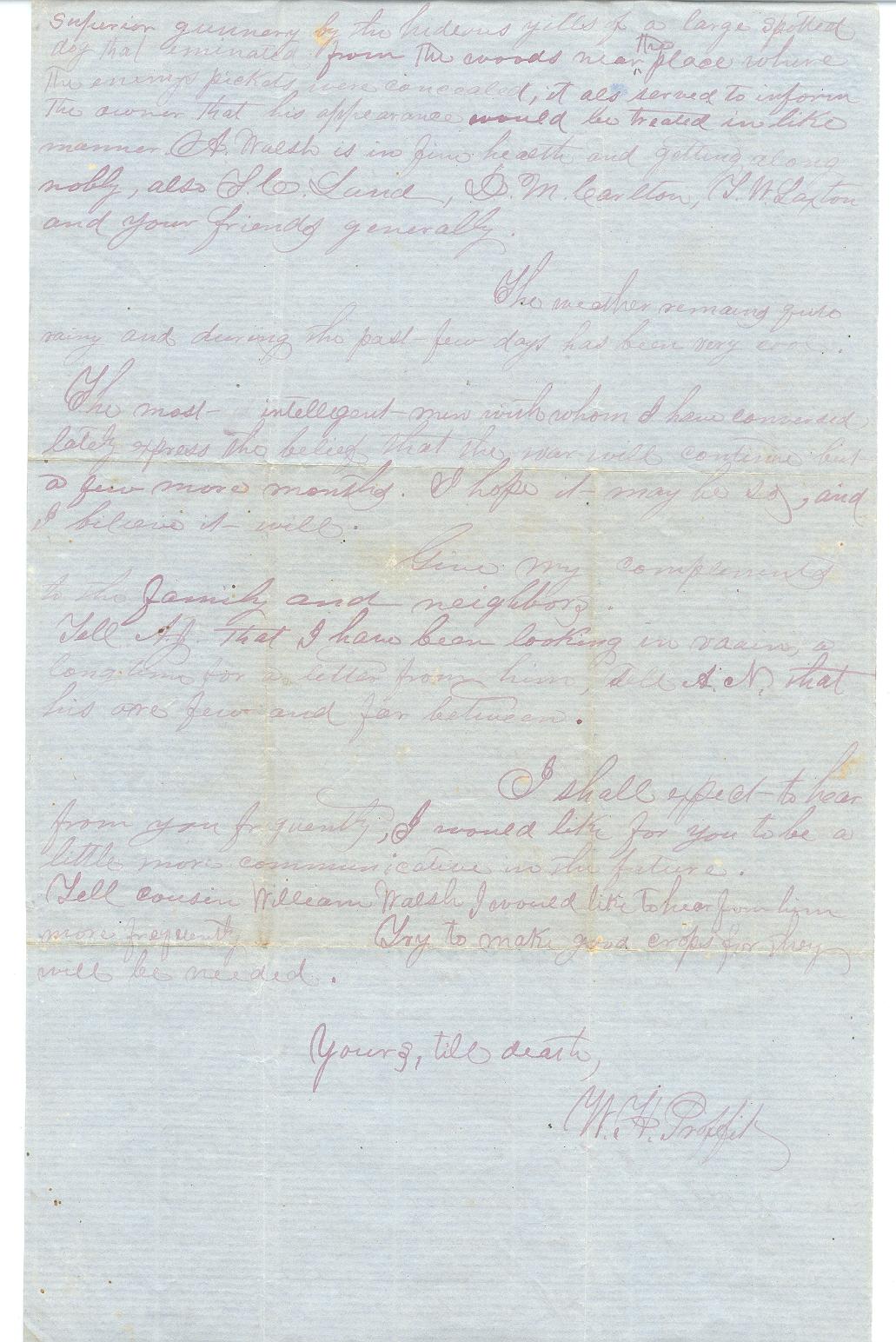 Dear Brother,
This will inform you that I received a letter from you a few days ago which gratified me much by informing me that you were well. I suppose you have been informed of our leaving North Carolina and returning to Virginia. We camped a few days ago in Petersburg during which time we wrote you, but have not received no answer to your letters. I also had my type taken and started to you which I hope will be received. I guess you have heard of the recent fight near Richmond, and how our boys licked the yankees. I am not prepared to communicate any particulars of the battle. It will suffice to say that the federals were repulsed with fearful loss – driven from their camps etc. it is said the Old North State stands first in honor of the battle.

We are encamped near the city of Richmond, and are getting along finely. The health of the Regiment is good at present and the spirit of unyielding resistance prevails among our soldiers. I had forgotten to tell you that the 1st Regt was ordered from Petersburg to the scene of action in the late battle, and arrived upon the field just as the battle of Sunday closed. As i was unwell, having another slight attack of the chills, I did not accompany them but rejoined them a few days after. My health now is very good.

Our regiment was on picket guard day before yesterday, and if I could see you I would recite several instances relative to it that would perhaps interest you, or at least it was interesting to me as it was the first time I had ever been on picket duty. Several shots were engaged between our pickets and that of the enemy, with what effect, I am unable to say so far as in regards to the Yankees, but none of our boys were hurt. The Yankees were scared of our superior gunnery and by the hideous yells of a large spotted dog that eminated from the woods near the place where the enemy pickets were concealed. It also served to inform the owner that his appearance would be treated in like manner.

A. Walsh is in fine health and getting along nobly, also T.C. Land, D.M. Carlton, L.W. Laxton, and your friends generally. The weather remains quite rainy and during the past few days has been very cool. The most intelligent men with whom I have conversed lately express the belief that the war will continue but a few more months. I hope it will be so, I believe it will.

Give my compliments to the family and neighbors. Tell A.J. [his brother Andrew J. Proffit] that I have been looking, in vain, for along time for a letter from him. Tell A.N. [his brother Alfred N. Proffit] that his are few and far between. I shall expect to hear from you frequently. I would like for you to be a little more communicative in the future. Tell cousin William Walsh I would like to hear from him more frequently. Try to make good crops as they will be needed.

Yours till death,
W.H. Proffit

This entry was posted in Southern Historical Collection and tagged Proffit family. Bookmark the permalink.