6 July 1862: “It seems strange but nevertheless true that most of the boys from our neighborhood have either been killed wounded or died of sickness.” 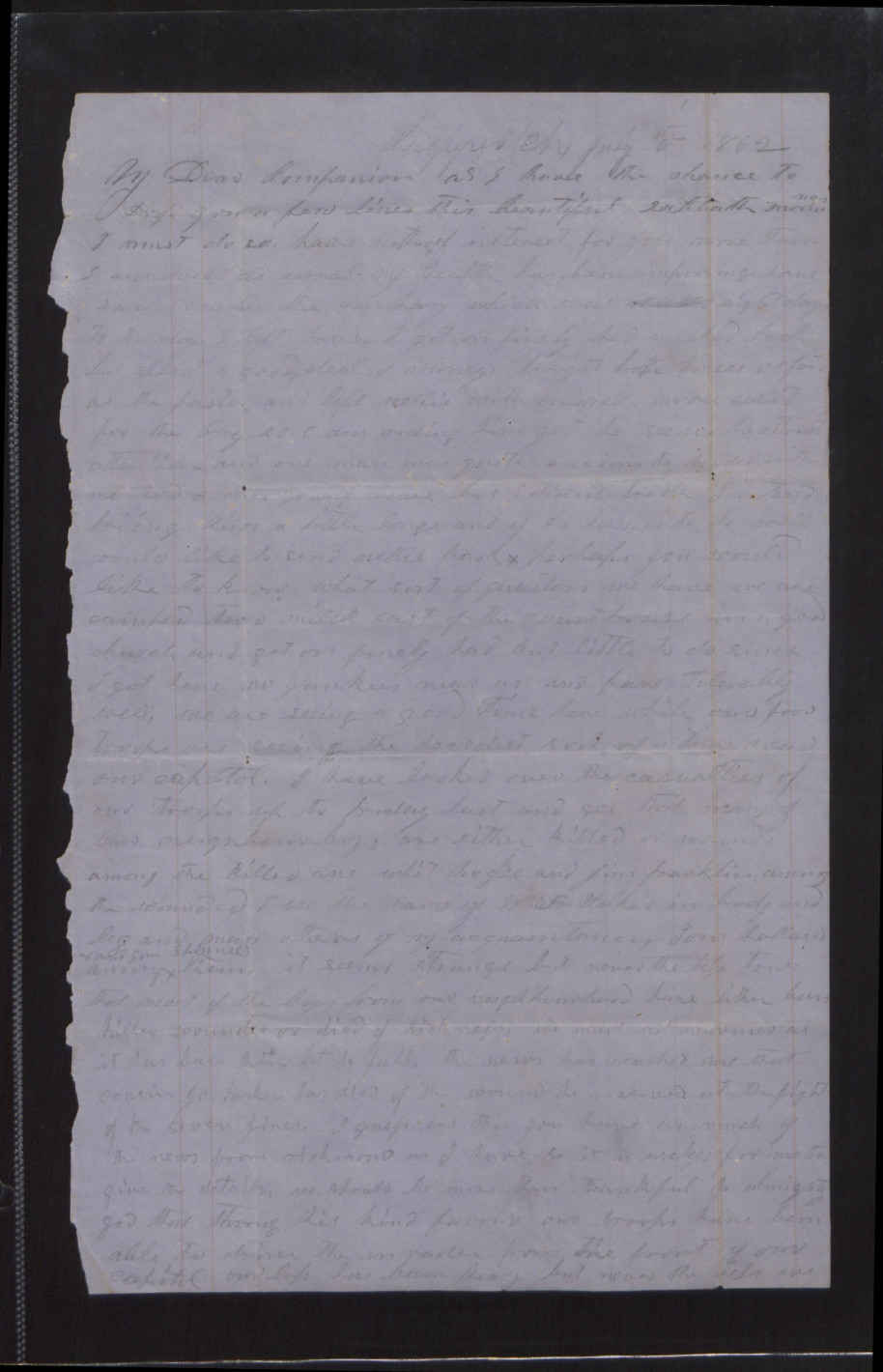 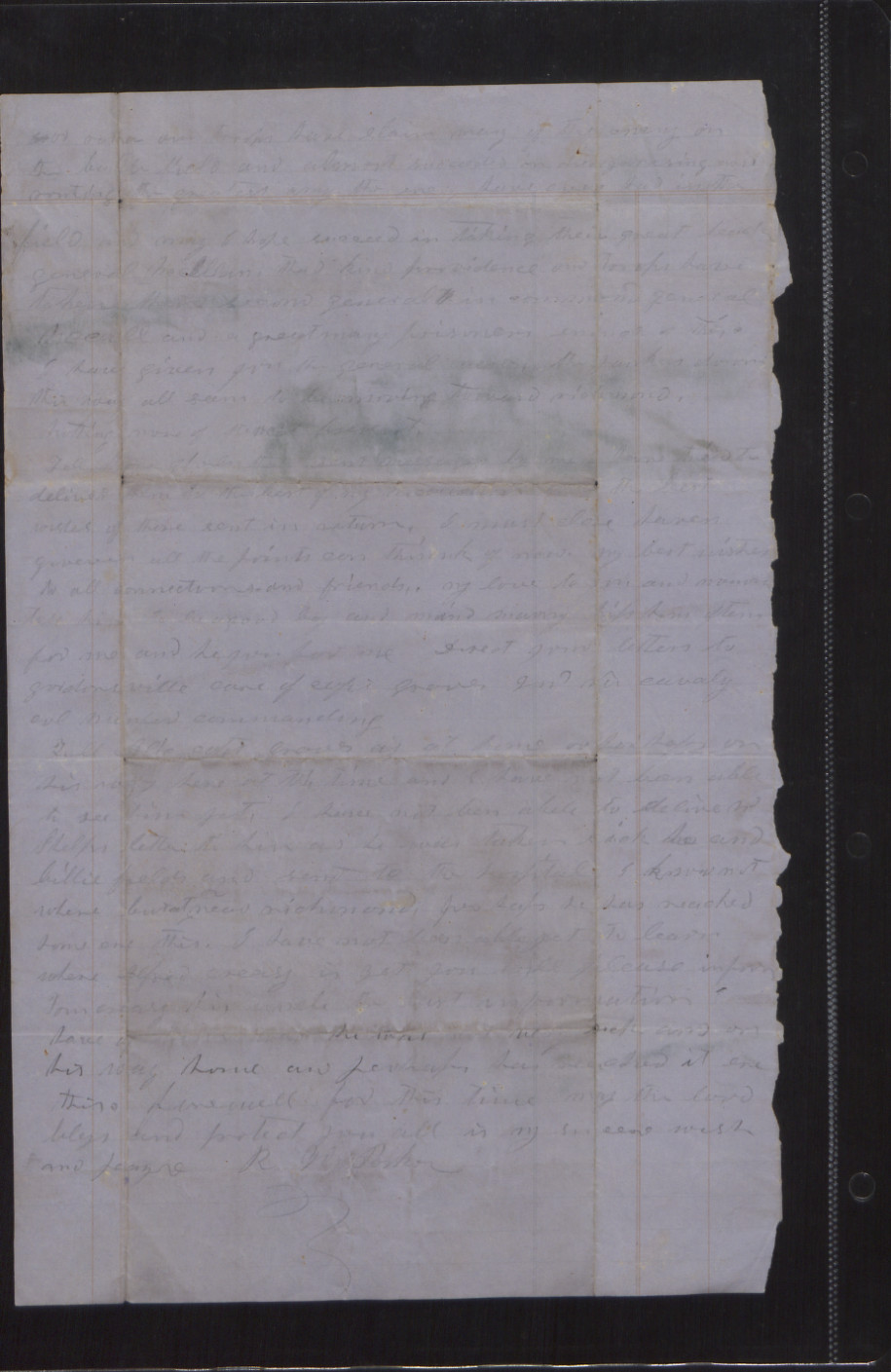 As I have the chance to drop you a few lines this beautiful Sabbath morning, I must do so. Have nothing of interest for you more than I am well as usual. My health has been improving some since I reached the company, which was eight days to the day I left home. I got on finely, had no bad luck, but spent a good deal of money. Brought both horses as far as the pasture and left Nellie with Murrell. No one called for the bay so I am riding yet. He seems to attract attention, and one man was quite anxious to trade with me. Had a nice young horse, but I didn’t trade. I intend trying him a little longer and, if he seems to do well, would like to send Nellie back.

Perhaps you would like to know what sort of quarters we have. We are camped two miles east of the Courthouse in a good church and get on finely. Had but little to do since I got here, no Yankees near us and fare tolerably well. We are seeing a good time here while our poor troops are seeing the heaviest sort of time near our capitol. I have looked over the casualties of our troops up to Friday last and see that many of our neighbor boys are either killed or wounded. Among the killed are Whit […] and Jim Franklin. Among the wounded I see the name of Wm. A. Walker in body and leg, and many others of my acquaintance, Tom Holland and Sam Murrill among them. It seems strange but nevertheless true that most of the boys from our neighborhood have either been killed wounded or died of sickness. We must not murmur, as it has been their lot to fall. The news has reached me that Cousin Jo Parker has died of the wound he received as the fight of the Seven Pines. I guess ere this you have as much news from Richmond as I have, so it is useless for me to give the details. We should be more than thankful to almighty God that, through His kind favor, our troops have been able to drive the invader from the front of our capitol. Our loss has been heavy, but nevertheless we, or rather our troops, have slain many of the enemy on the battlefield, and almost succeeded in disorganizing and routing the greatest army the enemy have ever had in the field, and may, I hope, succeed in taking their great leader, General McClellan. That kind Providence and troops have taken their second general in command, General McCall, and a great many prisoners. Enough of this. I have given you the general news. The Yankees down this way all seem to be moving toward Richmond. Nothing more of the war at present.

Tell […] send messages by me. I have tried to deliver them to the best of my […] the best wishes of those sent in return. I must close, having given all the points can think of now. My best wishes to all connections and friends. My love to you and Moorman. Tell him to be a good boy and mind Marmy. Kiss him often for me, and he you for me. Direct your letters to Gordonsville, care of Capt Graves, 2nd Va. Calvary, Col. Munford commanding.

Tell Alick Capt. Graves is at home or perhaps on his way here at this time, and I have not been able to see him yet. I have not been able to deliver Mr. Phelps’ letter to him, as he was taken sick and Billie Fields and sent to the hospital. I know not where, but at or near Richmond. Perhaps he has reached home ere this. I have not been able yet to learn where Alfred Creasy is, yet you will please inform Tom Creasy, his uncle, the last information I have of […] very sick and on his way home and perhaps has reached it ere this. Farewell for this time. May the Lord bless and protect you all is my sincere wish and prayer.