9 July 1862: “. . . the spot of land he now controls is a little hotter than tophet, and is enough to roast and broil every sinner in the Federal Army.” 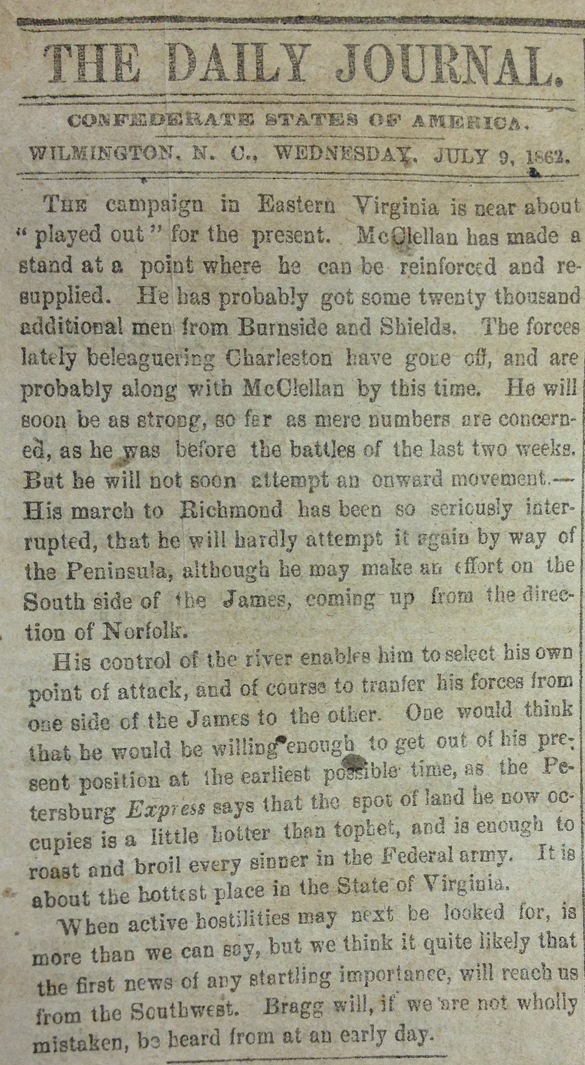 The campaign in Eastern Virginia is near about
“played out” for the present.  McClellan has made a
stand at a point where he can be reinforced and re-
supplied.  He has probably got some twenty thousand
additional men from Burnside and Shields.  The forces
lately beleaguering Charleston have gone off, and are
probably along with McClellan by this time.  He will
soon be as strong, so far as mere numbers are concern-
ed, as he was before the battles of the last two weeks.
But he will not soon attempt an onward movement.—
His march to Richmond has been so seriously inter-
rupted, that he will hardly attempt it again by way of
the Peninsula, although he may make an effort on the
South side of the James, coming up from the direc-
tion of Norfolk.

His control of the river enables him to select his own
point of attack, and of course to transfer his forces from
one side of the James to the other,  One would think
that he would be willing enough to get out of his pre-
sent position at the earliest possible time, as the Pe-
tersburg Express says that the spot of land he now oc-
cupies is a little hotter than tophet, and is enough to
roast and broil every sinner in the Federal army.  It is
about the hottest place in the State of Virginia.

When active hostilities may next be looked for, is
more than we can say, but we think it quite likely that
the first news of any startling importance , will reach us
from the Southwest.  Bragg will, if we are not wholly
mistaken, be heard from at an early day.