13 July 1862: “Noble Vicksburg, I am proud of her, she still holds out, though the large Yankee fleet before the city is constantly bombarding her”

Item description: From the diary of Sarah Lois Wadley, 13 July 1862. In this entry, Wadley talks about the battle of Vicksburg and about hearing reports of formerly enslaved African Americans in Union camps that want to return to their masters. 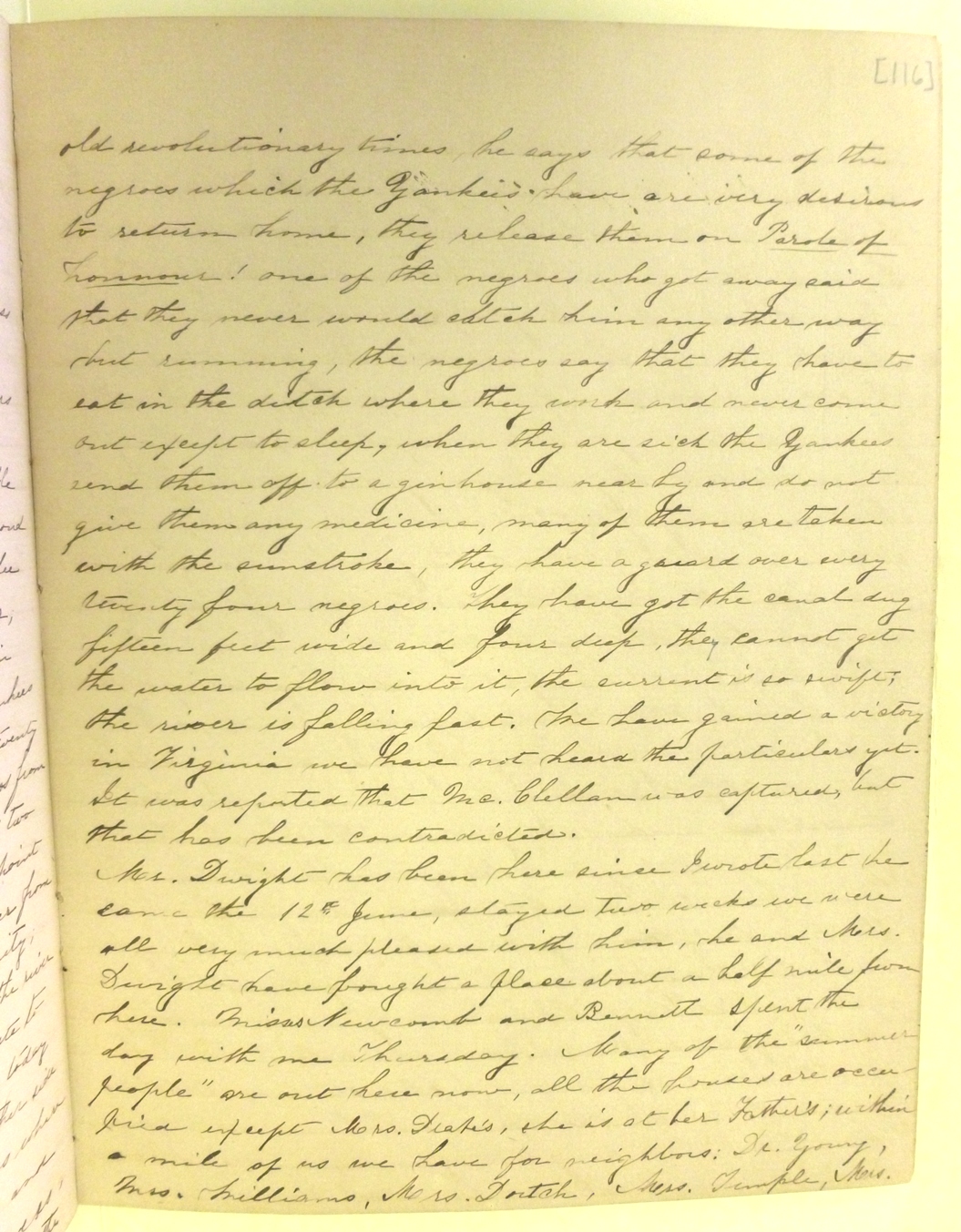 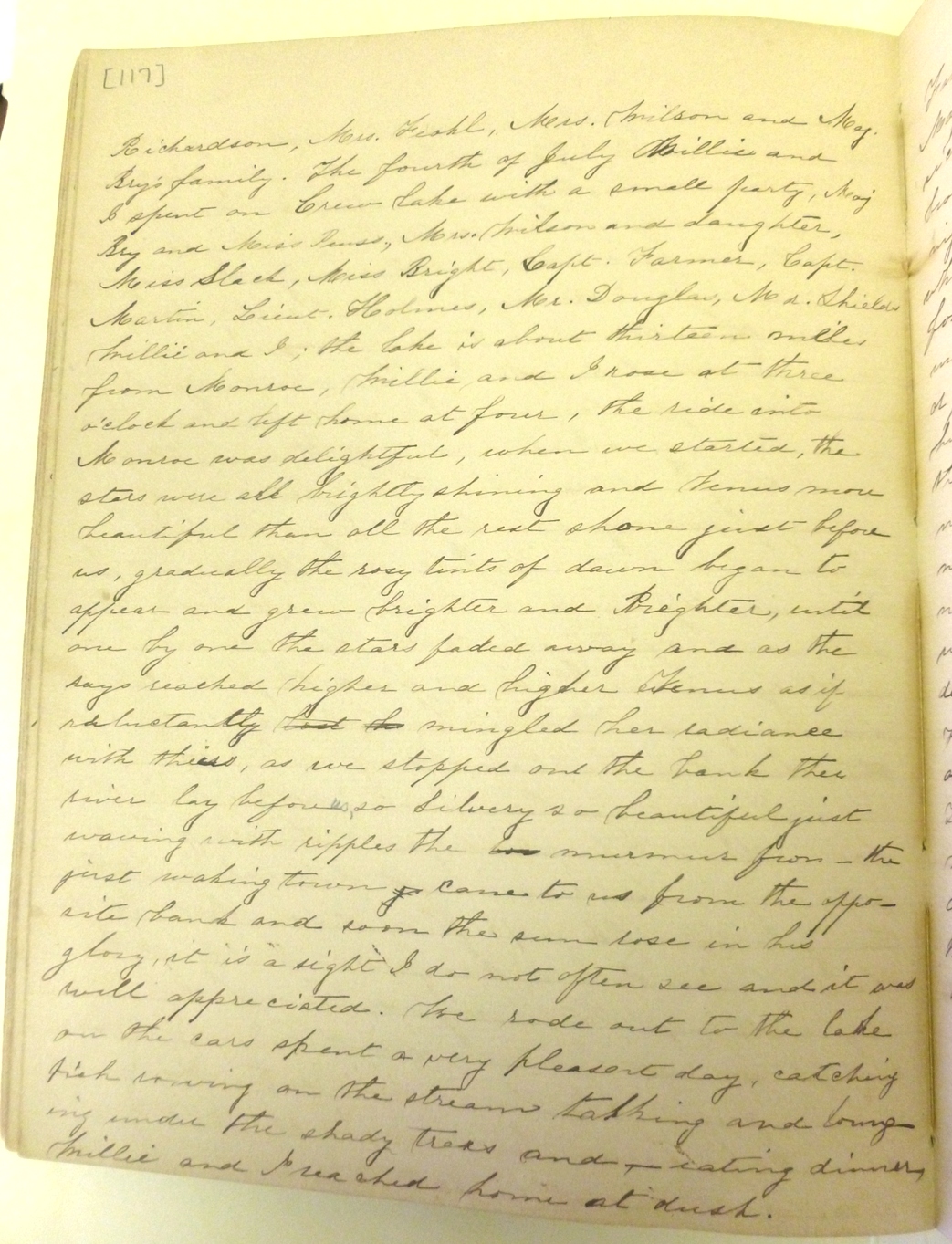 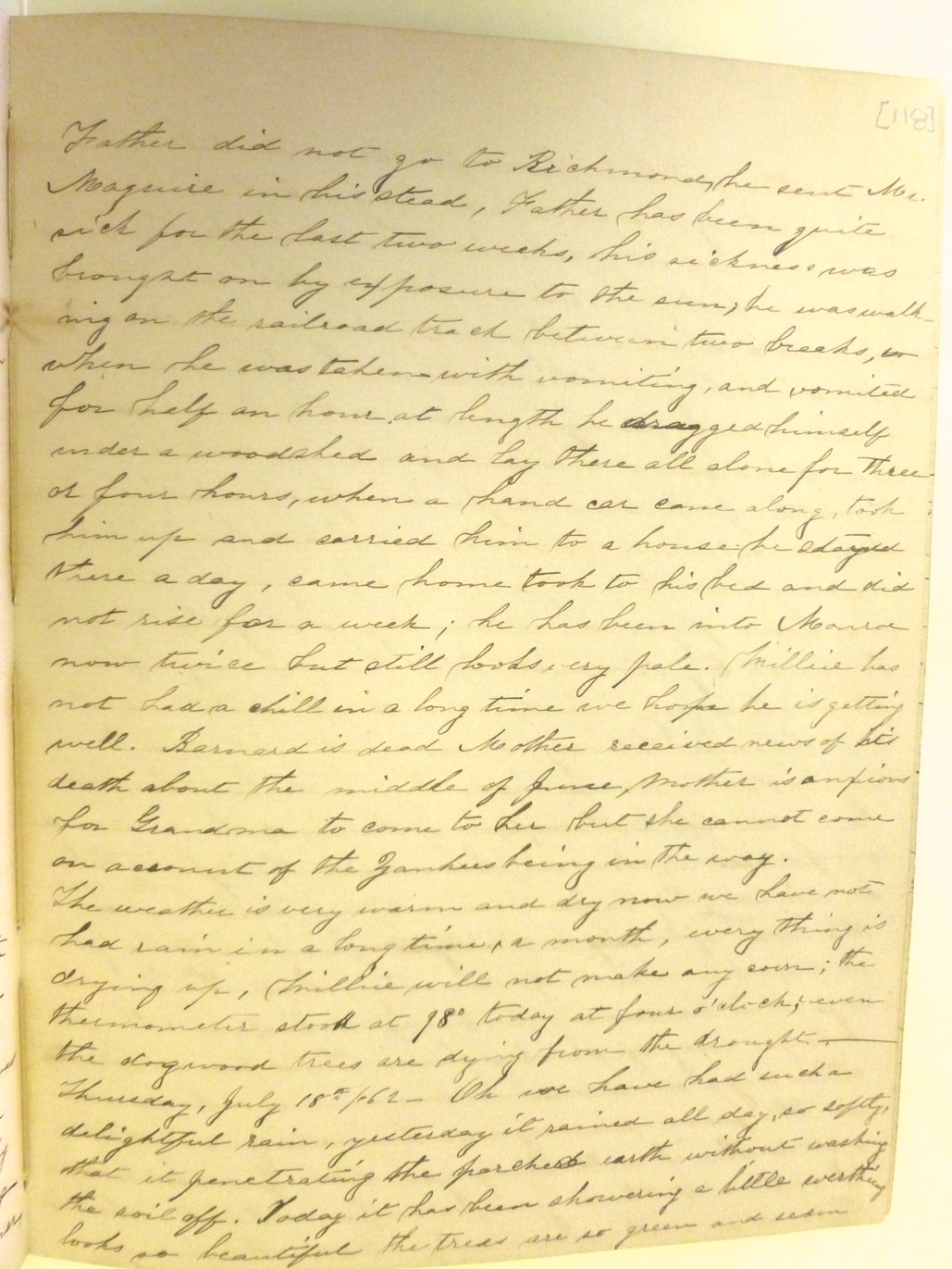 A month since I have opened my journal book! as I look back upon it, it seems an age, though the days and weeks pass as a dream; the times are feverish, and often my heart burns with anxiety and sympathy for our soldiers, our noble soldiers, yes I will say noble, for erring and violent as they often are, yet how many noble hearts are among them! Noble Vicksburg, I am proud of her, she still holds out, though the large Yankee fleet before the city is constantly bombarding her. Many of the buildings are injured and some in ruins, the Court house is still untouched. The Yankees have landed at De Soto and penetrated ten or twenty miles into the interior, they have seized the negroes from many plantations along the river, have about two thousand at work cutting a canal across the point opposite Vicksburg so as to draw off the river from that noble town, and thus ruin her prosperity. Their gunboats, too, want a safe passage up the river, and even their gunboats feel a slight distaste to passing Vicksburg.

There was a youth here today who carries the mail from here to the other side of the river, he goes on horseback, crosses when he can find the river free from Yankees, and changes his route according to circumstances, his recital of his adventures made me think of the old revolutionary times, he says that some of the negroes which the Yankees have, are very desirous to return home, they release them on Parole of honnour! one of the negroes who got away said that they never would catch him any other way but running, the negroes say that they have to eat in the ditch where they work and never come out except to sleep, when they are sick the Yankees send them off to a ginhouse near by and do not give them any medicine, many of them are taken with the sunstroke, they have a guard over every twenty four negroes. They have got the canal dug fifteen feet wide, and four feet deep, they cannot get the water to flow into it, the current is so swift; the river is falling fast. We have gained a victory in Virginia, we have not heard the particulars yet. It was reported that McClellan was captured, but that has been contradicted.

Mr. Dwight has been here since I wrote last, he came the 12th June, stayed two weeks, we were all very much pleased with him, he and Mrs. Dwight have bought a place about a half mile from here.

Misses Newcomb and Bennett spent the day with me Thursday. Many of the “summer people” are out here now, all the houses are occupied except Mrs. Drake’s, she is at her Father’s; within a mile of us, we have for neighbors, Dr. Young, Mrs. Williams, Mrs. Dortch, Mrs. Temple, Mrs. Richardson, Mrs. Fe ohl, Mrs. Wilson and Major Bry’s family.

The fourth of July Willie and I spent on Crew lake with a small party, Maj. Bry and Miss Puss, Mrs. Wilson and daughter, Miss Black, Miss Bright, Capt. Former, Capt. Martin, Lieut. Holmes, Mr. Douglas, Mr. Shields, Willie and I. The lake is about thirteen miles from Monroe, Willie and I rose at three o’clock and left home at four, the ride into Monroe was delightful, when we started the stars were all brightly shining, and Venus more beautiful than all the rest shone just before us, gradually the rosy tints of dawn began to appear, and grew brighter and brighter, until one by one the stars faded away, and as the rays reached higher and higher, Venus, as if reluctantly, mingled her radiance with theirs, as we stopped on the bank the river lay before us, so silvery, so beautiful, just waving with ripples, the murmur from the just waking town came to us from the opposite bank, and soon the sun rose in his glory, it is a sight I do not often see and it was well appreciated.

We rode out to the lake on the cars, spent a very pleasant day, catching fish, rowing on the stream, talking and lounging under the shady trees and,–eating dinner.

Willie and I reached home at dusk.

Father did not go to Richmond, he sent Mr. Maguire in his stead, Father has been quite sick for the last two weeks, his sickness was brought on by exposure to the sun, he was walking on the railroad track between two breaks, when he was taken with vomiting, and vomited for half an hour. At length he dragged himself under a woodshed, and lay there all alone for three or four hours, when a hand car came along, took him up and carried him to a house. He stayed there a day, came home, took to his bed and did not rise for a week; he has been into Monroe now twice, but still looks very pale.

Willie has not had a chill in a long time, we hope he is getting well. Bernard is dead, Mother received news of his death about the middle of June, Mother is anxious for Grandma to come to her, but she cannot come on account of the Yankees being in the way.

The weather is very warm and dry now, we have not had rain in a long time, a month, every thing is drying up. Willie will not make any corn; the thermometer stood at 98° today at four o’clock; even the dogwood trees are dying from the drought.–