30 July 1862: “…so the wise Dr. concluded to saw the poor boys leg off a third time above the knee which caused his death.”

Posted on 30 Jul ’12 by Biff Hollingsworth 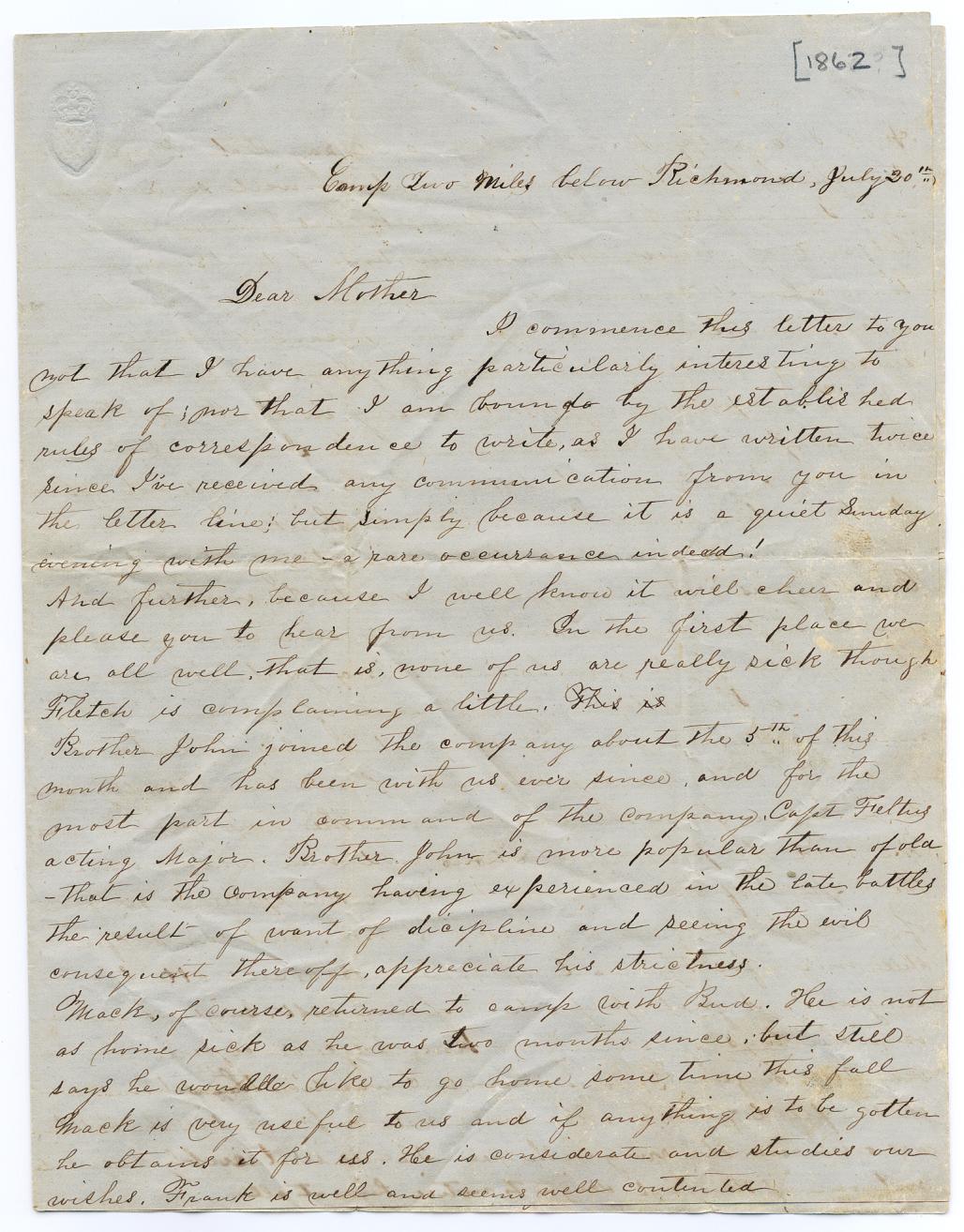 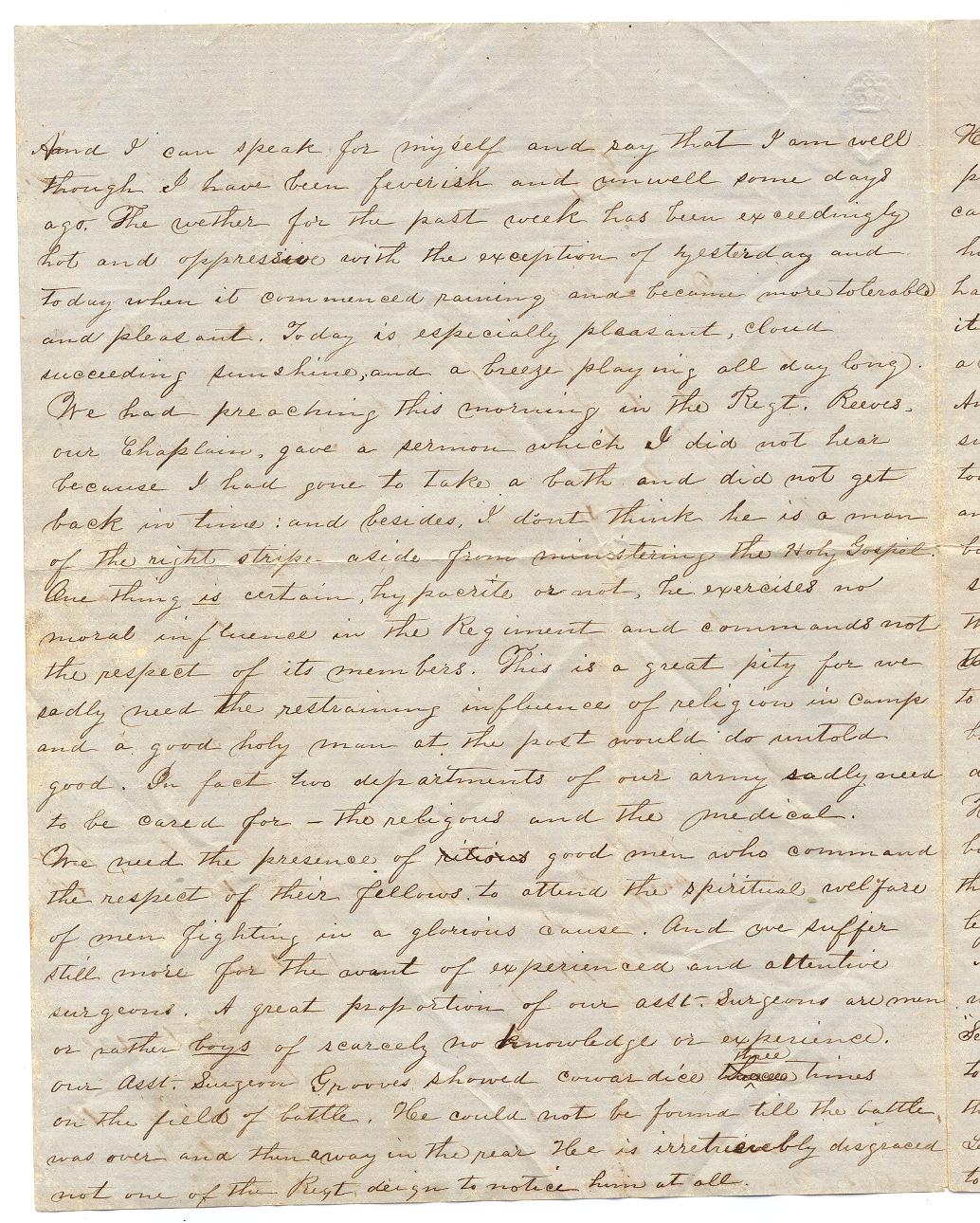 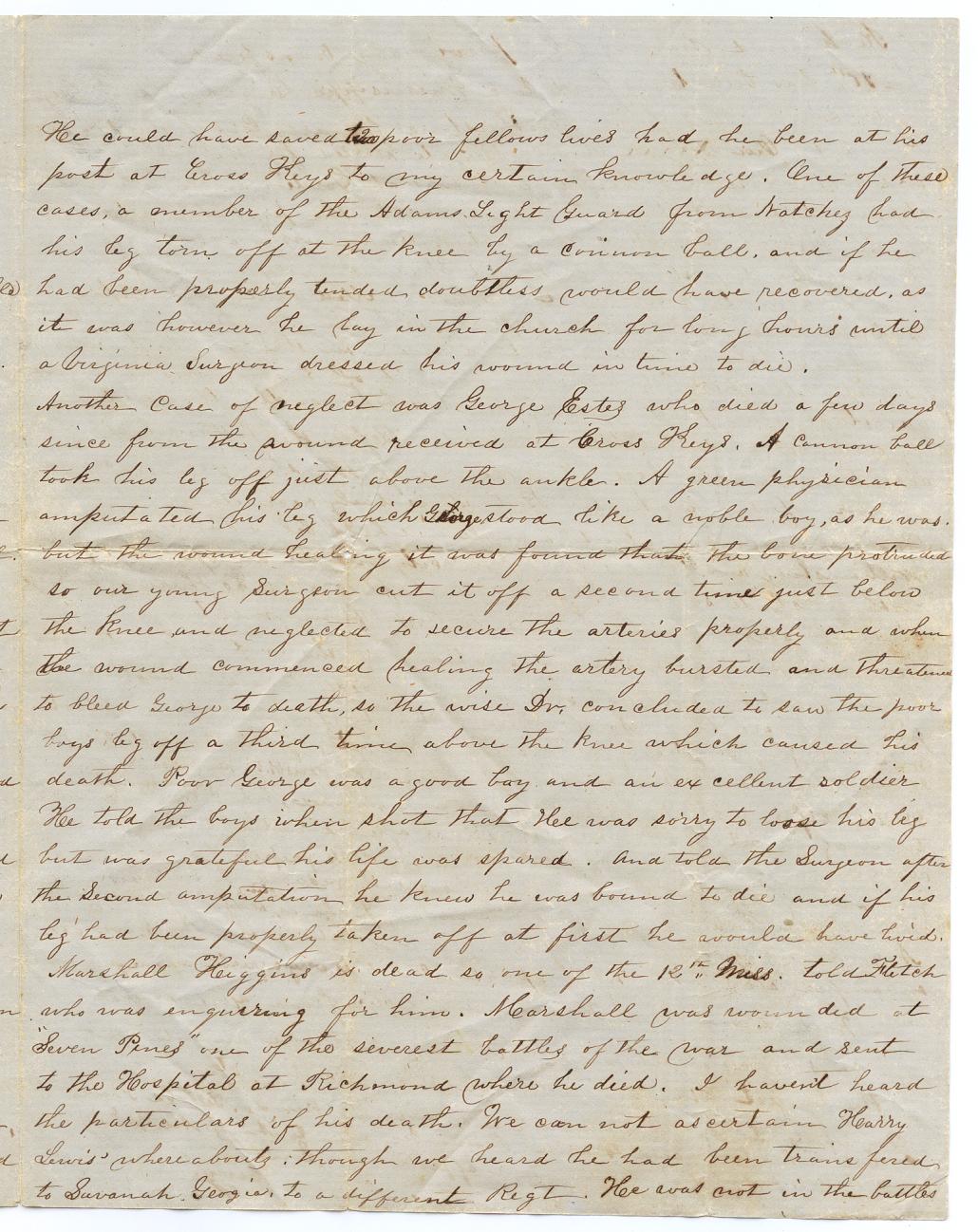 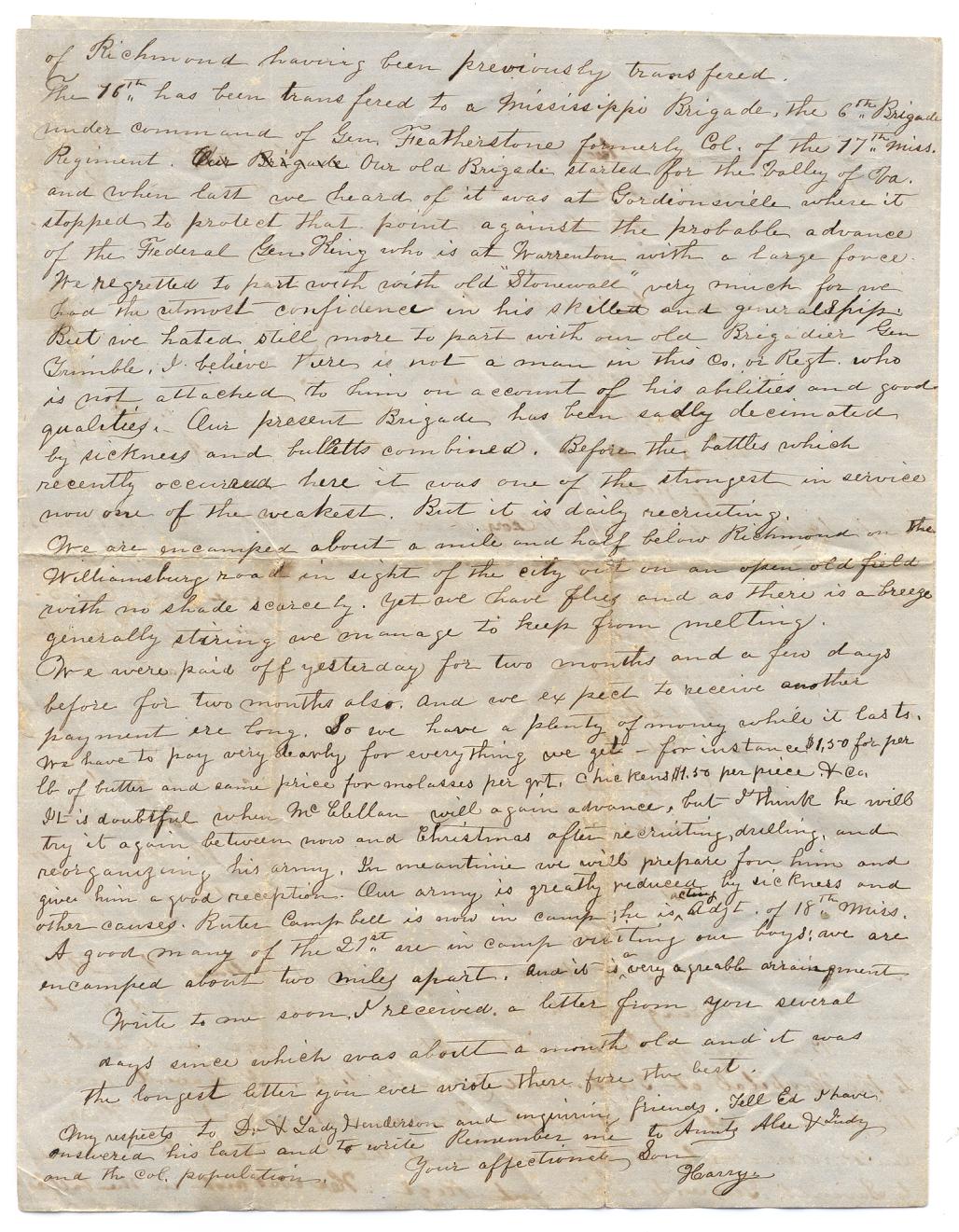 I commence this letter to you not that I have anything particularly interesting to speak of; nor that I am bound by the established rules of correspondence to write, as I have written twice since I’ve received any communication from you in the letter line; but simply because it is a quiet Sunday evening with me – a rare occurrance indeed!

And further, because I well know it will cheer and please you to hear from us. In the first place we are all well, that is, none of us are really sick though Fletch is complaining a little. This is

Brother John joined the company about the 5th of this month and has been with us ever since, and for the most part in command of the company, Capt Feltus[?] acting major. Brother John is more popular than of old – that is the company having experienced in the late battles the result – of want of dicipline and seeing the evil consequent thereoff, appreciated his strictness.

Mack, of course, returned to camp with Bud. He is not as home sick as he was two months since, but still says he would like to go home some time this fall. Mack is very useful to us and if anything is to be gotten he obtains it for us. He is considerate and studies our wishes. Frank is well and seems well contented.

And I can speak for myself and say that I am well though I have been feverish and unwell some days ago. The wether for the past week has been exceedingly hot and oppressive with the exception of yesterday and today when it commenced raining and became more tolerable and pleasant. Today is especially pleasant, cloud succeeding sunshine, and a breeze playing all day long. We had preaching this morning in the Regt. Reeves, our Chaplain, gave a sermon which I did not hear because I had gone to take a bath and did not get back in time; and besides I don’t think he is a man of the right stripe – aside from ministering the Holy Gospel. One thing is certain, by [?] or not, he exercises no moral influence in the Regiment and commands not the respect of its members. This is a great pity for we sadly need the restraining influence of religion in camp and a good holy man a the post would do untold good. In fact two departments of our army sadly need to be cared for – the religious and the medical. We need the presence of good men who command the respect of their fellows to attend the spiritual welfare of men fighting in a glorious case. And we suffer still more for the want of experienced and attentive surgeons. A great proportion of our asst. Surgeons are men or rather boys of scarcely no knowledge or experience. Our Asst. Surgeon Grooves showed cowardice three times on the field of battle. He could not be found till the battle was over and then away in the rear. He is irretrievably disgraced not one of the Regt. deign to notice him at all. He could have saved two poor fellows lives had he been at his post at Cross Keys to my certain knowledge. One of these cases, a member of the Adams Light Guard from Natchez had his leg torn off at the knee by a cannon ball, and if he had been properly tended, doubtless would have recovered, as it was however he lay in the church for long hours until a Virginia Surgeon dressed his wound in time to die.

Another case of neglect was George Estes who died a few days since from the wound received at Cross Keys. A cannon ball took his leg off just above the ankle. A green physician amputated his leg which George withstood like a noble boy, as he was. but the wound healing it was found that the bone protruded so our young surgeon cut it off a second time just below the knee and neglected to secure the arteries properly and when the wound commenced healing the artery bursted and threatened to bleed George to death, so the wise Dr. concluded to saw the poor boys leg off a third time above the knee which caused his death. Poor George was a good boy and an excellent soldier. He told the boys when shot that He was sorry to loose his leg but was grateful his life was spared. And told the Surgeon after the Second amputation he knew he was bound to die and if his leg had been properly taken off at first he would have lived. Marshall Higgins is dead so one of the 12th Miss. told Fletch who was enquiring for him. Marshall was wounded at “Seven Pines” one of the severest battles of the war and sent to the Hospital at Richmond where he died. I haven’t heard the particulars of his death. We can not ascertain Harry Lewis’ whereabouts though we heard he had been transfered to Savanah Georgia, to a different Regt. He was not in the battle of Richmond having been previously transfered.

The 16th has been tranfered to a Mississippi Brigade, the 6th Brigade under command of Gen. Featherstone formerly Col. of the 17th Miss. Regiment. Our old Brigade started for the Valley of Va. and when last we heard of it was at Gordionsville[?] where it stopped to protect that point against the probable advance of the Federal Gen. King who is at Warrenton with a large force. We regretted to part with with old “Stonewall” very much for we had the utmost confidence in his skill and generalship. But we hated still more to part with our old Brigadier Gen. Trimble. I believe there is not a man in this Co. or Regt. who is not attached to him on account of his abilities and good qualities. Our present Brigade has been sadly decimated by sickness and bulletts combined. Before the battles which recently occurred here it was one of the strongest in service now one of the weakest. But it is daily recruiting.

We are encamped about a mile and half below Richmond on the Williamsburg road in sight of the city out on an open old field with no shade scarcely. Yet we have flies and as there is a breeze generally stiring we manage to keep from melting. We were paid off yesterday for two months and a few days before for two months also. And we expect to receive another payment ere long. So we have a plenty of money while it lasts. We have to pay very dearly for everything we get – for instance $1.50 for per lb. of butter and same price for molasses per qrt. chickens $1.50 per piece. & co.

It is doubtful when McClellan will again advance, but I think he will try it again between now and Christmas after recruiting, drilling, and reorganizing his army. In meantime we will prepare for him and give him a good reception. Our army is greatly reduced by sickness and other causes. Ruter[?] Campbell is now in camp; he is Chief Adjt. of 18th Miss. A good many of the 21st are in camp visiting our boys; we are encamped about two miles apart. And it is a very agreeable arrangement.

Write to me soon. I received a letter from you several days since which was about a month old and it was the longest letter you ever wrote there fore the best.

My respects to Dr. & Lady Henderson and inquiring friends. Tell Ed I have answered his last and to write. Remember me to Aunts [Alse & Indy?] and the col. population.