9 August 1862: “No telling what [McClellan] is about, but no doubt reorganizing and strengthening his army and probably awaiting the 300,000 recruits from Yankee Land.”

Posted on 9 Aug ’12 by Biff Hollingsworth 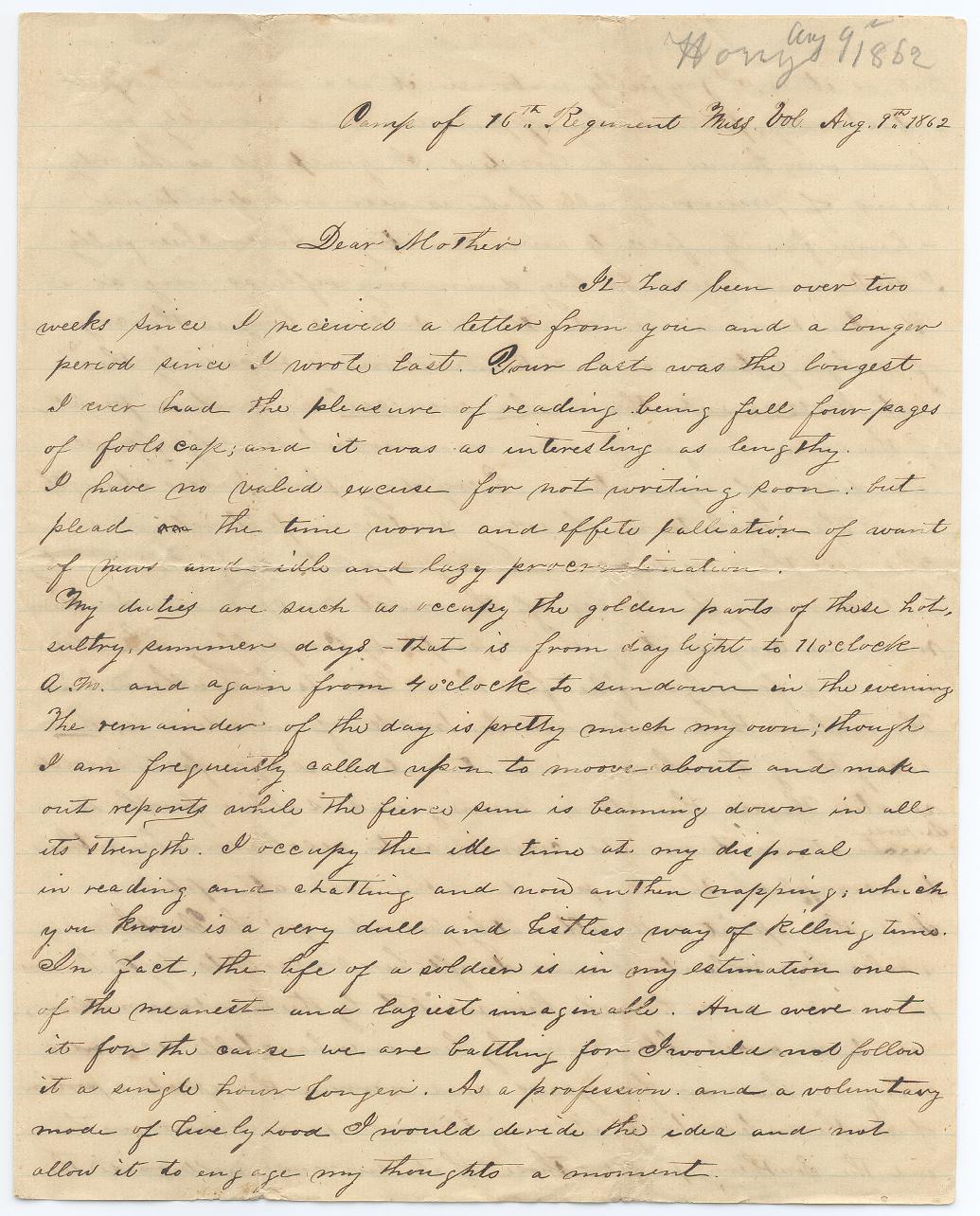 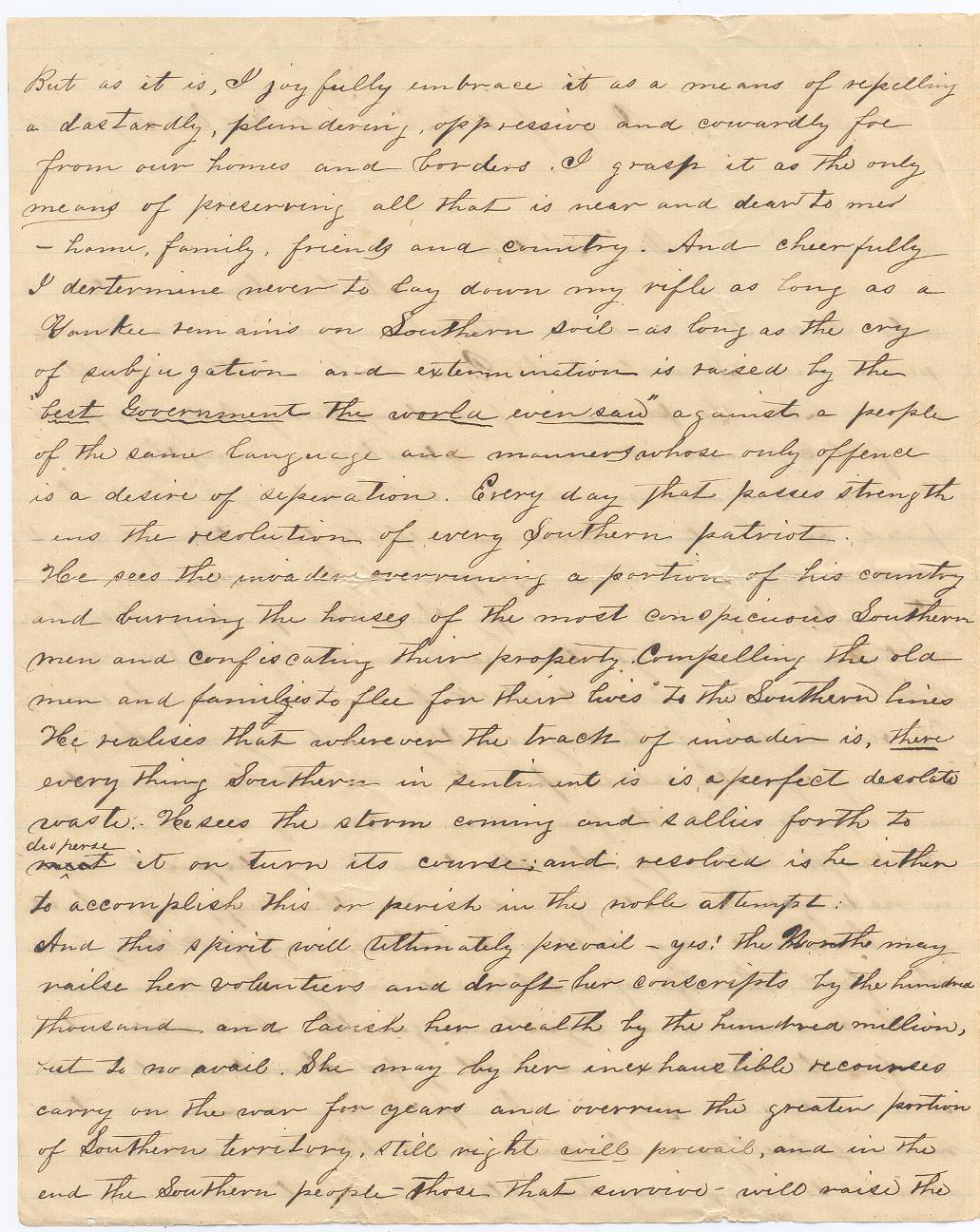 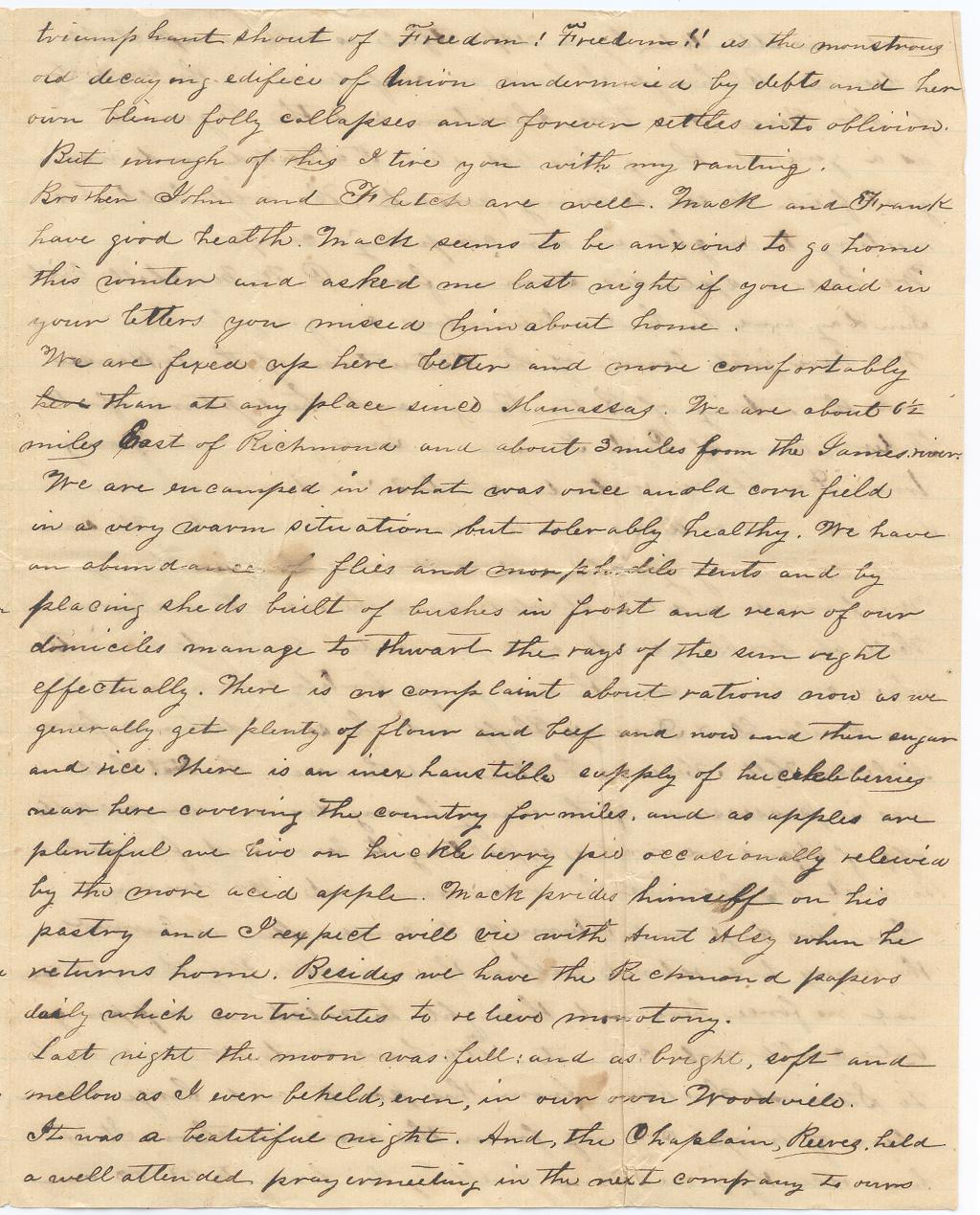 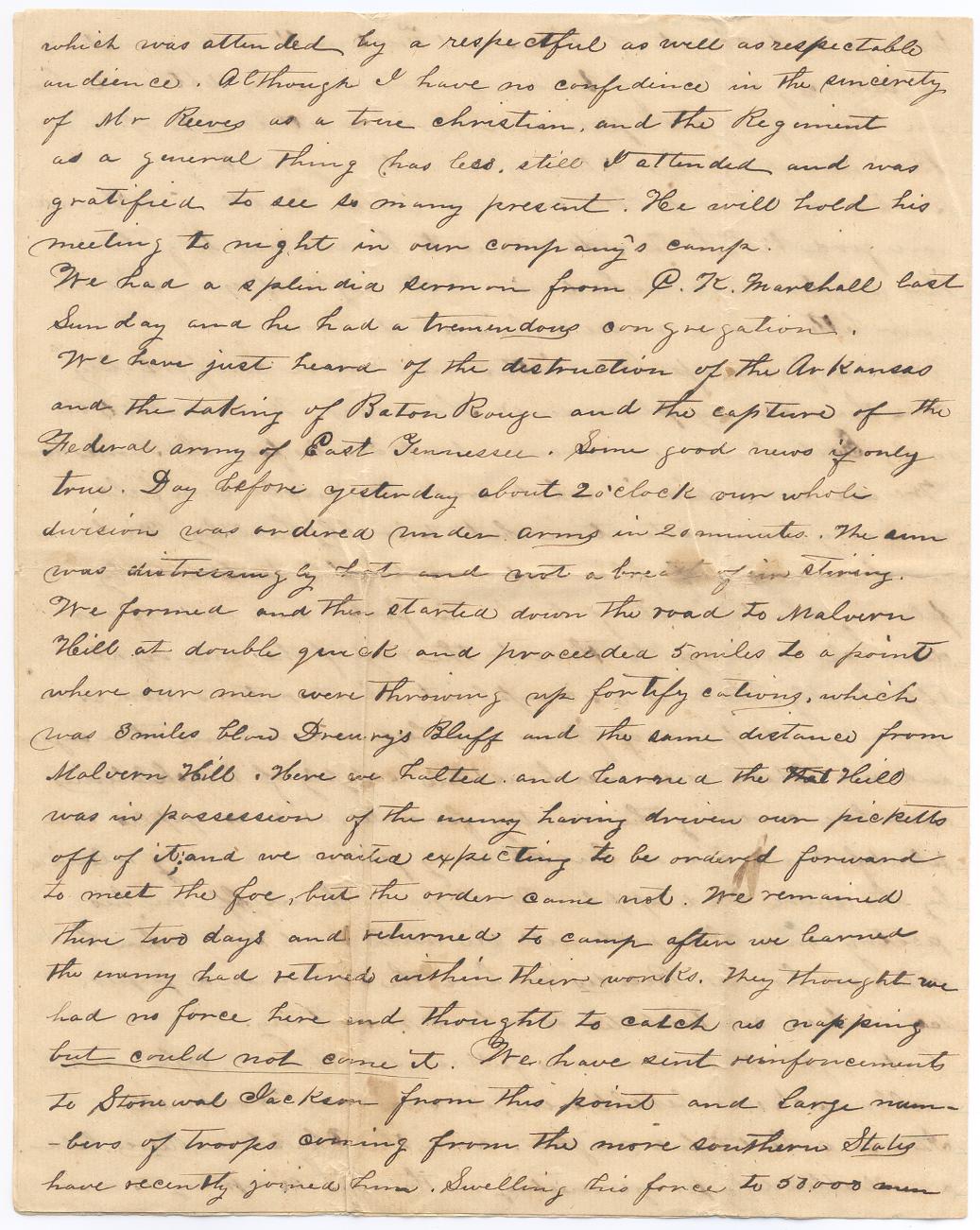 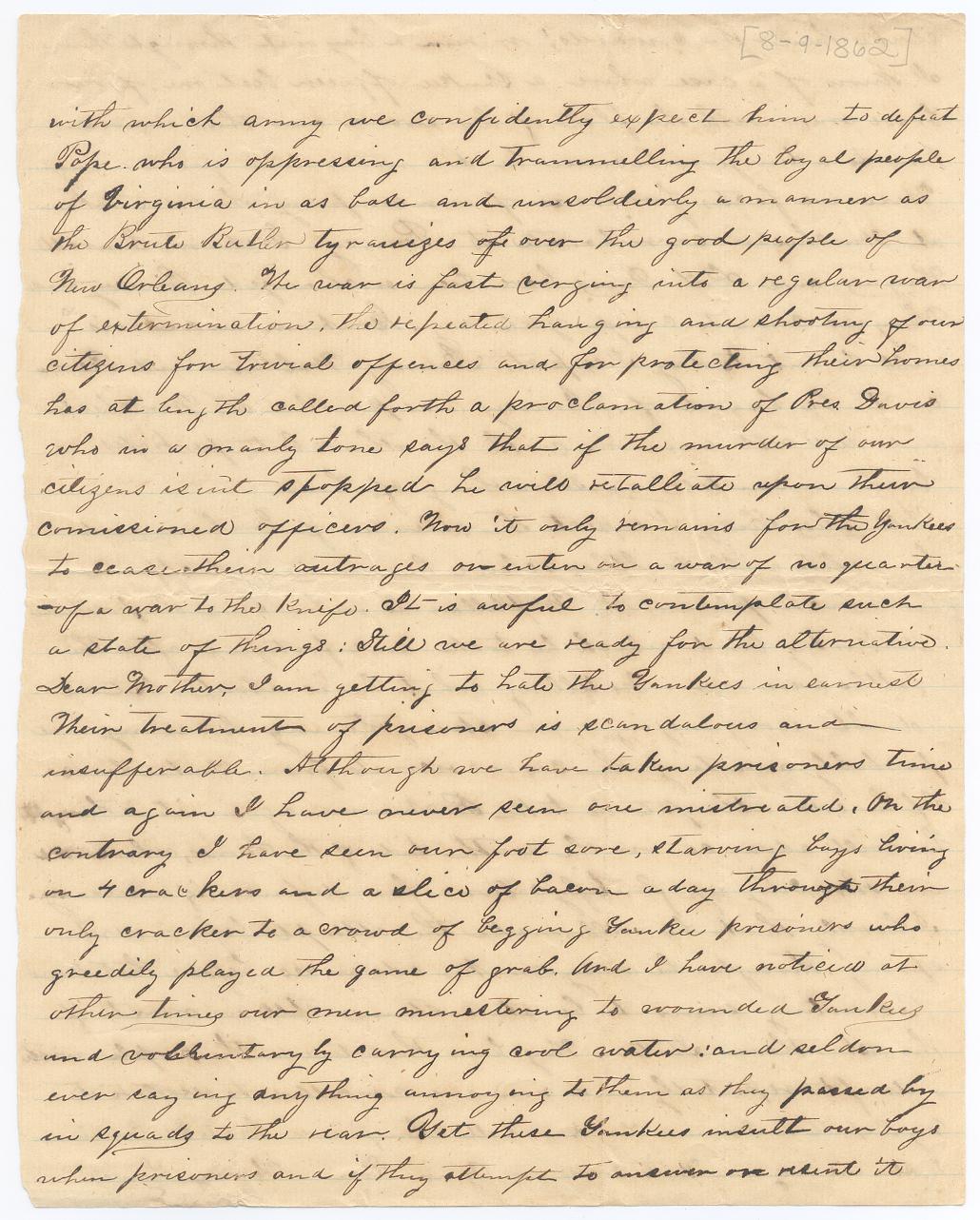 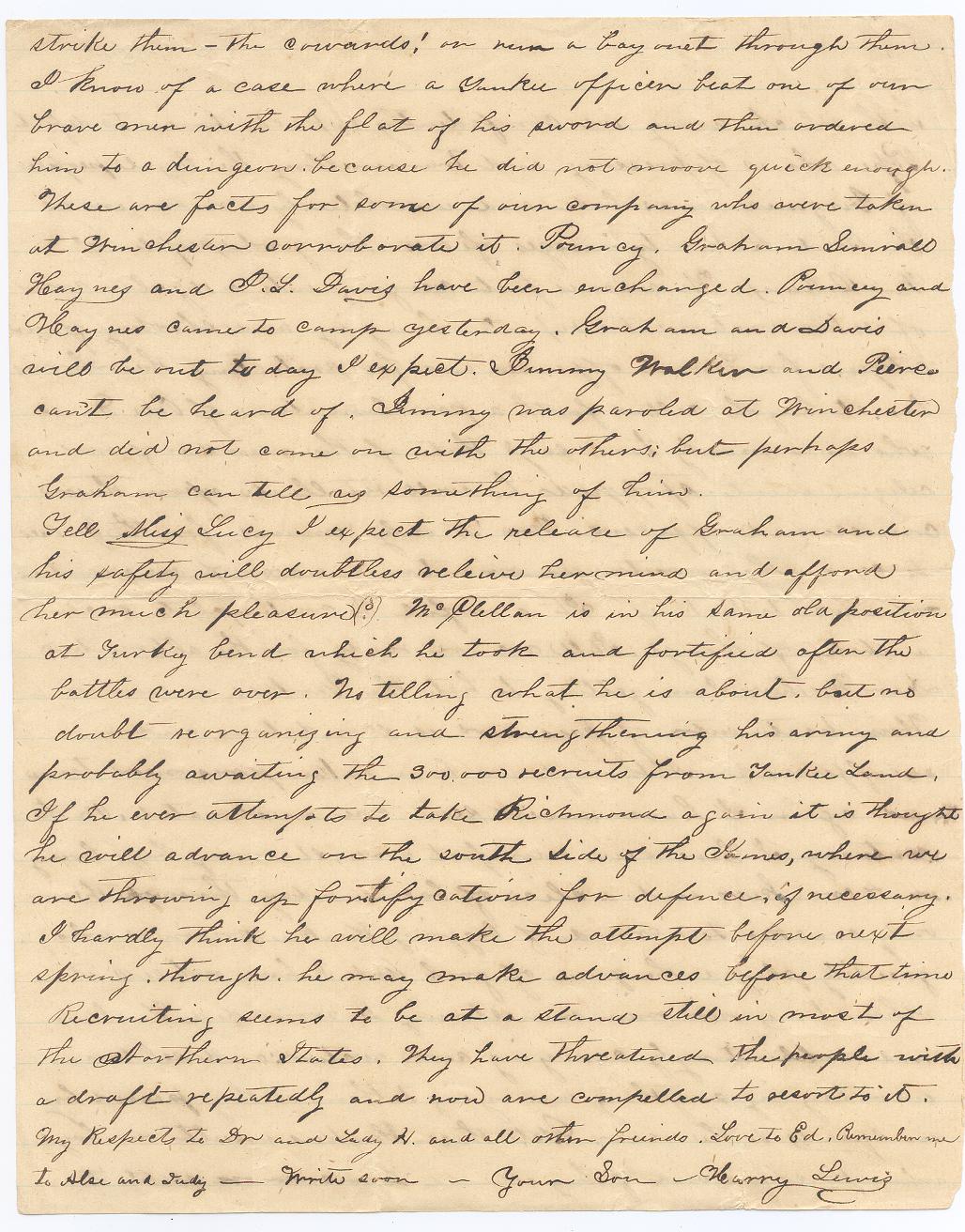 It has been over two weeks since I received a letter from you and a longer period since I wrote last. Your last was the longest I ever had the pleasure of reading being full four pages of fools [?]; and it was as interesting as lengthy. I have no valid excuse for not writing soon; but plead the time worn and effete palliation of want of news and idle and lazy procrastination.

My duties are such as occupy the golden parts of those hot, sultry, summer days – that is from day light to 11 o’clock a.m. and again from 4 o’clock to sundown in the evening. The remainder of the day is pretty much my own; though I am frequently called upon to moove about and make out reports while the fierce sun is beaming down in all its strength. I occupy the idle time at my disposal in reading and chatting and now another napping, which you know is a very dull and listless way of killing time. In fact, the life of a soldier is in my estimation one of the meanest and laziest imaginable. And were not if for the cause we are battling for I would not follow it a single hour longer. As a profession and a voluntary mode of livelyhood I would deride the idea and not allow it to engage my thoughts a moment.

But as it is, I joyfully embrace it as a means of repelling a dastardly, plundering, oppressive and cowardly foe from our homes and borders. I grasp it as the only means of preserving all that is near and dear to me – home, family, friends and country. And cheerfully I determine never to lay down my rifle as long as a Yankee remains on Southern soil – as long as the cry of subjugation and extermination is raised by the “best Government the world even saw” against a people of the same language and manners whose only offence is a desire of seperation. Every day that passes strengthens the resolution of every Southern patriot.

He sees the invader overrunning a portion of his country and burning the houses of the most conspicuous Southern men and confiscating their property, compelling the old men and families to flee for their lives to the Southern lines. He realises that wherever the track of invader is, there every thing Southern in sentiment is is a perfect desolate waste. He sees the storm coming and sallies forth to disperse it or turn its course; and resolved is he either to accomplish this or perish in the noble attempt.

And this spirit will ultimately prevail – yes! The North may railse her volunteers and draft – her conscripts by the hundred thousand and lavish her wealth by the hundred million, but to no avail. She may by her inexhaustible recourses carry on the war for years and overrun the greater portion of Southern territory, still right will prevail, and in the end the Southern people – those that survive – will raise the triumphant shout of Freedom! Freedom!! as the monstrous old decaying edifice of Union undermined by debts and her own blind folly collapses and forever settles into oblivion. But enough of this I tire you with my ranting.

Brother John and Fletch are well. Mack and Frank have good health. Mack seems to be anxious to go home this winter and asked me last night if you said in your letters you missed him about home.

We are fixed up here better and more comfortably than at any place since Manassas. We are about 6 1/2 miles East of Richmond and about 3 miles from the James River.

We are encamped in what was once an old corn field in a very warm situation but tolerably healthy. We have an abundance of flies and [?] tents and by placing sheds built of bushes in front and rear of our domiciles manage to thwart the rays of the sun right effectually. There is no complaint about rations now as we generally get plenty of flour and beef and now and then sugar and rice. There is an inexhaustible supply of huckleberries near here covering the country for miles and as apples are plentiful we live on huckleberry pie occasionally relieved by the more acid apple. Mack prides himself on his pastry and I expect will vie with Aunt Alsy[?] when he returns home. Besides we have the Richmond papers daily which contributes to relieve monotony.

Last night the moon was full and as bright, soft and mellow as I ever beheld, even, in our own Woodville. It was a beautiful night. And, the Chaplain, Reeves, held a well attended prayer meeting in the next company to ours, which was attended by a respectful as well as respectable audience. Although I have no confidence in the sincerity of Mr. Reeves as a true christian, and the Regiment as a general thing has less, still I attended and was gratified to see so many present. He will hold his meeting to night in our company’s camp.

We had a splendid sermon from C.K. Marshall last Sunday and he had a tremendous congregation. We have just heard of the destruction of the Arkansas and the taking of Baton Rouge and the capture of the Federal Army of East Tennessee. Some good news if only true. Day before yesterday about 2 o’clock our whole division was ordered under arms in 20 minutes. The sun was distressingly hot and not a breath of air stiring. We formed and then started down the road to Malvern Hill at double quick and proceeded 5 miles to a point where our men were throwing up fortifications, which was 3 miles blow Drewry’s Bluff and the same distance from Malvern Hill. Here we halted and learned the Hill was in possession of the enemy having driven our pickets off of it; and we waited expecting to be ordered forward to meet the foe, but the order came not. We remained there two days and returned to camp after we learned the enemy had retired within their works. They thought we had no force here and thought to catch us napping but could not come it. We have sent reinforcements to Stonewall Jackson from this point and large numbers of troops coming from the more southern states have recently joined here. Swelling his force to 50,000 men with which army we confidently expect him to defeat Pope who is oppressing and trammelling the loyal people of Virginia in as base and unsoldierly a manner as Brute Butler tyranizes over the good people of New Orleans. The war is fast verging into a regular war of extermination, the repeated hanging and shooting of our citizens for trivial offences and for protecting their homes has at length called forth a proclamation of Pres. Davis who in a manly tone says that if the murder of our citizens isn’t stopped he will retalliate upon their commissioned officers. Now it only remains for the Yankees to cease their outrages or enter on a war of no quarter – or a war to the knife. It is awful to contemplate such a state of things. Still we are ready for the alternative. Dear Mother, I am getting to hate the Yankees in earnest. Their treatment of prisoners is scandalous and insufferable. Although we have taken prisoners time and again I have never seen one mistreated. On the contrary I have seen our foot sore, starving boys living on 4 crackers and a slice of bacon a day through their only cracker to a crowd of begging Yankee prisoners who greedily played the game of grab. And I have noticed at other times our men ministering to wounded Yankees and voluntaryly carrying cool water, and seldom ever saying anything annoying to them as they passed by in squads to the rear. Yet these Yankees insult our boys when prisoners and if they attempt to answer we resent it. Strike them – the cowards! or run a bayonet through them. I know of a case where a Yankee officer beat one of our brave men with the flat of his sword and then ordered him to a dungeon because he did not moove quick enough. These are facts for some of our company who were taken at Winchester corroborate it. Pouncy, Graham, [Simrall?], Haynes came to camp yesterday. Graham and Davis will be out to day I expect. Jimmy Walker and Pierce can’t be heard of. Jimmy was paroled at Winchester and did not come on with the others, but perhaps Graham can tell us something of him.

Tell Miss Lucy I expect the release of Graham and his safety will doubtless relieve her mind and afford her much pleasure(?). McClellan is in his same old position at Turkey bend which he took and fortified after the battles were over. No telling what he is about, but no doubt reorganizing and strengthening his army and probably awaiting the 300,000 recruits from Yankee Land. If he ever attempts to take Richmond again it is thought he will advance on the south side of the James, where we are throwing up fortifications for defence, if necessary. I hardly think he will make the attempt before next spring. Though, he may make advances before that time. Recruiting seems to be at a stand still in most of the Northern States. They have threatened the people with a draft repeatedly and now are compelled to resort to it.

My respects to Dr. and Lady H. and all other friends. Love to Ed. Remember me to Alse and Judy___ Write soon___