22 August 1862: “Feeling a deep interest and even anxiety in the speedy and faithful execution of the conscript law, I cannot allow myself to be represented as opposed or even neutral towards it.”

Posted on 22 Aug ’12 by Biff Hollingsworth

Please see the post for 5 August 1862 and other posts tagged “conscription” for more of this ongoing thread. 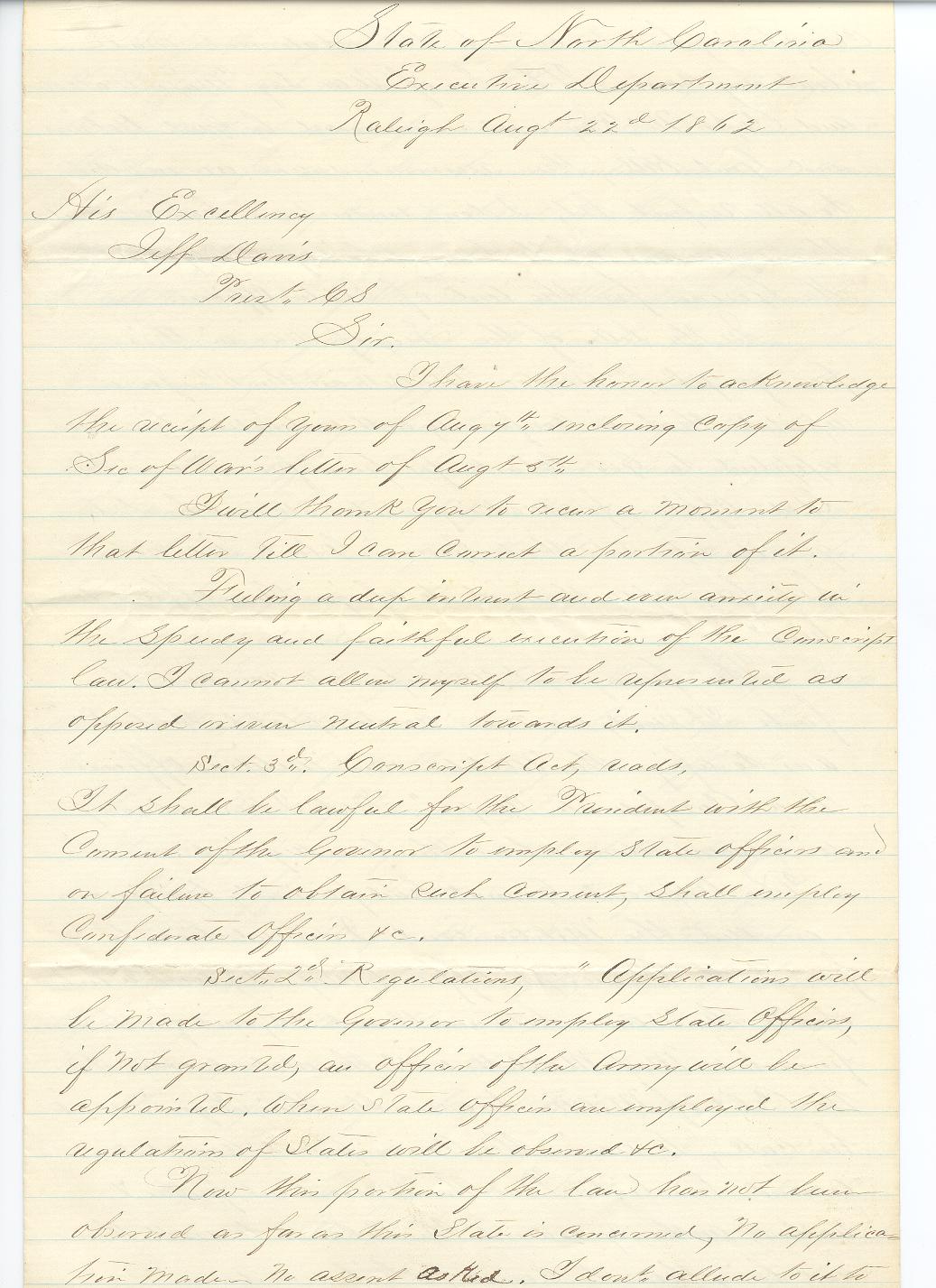 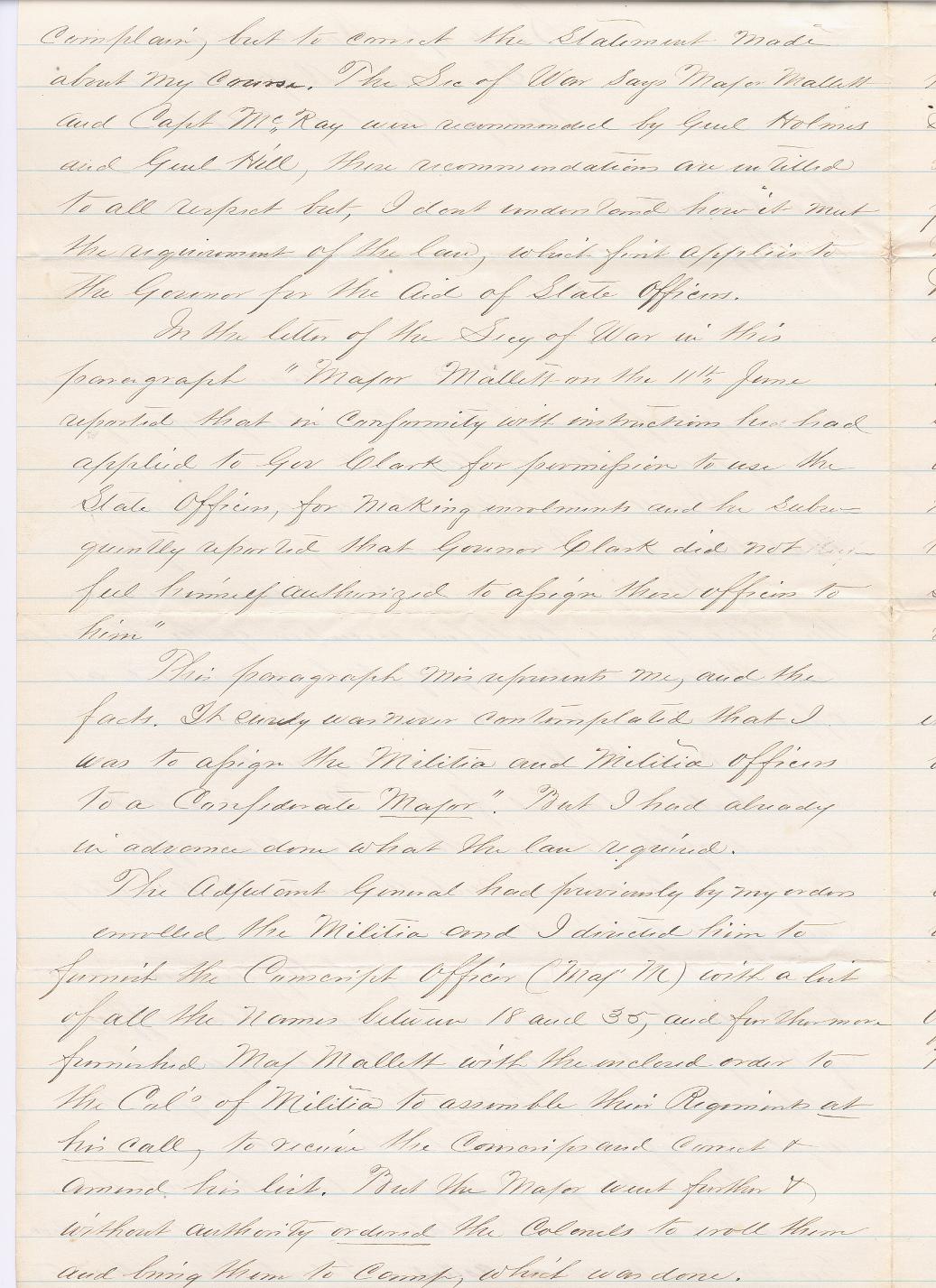 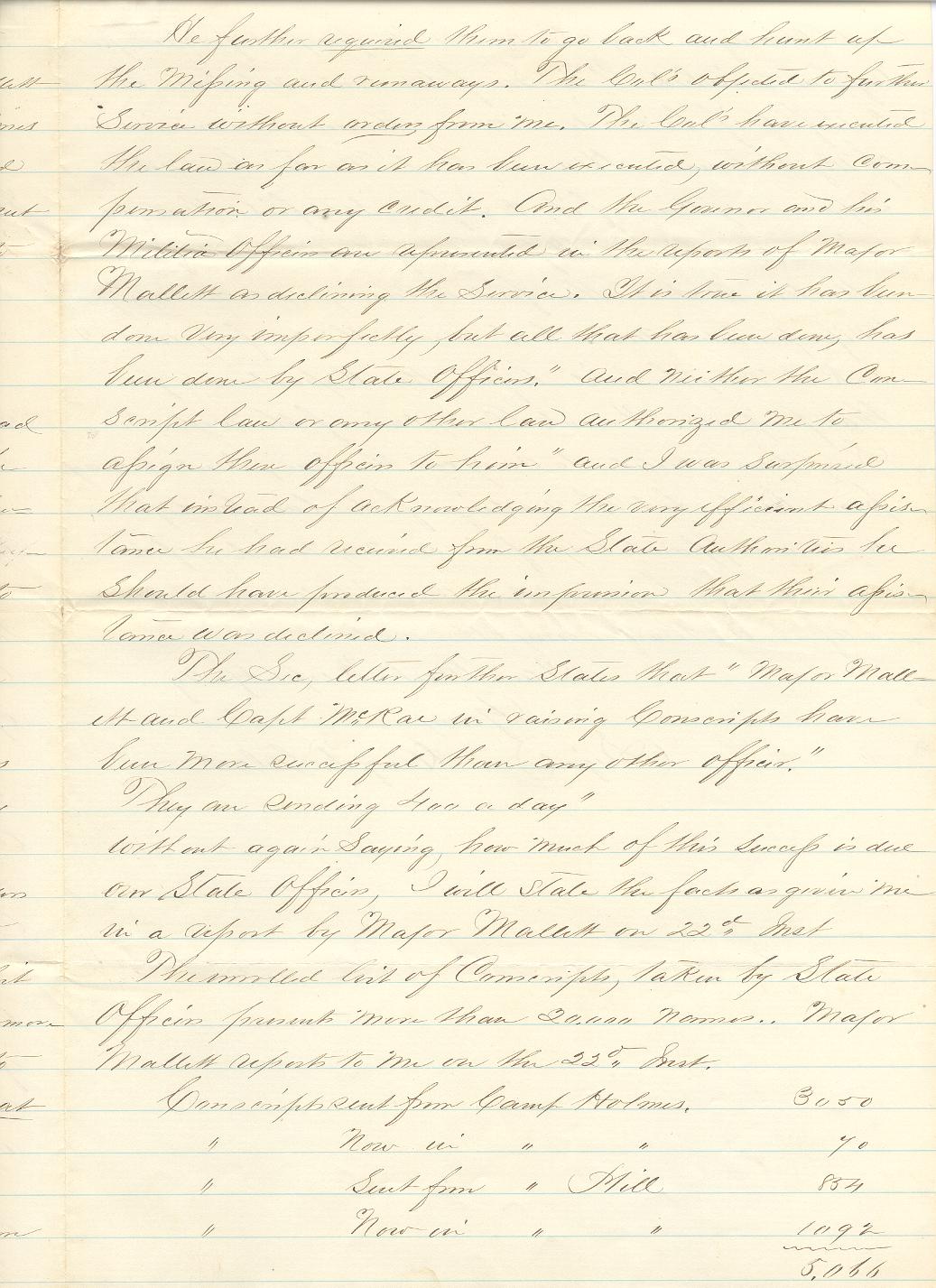 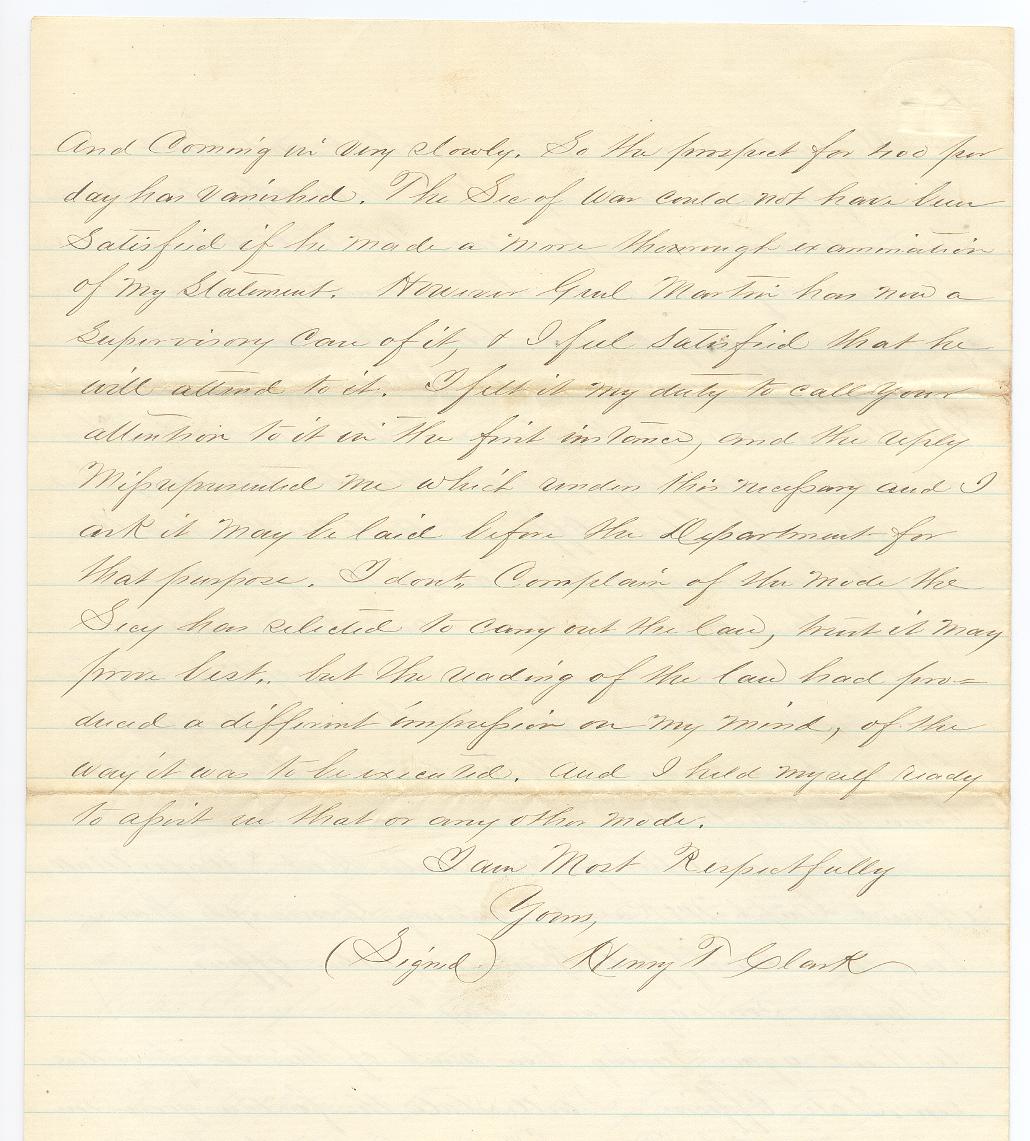 I have the honor to acknowledge the receipt of yours of Aug. 7th[?] enclosing copy of Sec. of War’s letter of Augt. 5th.

I will thank you to recur a moment to that letter till I can correct a portion of it.

Feeling a deep interest and even anxiety in the speedy and faithful execution of the conscript law, I cannot allow myself to be represented as opposed or even neutral towards it.

It shall be lawful for the President with the consent of the Governor to employ state officers and on failure to obtain such consent, shall employ Confederate Officers &c.

Sect. 2d Regulations, “Applications will be made to the Governor to employ state officers, if not granted, an officer of the Army will be appointed. When state officers are employed the regulations of states will be observed &c.

Now this portion of the law has not been observed as far as this state is concerned, no application made – no consent asked. I don’t allude to it to complain, but to correct the statement made about my course. The Sec. of War says Major Mallett and Capt. McRay were recommended by Genl. Holmes and Genl. Hill, these recommendations are entitled to all respect but, I don’t understand how it meet the requirement of the law, which first applies to the Governor for the Aid of state officers.

In the letter of the Secy. of War in this paragraph “Major Mallett on the 11th June reported that in conformity with instructions he had applied to Gov. Clark for permission to use the state officers, for making enrolments and he subsequently reported that Governor Clark did not feel himself authorized to assign these officers to him.”

This paragraph misrepresents me, and the facts. It surely was never contemplated that I was to assign the Militia and Militia officers to a Confederate Major.” But I had already in advance done what the law required.

The Adjutant General had previously by my orders enrolled the Militia and I directed him to furnish the Conscript officer (Maj. M) with a list of all the names between 18 and 35, and furthermore furnished Maj. Mallett with the enclosed order to the Col’s of Militia to assemble their Regiments at his call, to receive the conscripts and correct & amend his list. But the Major went further & without authority ordered the Colonels to enroll them and bring them to camp, which was done.

He further required them to go back and hunt up the missing and runaways. The Col’s objected to further service without orders from me. The Col’s have executed the law as far as it has been executed, without compensation or any credit. And the Governor and his Militia officers are represented in the reports of Major Mallett as declining the service. It is true it has been done very imperfectly, but all that has been done, has been done by State Officers.” And neither the conscript law or any other law authorized me to assign these officers to him” and I was surprised that instead of acknowledging the very efficient assistance he had received from the State Authorities he should have produced the impression that their assistance was declined.

The Sec’ letter further states that “Major Mallett and Capt. McRae in raising conscripts have been more successful than any other officer.”

They are sending 400 a day”
without again saying, how much of this success is due our State Officers, I will state the facts as given me in a report by Major Mallett on 22d Inst.

The enrolled list of Conscripts, taken by State Officers presents more than 20,000 names. Major Mallett reports to me on the 22d Inst.

And coming in very slowly. So the prospect for 400 per day has vanished. The Sec of War could not have been satisfied if he made a more thorough examination of my statement. However Genl. Martin has now a supervisory care of it, & I feel satisfied that he will attend to it. I felt it my duty to call your attention to it in the first instance, and the reply misrepresented me which under this necessary and I ask it may be laid before the Department for that purpose. I don’t complain of the mode the Secy. has selected to carry out the law, trust it may prove best, but the reading of the law had produced a different impression on my mind, of the way it was to be executed. And I held myself ready to assist in that or any other mode.

I am Most Respectfully
Yours,
(signed) Henry T. Clark