5 September 1862: “I need not repeat any of the incidents of our retreat which are and will be fresh in my memory for a long time to come.”

Item description: Letter, 5 September 1862, from Union soldier Stephen Tippet Andrews to his beloved, Margaret (Maggie) Little. Stephen Tippet Andrews enlisted in the 85th New York Infantry Regiment on 26 August 1861. He helped organize Company F, and was mustered in as first sergeant of the company in the second half of 1861. Andrews was captured with the “Plymouth Pilgrims” in Plymouth, N.C., on 20 April 1864, and was held captive in Georgia and South Carolina for almost a year. 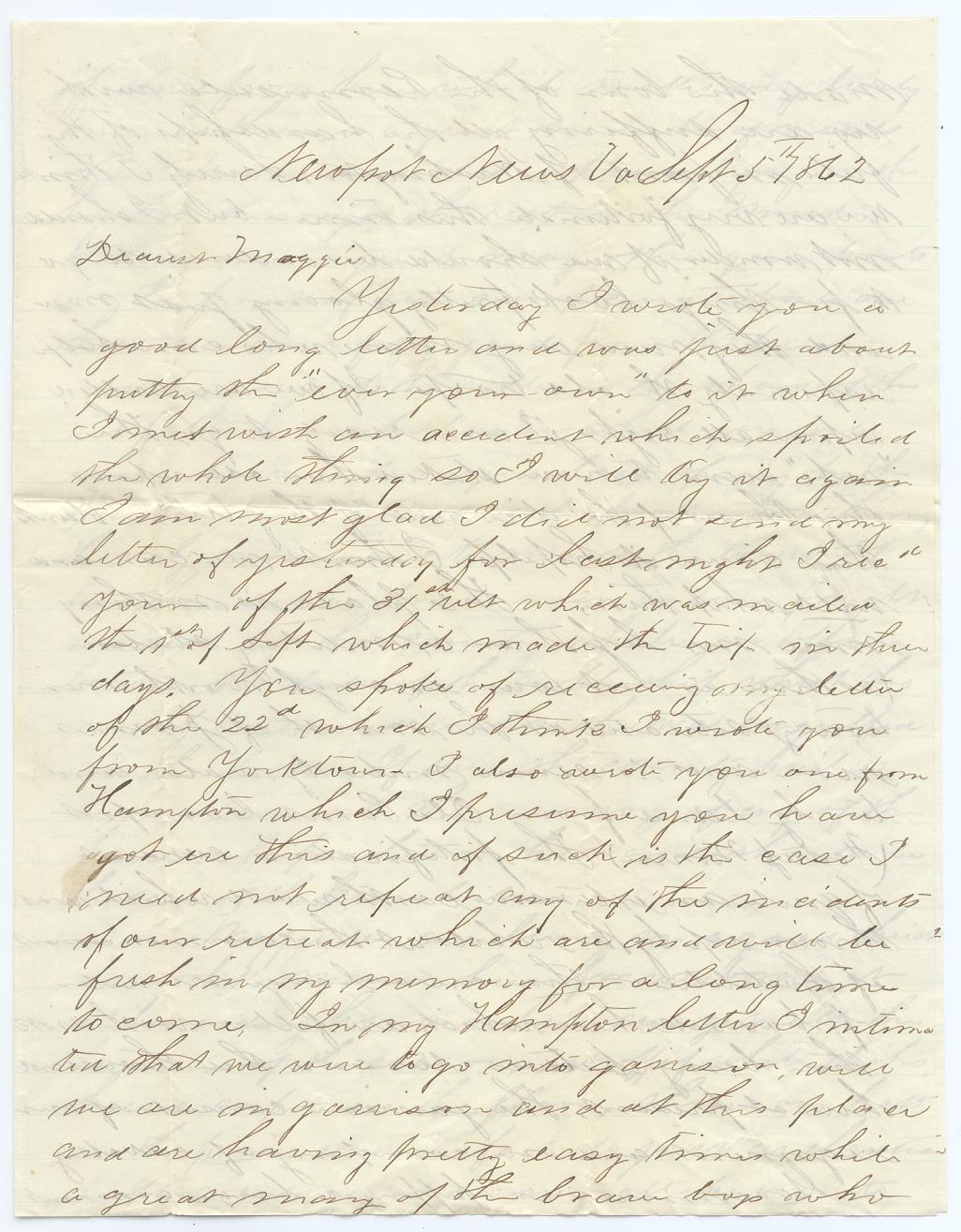 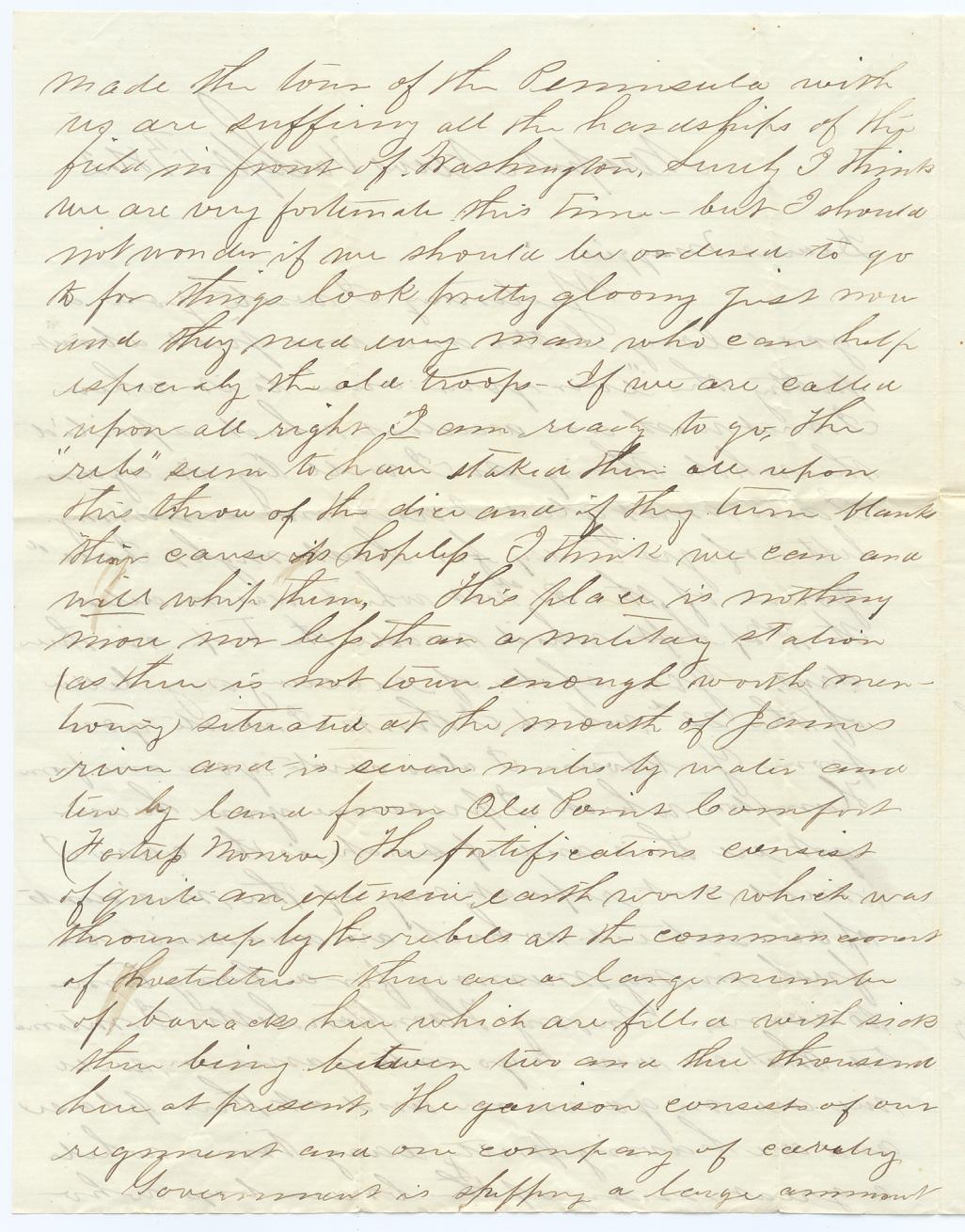 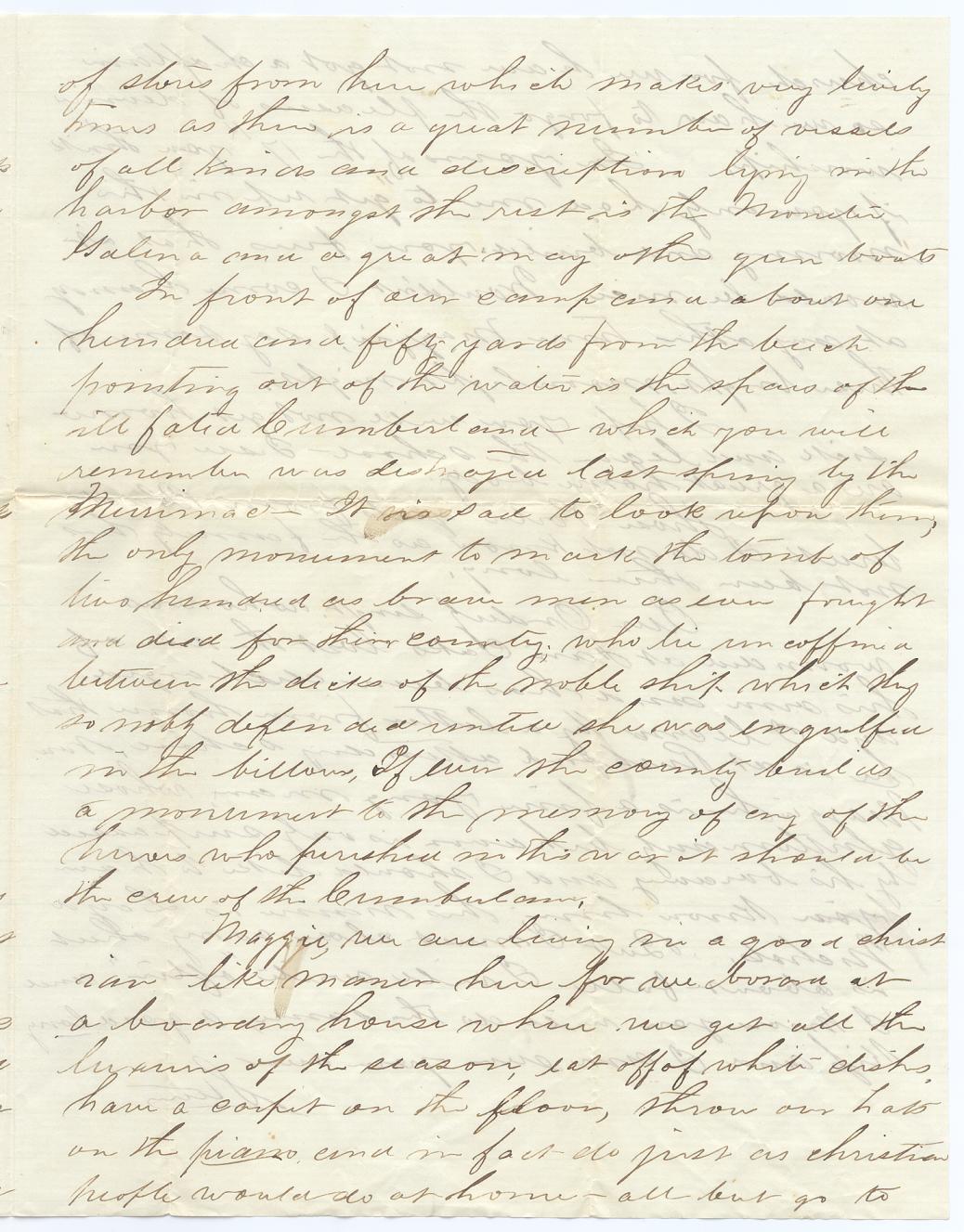 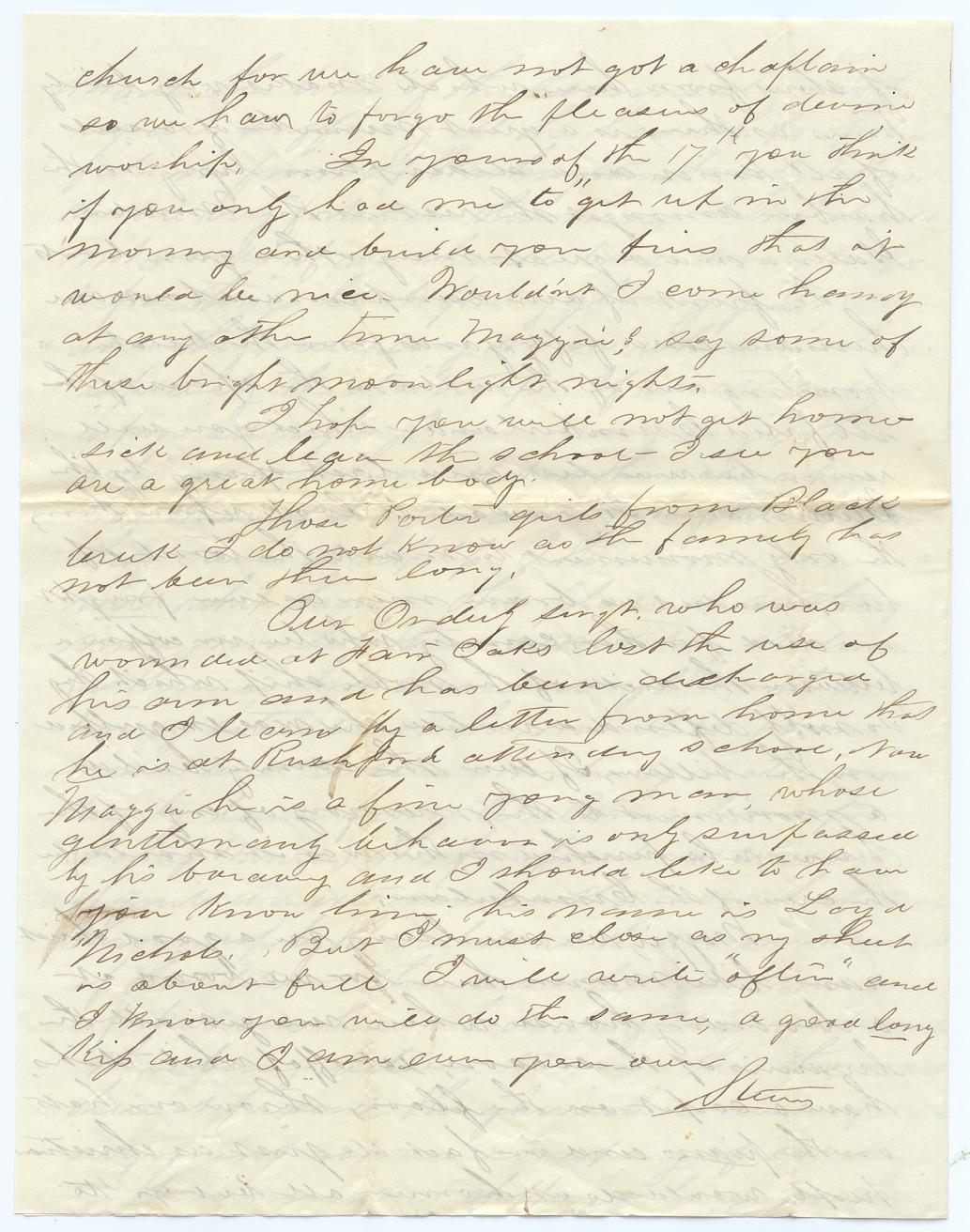 Yesterday I wrote you a good long letter and I was just about printing the “ever your own” to it when I met with and accident which spoiled the whole thing so I will try it again I am most glad I did not send my letter of yesterday for last night I rec’d yours of the 31st relt (?) which was mailed on the 1st of Sept which made the trip in three days. You spoke of receiving my letter of the 22nd which I think I wrote you from Yorktown – I also wrote you from Hampton which I presume you have got ere this and if such is the case I need not repeat any of the incidents of our retreat which are and will be fresh in my memory for a long time to come. In my Hampton letter I intimated that we were to go into garrison, well we are having pretty easy times while a great many of the brave boys who made the tour of the Peninsula with us are suffering all the hardships of the filed in front of Washington. Surely I think we are very fortunate this time – but I should not wonder if we should be ordered to go to (sic) for things look pretty gloomy just now and they need every man who can help especialy (sic) the old troops – If we are called upon all right I am ready to go, the “rebs” seem to have staked their all upon this throw of the dice and if they turn blanks their cause is hopeless – I think we can and will whip them, This place is nothing more nor less than a military station (as there is not town enough worth mentioning) situated at the mouth of the James river and is seven miles by water and ten by land from Old point Comfort (Fortress Monroe) the fortifications consist of quite and extensive earth work which is thrown up by the rebels at the commencement of between two and three thousand here at present, The garrison consists  of our regiment and one company cavalry

In front of our cam and about one hundred and fifty yards from the beach pointing out of the water is the spail (?) of the ill fated Cumberland – which you will remember was destroyed last spring by the Merrimac – It is sad to look upon them; the only monument to mark the tomb of two hundred as brave men as ever fought and died for their country; who lie uncoffined between the decks of the noble ship which they so nobly defended untill (sic) she was engulfed in the billows, If ever the country builds a monument to the memory of any of the heroes who perished in this war it should be the crew of the Cumberland,

Maggie, we are living in a good christian – like maner (sic) here for we board at a boarding house where we get all the luxuries of the season, eat off of white dishes, have a carpet on the floor, throw our hats on the piano, and in fact do just as christian people would do at home – all but go to church for we have not got a chaplain so we have to forgo (sic) the “pleasures of divine worship, In ours of the 1th you think if you only had me to “get up in the morning and build you fires that it would be nice. Wouldn’t I come handy at any other time Maggie? say some of these bright moonlight nights.

I hope you will not get homesick and leave the school – I see you are a great home body.

Those Porter Girls from Black Creek I do not know as the family has not been there long.

Our Orderly sergt. who was wounded at Fair Oaks lost the use of his arm and has been discharged and I learn by a letter from home that he is at Rushford attending school, Now Maggie he is a fine young man, whose gentlemanly behavior is only surpassed by his bravery and I should like to have you know him; his name is Loyd Nichols. But I must close as my sheet is about full I will write “often” and I know you will do the same, a good long kiss and I am ever your own