6 September 1862: “I lost my right leg below the knee in the heavy skirmish on Monday 1st inst. and am now at Middleburg…”

Posted on 6 Sep ’12 by Biff Hollingsworth

Item description: Letter, 6 September 1862, from Walter Waightstill Lenoir, captain of Company A of the 37th North Carolina Infantry Regiment, to his brother Rufus Lenoir. Walter writes to tell his brother that he has been wounded at the Battle of Chantilly (Ox Hill) and that his right leg has been amputated.

More about Walter Lenoir:
Walter Waightstill Lenoir was born in 1823 into the wealthy Lenior family. He attended the University of North Carolina and practiced law in North Carolina before the Civil War. Although Lenoir opposed slavery and disagreed with secession, he joined the Confederate army in January 1862. In September 1862, Lenoir was injured and his right leg was amputated. He returned to his family and moved to Haywood County, where he became a farmer. In 1883, he was elected as a representative to the North Carolina Assembly and served one term. 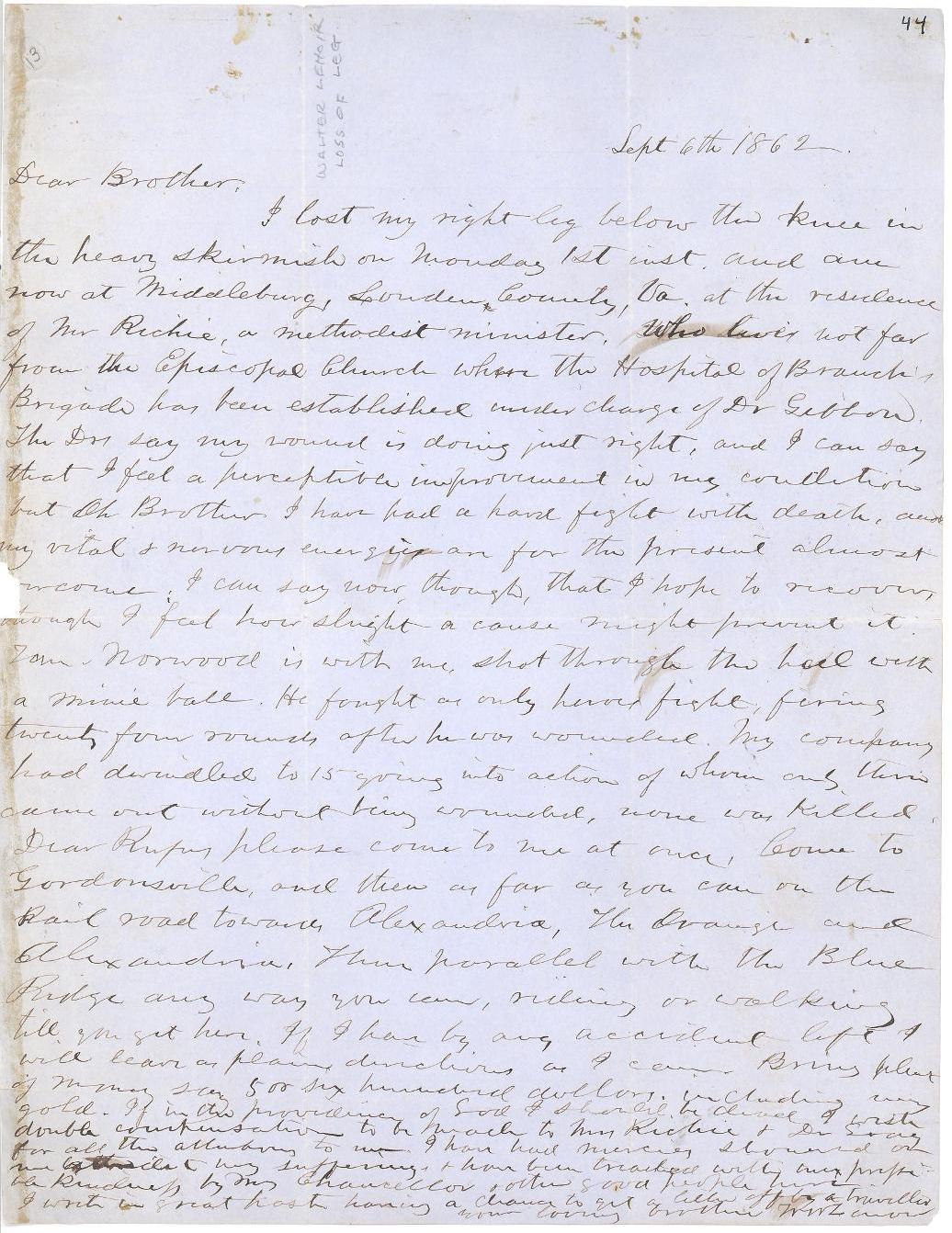 I lost my right leg below the knee in the heavy skirmish on Monday 1st inst. and am now at Middleburg, Loudoun County, Va. at the residence of Mr. Richie, a methodist minister, who lives not far from the Episcopal Church where the Hospital of Branch’s Brigade has been established under charge of Dr. Gibbon. The Drs. say my wound is doing just right, and I can say that I feel a perceptible improvement in my condition but Oh Brother I have had a hard fight with death, and my vital & nervous energies are for the present almost overcome. I can say now, though, that I hope to recover, though I feel how slight a cause might prevent it. Tom Norwood is with me, shot through the [heel?] with a minie ball. He fought as only heroes fight, firing twenty firm rounds after he was wounded. My company had dwindled to 15 going into action of wherein only three came out without being wounded, none was killed. Dear Rufus please come to me at once, come to Gordonsville, and then as far as you can on the Rail road towards Alexandria, the Orange and Alexandria, then parallel with the Blue Ridge any way you can, riding or walking till you get here. If I have by any accident left I will leave as plain directions as I can. Bring plenty of money say 5 or six hundred dollars, including [any?] gold. If in the providence of God I should be dead I wish double compensation to be made to Mrs. Richie & Dr. [Gray?] for all the attending to me. I have had mercies showered at me [?] my suffering, & have been [?] with [?] [?] kindness by Mrs. Chancellor & other good people here.

I write in great haste having a chance to get a letter off by a traveller.