12 September 1862: “The time of ironclad being ready is very indefinite. It is questionable if she will be finished for some time to come…”

Posted on 12 Sep ’12 by Biff Hollingsworth 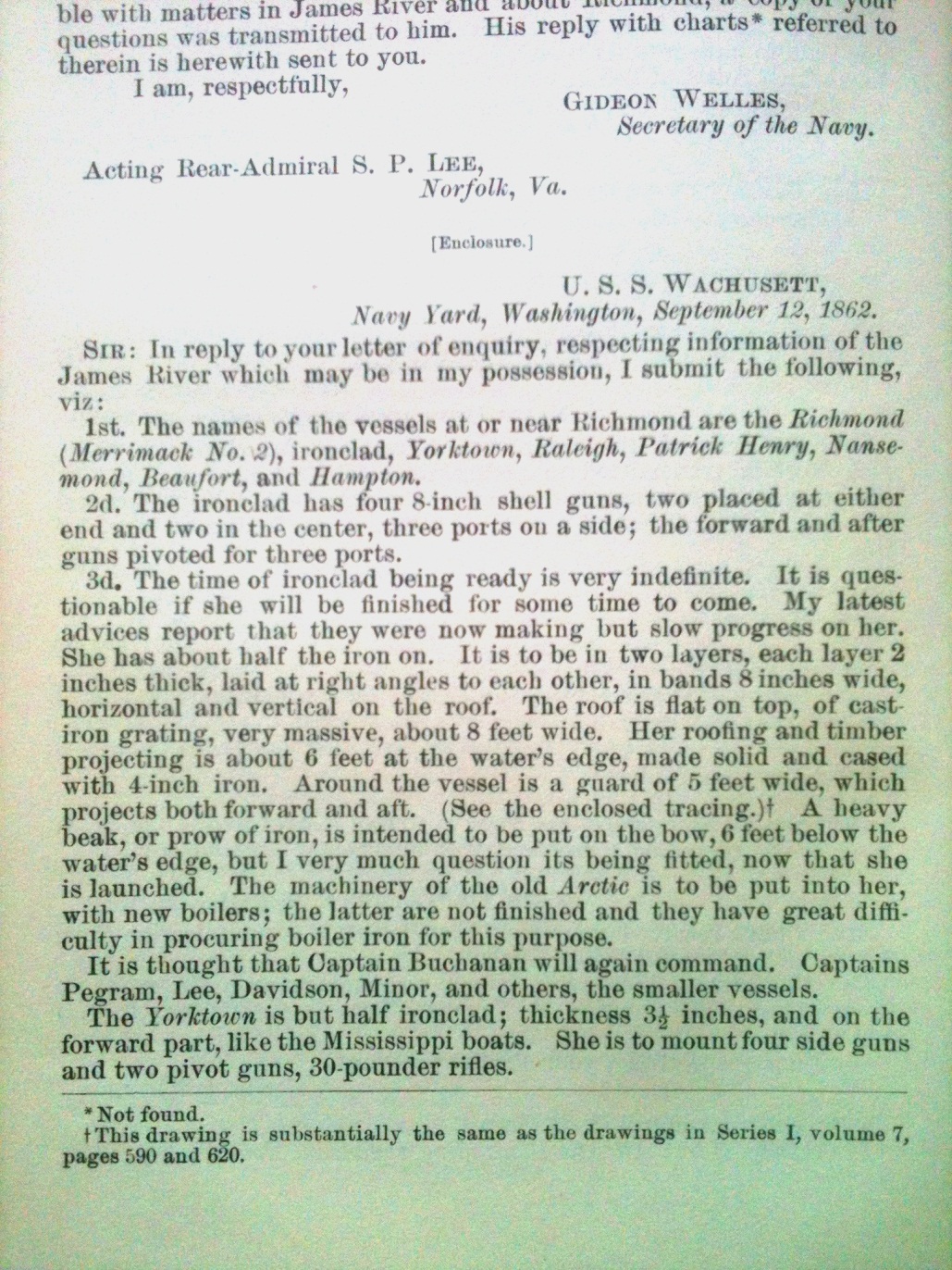 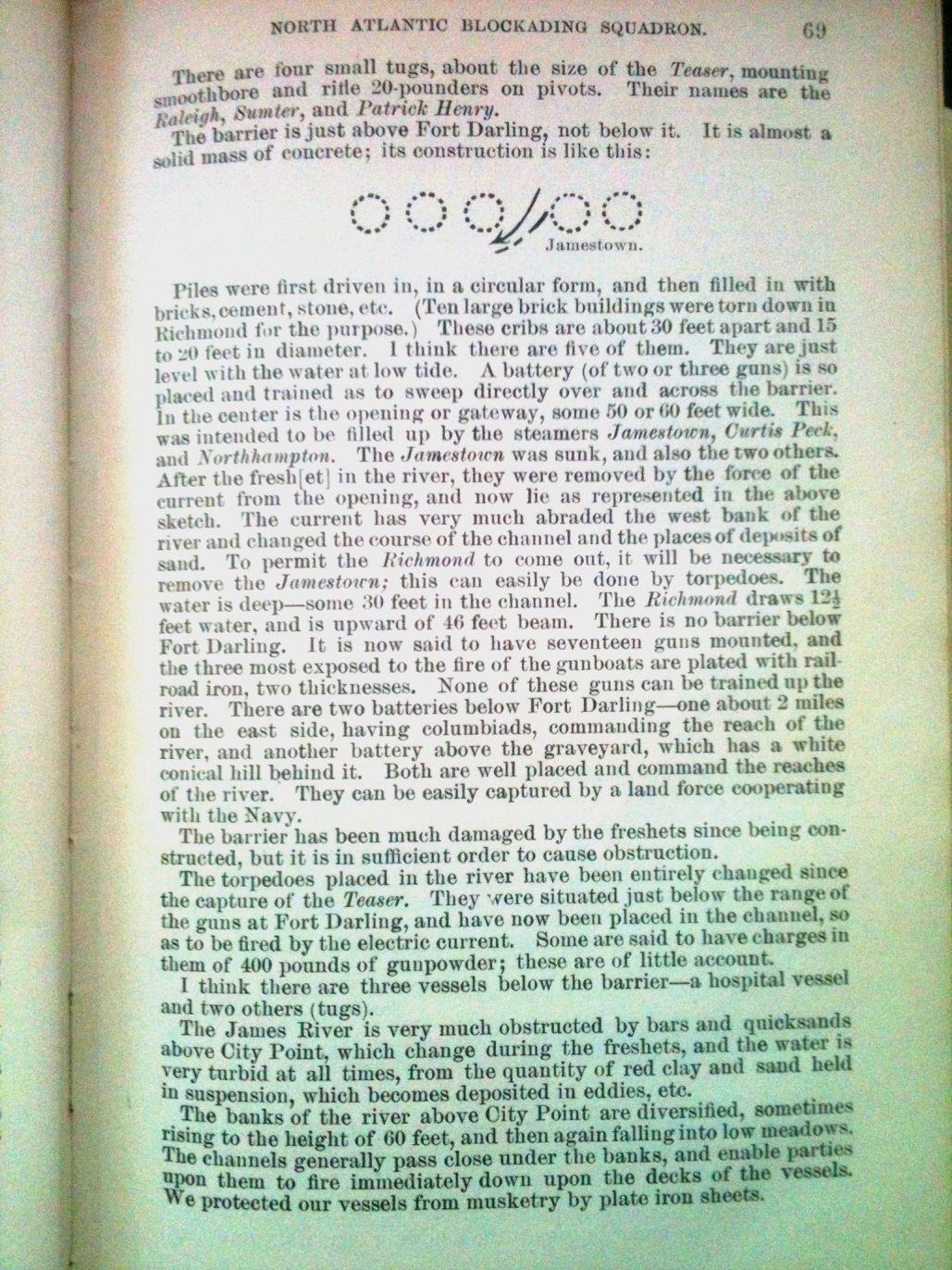 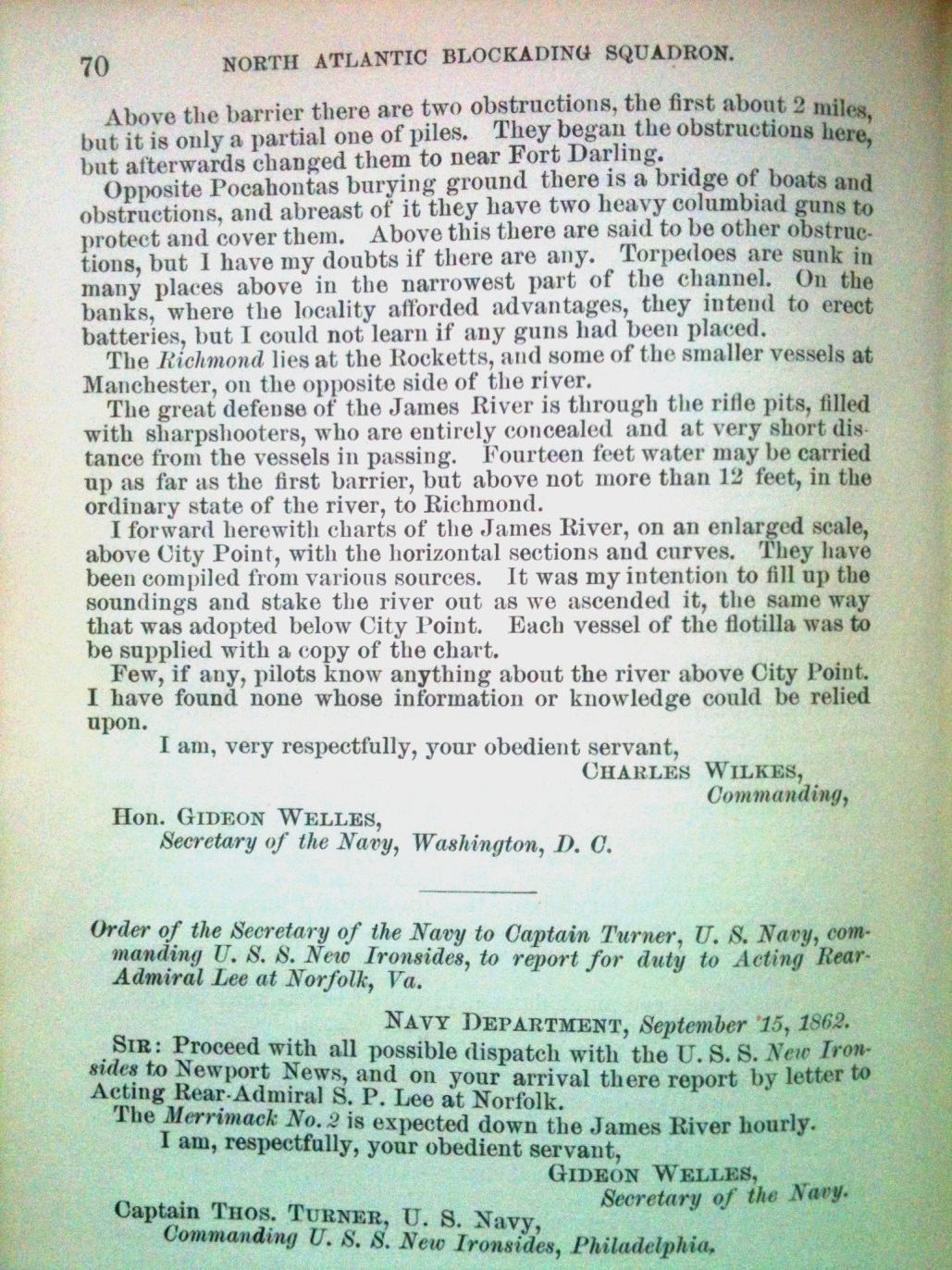 Navy Yard, Washington, September 12, 1862.
SIR: In reply to your letter of enquiry, respecting information of the
James River which may be in my possession, I submit the following,
viz:
1st. The names of the vessels at or near Richmond are the Richmond
(Merrimack No. 2), ironclad, Yorktown, Raleigh, Patrick Henry, Nanse-
mond, Beaufort, and Hampton.
2d. The ironclad has four 8-inch shell guns, two placed at either
end and two in the center, three ports on a side; the forward and after
guns pivoted for three ports.
3d. The time of ironclad being ready is very indefinite. It is ques-
tionable if she will be finished for some time to come. My latest
advices report that they were now making but slow progress on her.
She has about half the iron on. It is to be in two layers, each layer 2
inches thick, laid at right angles to each other, in bands 8 inches wide,
horizontal and vertical on the roof. The roof is flat on top, of cast-
iron grating, very massive, about 8 feet wide. Her roofing and timber
projecting is about 6 feet at the waters edge, made solid and cased
with 4-inch iron. Around the vessel is a guard of 5 feet wide, which
projects both forward and aft. (See the enclosed tracing.)* A heavy
beak, or prow of iron, is intended to be put on the bow, 6 feet below the
waters edge, but I very much question its being fitted, now that she
is launched. The machinery of the old Arctic is to be put into her,
with new boilers; the latter are not finished and they have great diffi-
culty in procuring boiler iron for this purpose.
It is thought that Captain Buchanan will again command. Captains
Pegram, Lee, Davidson, Minor, and others, the smaller vessels.
The Yorktown is but half ironclad; thickness 3 1/2 inches, and on the
forward part, like the Mississippi boats. She is to mount four side guns
and two pivot guns, 30-pounder rifles.

There are four small tugs, about the size of the Teaser, mounting
smoothbore and rifle 20-pounders on pivots. Their names are the
Raleigh, Sumter, and Patrick Henry.

The barrier is just above Fort Darling, not below it. It is almost a
solid mass of concrete; its construction is like this:

Piles were first driven in, in a circular form, and then filled in with
bricks, cement, stone, etc. (Ten large brick buildings were torn down in
Richmond for the purpose.) These cribs are about 30 feet apart and 15
to 20 feet in diameter. I think there are five of them. They are just
level with the water at low tide. A battery (of two or three guns) is so
placed and trained as to sweep directly over and across the barrier.
In the center is the opening or gateway, some 50 or 60 feet wide. This
was intended to be filled up by the steamers Jamestown, Curtis Peck,
and Northhampton. The Jamestown was sunk, and also the two others.
After the fresh[et] in the river, they were removed by the force of the
current from the opening, and now lie as represented in the above
sketch. The current has very much abraded the west bank of the
river and changed the course of the channel and the places of deposits of
sand. To permit the Richmond to come out, it will be necessary to
remove the Jamestown; this can easily be done by torpedoes. The
water is deepsome 30 feet in the channel. The Richmond draws 12 1/2
feet water, and is upward of 46 feet beam. There is no barrier below
Fort Darling. It is now said to have seventeen guns mouimted, and
the three most exposed to the fire of the gunboats are plated with rail-
road iron, two thicknesses. None of these guns can be trained up the
river. There are two batteries below Fort Darling — one about 2 miles
on the east side, having columbiads, commanding the reach of the
river, and another battery above the graveyard, which has a white
conical hill behind it. Both are well placed and command the reaches
of the river. They can be easily captured by a land force cooperating
with the Navy.
The barrier has been much damaged by the freshets since being con-
structed, but it is in sufficient order to cause obstruction.
The torpedoes placed in the river have been entirely changed since
the capture of the Teaser. They were situated just below the range of
the guns at Fort Darling, and have now been placed in the channel, so
as to be fired by the electric current. Some are said to have charges in
them of 400 pounds of gunpowder; these are of little account.
I think there are three vessels below the barrier — a hospital vessel
and two others (tugs).
The James River is very much obstructed by bars and quicksands
above City Point, which change during the freshets, and the water is
very turbid at all times, from the quantity of red clay and sand held
in suspension, which becomes deposited in eddies, etc.
The banks of the river above City Point are diversified, sometimes
rising to the height of 60 feet, and then again falling into low meadows.
The channels generally pass close under the banks, and enable parties
upon them to fire immediately down upon the decks of the vessels.
We protected our vessels from musketry by plate iron sheets

Above the barrier there are two obstructions, the first about 2 miles,
but it is only a partial one of piles. They began the obstructions here,
but afterwards changed them to near Fort Darling.

Opposite Pocahontas burying ground there is a bridge of boats and
obstructions, and abreast of it they have two heavy columbiad guns to
protect and cover them. Above this there are said to be other obstruc-
tions, but I have my doubts if there are any. Torpedoes are sunk in
many places above in the narrowest part of the channel. On the
banks, where the locality afforded advantages, they intend to erect
batteries, but I could not learn if any guns had been placed.
The Richmond lies at the Rocketts, and some of the smaller vessels at
Manchester, on the opposite side of the river.
The great defense of the James River is through the rifle pits, filled
with sharpshooters, who are entirely concealed and at very short dis-
tance from the vessels in passing. Fourteen feet water may be carried
up as far as the first barrier, but above not more than 12 feet, in the
ordinary state of the river, to Richmond.
I forward herewith charts of the James River, on an enlarged scale,
above City Point, with the horizontal sections and curves. They have
been compiled from various sources. It was my intention to fill up the
soundings and stake the river out as we ascended it, the same way
that was adopted below City Point. Each vessel of the flotilla was to
be supplied with a copy of the chart.
Few, if any, pilots know anything about the river above City Point.
I have found none whose information or knowledge could be relied
upon.
I am, very respectfully, your obedient servant,
CHARLES WILKES,
Commanding