18 September 1862: “and we hear that the Yankees are dying by hundreds in New Orleans, this last is an awful thing to rejoice over, and yet such the fate of a bloody war and such are the feelings which it engenders, even in the merciful heart of a woman.” 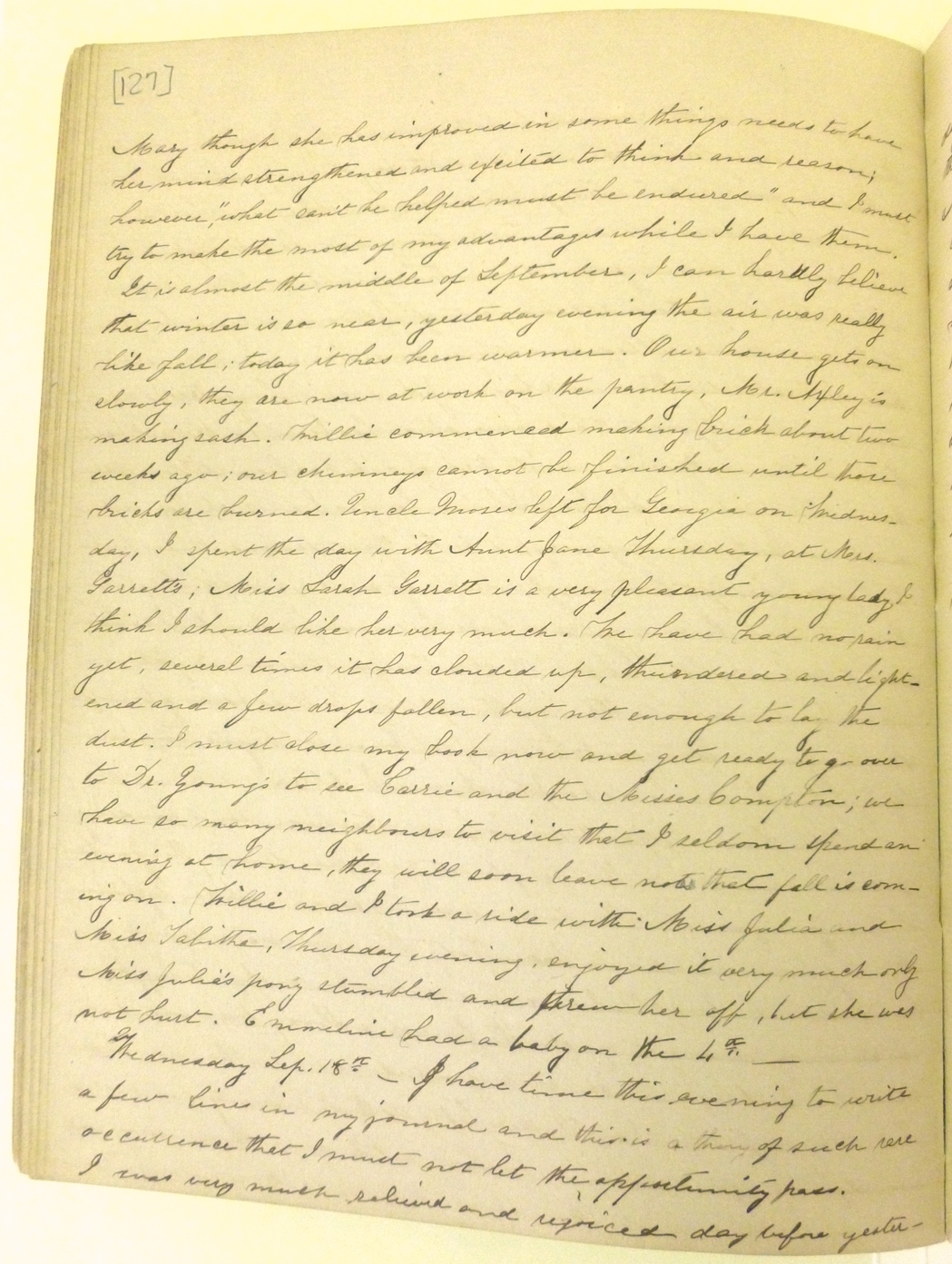 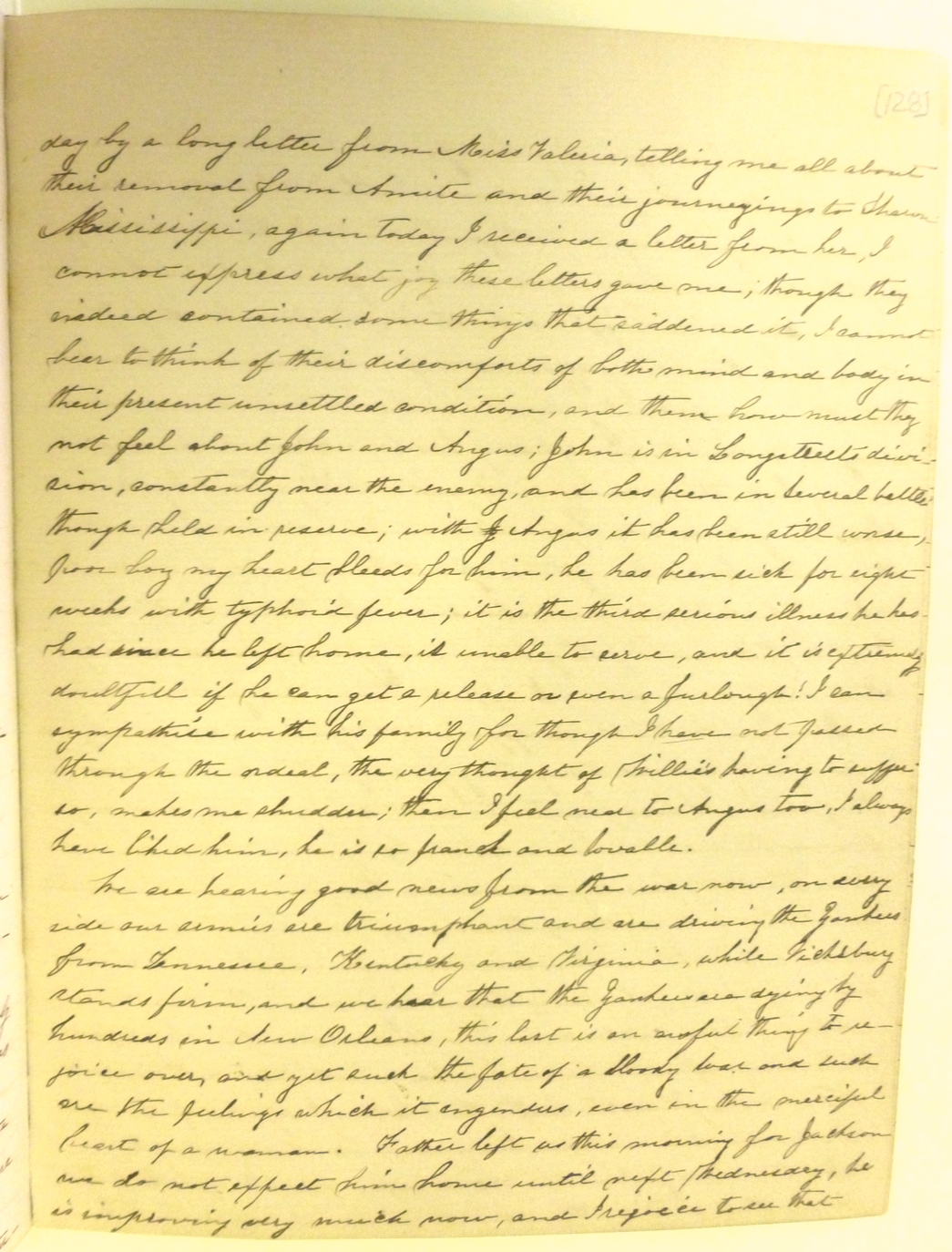 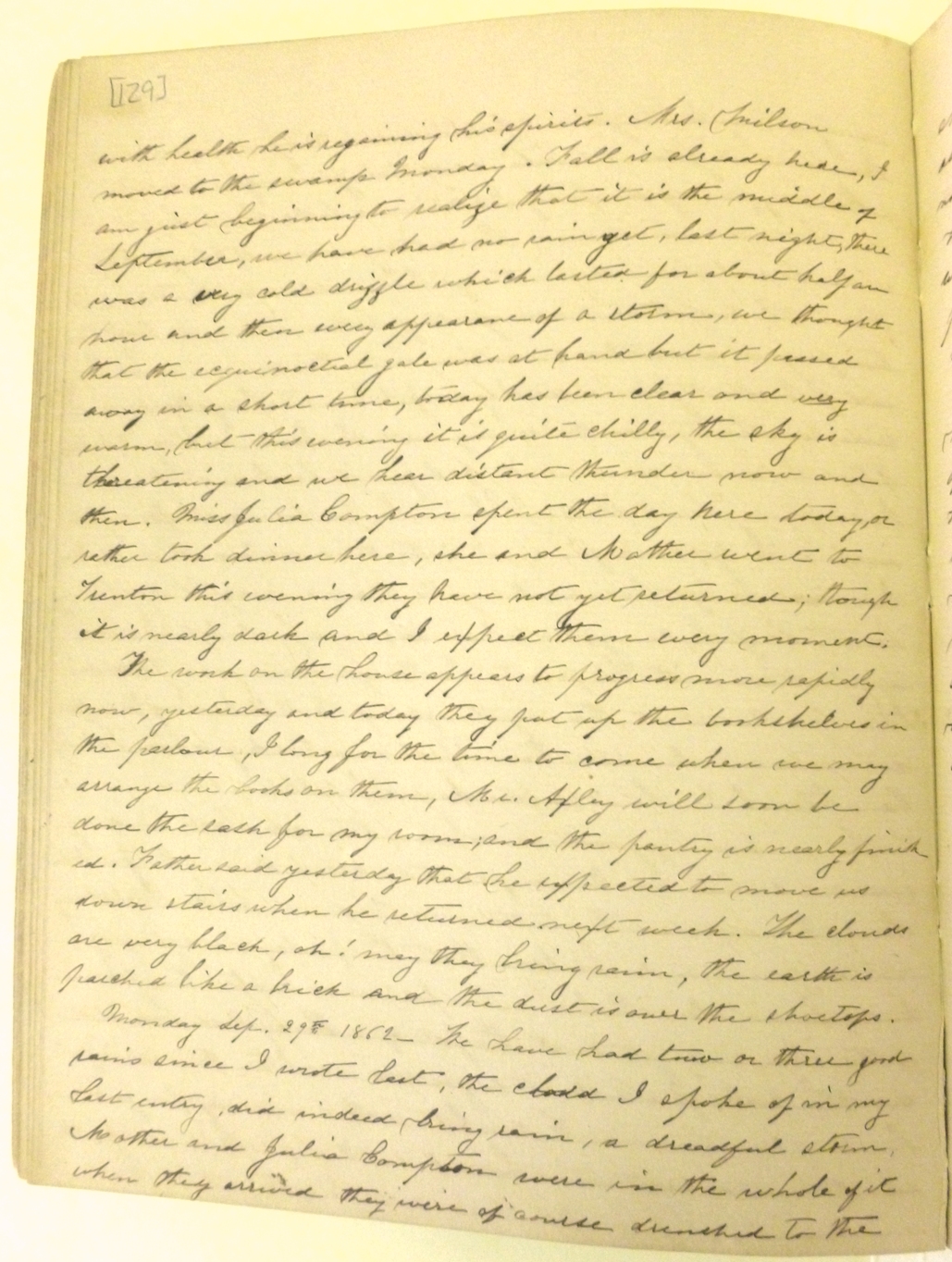 I have time this evening to write a few lines in my journal, and this is a thing of such rare occurrence that I must not let the opportunity pass. I was very much relieved and rejoiced day before yesterday by a long letter from Miss Valeria, telling me all about their removal from Amite and their journeyings to Sharon Mississippi, again today I received a letter from her, I cannot express what joy these letters gave me, though they indeed contained some things that saddened it, I cannot bear to think of their discomforts of both mind and body in their present unsettled condition, and then how must they not feel about John and Angus; John is in Longstreet’s division, constantly near the enemy, and has been in several battles, though held in reserve; with Angus it has been still worse, poor boy, my heart bleeds for him, he has been sick for eight weeks with, typhoid fever; it is the third serious illness he has had since he left home, is unable to serve and it is extremely doubtful if he can get release or even a furlough! I can sympathize with his family, for though I have not passed through the ordeal, the very thought of Willie’s having to suffer so, makes so shudder; then I feel near to Angus too, I always have liked him, he is so frank and lovable.

We are having good news from the war now, on every side our armies are triumphant and are driving the Yankees from Tennessee, Kentucky, and Virginia, while Vicksburg stands firm, and we hear that the Yankees are dying by hundreds in New Orleans, this last is an awful thing to rejoice over, and yet such the fate of a bloody war and such are the feelings which it engenders, even in the merciful heart of a woman.

Father left us this morning for Jackson, we do not expect him home until next Wednesday, he is improving very much now, and I rejoice to see that with health he is regaining his spirits.

Mrs. Wilson moved to the swamp Monday. Fall is already here, I am just beginning to realize that it is the middle of September, we have had no rain yet. Last night there was a very cold drizzle which lasted for about half an hour and then every appearance of a storm, we thought that the ecquinoctial gale was at hand but it passed away in a short time, today has been clear and very warm, but this evening it is quite chilly, the sky is threatening and we hear distant thunder now and then. Miss Julia Compton spent the day here today, or rather, took dinner here, she and Mother went to Trenton this evening, they have not yet returned; though it, is nearly dark and expect them every moment.

The work on the house appears to progress more rapidly now, yesterday and today they put up the bookshelves in the parlour, I long for the time to come when we may arrange the books on them, Mr. Axley will soon be done the sash for my room; and the pantry is nearly finished Father said yesterday that he expected to move us downstairs when he returned next week. The clouds are very black, oh! may they bring rain, the earth is parched like a brick, and the dust is over the shoetops.